While visiting her sister in buzzing German metropolis Berlin, Oklahoma City Ballet principal dancer Miki Kawamura couldn’t resist the opportunity to see the facilities of one of the largest ballet companies in Western Europe with her own eyes.

Kawamura, a native of Japan, was beyond impressed with what she saw from Berlin State Ballet, the capital city’s principal ballet company. The German company is nearly three times the size of OKC Ballet. While Kawamura loved what she saw in Europe, she was not envious of what they could provide.

“Their building is incredible,” she said, “but comparing their building to [OKC’s], we’re not losing at all.”

Though the facility — now known as Susan E. Brackett Dance Center — was only acquired by OKC Ballet within the last year, the architecture of the building is so unique and elegant that one might guess it was expressly built to house and showcase an elite dance company.

The barrel-shaped dance center, found at 6800 N. Classen Blvd., stands out for its size and large amount of glass. According to local legend, the building was commissioned by late former Chesapeake Energy Corporation co-founder and chairman Aubrey McClendon as an elaborate wine cellar. While at some point it was used to house his wines, the building’s initial intended purpose is unclear. Before McClendon’s death in 2016, he was a prolific wine collector. Forbes estimated in September 2016 that McClendon had accumulated enough wine at the time of his death to enjoy a bottle each day for 12 years.

The grandeur of the current Brackett Center’s design is nowhere more apparent than on the expansive floor of its main dance studio, spread as wide as a full-size basketball court. Its west-facing arch wall is almost nothing but windows, flooding the dance floor with warm natural light. The rehearsal space is actually larger than the Civic Center Music Hall stage on which OKC Ballet usually performs.

Robert Mills, the company’s artistic director for the last 10 years, said OKC Ballet’s new home only became a reality through generous gifts and support from members of the community.

“There’s something to be said for working somewhere where you feel the support of the community you’re doing it for,” Mills said. “It keeps you going.”

Still, the center isn’t quite a dance utopia — not yet, anyway. Renovations to the facility are ongoing, and evidence of the work being done is apparent in the building’s basement floor. Steel beams and concrete are shuffled into the building for foundational work. The immortal sounds of classic composers like Pyotr Ilyich Tchaikovsky often fill the center, but for now, the music of industrial drills and heavy construction equipment occupies the facility almost as often.

In the midst of an exceptionally chilly winter, many of the dancers have noticed that cold air from the outside gets funneled from the front door, down the straight hallway and directly into the main studio. Ballet leotards are not known for providing warmth.

Mills said the upgrade is sharp. The fact that the company so quickly moved into the Brackett Center mid-renovation should say something about the state of its last headquarters.

“I’m in a temporary office right now,” Mills said, “but at least it doesn’t leak.” 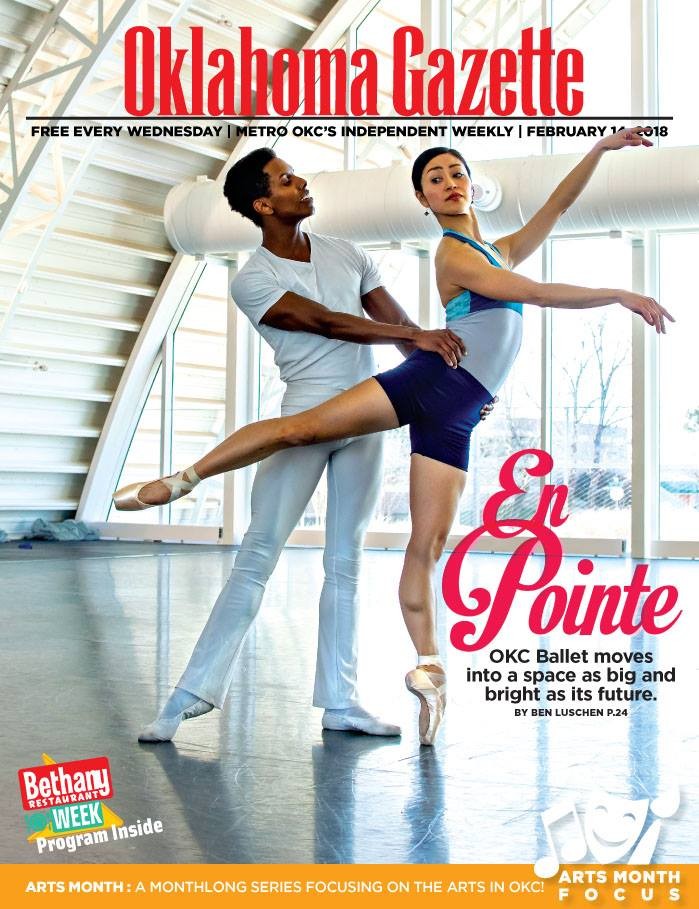 OKC Ballet still uses its former studio, about half a mile north from the Brackett Center on Classen Boulevard, but now as a costuming and storage annex. Ownership of the building was gifted to the ballet by Chesapeake last year.

When Mills was hired by OKC Ballet a decade ago, one of his earliest goals was to find an improvement over the company’s cramped studio and office space.

“Immediately, I said to the board and the community that the building we were currently in was just not to the level of what is going on with other companies,” he said. “Even in the middle of the United States, it’s not up to par.”

Through many years, OKC Ballet remained in the same studio, but the ball finally got rolling on a new home in December 2016, when the company received a large financial gift from the family of former board member Susan Brackett (for whom the new headquarters is now named). The donation fueled a capital campaign that gathered just under $5 million in six weeks.

In February 2017, Chesapeake put the building that would become the Brackett Center up for auction. At the time, it had most recently housed American Energy Partners Fitness Center. OKC Ballet was the highest bidder, purchasing the facility for $4.1 million.

The company officially received keys to the new building Feb. 15, 2017, with the first dance rehearsals beginning there in the summer. Money left over from the auction was used to immediately begin renovations.

OKC Ballet’s 18-month capital campaign, known as the Turning Pointe campaign, is still underway to enhance its renovation efforts. The campaign concludes sometime this summer and has raised $8.9 million toward its $9.1 million goal.

The Turning Pointe campaign got a significant boost in October, when Kirkpatrick Family Fund announced a $2 million donation. The gift was made in part by the charitable trust of Christian K. Keesee, grandson of John Kirkpatrick, who founded Oklahoma City Civic Ballet (which became Ballet Oklahoma and, later, OKC Ballet) with Native American Oklahoma prima ballerina Yvonne Chouteau in 1963.

“That was a meaningful thing to [Keesee] to try and honor what was important to his own family many years ago and allow that legacy to live on in other ways,” Mills said.

The Brazilian dancer is in his first season with the company after arriving from Milwaukee Ballet. He knew a couple of former OKC dancers who encouraged him to attend an audition in Chicago, where he met Mills for the first time.

When it became clear that he might have a future in Oklahoma, Batista did all the research he could on his prospective city and its ballet company.

“The first thing I saw when I opened the website was the front of the new building,” Batista said. “I could see the architecture, and I was just like, ‘Wow! That’s fantastic.’”

The Brackett Center has become one of OKC Ballet’s most powerful recruitment tools for attracting the world’s most talented dancers and choreographers. Batista said he was also impressed by the company’s diverse repertoire, which often includes a mix of classic, contemporary and original productions.

Generally speaking, ballet’s popularity in the city is near an all-time high. The company’s annual production of holiday stalwart The Nutcracker, for example, has become one of the most popular renditions of the show in a multi-state region.

Kawamura, who is in her eighth OKC Ballet season, has noticed show attendance swell through her tenure in the city.

“That is obvious, even from the stage,” she said.

The biggest change Kawamura noticed in eight years is the company’s sheer number of dancers. There are 31 full-time dancers today, compared to 15-20 when she started. She has also seen artist enthusiasm soar since moving into the Brackett Center.

“I can feel the energy change from everyone,” she said. “The atmosphere among the dancers is so much better.”

Newness at OKC Ballet is not limited to the sterling Brackett Center. Early this month, the company announced the hiring of Jo Lynne Jones as its John Kirkpatrick executive director, a position endowed through the Kirkpatrick Family Fund gift.

Jones comes to OKC Ballet after nearly 17 years working in different roles for Infant Crisis Services. The former radio DJ and news anchor also spent her childhood and teenage years dancing ballet. She is excited to ride the company’s wave of positive momentum.

“I truly feel like it is on the precipice of taking off,” Jones said. “When you meet the dancers who are from all over the world, they have specifically come to Oklahoma City because of the reputation of the company and the reputation of [artistic director] Robert Mills.”

Mills will continue leading the creative direction of OKC Ballet. Jones will use her experience in business management, fundraising and communications to ensure the company builds a firm foundation to support growing aspirations.

“What they needed was someone who could come in and take care of the business side,” she said.

Before Jones joined OKC Ballet, the company had spent more than 10 months without an executive director, guided mostly by Mills and its board of trustees.

“It is a testament to that board — how plugged-in they are, excited they are and how passionate they are about the ballet — that they have managed to hold a capital campaign, purchase a new facility and get it remodeled while doing it themselves,” Jones said. “It’s pretty stunning.”

In that period of flux, the board managed not only to maintain the company, but also grow it. The company’s past year has Jones, Mills and nearly everyone at OKC Ballet excited about what the future could hold.

Before Katherine Bolaños was dancing with one of the nation’s premier ballet companies, the Aspen Santa Fe Ballet principal dancer was a hometown member of Ballet Oklahoma.

Bolaños visited her alma mater in October during OKC Ballet’s opening of Swan Lake, its first full attempt at the grand ballet cornerstone in four years and only its second ever as a company. After the show, Mills remembers Bolaños saying she had never before seen anything like that production in OKC.

“That was not only what she was seeing on the stage,” Mills said, “but the reaction and the amount of people.”

The artistic director is thrilled with the company’s recent successes, but he is not yet ready to detach short-term ambitions from appropriate regional expectations.

“You don’t want to do things that cannot be supported by the community,” he said. “That’s where you go into debt. It’s a fine line that you walk.”

Still, Mills believes OKC Ballet has the potential to do more within the size of its community. He is excited to meet with Jones and the board to talk about what the company should do in the future.

“There are tons of possibilities,” he said. “I could talk about a satellite location, especially as big as this metropolitan area is. I could talk about the types of ballets we could do. But I think that’s something we’re going to have to develop together.”

Enthusiasm for the future — tempered or not — is in full supply at Brackett Center. Batista said it is realistic to expect some bumps along the way, but it’s hard to stand in the main studio’s natural glow without feeling similarly bright.

“It’s a long process,” he said. “At times, it could be painful, like opening the door and the cold is coming in. But looking at the future, who can complain?” 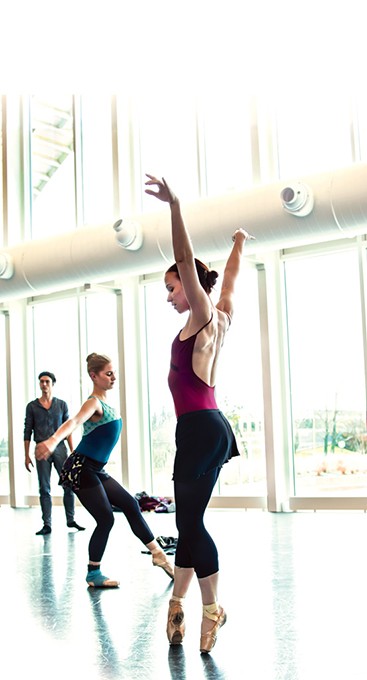