Contrary to the consumerist notion of the season, nothing about the holidays is monolithic. As more people from different countries and religions make Oklahoma City their home, they bring with them ideas and rituals that make life richer.

Even then, individual cultures and belief systems contain multitudes. Variations exist in the way people celebrate Christmas, Kwanzaa and Hanukkah that scarcely resemble conventional ideas about any of the holidays, and these annual celebrations are taking place among our friends, neighbors and co-workers this season. 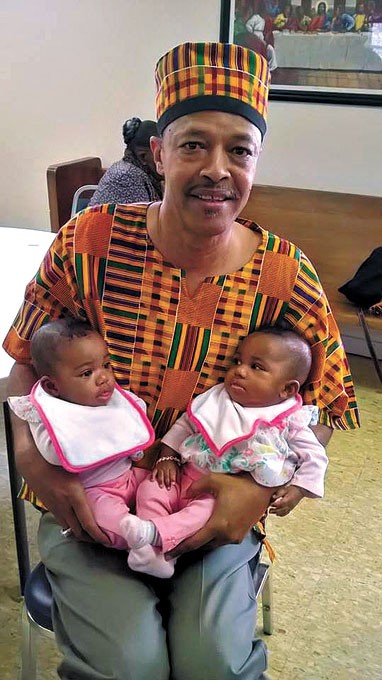 It is not Michael Washington’s goal to replace Christmas but to focus the local black community on promoting its own heritage, culture and economic development.

The concept of Kwanzaa is taught to many children during the holiday season, though often without much substantive depth. Washington, a social and political activist in Oklahoma City, said most people have only a vague understanding of the seven-day African-American holiday that runs Dec. 26-Jan. 1 each year.

Kwanzaa (taken from a Swahili phrase meaning “first fruits of the harvest”) was first observed in the 1966-67 holiday season. Maulana Karenga, an African-American author and academic, founded the celebration as an opportunity for black Americans to celebrate their African culture and ancestry.

Many, but not all, of the contemporary black families who observe Kwanzaa also celebrate Christmas.

Washington has personally been observing Kwanzaa since 1977. He said while the Christmas and holiday season is a great financial benefit to large corporations and consumerism, Kwanzaa is a time to for black people to invest in their own communities.

“It’s an African-American holiday that is designed not necessarily to offset the Christmas season,” he said, “but to show, ‘OK, this money is being spent on Christmas and things, but what are you doing for yourself?’ Self-economics, self-preservation, self-awareness.”

Washington is founder of the nonprofit Empower People, Inc., a group that caters to a wide variety of community needs. The organization has hosted a Kwanzaa celebration for the past seven years.

“We’re a multicultural group, and we want multicultural people to come in so they can learn and tell their children or whoever what’s going on,” Washington said. “It’s not just black folks; it’s anybody that feels like they need to know about us.”

The most important part of Kwanzaa is the acknowledgement of its seven core principles, known collectively as Nguzo Saba. Each day in the weeklong observance stands for one of the principles, which include unity, self-determination, responsibility, cooperative economics, purpose, creativity and faith.

Gifts are often given, and revelers join in a communal feast called karamu. As each day passes, observers light a new candle on the traditional kinara, similar to the menorah used in Jewish Hanukkah celebrations.

Washington said black attendees to the community Kwanzaa celebration are encouraged to dress in traditional garb. Those who would like to share a statement of Kwanzaa — or anything about black culture — are welcome to do so.

“If you can come in and talk about black history with us, well, that’s what Kwanzaa is,” Washington said. “It’s African-American culture and heritage.”

Washington said he commonly hears Kwanzaa called a “black thing” or that it somehow goes against the fundamentals of what the country was founded upon. His goal with hosting a community celebration is to help people realize the true meaning of the observance.

“It’s about trying to erase the racism that raises its ugly head every time you turn the TV on,” he said.

While Empower People’s community Kwanzaa celebration is limited to just one day due to funding, Washington is hoping to connect with other city organizations that would like to cooperatively join forces to host a full seven days.

Those who would like to know more about why Kwanzaa is celebrated are encouraged to do their own research online. Or, better yet, join Washington and the community for a night of togetherness and understanding.

“I want you to come together with me,” he said. “Let’s eat. Let’s celebrate the fruits of fresh harvest.” 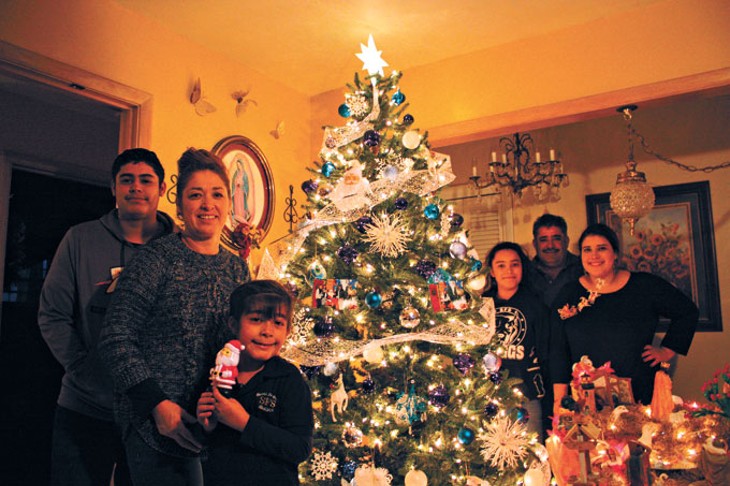 In south Oklahoma City, the Chavez home shines bright with thousands of Christmas lights during the holidays. The brilliant yet warm lights welcome the Chavez’ family and friends to their beautifully decorated home for the season — even the couple’s youngest daughter decked her room with garland and a nutcracker toy soldier.

In the living room, a Christmas tree stands tall and regal next to the nacimiento, the main attraction. The word “nacimiento” means “nativity scene” in Spanish; in the tradition, Mary and Joseph are joined by shepherds, angels and animals around the miracle that took place in a Bethlehem stable: the birth of Jesus Christ.

Once the nacimiento comes out for the holiday season, the questions begin from the couple’s four children, explained Sanjuana Chavez.

“All of our kids are ready,” Sanjuana said. “Every December, they say, ‘When are we going to do this? Are we going to go to my grandmother’s house?’”

The questions hint at Las Posadas, a well-known tradition rooted in the nativity story and celebrated in counties like Mexico and Guatemala. For the Chavez family, along with Sanjuana’s parents and her eight siblings and their families, Las Posadas is celebrated on Christmas Eve when the family comes together to celebrate the birth of Jesus Christ with song and prayer. It’s a tradition that began when Sanjuana and her siblings were growing up in Mexico and continued in Oklahoma when the family arrived decades ago.

Las Posadas is a way to share and celebrate the family’s Christian faith and heritage as well as come together as a family on Christmas Eve, explained Sanjuana.

In this tradition, Mary and Joseph’s difficult journey from Nazareth to Bethlehem and their search for a place to stay is re-enacted. Posada means “inn” in Spanish. At Sanjuana’s parent’s home, Las Posadas begins with Mary and Joseph, played by two family members, leading a procession of other family members carrying candles. Outside the house, Mary and Joseph sing a song in Spanish, asking to enter, while the family inside responds singing the part of an innkeeper saying that there is no room. The song switches back and forth a few times until finally, an innkeeper welcomes Mary and Joseph.

Once inside, the festivities begin as Mary and Joseph take their place with baby Jesus, a small porcelain figure that rests in a manger as an angel looks on. A line forms with family members on their knees to greet and welcome Jesus, the newborn king. The youngest children represent pastorelas (Spanish for “shepherds”). During this time, the devil works the room with a trident, poking family members as they sing praises.

The celebration continues as the family enjoys their Posada dinner, which includes Hispanic dishes like tamales and a special punch made with typical Mexican fruits. After dinner, the family begins striking a piñata with seven corners, each representing the Seven Deadly Sins. The beating of the piñata symbolizes the “destruction of evil and the triumph of good,” explained the Chavez’ eldest daughter Samantha.

While other Oklahoma City families of Mexican and Guatemalan heritage celebrate Las Posadas at Christmas with a feast and a piñata, the Chavez children explained they have yet to meet another family who celebrates by re-enacting Mary and Joseph’s journey.

“We have been told we are a unique family because of the way we all get together and celebrate,” Samantha said. “We get requests from people to join. We’ve never shut anyone out. We are a big family, but we’ve also invited family friends and people who want to be there.”

As the children share about past Las Posadas, Sanjuana beamed with pride over how her three daughters and son shared the Christmas and expressed eagerness to continue the tradition for the next generations.

Neric, the couple’s son, explained it was an honor to be selected for the part of Joseph last year. Recalling past Las Posadas reminded him and his sisters of what the true meaning of Christmas really is and the blessing that is the love of a family.

“We can all celebrate in unity,” Neric said. “With our family, we all don’t live together and we only see each other every so often. The time we spend together on Christmas Eve and Christmas is cherished, and we have fun.” 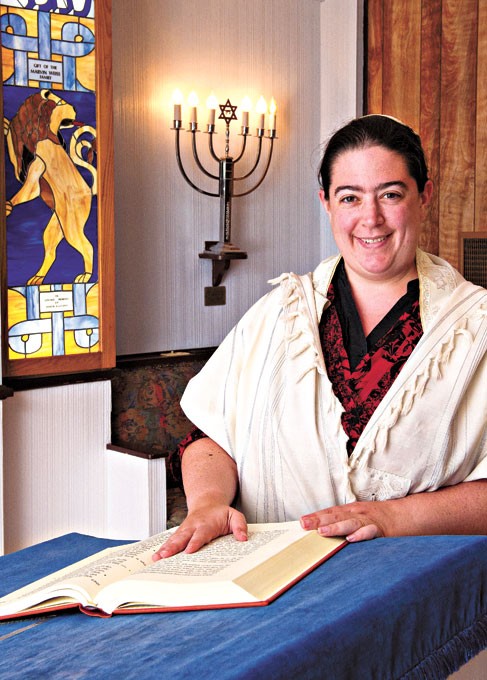 As the Jewish faith celebrates Hanukkah Dec. 12-20, the commemoration of a single day’s worth of oil keeping the menorah in Jerusalem’s Holy Temple lit for eight days following Judah the Maccabee’s defeat of the Syrian-Greeks, it is quite customary to enjoy food fried or baked in oil.

For Abby Jacobson, rabbi at Emmanuel Synagogue, quite often, this tradition meant entirely too many latkes (fried potato pancakes). After she met her husband while studying in Israel, she realized that the holiday didn’t have to be all latkes all the time, and it has led to an interesting family tradition.

Jacobson’s husband Juan Mejia is also a rabbi. Mejia grew up in Bogotá, Colombia, intending to become a monk until he discovered Jewish heritage, according to a 2013 story in The Oklahoman. Mejia is now coordinator for Be’chol Lashon, a San Francisco-based nonprofit that reaches out to underrepresented areas to help people connect to Judaism.

While the couple met and married in Israel, Jacobson, who grew up on a cattle ranch as one of the few Jewish families in her central Florida county, said she was exposed to a “a patchwork quilt of Jewish traditions.”

“I was exposed to people who are open enough about their Judaism to say ‘I’m bored with latkes,’” Jacobson said. “Growing up, we’d cling to things like latkes as symbols of a larger Jewish community that we didn’t have access to.”

The family’s new tradition means they still eat latkes, but only once during the eight-day celebration. They fry a different food every night, honoring Mejia’s Colombian heritage by having buñuelos, a cheese-filled dough treat similar to a hushpuppy, one night and egg rolls handmade by the couple’s children another night.

“It makes Hanukkah richer than it was before,” Jacobson said of the new family tradition.

As president of Interfaith Alliance of Oklahoma, Jacobson invites friends and family from all backgrounds to celebrate in their home.

“The intensive ritual part is only five minutes long, so the rest of the time, it’s about spending time with each other,” she said. “We try to include as many people as we can because it’s fun for us and everyone.”

Oklahoma City’s largest Hanukkah ceremony began with a menorah lighting ceremony yesterday downtown. The ceremony has been sponsored by Chabad Community Center for Jewish Life and Learning for the last five years.

Rabbi Ovadia Goldman said the ceremony is one he looks forward to every year as a symbol to find commonality between faiths.

“The menorah is a symbol of the first historical fight of the nation of our people for freedom from oppression and tyranny,” Goldman said. “As an American citizen, I find it to be an amazing thing that we’re able to get together and celebrate.”

Over the holiday, Chabad sponsors a menorah car that drives to communities across Oklahoma with smaller Jewish populations to bring cheer to families.

“If there is anyone in the Jewish community that needs materials like menorah candles or instructions or would like one of the rabbinical interns to be there to celebrate anywhere in Oklahoma, we’d be happy to help,” Goldman said.