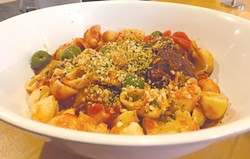 In a 2013 article in The Oklahoman, Saturn Grill owner and chef Joseph Royer is quoted as saying that he eats meat once per day.

Five years later, Royer estimates 70 percent of his meals are plant-based. As Royer’s own tastes have changed, so has the menu at Saturn Grill, 6432 Avondale Drive.

After a remodel in 2014, Royer began a menu overhaul that has slowly progressed, and now the popular Nichols Hills location has a nearly 50/50 split between meat and vegetarian items.

Royer said he made the switch because the city didn’t have an abundance of vegetarian and vegan cuisine.

“I see quite often on social media that people thank us for having so many vegetarian and vegan options,” Royer said. “I know the interest is there and it is growing. We’ve garnered loyalty from people that live that lifestyle, and really that’s what Saturn Grill is, a lifestyle brand.”

Royer elaborated on the brand as a place for someone who wants to eat healthy but doesn’t subscribe to a strict diet. In some ways, it felt like Royer was speaking about me.

Like Royer, I’ve found myself eating less and less meat the last few years. Don’t get me wrong; I have a life’s goal to find the ultimate chile verde carnitas, but I try to eat meat about four meals a week. I’ve found that it’s a much more healthy mentality to approach eating meat as a treat rather than something that has to be with every meal.

Specifically for our health and wellness issue, I wanted to review a few vegetarian dishes at Saturn Grill that maybe you, a loyal reader and omnivore, have wanted to try but were waiting for feedback.

Over a few visits, I worked my way through the menu that includes sandwiches, pizzas, salads, pasta and entrees. The item I was most curious about was the vegan meatball pasta ($9.95).

Royer, a trained chef and alum of Kurt Fleischfresser’s famed apprenticeship program, is also the executive chef and partner for The Metro Wine Bar & Bistro, 6418 N. Western Ave. Royer develops each recipe on the menu. The meatballs are made using vital wheat gluten, which mimics the chewiness of meat, and soy protein, which gives the meatball a textural component.

I expected the meatballs to be drier like a veggie patty made from beans and vegetables. I was not prepared for a juicy and rich meatball. You could’ve blindfolded me and told me it was a blend of pork and beef and I would’ve believed you. 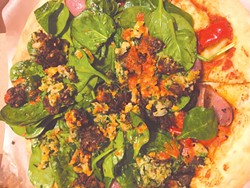 “They’re convincing for sure,” Royer said as he remembered a time when a patron wanted to double-check that the meatballs really were, in fact, meat-free because he had to follow doctor’s orders. “He said he was so happy to find a filling meal without meat.”

The best bites of the dish came from pairing the saltiness of the green Castelvetrano olives, the meatball and the spicy tomato sauce. In the past, I’ve been a fan of Saturn’s roasted chicken tortellini ($9.95), which tops cheese tortellini with pesto cream, spinach, sun-dried tomatoes and roasted chicken.

The pesto came calling for me again with the vegetarian mushroom lasagna ($11.95) because Saturn does something I haven’t seen. They put pesto in the ricotta layers between noodles. I found it a nice touch for a dish, even the vegetarian variety that is on a ton of menus in the city.

When you Google Saturn Grill, it comes up listed as a pizza restaurant, which is something Royer has noticed and finds amusing.

In fact, pizzas constitute the smallest portions of sales of any of Saturn Grill’s menu sections. Royer said its 12 sandwiches sell more than the rest of the items on the menu combined. I think a lot of that has to do with Saturn Grill’s flatbread, which is cooked from dough with every order. My personal favorite is the roasted chicken sandwich ($9.95) with Swiss cheese, tomato, mixed greens and honey mustard.

Since the sandwiches are so popular, I decided to zig as everyone else is zagging for my final order of the review. I ordered The Brogan Vegan pizza ($9.95), which tops its crust with tomato sauce, roasted red bell peppers, red onion and Portobello mushrooms. The pizza is baked and then finished with spinach, falafel and spicy red pepper sauce.

As far as pizzas go, I can see why it’s the least popular menu item at Saturn Grill. The dough was thin, but still soft and chewy. I would’ve preferred a crispier crust, but the rest of the ingredients were very good, highlighted by the crumbled-up falafel.

Royer said he spent five years perfecting the falafel recipe, finally settling on a recipe inspired by the Lebanese version of the ubiquitous fried chickpea ball. Royer opts for a coarse chop on parsley, leaving the stem on for extra crunch and adding onion, garlic and spices.

The Nichols Hills Saturn Grill remains the flagship, as ancillary locations on Memorial Road and Walker Avenue have closed in recent years, but business is doing well. Royer said Saturn Grill approaches 400 customers per day, and I certainly understand the appeal.

“I definitely think that there is nothing else like us in town,” Royer said. “It’s nice to offer a unique product in the city that people seem to enjoy.”

What works: Fresh flatbreads and vegan meatballs are so good that you don’t want meat.

What needs work: The thin pizza dough needs to be crispier.

Tip: Don’t forget about its desserts and entrees.