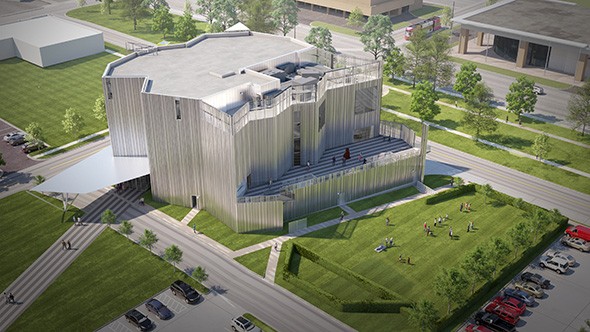 After months of construction delays caused by Oklahoma’s notoriously unpredictable

weather, Oklahoma Contemporary Arts Center is ready to reopen in its new downtown location with an exhibition inspired by another of the state’s signature features.

“Literally nothing in the current exhibition would we have really been able to
support in our previous space.”
—Jeremiah Matthew Davis tweet this

“We began to think and contemplate about the uniqueness of this place, of the space, of the built environment and the natural environment in our area,” Davis said, “and he began to think about a building that would reflect the ever-changing nature of the Oklahoma sky as well as provide a canvas for beautiful sunsets and sunrises here.”

Davis said curatorial and exhibitions director Jennifer Scanlon was also “struck by the quality of light in Oklahoma,” when she visited the state to interview for the job and began imagining an exhibition featuring “works that are literally constructed of light, using light as a medium; works that create an environment or a sense of place through the use of light.” 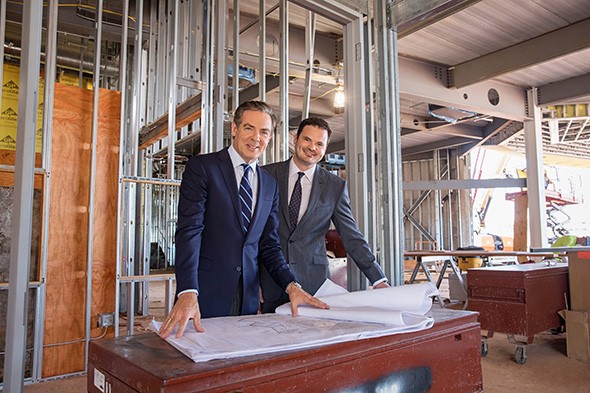 “There’s been a lot of shows that have works of art that engage with light, but we’re really excited to present this as a unique perspective on how light can really create the environments in which we live and help shape who we are,” Davis said.

“I love the eclipse shape,” Eliasson said in an interview with Wallpaper magazine. “Did you know that unlike a square, it doesn’t deform in perspective? Confronted with it, in perspective, you can’t sense the depth of the space. I like to play with the idea of challenging perceptions, or reflections, and geometry offers endless possibilities. Many might think that when you enter the art world, you step out of the ‘real’ world. But it is very much the opposite: with amplified sensations, one can connect even closer with the world and its current issues.”

“When turned on, the neon tubes flicker and buzz; the work emits a pale light and an audible hum,” wrote Conceptio art critic Stamatina Gregory. “Electricity makes the sculpture visible, revealing the way in which glass, power, black paint, and noble gases combine to create a drawing in space, an industrially produced object (glass must be fabricated, neon distilled from air) crafted to emulate a hasty, almost indecipherable scrawl within a field of gestural lines. … The sentence evokes presence itself.”

Davis said Bright Golden Haze is “a landmark exhibition, not only for the organization but really for the state,” and before moving into the new four-story, 53,916 square-foot building with 18-foot ceilings and an integrated LED track-lighting system, Oklahoma Contemporary could not have mounted anything of its size and scope.

“Literally nothing in the current exhibition would we have really been able to support in our previous space,” Davis said. “Some of that has to do with capacity and capability of the actual space.  … That gives us a little bit more real estate to play with in terms of installing artwork and being able to provide more space for large-scale works. … A lot of the objects that we have been able to curate into the show are from institutional loans, and the building and the current specs that we have for climate control, humidity levels, security, fire suppression — all of those things are new for the organization and provide us with the ability to be proper stewards of artwork from a museum perspective, so other institutions can trust that the building and the systems that we have in place and all of our plans are appropriate to secure a loan agreement for us. So a lot of the works that we have in the show would really only be able to happen in this new building.”

However, one aspect of the art center’s previous location at State Fair Park will be missed.

“The only thing we will miss, and I think this is universal among our staff, is the old planetarium,” Davis said. “We will definitely miss doing interesting installations in that space, from sound art to unique exhibition space for visual art to projection space for digital animation and 3D works. We did a lot of fun things in that space, but building a planetarium made no sense and was entirely outside of the scope of our mission here.”

Visitors familiar with the old Oklahoma Contemporary will find plenty of reasons to love the new location.

“There’s a surprise around every corner,” Davis said. “Longtime supporters and patrons of Oklahoma Contemporary will be really pleased to see the amount of space that’s been dedicated to education and learning in the new building.”

“If you find something in the shop at Oklahoma Contemporary,” Davis said, “you’re not going to be able to find it somewhere else in the city. Many of the works on view are also linked to our programming or inspired by our exhibitions or our educational offerings.”

An adjacent 10,000 square-foot warehouse space has been remodeled as a studio space for artists working in ceramics, fiber, metal and wood.

Studio School will offer more than 50 classes for teens and adults of all experience levels.

“If you’ve never picked up a paintbrush, never shaken a leg, never touched clay, it doesn’t matter,” Davis said. “There’s a class for you where you can start as a beginner, grow inspired and continue to gain confidence as your skills develop.”

The new facilities allow the arts center to offer new kinds of classes and improve the classes it previously offered.

“What we were probably best known for in the past was ceramics and fiber arts, and those will continue here, only way scaled up,” Lalli Hills said.

New class subjects include antler-handle knife-making, collage and DJing taught by Tony Tee and Angel Little, who co-curated the art center’s 2017 exhibition Not For Sale: Graffiti Culture in Oklahoma.

“We’re hoping to move into more interdisciplinary and unexpected offerings as well,” Lalli Hills said. “So the future is probably going to hold more classes like DJ school where we’re also bridging fine arts and pop culture and kind of helping erase that division a bit.”

“So much of his body of work is connected to his time living and growing up in Oklahoma City before he moved away to California, so we’re thrilled to be able to present works that are inspired by the landscape here, the history, his travels on Route 66, the culture that he grew up with in Oklahoma City, and hopefully provide a new curatorial lens on his substantial body of work,” Davis said. “We hope that not only is this a chance for people in Oklahoma to experience Ed’s body of work, it’s also a chance for us to share and create some new knowledge regarding the way his creative process has been inspired by his time and connection to the state.”

Though Oklahoma Contemporary, after more than a decade of planning, development and construction, has a new, larger location and an expanded payroll including more than 100 full- and part-time staff and educators, Davis said, the art center is still working toward the same goal it had when it first opened on the fairgrounds as City Arts Center in 1989.

“Our mission is really the same,” Davis said. “We just now have the facilities that support the aspirations and the ambitions that the organization has long held. So now we’re really able to continue the great work of encouraging artistic expression in all its forms. Now with our dedicated spaces for theater, for dance, for ceramics, with world-class quality exhibition spaces, we’re able to take that mission to a new level. … We just look forward to people’s reactions and responses and getting as much feedback from the community as possible. … There will always be new things for us to learn, but really the challenges that we can anticipate I think are being taken care of and the ones that we can’t we’ll just have to wait and see how people engage with the space, and then we’ll learn from there.”

Oklahoma Contemporary’s grand opening and ribbon-cutting is 10 a.m.-9 p.m. March 13. The gallery will also be open 11 a.m.-9 p.m. March 14, and Oklahoma City Streetcar will be free to ride on both days; get off at the Art Park stop. Regular gallery hours beginning March 15 are 11 a.m.-6 p.m. Monday, Wednesday, Friday, Saturday and Sunday and 11 a.m.-9 p.m. Thursdays. The gallery is closed Tuesdays. Admission is free. Call 405-951-0000 or visit oklahomacontemporary.org.