Oklahoma’s summer heat brings some people down, but a little hot air can lift them up.

Also, the inaugural Oklahoma City Balloon Festival, a local expansion of the popular Tulsa Balloon Festival, makes its premiere Aug. 24-27 at Chisholm Creek, 13230 Pawnee Drive. Festival organizers said the event will be the first balloon fest within the city limits in 13 years.

Balloon festivals are often associated with popular events in the Rocky Mountains and the American Southwest. The Albuquerque International Balloon Festival in October annually features more than 500 balloons and draws an international following that sometimes approaches 100,000 visitors. The Plano Balloon Festival in nearby Texas draws an estimated crowd of around 90,000.

Still, love for ballooning is far from regional. Balloon festivals attract large crowds all over the world, and Oklahoma’s newest fests are likely to do the same.

The idea for a family- and budget-friendly balloon festival in Shawnee came from a long-held dream by tribal vice chair Linda Capps, said festival organizer and CPN employee Kelley Francen.

Capps shared her vision with others within the tribe who quickly agreed such a festival would bring the CPN great visibility. In November, Francen was sent to a small balloon festival in Rockwall, Texas, for research. Work began on the first Fireflight Balloon Festival shortly after.

Some of the country’s most skilled pilots and gorgeous balloons will call Shawnee home during the festival’s run. Daytime 45-90 minute rides can be purchased for $250 per person and must be booked in advance at firelakeballoonfest.com. Tethered rides lasting several minutes are $15-$20.

However, payment is not required to enjoy the fest’s balloons. Guests can see the aerial carriages up close and personal for free during the Balloon Glows that begin after 8 p.m. Though grounded, the fully inflated balloons will inspire awe with their colors and sheer scale.

The pilots will also participate in free-to-watch balloon competitions beginning at 7 a.m. Saturday morning on the festival grounds. From high in the air, the pilots drop beanbags on a large target below for points. A child-sized swimming pool will be set up as a bonus target. Any pilot landing a bag inside is awarded a $500 cash prize.

There will be no shortage of alternatives to balloon-related entertainment. Live motocross and mixed martial arts competitions can be seen Friday and Saturday in addition to a number of other games, inflatables food trucks and live music. English rock act Foghat, known for its 1975 hit “Slow Ride,” performs a free show 7:15-8:45 p.m. Saturday.

Though some rides and activities at the event require a fee, general admission and parking are free through the festival’s run.

“For the most part, someone can come out and have fun on a shoestring budget,” Francen said.

Excitement for Fireflight, Francen said, can be seen in and outside of the Shawnee community.

“We have CPN employees who go to meetings all over the state, and it seems like wherever they go, they hear a buzz about the balloon fest,” she said.

Pat Harwell is balloon meister for the event. Francen met him at the November balloon fest she attended in Texas. Harwell said he is so far impressed with the event’s efficient organization.

“I have never worked with a first-year event as competent and as forthright,” Harwell said. “They’ve followed through on everything I’ve asked and they’ve actually come up with things I didn’t even think about. I feel very good about the show they’re putting on for Shawnee.”

“This is a beautiful place for us to fly with great hotel accommodations and great meals, and the propane is all set up for them,” he said. 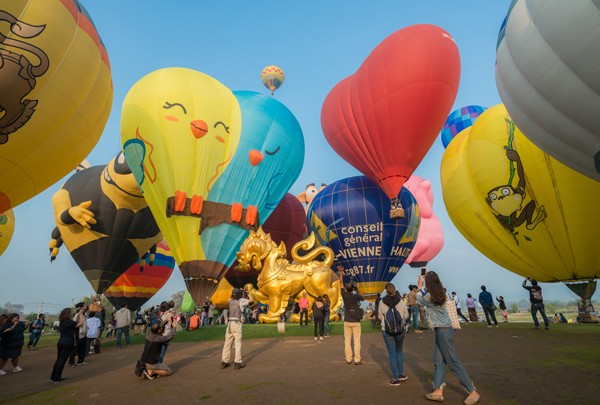 Ricky Lyons took the reins of Tulsa Balloon Festival in 2015, expanding the event by adding a carnival, live music and a street fair atmosphere. A good balloon event, he said, needs something to offer guests outside of the balloons because flights are so weather dependent.

Lyons hopes to replicate his proven Tulsa formula for success in Oklahoma City. Daily 6 a.m. and 6 p.m. flights are $200 and can be booked ahead of time at okcbf.com. Tethered flights are $15. The free Balloon Glow begins every evening around 8:30 p.m.

Lyons said the fest boasts one of the state’s largest assemblies of carnival rides outside of the state fair. One-day carnival wristbands are $25, and a four-day ride pass is $60.

Those who attend the festival must use the event’s provided parking area. Parking is $20 per vehicle and $10 when booked online in advance. Parking passes for the entire weekend can be ordered in advance for $30. Lyons said money generated from parking fees goes toward event security and management costs. At-the-gate event admission is free.

“One of our focuses is value for money and making sure people come out and have a great time,” Lyons said. “Whether the balloons fly or not, there’s just so much going on that it makes a good day out for the family.”

Oklahoma City has long been without its own balloon festival, but Lyons assured this event is here to stay. While he expects the fest’s first year to be about establishing a foothold in the community, the sky is the limit for its future.

“In five years’ time, we want to have 250,000-300,000 people coming to this event every year,” he said. “We want to generate millions of dollars of tax revenue like they do in Albuquerque and other balloon events across the country. There is a real opportunity for the city to get behind this event and to turn it into something that is beneficial to the city.”

Lyons, who lives in Edmond but is originally from the United Kingdom, expects to eventually pass festival management responsibilities over to someone local. Still, he said the event’s focus is already very community-oriented.

“It’s not a money-making exercise for Ricky; it’s a community event,” he said. “For me, it’s about the experience and building a resume here in the state. It’s about trying to build a reputation for myself and to build a career.”