Few artists appear as comfortable in their own skin as suburbia’s poet laureate Ben Folds. The piano man has maintained a steady, 31-year music career since launching Ben Folds Five in the ’90s.

While Folds has maintained relevance, it’s not without change. These days, the notably unfiltered musician finds himself in pristine philharmonic concert halls as frequently as rock venues. His last solo album, 2015’s So There, was a collaboration with New York chamber sextet yMusic. He also takes time to share his wisdom with the industry’s up-and-comers and frequently speaks at music schools across the country.

In a recent Oklahoma Gazette interview, Folds reflected on the artist he has become, how he handles “fucking it up” while performing and what it really means to be considered “cool.” 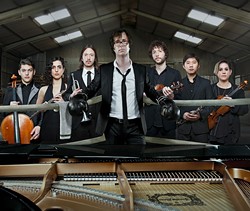 Oklahoma Gazette: The most recent thing I saw you do was NPR’s Feb. 16 Tiny Desk Concert. What do you think of that performance? Because you stumbled a little on the lyrics [to “Phone in a Pool”], but you always play things off so cool.

Ben Folds: Well, I like to get things right. On one hand, I’m a good musician, but I fuck up a lot. But I don’t ever want to lull myself into thinking that’s OK, even though I’m always patted on the back for it. I’m glad I get applause when I fuck up; that’s really lucky for me.

OKG: Not everyone gets applause.

BF: I did try really hard to get it right. You get to a point in your career when you realize — or maybe not everyone does — that you become an example of some kind. It gets to the point when a few generations of musicians have been watching what you do. I’m actually a really big stickler for “get it right,” yet here I am, fucking it up all over the place.

OKG: Most people realize every artist they watch is human. They appreciate when people can play it off. You could have made a big deal about it or said, “This can never reach air.”

BF: Coming up in the ’90s, I saw a whole school of artists, even people you would never think were like that, who pored over all their photographs, edited stuff out, chewed publicists out for not making them look the right way. I’ve never had that. I’m too fucking lazy. It’s like, “Oh well. I messed up.” But I’d rather get it right.

I’m always afraid these things that I do will become a shtick. At a rock concert, you’ll play the first few notes and everyone’s like, “We recognize it together! Yay!” and lighters go up, but no one listens to it anymore because it means something different; the meaning has been hijacked. If I ever feel, even in the smallest room, that I’m playing and that’s happened, I stop at the introduction. I talk about the song a little bit and I go back and I start it again. The reason for that isn’t a shtick so much, but I want to remember the reason I wrote something. You know? You can forget what a song is about. I’ve tried to hang on to that, and I’ve tried to write songs I’ve thought would weather the repetition.

OKG: Several years ago in Oklahoma City, you gave a master class at the Academy of Contemporary Music at the University of Central Oklahoma (ACM@UCO). You went to school for percussion. What are your thoughts on formal music education?

BF: It’s never going to be perfect when you mix art and education, like when we mix art and commerce or when we mix government with anything. There are mixtures people don’t like because nobody wants to be told how to be an artist. But despite that, I’m for as much formal training as a musician can stand, a little bit more than they can stand. I know as well as anyone else, maybe even better, that it’s frustrating, they’ll suffer, they’ll be told to be basically cookie-cutter versions of the school of music — all these things.

I remember getting kicked out of a music history class for sleeping on the desk. And the lesson had been about what a bad student Mozart was. I thought, “Oh, well that’s a nice compliment.” In my 17-year-old mind, I’m thinking that means I’m Mozart. The thing is, it just means I was an artistic being trying to get through a system. No one wants to do that. …

The thing about going to a proper music school is you also surround yourself with the best of your age, which I think is important.

One more thing I’ll say about it is it can homogenize a musician. But I would consider that to be almost Darwinian. If you allow a music school to homogenize or sterilize your artistry, maybe you weren’t ready for the real world because that’s going to be a lot tougher than the fucking music school was. 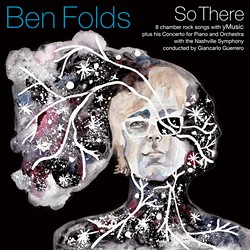 OKG: Your most recent album, So There, is a collaboration with yMusic. Do you think that album accomplished everything you wanted it to?

BF: Anymore, if I felt like I made something and expressed myself, yeah, then it did it. I can try to push it like a campaign to an extent, and that’s exactly what they end up being. Being in the political season, it always strikes me how an album is, in fact, launching a campaign that costs a fuck-ton of money. There’s a whole system that you can be a part of, or it can be stacked against you.

I couldn’t tell you on a commercial or a critical level how it was received. I expect if it had blown all the doors open, I would be accepting my Grammy and would have gotten a big check in the mail. People seem to like it, and I keep cruising. It was the No. 1 classical album for, like, weeks, so that’s cool. I never expected it to do that.

OKG: As you age, do you find yourself being less or more self-conscious about your music?

BF: I’m not sure people change too much in that regard. I think you have to loosen up a bit. If you’re overly, unhealthily concerned with how you’re coming across, then it stands to reason that when you get it, quote, “right” and you’re being patted on that back, you should continue to strive for that. The problem is the world changes and you change and it’s a pretty sad-looking and sounding musical career when someone keeps trying to get patted on the back for something they did before.

I guess since we’re still in the wake of David Bowie, you could use him as a great example. Listen to even the tone of his voice in the mid-’70s and then listen to it in the early ’80s. It’s like the man’s nuts dropped. And he didn’t try to do what he had been doing at all. Most people do, and you hear it all the time. That’s a bummer.

OKG: The cool thing about Bowie and his new album, Blackstar, is that a lot of artists his age could settle in to, “This is what I did when I became famous,” but he made progressive music through his dying days.

BF: We see this as cool at the moment, but I guarantee you Bowie’s last however many albums have been up against an incredible uphill perception. His people or someone had to be incredibly frustrated at times that he couldn’t get certain opportunities you think that he would. And now that he’s dead, he’ll certainly have those opportunities and people will appreciate it more now.

We’re talking about the coolest motherfucker of all time. Everyone knows that. But even he would have that problem. …

It’s sort of like Paul McCartney going out and doing a thing with Kanye West and having all these kids saying, “Oh, it’s really nice of Kanye to help this old man out.” But as soon as the terrible day comes that Paul McCartney dies, years of him weathering, being the most uncool motherfucker on the planet, that’ll be over. It’ll be, “Can you believe how cool this guy was?”

As you age in the music business, you have to take a lot of back seats. It’s very humbling. It’s harder to get certain things that used to be things they would just give you. You look at the person who’s getting those opportunities, and you’re like, “Are you shitting me? This fucking guy sucks! Really? They’re not going to have us? No!”

That’s the thing about Tiny Desk. It’s great. They gave me an opportunity by having me on, but that’s really not that normal for me. I have a hard time in this era. My people have a real hard time getting me on lots of stuff. So I go out on tour and do my thing.

OKG: You call Bowie the “coolest motherfucker of all time.” I came across a headline that called you “the subtly cool Ben Folds.” Do you think that’s apt?

BF: Subtly? Oh, I don’t know. You know, it’s really funny because I’m working on a book, and it’s basically just my thoughts on shit. It should just be called that, My Thoughts on Shit. And one of the things I’m trying to address is this whole cool thing.

People talk about what makes the music business go ’round. Is it greed or fame or the art? A lot of people would assume there’s a bald, greedy motherfucker in an office somewhere that’s counting his dough. Actually, I think all the unexplainable is quickly explainable in that they’re all just trying to be cool. They’re all just trying to be cool. Right down to the fucking accountant who had his top five playlist ready to go, it looks coiffed and ready for an album cover. Everyone’s so fucking cool, and they have been the whole time.

I used to just marvel showing up at these expensive video shoots where even the guy bringing in the craft service and the assistant to the makeup artist — they looked like they needed to be in the video, not me [with] my wrinkled clothes, walking in, fucking up.

OKG: That’s a good point. Everyone talks about it, but what is cool, really?

BF: You know, it’s probably best described in some sort of anthropological terms. It’s almost pheromonic. I think it may be a constant game of social chicken. “Is he going to back down on his opinion? No, he’s not? Well he’s not cool and we’re sending him to the edge of the village.” Then it’s like, well, he’s standing there at the end of the village just in a fucking penis gourd, hanging out. That’s pretty cool. I think we’re going to go join him picking berries and shitting on the ground. Let’s go hang out with that guy. … It’s all bullshit.

Print Headline: Unfurling Folds; After three decades in the music business, Ben Folds has no patience for disingenuous crap.