Cover Story: AGRARIAN BUFFET: Foraging grows beyond noshing nuts and berries to the creation of truly hyperlocal recipes and menus

Much like real estate, food sourcing in Oklahoma is largely focused on location, location, location. Restaurants build seasonal menus and source ingredients from local growers. Consumers are encouraged to shop and dine at locally owned venues. The art of foraging, or wildcrafting as some call it, has become more popular in recent years and is now far more sophisticated than snacking on handfuls of pecans and mulberries. Everyone from chefs to backyard foragers are finding innovative ways to incorporate delicious ingredients found across Oklahoma and even in our own backyards. For those feeling adventurous and wanting to learn more about native ingredients and get their hands dirty while scavenging for edible delicacies, experts offer tips about how to safely and legally do it.

Colin Stringer, who co-founded rogue (and now retired) Nani supper club with Andon Whitehorn and is the current executive chef of anticipated Nonesuch restaurant (coming to 803 N. Hudson Ave.), incorporates his love of foraging in the plates he serves. Ingredients for Stringer’s next innovative dish might sprout up in his own backyard.

“A lot of this stuff people would consider weeds; growing in backyards and on roadsides,” Stringer said. “That being said, it’s important to know that if you are foraging near the city, use common sense. You don’t want to pick things that are too close to a road or an oil well.”

Secondly, Stringer emphasized the importance of not harvesting more than you need. Invasive varieties, like wild onions, aren’t as much of a problem, as they can triple in size each season. Also, many who forage for morchella, or morel mushrooms, for example, will carry their harvest in a sack with holes, allowing spores to spill from their distinctive honeycomb-shaped sacs back onto the ground and help the fungi proliferate.

But when pulling from a more delicate plant, Stringer said it’s best to insure the root system remains intact so it can reproduce.

Early summer is one of the best times for foraging, especially before the heat of July and August sizzle delicate ingredients.

The most commonly foraged early-summer item is pokeweed, or poke, a hearty, herbaceous perennial. Cooking pokeweed requires a couple of rounds in boiling water, but the tender plant has an asparagus essence that can be incorporated beautifully into scrambled eggs. Its grapelike pokeberry seeds, however, are toxic to humans and should not be eaten.

Right now, Stringer is pickling late-spring, early-summer wild onions, which are starting to get a bit woodier in texture. He is also on the lookout for wild sage, or prairie sage as it is sometimes called, and even edible wildflowers like bachelor buttons, also known as cornflowers, growing along country roads.

“It’s a good time of the year to go out there and explore,” he said. “If people want to get into foraging, it’s important to not get discouraged. It’s all about repetition. And one day, you’re going to go out there and you are going to identify a plant for the first time that you’ve only read about or saw [in] photos. It’s pretty exciting.” 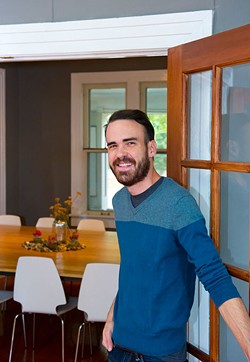 Creating beautiful recipes from Oklahoma-sourced ingredients is Tricia Dameron’s passion, and she has long shared her experiences and recipes on her oklavore.com blog. She said the ultimate hyperlocal foraging source is your own backyard.

“I got interested in foraging a few years ago, but I just dabble. … I basically forage my own yard,” she said — and for good reason. “Foraging can be a challenge because you need to have private land or know someone who has private land for you to forage because it’s illegal to forage at state parks or state’s wildlife management areas.”

When she started to dig into foraging more, a couple of Oklahoma Administrative Code sections caught her attention:

“I hate to be a wet blanket, but you can’t just go anywhere to forage,” Dameron said. “So it’s important to be aware of the local ordinances in your area.”

Instead of roaming onto public lands, she recommended getting chummy with neighbors who might have a wealth of forageable food that they might not be using.

“I had a neighbor in the Plaza District who had several persimmon and pecan trees. He didn’t use the fruits, so I asked if I could.”

Another ingredient Dameron regularly uses is the ubiquitous dandelion.

“A pesto is very easy with the dandelion greens,” Dameron said, “and they are great added to quiches, frittatas or salads.”

Pretty soon, Dameron will harvest mulberries from trees and make sauces and jams or eat them straight from the tree. Though foraging sources can be easily found, it’s important to know they are safe.

“Keep in mind that though an area may have plants that are edible, you wouldn’t want to harvest them if they have been sprayed with any fertilizers or other chemicals,” Dameron said.

Jackie Dill isn’t a forager. She calls herself a “heritage wildcrafter.” She said the difference is the emphasis on harvesting from the land in a safe, ethical manner.

“You don’t want to go and ravage the land,” Dill said. “We limit our harvesting to a certain percentage; that way we know it’ll be there the next year and for future generations.”

Another huge consideration for new foragers is safety. Many plants are toxic and even deadly, so the importance of proper identification can’t be overstated.

“We don’t recommend the internet [to identify plants]. There’s too much info that is not spot-on. And it’s especially important to be region-specific,” Dill said. “We really recommend that you walk with someone who knows.”

Dill has led guided tours to help budding foragers. Her class sizes have doubled over the past year. On the tours, she helps foragers identify edible ingredients and instructs them on how to prepare them.

“Just because you can eat something doesn’t mean it’s palatable,” Dill said. “Wild foods [taste] more intense; they have stronger flavors. And there could be the potential for allergies, so we always recommend to start with a small portion, just to be safe.”

She harvests year-round in Oklahoma. In the summer, she advised to look for greens, like lamb’s quarters, deadnettle, chickweed, wild garlic and wild onions. Dill said that these ingredients make amazing pestos. But more than greens fill her repertoire.

“This spring, we used redbuds in baking, but they are also really great for snacking. Hackberries, even though they are so tiny no one would ever think of eating them, are a great trail nibble.”

Though there are some rules for where to forage, Dill said even those living in urban areas are still able to track down ingredients.

“They will ask their neighbors first if they spray their lawns with chemicals,” Dill explained. “Then, they just ask if they can pick something. In Oklahoma, people are really good about allowing that. If you ask, they usually won’t have a problem.”

“People often stuff morels with cheese and deep-fry them,” Stringer said. “I rarely do that because I enjoy them more simply basted in brown butter in a pan. This recipe is an inspiration from the deep-fried morel, though — that is why it served with a fresh ricotta. You want to make sure your morels are cooked through, as some people are sensitive to a compound within them called monomethylhydrazine.

“You want quite a lot of butter so that you can really baste the mushrooms in a small sauté pan.

“After they are nicely cooked, browned and salted, I serve them with a fresh ricotta that I have blended foraged and blanched stinging nettles into. You could use many different wild herbs or pot greens in this case (think lambs quarter, chickweed, prairie sage, violet flowers). I serve the morels alongside this rich cheese. You may want to spritz the whole dish with a touch of lemon or vinegar to lighten the whole thing up.”

One last reminder from Stringer: “Please be careful; know what you are picking and eating.”

— Photo and recipe by Colin Stringer

Add pecans, garlic and olive oil to the processor and pulse the mixture until reaching desired consistency. Add the grated Parmesan, salt and cayenne pepper to taste. Transfer the mixture to a container and cool in the refrigerator for a couple of hours before serving. For variety, you can substitute some of Oklahoma’s other wild greens for the lamb’s quarters.

Cook potatoes, henbit and chicken in a crockpot. After the mixture is cooked, add sautéed onions, sautéed garlic and soft goat feta cheese (or half-and-half); salt to taste; and then add honey.