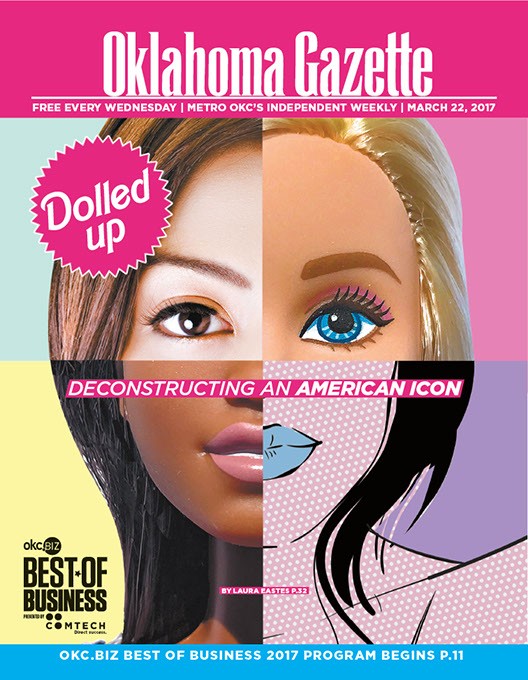 The Barbie doll captured the imaginations of girls while it played into late 1950s and early ’60s societal trends and culture. Over the past five decades, with her beauty and charmed life of designer gowns, pink Corvettes and a resume spanning more than 150 careers, Barbie remains a symbol of popular culture.

Barbie is not purely a toy. She is an icon. All icons — especially those that permeate every corner of culture — transmit a variety of messages. The doll represents the good and bad of American culture. Some see it as overtly sexual, shallow and materialistic; others see a toy representing the evolution of real-life feminine goals of independence, success and equality.

In Altered Barbie: Nobody’s Fool, 32 Oklahoma women artists alter Barbie or aspects of the Barbie brand in their work and, through various media, interpret Barbie and her place in society. Sponsored by Women Lead Oklahoma, the art exhibit and fundraiser is April 1 at Plaza District’s Kasum Contemporary Fine Art and is a spinoff from last year’s successful Altered Barbie Art Party.

Founded in 2015, Women Lead is a nonprofit that empowers and engages women, with emphasis placed on those systematically disenfranchised from the civic process.

“In engaging and empowering women, we pull back those barriers or perceived barriers that prevent women from getting engaged, involved and their voices heard,” said Kendra Horn, Women Lead executive director. “To do that, we question the ideas and stereotypes around icons.” 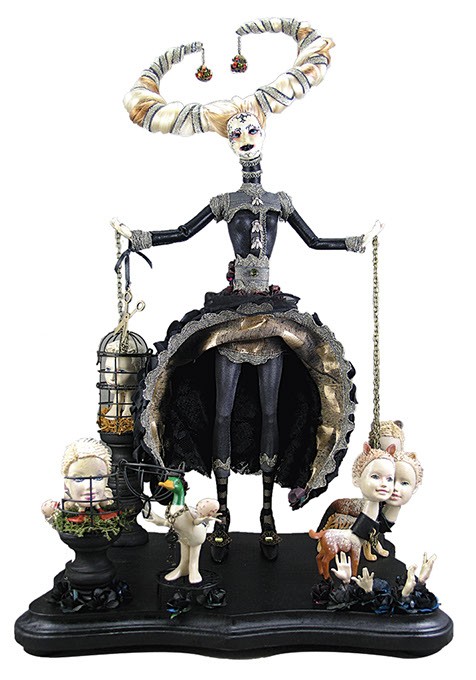 The Women Lead event comes just two months after the burgeoning movement to advance an agenda for women’s rights in Oklahoma and across the United States. While the role of women has changed drastically in recent decades, Oklahoma’s lack of progress on women’s issues in areas of health, economics, leadership and violence prevention is a black eye for the state.

In January, thousands of women and allies marched around the Oklahoma State Capitol, sending a message to state lawmakers to pass women-friendly policies. Out of this context, Altered Barbie: Nobody’s Fool turns to Oklahoma’s women artists and their message. These artists contemplate and challenge cultural narratives, play with imagery and evoke emotion in ways traditional politicking and community advocacy can’t.

“We imagined a creative collaboration with the art community in ways not yet thought of — new formats and alliances to reach out to our audiences with a powerful visual message,” Women Lead board member and artist Lynette Mathis told Oklahoma Gazette. “The match of Barbie plus Women Lead works quite well for us. You might say that, together with these talented artists, we’re reclaiming and repurposing Barbie for a new era.” 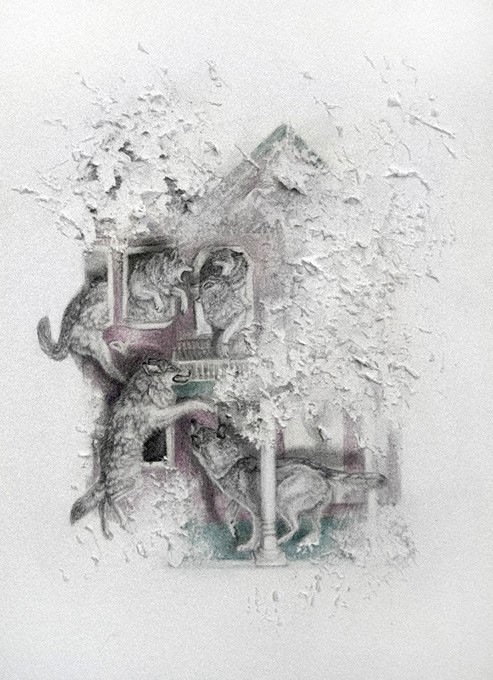 It didn’t take long for artist Stacey D. Miller and Tony Morton, the husband-and wife duo behind Kasum, to embrace the concept of artists altering Barbie as a means of reflecting on current society.

After 10 minutes of browsing art featured in last year’s event and meeting the leaders of Women Lead, the two committed their support, paving the way for this year’s exhibit and fundraiser to happen at Kasum.

“There are some exceptional artists that chose to participate in this show, from real fine-end established artists to some that are emerging at the collegiate level,” Morton said. “They are all really forward-thinking women in their abilities to put conceptual depth into what they do. … I have no doubt that for those who like to look at narrative, subjective art and unravel a mystery, there will be a lot of interesting subtle complexities to be discovered in these projects.”

As the exhibit’s organizing curator, when Miller approached artists, she passed along news articles and scholarly writings examining Barbie’s role in society and her influence as a cultural icon. Beyond web links, she also shared instructions on how to present their interpretation of Barbie.

“I left it as open-ended as I could,” Miller said. “I wanted the artists to use Barbie as a muse. As a fundraiser for Women Lead, a women’s organization, I wanted them to use their voice for sparking their interpretation of Barbie, looking beyond Barbie’s Mattel marketing department.”

Speaking to the Gazette from inside Kasum gallery, both Miller and Morton said that feedback over the exhibit was overwhelmingly positive; only a few artists declined an invitation.

“The artists took it to some really interesting places,” Morton said. “When you start thinking about Barbie as this statement, it can be confrontational.”

Controversy erupted when Barbie debuted, and criticism never ceased, Morton explained. As a doll for children, Barbie had a figure of a grown woman, one who was super-thin with a tiny waist, and exuded a contemporary image of beauty.

Over the years, Barbie took on many forms through her various careers of teacher, astronaut, doctor, athlete and even presidential candidate.

Miller added that negative perceptions of Barbie are not universal. While preparing the exhibit, she noticed that different generations of artists presented contrasting views and feelings about Barbie. Altered Barbie: Nobody’s Fool represents a spectrum of perspectives on the doll and examines how and where women fit into important roles in modern society, Miller said.

“I had Barbie (dolls) as a kid. I never thought and still don’t see Barbie as negative,” Miller said. “I look at it from the marketing and advertising standpoint — that is the part that bothers me.”

Earlier in her career, Miller created a series of paintings that she coined her “feminist series.” After reviewing 1950s advertisements targeting women, depicting them in the kitchen, speaking with kids and expressing joy about a utopian home, kitchen appliance or food product, Miller painted satirical scenes to convey how far societal norms have changed.

She seeks to do the same with her piece for Altered Barbie: Nobody’s Fool. Depicting silhouettes of women’s heads through the decades, Miller shows the progression of a modern woman and contrasts it with a progression of blonde-haired, painted-lip Barbie who hasn’t changed much in her 50 years.

Miller connects Barbie’s sluggish evolution with the limited standards of beauty and women portrayed in media and in advertising. Above all, Barbie is a consumer product.

“Whether you think Barbie is bad or good, she didn’t fool me,” Miller said. “The concept of Barbie didn’t fool me as a child, but what will the other artists say?”

For artists that participated in last year’s event, Barbie was portrayed as a model and party girl as well as a political activist and feminist, explained Mathis, the Women Lead board member who initiated the exhibition and fundraiser. Mathis is eager to see what the other artists produce.

“What will these Oklahoma women artists have to say at this crazy moment in time?” Mathis asked. “And how will Barbie — our old friend and nemesis — help them say it?”

Mathis’ piece is “Party on the Glass Ceiling,” an installation in Kasum’s front window. She presents a visual story about Barbie as Everywoman through scenes “The Spinning Wheel O’ Fortune,” “The Sisterhood of All Barbies Everywhere,” “The Cage of Unfortunates” and “Feelin’ the Love (The Lovely Alliance of Barbie + Ken).”

“Barbie presents a narrow version of femininity,” Allen-Barron said. “I know many women who don’t wear heels every day or makeup every day. … There is a much broader spectrum for women to express their style and professionalism.”

Her acrylic piece, “Professionalism: Dressing Like a Woman,” depicts Barbie and Ken accessories and the norms governing gender-appropriate business attire.

Each piece will be auctioned off, with proceeds split between Women Lead and the artist. The ticketed event also includes hors d’oeuvres and drinks.

As an icon, Barbie conjures many feelings and sparks a range of conversation, but when altered — emphasizing good and bad — she raises new questions, and the answers lie with the artists.

“Altered Barbie is about looking at this iconic imagery,” Horn said. “What does it mean, and what can it mean? Question those underlying assumptions. What did the artist want to embrace, and what did they want to let go?”