Iconic structures like Stage Center and Union Bus Station have been demolished or slated for removal over the past year, causing some to question the city’s commitment to conserving its architectural art.

“It was the vision of tomorrow that really spurred a lot of demolition in Oklahoma City,” David Pettyjohn, executive director of Preservation Oklahoma, said in reference to the mid-century urban renewal projects and today’s effort downtown to remove old buildings to make way for new skyscrapers.

The city experienced an architectural renaissance in the mid 20th century as iconic buildings like the Gold Dome and Founders Tower were built following the popular Googie style, which uses geometric, futuristic shapes inspired by car culture and the Space Age.

Another building boom occurred in the 1980s when Valliance Bank Tower, One Leadership Square and Union Plaza were constructed as symbols of economic power.

“One of the great things about historical architecture is it provides diversity to a city,” he added. “When you now look at [downtown] and what it’s becoming, it’s pretty much just glass and steel and … parking garages.”

“Our goal was to have a garage that blended parking with office and retail in a highly pedestrian environment and also complemented the current architecture in the area,” Central Oklahoma Transportation and Parking Authority (COTPA) Director Jason Ferbrache said in November at its opening.

“We’d always kind of looked at the [Mayfair] and thought it could be really cool,” said Jana Krauss, a property manager with Midtown Renaissance, the company that owns Mayfair Apartments. “We wanted to make it something you wouldn’t expect to see in an old building like this.”

The 13 apartments inside utilize straight lines and white surfaces in their ultramodern and contemporary design features.

Just a few blocks away, 309 Monterey's preservation project also emphasizes its modernist influence. Built in 1947 as a Chrysler-Plymouth sales-and-service shop, the open-air interior was retrofitted with 13 stacked shipping containers, each serving as an office. Shipping container repurposing is a growing trend locally. Other projects, including OK Sea, also used them.

AIA dubbed this week Architecture Week in OKC. It runs through Saturday. A series of related events include a presentation on endangered buildings (see okgazette.com for more coverage from Tuesday’s event), a photography competition and an awards ceremony Friday.

“We’ve had Architecture Week since 2001, which includes the big tour of five residential and three commercial projects,” said Melissa Hunt, local AIA chapter executive director. “We usually have about 600 people who want to attend the tour.”

Hunt said this week not only celebrates the work of the architecture community but allows the public an opportunity to expand its understanding and appreciation of the roles building and design play in our city’s history and ongoing development.

“If you’re a non-architect, you would probably latch onto the Devon Tour that is so visible, and that’s a great project,” Hunt said. “But we have many other projects that we are excited about. I have seen a huge transformation in the types of styles we now see.” 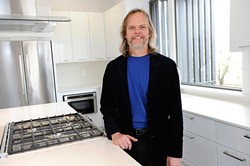 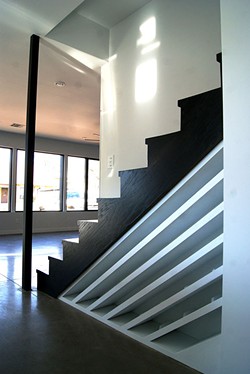 Beyond renovation and demolition, the city also is experiencing an increase in new, modernist-influenced housing construction.

Architects like Ken Fitzsimmons of TASK Design interior and architectural design firm credit that growth to the region’s willingness to take imaginative risks.

“I think people are definitely not as afraid to try and do something unique as they used to be,” said Fitzsimmons, who designed the 828 Residence, located in the growing SoSA (South of St. Anthony) neighborhood, another building on Saturday’s tour.

The dwelling’s modernist design features clean lines and a boxy shape. At the same time, it also incorporates many practical features often included in older homes.

It is one of several contemporary homes that blend both modern and traditional elements as SoSA becomes a city hub for residential design.

“Being an Okie, it’s got to work, it’s got to meet the budget and you use what’s available,” Fitzsimmons said. “But I think we also try to make it unique while also being something that fits here.” 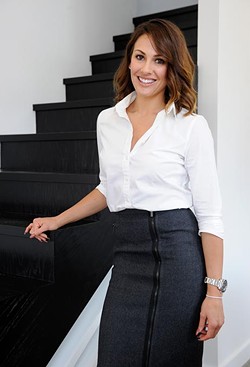 Kayla Baker, co-owner of Northline Development, said both modern and contemporary styles are growing in popularity across the city. Northline owns the 828 Residence.

“I felt like there was never really a product that I wanted to buy in Oklahoma City. I went down to Dallas and found this modern duplex that I fell in love with, and I started to use that idea here,” Baker said. “If you want something like this, you have to venture out on your own, which is scary to a lot of people. Personally, I think building a traditional home is more risky.”

While some of the area’s modern architectural styles already exist in other markets, many of these buildings also have unique aspects and pay homage to our state’s culture. As Fitzsimmons said, a scaled-down budget becomes more important here when compared to prices in places like New York or Los Angeles. And architects add personalized touches to their work.

The home’s Classen-facing side is a flat, three-story surface that mimics the industrial look of its surroundings. From Eighth Street, however, the structure more closely resembles a house, including an angled roof and a mixture of cedar and metal construction elements that uniquely emulate neighboring homes.

Butzer said her team did not want a blank wall facing Classen, so various panels were used to spell out the owner’s name in Morse code, providing an artistic look that still had personal meaning to the owners.

“I think it’s really very poetic that it has meaning to the client with personal features that those driving by might not even realize,” Butzer said.

Brian and Ann Dell own Classen Residence, and their goal was to build an uncomplicated house in the city’s core.

“We relied on our architects, and we are very happy with what they did for us,” Ann Dell said. “They used the space really well; there is enough room, and we aren’t too crowded even though it’s a smaller home. It kind of fills our needs perfectly.”

“By American standards, Charlotte is an old city, but it has undergone a huge transformation in the last few decades,” said Christopher Henry, a writer with architectural website ArchPaper.com. “It is now the second-largest banking center in the United States, and this is partly reflected in its growing skyline.”

Even at the street level, cities like Charlotte have embraced distinct style touches that help define neighborhoods and give them a personalized feel.

It’s also happening here, where projects like Dust Bowl Lanes & Lounge in Midtown creatively utilizes color and signage to help it stand out.

“I think people are beginning to expect something that is different or [unique],” Fitzsimmons said. “What people are willing to take on is changing.”

“I don’t know if the average citizen understands the importance of architecture and design, but it seems like, as a community, we are becoming more aware,” he said.

“I think that it is a great time to be an architect here and a great time to really play a role in how the city is being shaped,” Butzer said. “It seems like there are lots of new buildings out there that are done in fresh ways and not just old, traditional ways.”

Tour tickets are $12 in advance and $15 the day of the event and include a printed tour guide with detailed information about each of its eight locations, including the history of each particular building style.

“The more people pay attention to their surroundings I think is only a good thing, and architecture helps you do that,” Butzer said. 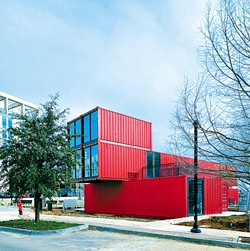 Register for each and learn more at aiacoc.org.