“We may cause a scene worthy of the 10 o’clock news,” Bennett said.

The first season games are behind us, but the mania that is college football fandom in Oklahoma has just begun.

Both the University of Oklahoma (OU) Sooners and Oklahoma State University (OSU) Cowboys have 10 more games before they meet for their Dec. 3 Bedlam matchup in Norman.

During those three months, the fortunes of each team could swing wildly, and with them the moods of fans across the state.

It started innocently enough. Forrest Bennett was volunteering at a fundraiser when he saw her.

“To be frank, you’re invited to those things either because you have the means to write a nice check or they need you to help out at the event,” he said. “Obviously, we were both helping out.”

Most volunteers were the regulars he saw every time, but then he spotted Meg McElhaney.

“But I saw this beautiful girl — who was certainly not a usual suspect — and I didn’t know who she was,” he said.

After a little recon, he introduced himself and they talked. McElhaney wasn’t available then, but when the pair ran into each other at another political function a few months later, she was single.

Thus began a relationship in 2013 that led to living together ... and friction. Both now work in Oklahoma City. (Bennett is running against Joe Griffin to replace term-limited Democratic incumbent Richard Morrissette for Oklahoma House of Representatives District 92, which includes Midtown, but that’s a whole other battle. Politics and sports don’t always mix well, so that might be a conversation for another time.)

Bennett is an OU grad. McElhaney matriculated at OSU. Both had previously dated someone from the other’s school, he said.

“I think we both came into this arrangement having already dealt with those challenges once,” he said. “It was probably good to have that prior experience.”

McElhaney said they both knew what not to do, like act “a bit too happy” when OU loses to Texas.

It’s easy enough to dance around the subject of team dominance during non-conference games.

That task grows more difficult when Big 12 matchups start and the intrastate squads grow closer to a showdown.

McElhaney and Bennett admitted they get most testy about the rivalry during Bedlam. Those conflicts are no small thing, he said.

“We always make our Bedlam plans well enough ahead of time such that there’s no turf war with regard to who gets to have their watch party at the house and things like that,” he said. “It takes some extra strategic planning ahead of time to avoid too much conflict.”

All the planning in the world can’t cool the fiery competition between Cowboys and Sooners, McElhaney said.

“As a rule, we are in separate ZIP codes for Bedlam each year,” McElhaney said. “I don’t see that changing anytime in the near future.”

And if it did, everyone would know about it, Bennett said.

“Because we may cause a scene worthy of the 10 o’clock news,” Bennett said.

Last year, he hosted a watch party at their house. When OSU lost, McElhaney came home early to beat the traffic.

“I had to kick everyone out,” he said.

Something was wrong with Mathew DeKinder.

The Bethany native is a lifelong OSU fan. No matter the sport, the Cowboys are his team. Growing up in the 1980s and ’90s, there were some years when loving his team was particularly painful.

“I remember caring who won or lost games, but the point where I realized I was caring too much was the 1988 Bedlam game when Brent Parker dropped the pass in the back of the end zone,” he said. “My brother and I bawled our eyes out, especially with the knowledge of the hell we would catch on Monday as essentially the only OSU fans in our elementary school.”

When he started college in Stillwater in 1996, the connection only grew deeper as he formed friendships with other sports obsessives.

His love of OSU not only brought him closer to his father and grandfather, but to thousands of people he never met.

“When I meet another passionate OSU fan for the first time, there is an instant bond, because I know that person has experienced many of the exact same joys and sorrows in their life that I have,” DeKinder said. “That’s tough to beat.” 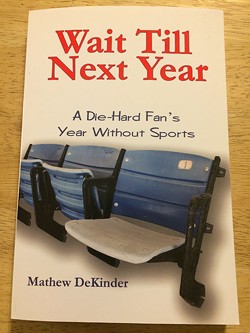 There’s also a dark side to fandom. As gloriously high as the wins can be, the lows of losing are arguably more extreme. And every team loses.

“Being a die-hard sports fan is like getting warm, comforting hugs from grandma where grandma will occasionally, and without warning, knee you in the crotch,” DeKinder said. “It’s a rough way to live.”

After graduation, he married his college sweetheart Julie in 2003 and moved to St. Louis, Missouri. As his wife was expecting their first daughter, Athena, the couple made a decision: He would give up sports for a year.

The process and progress of that agreement is the subject of DeKinder’s 2009 book, Wait Till Next Year: A Die-Hard Fan’s Year Without Sports.

“I knew having an entire weekend wrecked by grown men chasing a ball around was not a healthy way to live my life, and it was hastened by the fact that my wife was pregnant with our first child,” he said. “It was pretty clear that extreme sports fandom is easily passed from one generation to the next, and what I wanted for my kids was to be able to enjoy the positive aspects of sports without losing their damn minds over it.”

For 365 days, DeKinder avoided sports about as much as someone in a pro-sports mecca like St. Louis can. Each morning, Julie removed the sports page from the newspaper. ESPN became anathema. Even fantasy football was suspended, and DeKinder handed over his team’s management to a friend for the season.

“Logistically, the biggest challenge isn’t avoiding sports, but continuing to interact with the rest of humanity still engaged with sports,” he said. “You don’t realize how many social activities have sports woven through them.”

Disconnecting didn’t curb his love of OSU, though.

Instead, it helped him reconnect with the good and let go of the bad.

“I still watch the games and I am still happy with a win and sad about a loss, but I don’t carry it with me anymore,” he said. “It’s basically like I’ve stopped stalking Ben Affleck but I’m still a member of the Ben Affleck Fan Club.”

The perspective he gained from the hiatus is the positives people gain from loving a team can be easily washed away by the ugliness of obsession — if one lets it.

“I’ve learned that just focusing on the game itself can go a long way to maintaining your sanity. Avoiding the sports media echo chamber in good times and in bad help to keep things on an even keel,” he said. “Life is too short to let a ‘leisure activity’ beat you up like that.”

It’s easy to imagine football superfandom as nothing but trouble.

Even scientists examine the issue, as in a 1998 paper published in the journal Physiology & Behavior, which showed that people watching their favorite teams win experienced increases in testosterone, while those whose team lost experienced decreased levels of the steroid hormone.

The paper purports findings suggesting wins or losses have “physiological consequences that extend beyond changes in mood and self-esteem.”

But the rivalry can also be a fun way to troll your significant other, Bennett said.

And he said the back-and-forth helped break the ice in what could have been an uncomfortable family situation.

“I did feel a rite of passage with Meg’s dad when he bet me that OU would lose the Tennessee game. That was a nail-biter, but we won,” Bennett said. “In a funny way, the OU-OSU thing has sort of been a way to break the tension one usually feels with a significant other’s parents.”

Growing up in Oklahoma, football is embedded in the culture, he said. As a fifth-generation Okie, that means his fandom is a part of who he is.

“Any native Oklahoman knows the frustration of being associated with outdated stereotypes, so when football rolls around, we lean into our traditions,” he said. “OU was named one of the greatest football programs of all time this year, which is pretty great. And I’ll be honest, I couldn’t be more thrilled that OSU is building a sustainably competitive program up in Stillwater, because that makes the rivalry more fun.”

A little kindness goes a long way, he said.

“It’s all about balance, I think,” Bennett said. “Being able to be simultaneously happy for your team and sympathetic to the other’s — or the other way around — can be tough.”

But like so many things that are tough, it’s worth the effort, McElhaney said.

“You have to not only love the other person, but actually like them,” she said. “Sometimes enough to cheer for their team.”

Print Headline: Extreme (emotional) sports, As college football season ramps up, is insanity around the corner for fans that live for their teams?