Cover Story: As the popularity of American Ninja Warrior rises, a local gym is providing an opportunity to join in the fun 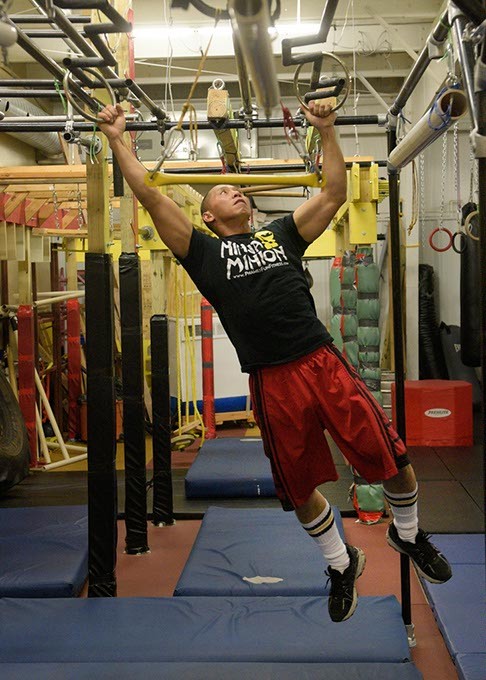 When the hit NBC television show American Ninja Warrior came to Oklahoma City last May to film a qualifying round outside the Capitol, Edmond resident Dominic Pham knew, after sending in multiple video submissions over the years, it was his best chance to get on the show.

Three times a day for three weeks, Pham would go to Stars and Stripes Park at Lake Hefner to make sure his name was on the walk-on list for the chance to complete the 10-obstacle course and be entered into the qualifying show, which culminates with a $1 million finale in Las Vegas.

Despite being 16th in line, the call for Pham to run on the course never came. Instead of allowing another rejection from the show get him down, Pham, a licensed trainer, decided to improve his skills and help others by opening his own ninja gym. Outside Ardmore’s Gauntlet Fitness, Oklahoma did not have another gym dedicated to obstacle course training. 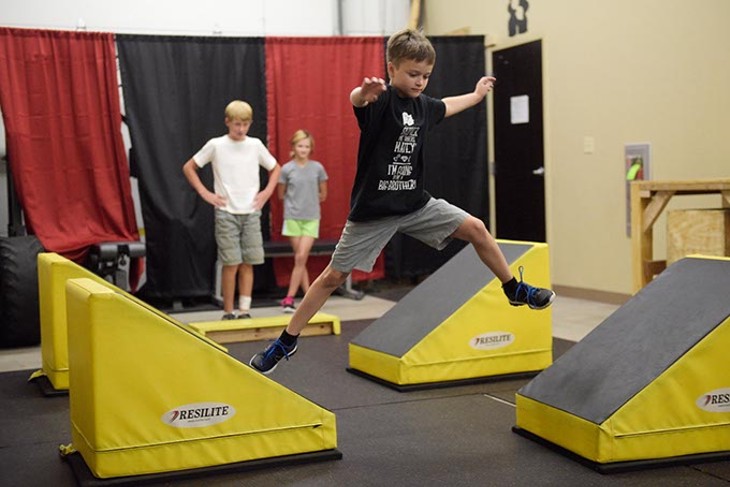 Pham found a warehouse space near his Edmond home and got to work building obstacles in early July 2016, a task he accomplished thanks to his day job as sheet metal fabricator. Phamily Fun & Fitness opened at 404 Wimbledon Road in early August last year complete with a 14-and-half-foot-tall warped wall, the signature final obstacle of every ninja warrior course.

“I had to take a leap of faith,” Pham, 39, said of opening the gym. “I’m in my late 30s, and you go through life looking for the next goal. Whether it is high school, college or your job, you go through this marathon race, and it’s like, ‘What is the purpose?’ The purpose is seeing the happiness in people when they come into the gym, see the course, and eventually the gains that they can make; it’s enough for me.”

Pham opened with the intent on targeting adults, and many — including American Ninja Warrior season nine competitor and former University of Michigan gymnast Rohan Sebastian — do train there, but the gym has found its niche, Pham said, training kids from ages 4 to 14.

“It’s a struggle if [the kids] don’t get it or start crying, but it gives you sense of patience and perseverance,” Pham said. “When they start making those gains, that’s the brightest thing when they start smiling.” 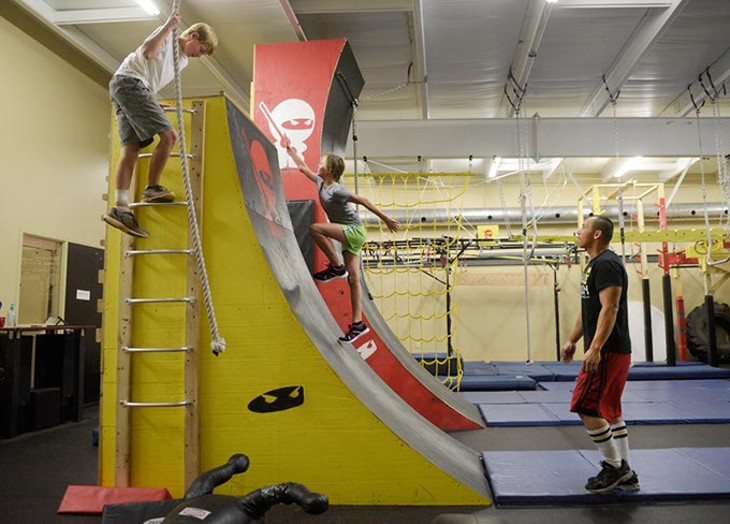 Pham said the decision to market and cater the gym to children was done in part because the show is very popular among younger demographics. Modeled after the successful Japanese show Sasuke, which originally aired on video game-focused channel G4, American Ninja Warrior (ANW) has become a runaway hit after its rights were acquired by NBC.

In the age where millennial and Generation Z is increasingly eschewing broadcast television, ANW routinely draws a 1.9 rating in the key 18-49 age demographic and sports a healthy 6.4 million viewers overall. It has become NBC’s second highest rated show, only trailing juggernaut America’s Got Talent and routinely beats other reality hits like ABC’s The Bachelorette and Fox’s So You Think You Can Dance.

The show’s popularity, along with the rising preference for high-impact interval training (HIIT), like CrossFit or P90x, has lead to a number of Ninja Obstacle Course gyms opening around the country. Ultimate Ninja Athlete Association, a corporation that promotes and organizes regional ninja obstacle course competitions nationwide, lists over 50 ninja course gyms across 35 states.

Sebastian won two national championships with the University of Michigan during an All-American career and was selected by ANW producers to compete in the Kansas City qualifier, which aired this July. Sebastian did a few workouts at an obstacle gym in Michigan, but once he came home to start medical school at the University of Oklahoma, he began training with Pham.

“I would not have done as well if it weren’t for Dom’s training and the course he’s built,” Sebastian said, noting that the course helps with grip strength and endurance. “He’s the perfect coach. He adapts martial arts training to the obstacles, and you can tell he works really hard. It makes you not want to give up.”

Sebastian’s run on ANW ended in the balance portion of the course.

“The previous person had splashed my balance obstacle, so I slid in the middle. At least it was an epic fall. I was disappointed because I could’ve killed the rest of the course, for sure.”

Audrey Rose Price, a former University of Central Oklahoma track and field long jumper and relay sprinter, discovered Pham’s gym not long after it opened and took her exercise science class, as she finishes her master’s degree, to check it out and eventually became a member.

“It was like a dream come true,” Rose Price said of discovering the gym, noting that she was looking to improve her upper body strength after relying on her lower body in track. “HIIT has routinely been the No. 1 or No. 2 most popular workout the last few years because of ease of access, and it’s not as monotonous as traditional workouts. … [Ninja obstacle course training] makes you more in-tune with your body. Being a ninja, you have to be agile, have power and coordination.”

First walking into Pham’s gym, a series of agility-testing jumping pads lead into a rounded sonic corner, which goes into box hurdles and a giant foam ball in which to leap. Around the corner, there is a maze of interlocking frames, each supporting a network of obstacles like a ring jump or rotating metal prongs that take coordinating and timing to finish.

When he first opened the gym, there were 20 obstacles, including the warped wall and the salmon ladder, which requires the user to jump a metal bar to each level to the top. Now, there are over 70 obstacles. Pham said he likes to add to the course every two weeks with a new obstacle modeled after something from the show.

“I never do the same workout,” Rose Price said. “You can change it up by going through the course a different week, but every week, you come in and there is something new. His creativity is amazing.” 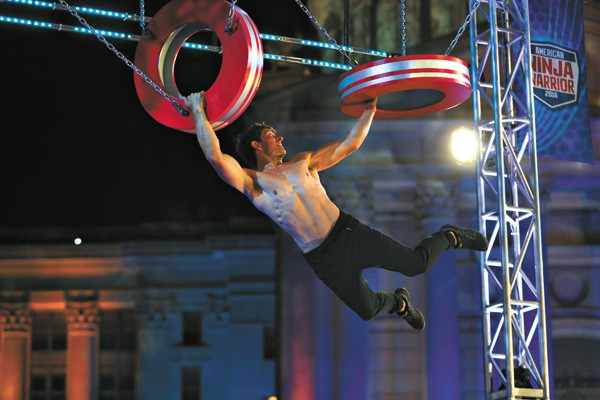 Pham leaps, spins and contorts his body with ease while showing off the course. He said the hardest part of the ANW course is balance because it is always changing. Each frame can be lowered and extra protective padding added for when kids train on the course. They use a scaled-down version of the warped wall, which Pham said is key to conquering in three steps.

“It’s all about taking the leap of faith; the last step has to make the jump,” he said.

Pham’s demeanor is soothing, which is what he said is key to mastering the variety of obstacles on the course.

“It’s like falling through a frozen pond of water,” he said. “People’s heart rates get erratic and they don’t know what to do. If you can remain calm in the air, you can control your limbs.”

As he demonstrates the proper way to climb a peg wall, which requires users to keep one peg inserted into the vertical board while swinging to the higher level, he shows that bodyweight must transfer away from your destination, against conventional thinking.

“He teaches you that you have to fail first,” Rose Price said. “You can tell he really cares about his clients. His personality is very motivating and makes you feel like you’re not terrible, but there were a lot of obstacles that I tried and did terrible my first time.”

Pham works on the confidence of his clients. Many of the adults compete in outdoor obstacle runs like Conquer the Gauntlet and Spartan Race, and he offers team-building exercises for offices. For a team-building activity, participants go through the course individually to find their strengths and weaknesses. It then becomes a tag team competition in which individuals complete the parts where they feel most comfortable. They finish by playing a memory-based game on the rock wall, swinging from color to color in increasingly difficult patterns, like the lighted kids game Simon.

On Sept. 23, Phamily Fun & Fitness hosts its first Ninja Obstacle Course Challenge. Competitors from four age groups go through the course two full times. Unlike the show, where if you fail at a challenge, you are eliminated, Pham’s challenge adds time to their total for each mistake, allowing them to complete the course.

Rose Price said Pham’s challenge is the first in the area of its kind. She competed in a four-mile Conquer the Gauntlet competition in Ardmore earlier in the year.

“It’s slowly growing in Oklahoma,” Rose Price said. “It’s really good for the state, and hopefully it will become part of the culture. It’s saturated down in Texas. It seems like every big city has multiple gyms.”

Pham hasn’t given up hope of making an appearance on American Ninja Warrior. He once again sent in a video submission for the upcoming season, but he won’t rely on it for happiness.

“The show’s producers want a story, and I’m not going to fabricate anything,” he said. “My family came to the United States from Vietnam as political refugees in 1976 with some pots and pans, but I don’t want to exploit that. If I’m not destined to be on the show, that is fine. If I can get other people on there, energize a few kids and then it all makes it worthwhile.”

print headline: Ninja stars, As the popularity of American Ninja Warrior rises, a local gym is providing an opportunity to join in the fun.