Cover Story: Beau Jennings returns to NMF and brings the soundtrack to Will Rogers’ life “I’ve played it most years,” Jennings said of the three-day event, which runs Thursday through Saturday in downtown Norman.

He also knows most of the organizers and a lot of the bands in this year’s lineup.

“It’s a community effort I enjoy being a part of,” he said.

Jennings brings his band, The Tigers, with him to Saturday’s 3 p.m. performance on the Fowler VW Opolis/Blackwatch outdoor stage.

He also brings with him the elaborate instrumentation and story of The Verdigris, a soundtrack he released in January about the life of Native American and Okie cowboy Will Rogers. He said he will play nearly the entire album live at this gig, with help from acoustic and electric guitars, pedal steel, drums, bass, keyboards, gramophone, harpsichord and even recorded samples.

The movie of same name, made with help from Oklahoma-tied filmmaker Bradley Beesley (Sweethearts of the Prison Rodeo, Okie Noodling, and TV series Rollergirls and Paranormal State) is nearly complete and will likely premiere locally sometime this summer. Later this year, Jennings said he will take The Verdigris film and live show on the road with Beesley in a dual-screening tour that includes the filmmaker’s latest short, Calls to Okies, which premiered earlier this year at the South by Southwest festival in Austin.

Jennings first conceived of the album and movie project back in 2007. By 2009, he had filmed the first solo acoustic sets for the movie. By 2011, he had completed a successful Kickstarter campaign to get both funded.

Chronicling the story of Rogers was obvious to Jennings, who grew up near Rogers’ hometown, Oologah.

“It was a matter of geography,” he said. “I was living in Now York City at the time, and I was looking for stuff to write about. The idea ended up bringing me back home.”

This free festival packs in more than 300 performances Thursday through Saturday along historic Main Street in Norman. National headlining acts include Ra Ra Riot and Lee Bains III & The Glory Fires. However, a festival stay would be rather short and unfulfilling without swinging by at least a few of the 18 stages and venues, which include everything from Americana and punk to blues and hip-hop. This year also features a Thursday lineup of local comedy from Ryan Drake, BradChad Porter, James Nghiem, Andrew Deacon and Cameron Buchholtz inside Sooner Theatre on Main Street. On Saturday, comedians Spencer Hicks, Josh Lathe, Heather King, Shawna Blake, Ryan Green, Brett James and Zach Smith perform on the indoor Opolis/Blackwatch stage. Check out Oklahoma Gazette's NMF playlist, here. 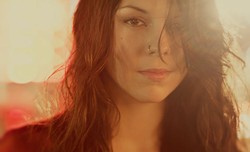 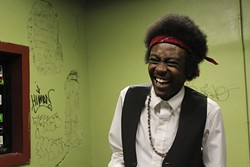 On the cover: The statue of Norman-born actor James Garner as Bret Maverick holds watch near the epicenter of the eighth annual NMF on Main Street. (Photo by Mark Hancock / Illustration by Christopher Street)

Print headline: Fest-ive, Singer-songwriter Beau Jennings returns to Norman Music Festival, and this time he brings the soundtrack to Will Rogers’ life.