Single, cultured, loyal, aloof, dating, apathetic, married, practical or even if you’re The Dude himself, Oklahoma Gazette wants you to enjoy Valentine’s Day. 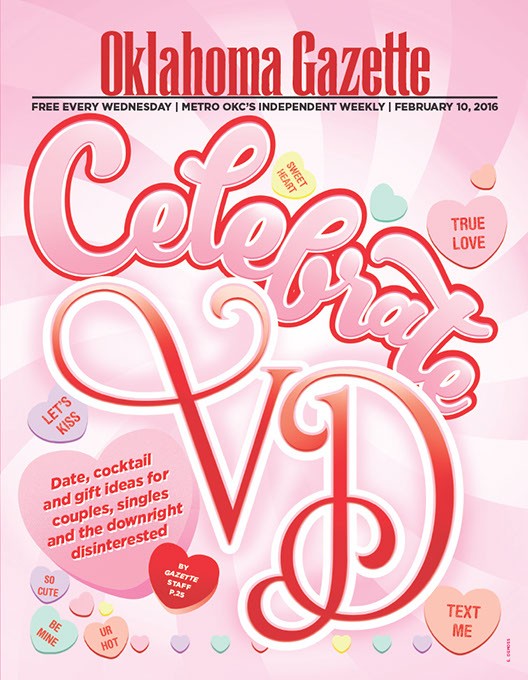 Single, cultured, loyal, aloof, dating, apathetic, married, practical or even if you’re The Dude himself, Oklahoma Gazette wants you to enjoy Valentine’s Day. We’re sharing our curated list of films, events, drink recipes, gift ideas and eateries with you.

So you’re a b----. You don’t give a ---- about committed relationships, rules or Valentine’s Day, and you want this weekend to go by quickly and avoid the idiotic, lovey-dovey people before they retreat back into their boring, khaki-and-sweater-set caves.

Watch: Put yourself in the right frame of mind to survive this saccharine greeting card holiday with Don’t Trust the B---- in Apartment 23 (2012-’13).

Cocktail: Gin Gimlet. It’s June’s favorite drink and you sort of like her and are curious about her choices (but make sure you get a backup in case June’s goody-two-shoes slurp doesn’t cut it). Don’t drink before blah, blah, blah — whatever. If you plan on imbibing, all you need is dry gin, which you can get at Byron’s Liquor Warehouse, 2322 N. Broadway Ave., and lime juice.

Gift: Valentine’s Day is all about gifts, and nothing’s better than a Sunday night out at The Drunken Fry, 5100 Classen Circle, so you can forget all about the holiday and its stupid traditions for another year.

Yeah, yeah; this holiday was created as a marketing ploy to sell cards. Not so fast. Your significant other will likely remind you that St. Valentine’s Day is a genuine liturgical celebration of early Christian saints named Valentinus. Lore has it Saint Valentine of Rome was imprisoned and put to death for performing illegal weddings and ministering to Christians. (Seriously!) He signed his last letter, “Your Valentine.” And that’s where the card-giving tradition originated. Even so, you’re still a practical person, and your bank account is proof. What’s most important is that you spend quality time with the one you love.

Cocktail: Try a three-ingredient Presbyterian: Mix a jigger of Scotch (or substitute bourbon or rye whiskey) with ginger ale and club soda in a Collins glass; fill with ice.

Gift: Swing into Buy For Less and pick up a bouquet of flowers, a box of chocolates and ginger ale or club soda for those cocktails.

To be read in the voice of Sam Elliott: Sometimes, there’s a man. And I’m talking about The Dude here. Sometimes, there’s a man who appears indifferent. He drinks alone. He bowls with his friends, his same friends. But underneath the indoor sunglasses and bathrobe is a romantic’s heart pumping with loyalty. He might not take that commercial junk too seriously, but who wants to be with someone who does that?

Date: Nothing could ruin a night of bowling at the bar and alley inside Dust Bowl Lanes & Lounge, 421 NW 10th St. — unless Jesus Quintana shows up. Actually, let’s hope he does.

Eat: Everyone has to eat, even The Dude. Savory sustenance can be found at local shop Jerky.com. Deep-fried peanuts are recommended, but there are a number of other couch-ready snacks available. The Dude doesn’t see anything wrong with Netflix and snacks on date night.

Cocktail: Don’t think you’re too good for a sweet drink. The Dude’s not. It’s always an occasion for a Caucasian, also known as a White Russian. Vodka, coffee liqueur and cream is the secret formula for abiding.

Gift: You know what you want. Go get it at Mansour’s Rugs, 7220 N. May Ave. They won’t let you take any rug in the house — without proper payment, that is — but if your current floor runner is gone or damaged, a sales associate will be happy to help you find something to tie the room together. 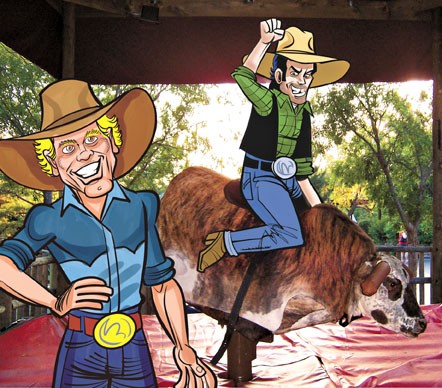 It sure is a fortunate time for folks who like to do their two-steppin’ without leaving the Big Town. Like a rhinestone cowboy, the urban cowboy relishes the glitz of a sophisticated urban lifestyle without leaving the Western wear at home. And there are as many options for pair of cowpokes as there are for a miss and mister or whomever else you want to hogtie.

Watch: Urban cowboy is a fun theme for all real cowboys and honky-tonk masqueraders. John Travolta’s Urban Cowboy, circa 1980, is an iconic image, but maybe don’t emulate him too closely. You should, however, take any opportunity you have to ride a mechanical bull.

Date: Honor your partner and get ready for a toe-tappin’ pre-party at Finishline with country music and dancing inside Habana Inn, 2200 NW 40th St. After you’ve had your fill there, head home — or really just about anywhere — and ride that mechanical bull you rented from Fun Zone, okcfunzone.com. If you’ve scorned your lover over the course of the night, this is your chance to win them back!

Eat: Cattlemen’s Steakhouse, 1309 S. Agnew Ave., is a no-brainer — unless you order the calf brain for breakfast.

Cocktail: If you didn’t like calf brains, a Colorado Rattlesnake shot is the perfect palate cleanse. One part tequila; one part tomato juice; add a dash of Tabasco and black pepper. Wowzers.

Gift: Take your date out to Stockyards City and pick out a pair of boots from Langston’s Western Wear’s flagship store, 2224 Exchange Ave.

For hipsters, Valentine’s Day is pretty much just another day. As some couples review back issues of Oklahoma Gazette to find hot spots to dine on Feb. 14, hipsters ate there Tuesday and already posted a thoughtful Yelp review. Instead, cultured couples choose to view an unparalleled art collection at an area museum, take in a movie and debate life’s meaning. Townies plan to glare into each other’s eyes, push back their side-swept bangs and use witty banter to express their love by saying things like, “When I found you, I found myself.”

Watch: The Last Five Years, Netflix. Adapted from the contemporary musical, the film is a charming tale about a young couple’s relationship. However, the tale skips around in time, with Cathy’s songs beginning at the end and Jamie’s songs starting at the beginning of their love affair.

Date: Oklahoma City Museum of Art, 415 Couch Drive. Go into deep thought viewing The Modernist Spectrum: Color and Abstraction, but follow it up with playful selfies posted to social media.

Eat: O Bar at Ambassador Hotel, 1200 N. Walker Ave. Order an expensive bottle of wine with two glasses and split an order of Bardolino risotto in the upscale rooftop bar.

Cocktail: For a nightcap, head home and create a red wine hot chocolate. Combine 1-1/2 cups of milk with a 1/3 cup of dark chocolate chunks. Whisk constantly over medium heat for a creamy chocolate milk. Next, pour in 1 cup of red wine. Once hot, serve with coconut whipped cream on top.

So you procreated. It happens to the best of us. And while life is a miracle, Valentine’s Day isn’t quite so romantic when you’re trying to get your kid to eat those chicken strips he ordered and now refuses to try. But if you can wear out your spawn with a day filled by running around, maybe you can have a few quiet minutes at night to celebrate the holiday the way it was intended: falling asleep with your clothes on at 9:30 p.m.

Date: The Oklahoma City Zoo, 2000 Remington Place. Get wild at the zoo and let those kids run from exhibit to exhibit in preparation for naptime.

Cocktail: Hit up local fro-yo mavens Orange Leaf for a nonalcoholic cocktail of mix-and-match yogurt cups. (Save room for sprinkles, too.)

Gift: An annual family pass to Science Museum Oklahoma, 2100 NE 52nd St., is a wonderful way to tucker out those children on the regular. A Silver 6 membership gains entry for six people all year long for $145. That means you can let the grandparents take them while you get brunch.

Print Headline: Valentine’s saint, Some call it The Day Love Costs Money, Singles Awareness Day or even Nuzzle Buddy Day. Whatever you call it, we offer holiday treats you’ll enjoy.