Not everyone is a steak expert, but cooking up a sizzling sirloin or a fall-apart tender filet is a learned skill. So let’s learn.

The United States Department of Agriculture (USDA) recommends the average person eat between 5 and 6 ounces of protein a day.

It’s like the USDA has never even heard of steak.

Head over to any of Oklahoma City’s numerous prime steakhouses and you’ll find that most menus feature cuts of beef starting at 7 ounces and climbing up, up, up to 21 ounces, 22 ounces, 24 ounces. (For your reference, one pound is a scant 16 ounces.)

Why so big? Maybe because steak, for most of us, is an extravagance. When we go out to eat, we want the food we love in massive portions, cooked by people who know what they’re doing.

But their expertise, fancy tablecloths, polite servers and full-service bar often also include a high-class price tag. Plenty of 7-ounce steaks start at $30, and that doesn’t include sides. The prices, like the sizes, can rise to $80 and $90 for big, high-end pieces of meat.

So why not cook your own?

Fair enough. Not everyone is a steak expert, but cooking up a sizzling sirloin or a fall-apart tender filet is a learned skill. So let’s learn. 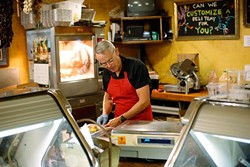 Every restaurateur, chef and butcher says the same thing. The easiest way to ensure a great steak is to start with a great piece of meat.

Prime beef is selected based on quality and what Kamp called intense “lightning bolts” of fat marbling.

“We have some wonderful prime cuts. Only 3 percent of beef processed makes that grade,” Castelli said. “I usually recommend a rib-eye or a strip because you’ll see more marbling and, therefore, more flavor.”

Some butchers also offer a choice between 100 percent grass-fed beef and those that are grass-fed early and finished off with a diet of corn. The all-grass-fed steaks are pricier, but some say they have a better texture and healthier fat.

But if prime is out of reach, don’t look past “top” or “upper two-thirds” choice, said Kamp. There’s still plenty of flavor and tenderness to be found, especially in the nicer cuts.

Billy Wilson, proprietor at Opus Prime Steakhouse, said his choice is always a tenderloin, so named because it’s a muscle that cows don’t use much, giving it an extremely tender texture.

For more flavor, he recommends a rib-eye, a fattier cut that comes from a cow’s ribs, though a strip steak is often a good compromise.

Tanner Snow, supervisor at The Meat House, 2249 W. Danforth Road, in Edmond, said once you’ve chosen your steak, you have to remember how cooking actually works.

“If you have a big, thick steak and you take it directly from the refrigerator and put it on the grill, you’ll end up with it charred outside and raw inside,” he said. “Let your steak sit out for 25 minutes to get up to room temperature first.”

Kamp said the choice between charcoal and propane is a personal one. Charcoal gets hotter and imbues steaks with that traditional grill flavor, but it’s harder to regulate temperature. Gas grills require less forethought, but when you’re out of propane, you’re out of heat.

Rococo’s owner and executive chef Bruce Rinehart said a must is a clean, well-seasoned grill grate. The last thing you want is to spend $40 on steaks and leave big chunks of meat stuck to the grill.

“When I say seasoned, I mean cleaned and rubbed down with oil,” he said.

Let the grill get nice and hot, and use a long-handled wire brush to scrub off anything left over from previous misadventures. Then, use tongs to dip a wad of paper towels in vegetable oil and to rub the oil over the grates.

Seasoning the steaks is another matter. For a tougher cut, like a skirt steak or a London broil, Rinehart recommends a marinade. Avoid marinades with too much acid and leaving your steak in the marinade more than an hour, though, as it can leave meat mushy.

For a rib-eye, filet, strip or other expensive cut, a simple rub of salt and pepper gives the steak life without overpowering the flavor of the beef. Don’t overdo it with oil, either. A thin layer helps the meat release from the grill, but too much inhibits browning.

One secret ingredient in marinades and rubs might seem counterintuitive: brown sugar. The sugar helps tenderize the meat, and when it hits the burst of flame on the grill, it caramelizes the crust.

If you’re using a marinade, dry off the steak before cooking it. Wet meat will simply steam on the grill. Blotting the surface with a paper towel makes sure the heat produces browning, also called a Maillard reaction, which is essential to creating that classic steak flavor.

Kamp said he often turns to hardwood charcoal in his grill simply because it creates an intensely hot and long-lasting fire.

Again, it’s important to understand that cooking a steak isn’t some magical spell. It’s all based on simple science. Heat hits the side of the steak facing the fire first and travels up from there. For a very thick steak, that might mean the crust is blackened before the center hits rare.

A way to get around this problem is by building a “two-zone” fire. Pile most of the charcoal on one side of the grill and only a few on the other, or in the case of gas grills, turn the burners on high on one side and keep them relatively low on the other.

Once the steak is browned on both sides, move it to the cooler side of the grill to let it continue cooking at a lower temperature, allowing the heat to travel to the center without overcooking the exterior.

Undercooking isn’t great, Kamp said, but you can always cook it some more. You can’t uncook an overcooked steak.

“Pay attention. Stand there and watch it. Take notes. Be a scientist,” Kamp said. “Understand what you used, how you seasoned it, the fire, everything. Then play with variables.”

How can you tell if it’s “done”? There’s a classic method: Push it with your finger, Kamp said. If it’s still squishy, it’s not where you want it to be.

“If it’s a big enough piece of meat, you can take its temperature,” he said. “Take it off the fire and use a small probe in the side. Don’t measure from the top or you might go too far and misjudge how done it is.”

A medium steak is cooked to 140 degrees. A medium-rare steak (the best) is cooked to 130-135 degrees. Consider taking steaks off the grill about five degrees shy of done, as they will continue cooking with residual heat while they rest.

Those who don’t have a grill or are simply looking for a greater degree of control might find an ovenproof skillet useful. Searing the steak in a super-hot pan and then transferring it to the oven can create a similar method to the grill without spending all that time in mosquito country.

Wilson said that once the steak is off the grill or out of the oven, it’s vital to allow it to “rest.” Cut into a steak too soon after cooking and you’ll lose a lot of moisture. Let steaks sit for five minutes or more as they redistribute juices and finish cooking. Opus Prime uses an inclined plate so the steak isn’t sitting in any moisture that is released, which could alter the crust.

If the meat was seasoned correctly before going on the grill, it might need nothing more than a pat of butter to create that glistening steakhouse look and rich taste.

Cooking for a crowd? Rinehart said to consider cooking a larger cut of beef — flank, London broil or top round — and slicing it up afterward.

One of Kamp’s favorite cuts is the tri-tip, which is a large roast that’s extremely popular in California for grilling. Because it’s large, it’s easier to control the interior temperature. For maximum tenderness, slice a tri-tip thinly, against the grain.

Grain is the direction of the meat’s muscle fibers. Cutting with the grain creates long, chewy strands of beef. Cutting against the grain makes for shorter strands and meat that’s much easier to eat. 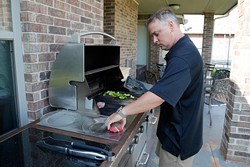 Though beef is the most popular, other animals make great steaks. Castelli showed off cuts of buffalo steak in the Whole Foods case and praised the meat’s rich flavor, low fat and high omega-3 fatty acid levels.

The Meat House still carries some buffalo meat, but Snow said the steaks didn’t sell well to his customers. He offers ground buffalo for burgers, but customers need to make a special request for other cuts.

“We can special order anything, but we can’t carry everything in the case all the time,” he said.

Steak prices vary from shop to shop, but choice beef can often run $20-$40 per pound, depending on the cut. Prime beef, which is harder to come by in stores, can be $30-$50 and up by the pound.

Bill Kamp, owner of Bill Kamp’s Meat Market, said prices stay high because demand stays high. But in 30 years of cutting beef, the steaks and roasts he’s seeing now are better than ever before.

“These are really consistent, beautiful and well-marbled,” he said. “They’ve never been better.”

Which is part of why Kamp rarely orders a steak when he goes out to eat.

“I can’t get a steak as good at a restaurant as I can at the meat counter,” he said.

Of course, it doesn’t hurt to own a meat market, either.