Cover Story: Classen Boulevard becomes an outreach hub for many of the city's most at-risk citizens

In mid-2015, as staff members at Sunbeam Family Services moved out of their longtime location on NW 21st Street and into a new headquarters at 1100 NW 14th Street, they were greeted with a large welcome banner hung by their new neighbors at Catholic Charities Archdiocese of Oklahoma City.

At the time, Patrick Raglow, Catholic Charities executive director, was heading up his own transition into a new facility just across the street and noticed a positive trend developing along Classen Boulevard.

“We were gearing up for this project and Sunbeam was just completing their facility, and we were really happy to have them as a neighbor,” said Sonny Wilkinson, Catholic Charities senior director of mission advancement, development, media and public relations. “Patrick and I were looking around us, and it became clear that this area, this corridor, was becoming a social service hub.”

Geographic proximity led to greater opportunities for the nonprofits to collaborate and support one another. Catholic Charities, United Way of Central Oklahoma, Sunbeam, Positive Tomorrows, City Rescue Mission and Jesus House operate within two miles of each other and are conveniently served by a major bus route, meaning clients can access services with increased ease and efficiency.

“We have all these other districts in the city; why not have one that is truly transformative?” Wilkinson asked.

“[Raglow] and I talked about it when we moved our offices from NW 21st to NW 14th and Classen,” Priest said. “We were right across from Catholic Charities, but to our knowledge, Sunbeam and Catholic Charities had never worked together on any projects. It was really a question of geography that prompted me to think, ‘Why aren’t we doing something with this other wonderful organization that does very similar things?’”

That possibility for interconnectedness only grew when The Education and Employment Ministry (TEEM) purchased Catholic Charities’ former building and moved from its NE 13th Street location on the edge of Midtown.

“There’s a degree of overlap and an extreme amount of camaraderie between us, Catholic Charities and Sunbeam Family Services,” said Lance Evans, TEEM public information officer. “In a lot of ways, we’re serving the same community — at-risk Oklahomans — but our services are tailored to serve a specific niche.”

Evans credits Raglow’s direct outreach for making it possible for the interfaith organization to acquire the venue from the Archdiocese of Oklahoma City.

“When they began their process of moving, he directly came to us and talked about how this building could help in our next 28 years of service,” he said. 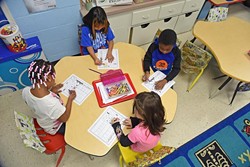 From a physical standpoint, the new Catholic Charities building provides the surest visual confirmation that the corridor of hope is an area of growth.

While one proposal called for an approximately $3 million renovation to the previous location, the transition to a new building allows for future expansion as well as the opportunity to help a fellow charitable nonprofit like TEEM.

Wilkinson said while each organization addresses specific sets of needs, the work being done in the corridor of hope is all about outreach and uplift.

“It’s about recognizing the dignity of a person who’s coming to us in a time of need,” he said. “When they’re coming to us, they’re coming to us at the low point of whatever situation they’re in. They need help, and that’s why we’re here: to lift them up and help them through the process. When you walk into our lobby, it creates a sense of comfort.”

That comfort was accompanied by faint rumblings of discomfort in surrounding neighborhoods as residents voiced concern over an influx of at-risk individuals, Wilkinson said.

But he said Catholic Charities and other corridor members are interested in the long game: healing individuals as a starting point toward a greater, community-wide vitality.

This summer, Sunbeam Family Services paid forward its warm welcome from Catholic Charities by hanging a banner welcoming TEEM to the corridor. Priest said the nonprofits plan some joint charitable events to coincide with the holidays and more interconnected giving will be offered for years to come.

“I think collaboration is key for nonprofits in this next generation, and the physical proximity of our agency really spurs that to fruition,” Priest said. “We can be a thousand points of light, or we can join together to form a laser beam and make a real impact. The corridor of hope gives us the opportunity to join together, geographically and functionally, as a laser beam.”