OKC’s creative talent is avoiding mass-produced goods and picking up the tools and knowledge to make things themselves. Creation is an act of defiance.

Where there is nothing, creation puts something. For a group of Oklahoma City creatives and entrepreneurs, there is no way of life but to make. Whether sewing together felt robots, carving down giant blocks of wood or putting bubbles into a bottle of soda, they are driven to fill the void. 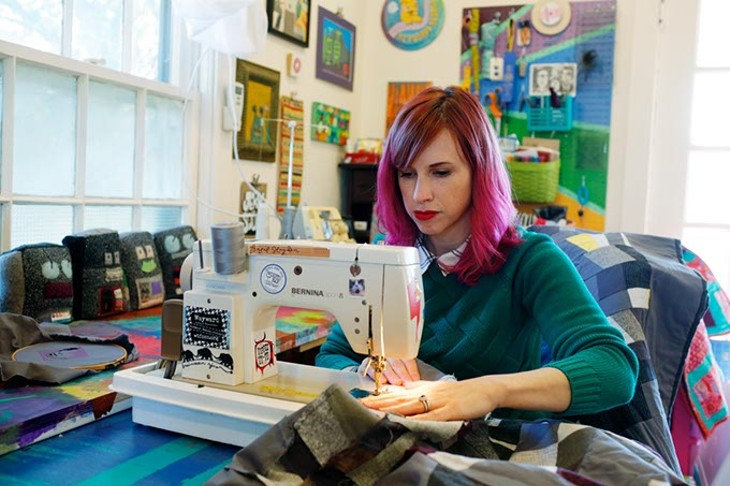 “People don’t know how to do anything anymore,” Sarah Cowan’s grandmother told her.

It was one of the last coherent conversations the two had, and that message — to be able to make and do the simple tasks of a bygone era — stuck with her.

Cowan, a Forty Under 40 winner in 2014 (see this issue for the Class of 2015), founded Deluxe Winter Market as a showcase for a group of local Etsy sellers who wanted to connect with the community. Since its debut in 2008, the annual event has grown in popularity and shrunk in size as the strictures of the market have become more demanding.

“We have a strict anti-tutu and hair bow policy,” she said. “We want carefully curated collections. It makes for a more intimate, thoughtful experience for shoppers, and it’s more special when vendors are chosen.”

This year’s market, scheduled Nov. 28 and 29, will feature 59 vendors, artists and collectives with a variety of wares. One booth that will be conspicuously missing is Cowan’s own. Her output is too sporadic and eclectic to fit the guidelines Deluxe demands. And that’s okay by her.

“I would much rather promote others’ work than my own,” she said. “There are so many cool people doing things right now. If people enjoy it, I would like them to spread the word.”

Her crafts are more personal. She has a cross-stitch piece featuring Garth Brooks as Chris Gaines that she has been making for nearly eight years. Maybe it’s not something everyone else is interested in, but that’s why she does it for herself.

That’s part of the impetus behind her OKC Art Team initiative: giving people permission to call themselves artists. Not everyone, she said, can put paint to canvas or sculpt, but that doesn’t mean they aren’t making art.

Cowan has been teaching herself to make clothes. She taught herself to make chicken coops. She has a compulsion to be productive, even if it isn’t bringing in income, and it’s spreading to others.

“I’ve been teaching a sewing class after school, and the kids in the class told me it was their favorite part of the day because they could sit together, working in quiet,” she said. “Sitting in quiet with others is very unique.”

And with that quiet circle comes a different satisfaction: giving another generation the ability to create. 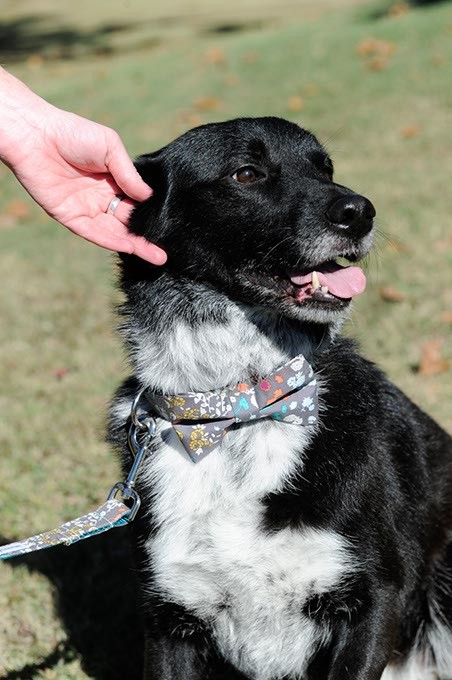 As a veterinarian technician, Crystal Young sees her fair share of dog collars. Mostly, she encounters pups with mass-produced, solid-color, easy-clip, nylon collars wrapped around their necks. Occasionally, a dog might sport a more decorative or leather collar.

Like other pet owners, Young understands the lack of options when it comes to buying collars. She could never find collars that fit her three dogs’ personalities. So she switched collar shopping with buying fabric, nylon and metal buckles.

“I borrowed my mom’s sewing machine, and I taught myself how to sew,” Young recalled. “It just grew from there.”

K9 Couture offers modish, durable and often funny collars in six sizes. Like a typical collar, the dog owner will find a welded brass D-ring leash hook and a curved side buckle to contour the collar to fit the pet’s neck. What makes the collars a treat is the unique fabric sewed on the nylon. Soft fabrics feature designs of owls, foxes, wildflowers, colorful shapes and more.

There are even collars designed for fans of Star Wars, Harry Potter, Madonna and the Oklahoma City Thunder. The Thunder-themed collars are some of the most popular, along with the mint julep design. Additionally, Young creates custom orders, which translates to a dog sporting a one-of-a-kind collar. A percentage of each sale benefits Oklahoma Humane Society.

The positive response to K9 Couture has transitioned Young to working part-time at the vet clinic and spending more time making the collars. She admits the business takes time and hard work, but the reward is seeing happy dogs. Many customers take to social media to post photos of their dogs in the collars and tag K9 Couture.

“We have really been embraced by Oklahoma City,” said Young. “I think every city has a pocket of people that encourage and inspire other local artists. We’ve been very lucky to fall into that.” “I was a terrible cook,” said Little in the Middle founder Katie Pennington.

Dinner had to get on the table, but her kids couldn’t eat frozen chicken nuggets every night. So she set about getting better through science.

“I started reading these very old Southern cookbooks, and they all had different ways to make things that are really convenient,” she said. “I didn’t know where to begin, so I thought, ‘What’s better to start with than dessert?’”

“Why can’t they be super-awesome?” she asked.

Initially, her family choked down some rough batches, but her recipes and methods evolved.

“I treated it like a science experiment,” she said. “My mom ordered some for the nurses at the office, and they said they were the best they’d ever had. So I thought I’d give it a try selling them.”

She set up a Facebook page (facebook.com/littleinthemiddleokc) and takes orders and makes pans of warm, gooey, sweet-but-not-cloying cinnamon rolls that put the state fair version to shame.

“It’s nice to make extra money, but this is satisfying on another level,” she said. “I’ve tried different creative outlets. But baking is fun for me. It doesn’t feel like work. It makes people happy.”

Pennington’s art has been featured on local prints and in Oklahoma City art galleries, but that’s not the same.

“When you draw or paint, you can put your heart into it and love it, but there’s no guarantee anyone will like it,” she said. “With baking, you know right away if it’s good. People can’t hide it.”

She’s not making a career out of it — though a little extra money is nice to have — but her adventures in baking are far from over.

It wasn’t a traditional Christmas present by any means, but it was just want Hali Lawrence wanted.

On Dec. 25, 2013, her husband Michael woke up extra early to hook the couple’s laptop to the television. Later in the morning, when Hali entered the room, her eyes went to the television, which showcased the recently created homepage to NorthRoad Creations, the small business the two had dreamed of launching. As a Christmas gift, Michael Lawrence created the website and began the business’ social media campaign. The next step was to start selling their products.

Months earlier, the couple transformed their two-car garage into a woodshop. There, Hali refurbished furniture and Michael tinkered with broken lawnmowers and chainsaws. Their crafts soon changed after Hali read a blog post geared toward creating wood Christmas ornaments with a jigsaw.

“I went on Craigslist that night, found one and we had it the next day,” recalled Michael.

The new equipment allowed Hali to create palm-sized cutouts of the continent of Africa, which she sold as ornaments to raise money for an upcoming mission trip to Uganda. The ornaments were a success, as the couple raised around $400, but it also sparked their interest to see what other items they could make.

With ingenuity, mixed with trial and error, the couple developed their distinct woodworking craft.

Today, the two produce Oklahoma-themed decorative signs, cutting boards, ornaments and more. Items are listed on the couple’s website, but they also set up shop at local festivals and craft shows. During booth sales, they showcase their wooden signs in designs of scissortails, the 405 area code and the word “homa.” Some signs are backlit with LED lights.

“It has been a fun avenue,” said Michael. “Not a lot of people are out doing what we are doing.”

The two say a tweet on Twitter turned the Plaza District’s DNA Galleries on to NorthRoad Creations. About 14 months ago, the couple began bringing the shop Oklahoma cutting boards created from hickory wood.

“That kicked off a whirlwind,” said Michael. “It has been nonstop ever since.”

The Lawrences say they couldn’t have imagined the kind of success they’ve experienced. They are astonished when online orders come in requesting seven snowflake ornaments or a handful of Oklahoma cutting boards. To keep up with demand, the two dedicate all their free time — evenings and weekends — to their workshop. Both Michael and Hali maintain full-time jobs outside of their small business, but the two hope to expand into Tulsa boutiques.

“We like the creative and making part,” explained Hali. “We are trying to learn the business part.” Bacteria got a bad rap.

For years, bacteria was lumped in with germs and viruses as the things we needed soaps and medicines to wipe from the face of the earth. Slowly but surely, we’re learning how important bacteria are to health.

That’s where Jared Toay comes in.

He’s the creator of Jared’s ProPops, a collection of probiotic popsicles, sodas and snacks, and he said it took years of poor health to set him on his current path.

Feeling terrible, Toay began researching nutrient-dense, fermented and probiotic-rich foods. The results were striking. In a year and a half, he was doing bodybuilding competitions with a physique crafted solely by his diet.

Getting his kids on board was another matter entirely. He turned to fruit and vegetable juices to make the fermented products less sour, and that’s when he hit upon a novel idea: freezing them.

“The health benefits don’t go away as long as the bacteria are in a cold state,” he said. “Bacteria hibernates in the cold, and putting the juice into popsicle form makes it more palatable.”

At Urban Agrarian and street festivals, Toay sells his probiotics-on-a-stick to rave reviews. His next step was using the effervescence of the bacteria eating sugar to create sodas in a variety of flavors.

Root beer and cherry cola are big sellers, he said, but as customers embrace the unique flavors, they get more daring. His lavender lemon balm lemonade flies off the shelves — which is good since the soda, unlike the popsicles, has more of an expiration date.

The products bring joy and health to others, but the fire in Toay’s eyes and the excitement in his voice when he describes the sense of discovery and accomplishment in his creations belie a deeper sense of satisfaction.

Can anyone teach themselves how to make their own drinks, clothes, sweets, collars and furniture? Of course.

But makers are the ones who turn possibility into creation. Cowan’s grandmother would approve.

Print headline: Meeting makers, OKC’s creative talent is avoiding mass-produced goods and picking up the tools and knowledge to make things themselves.