Cover Story: Diet, not lack of exercise, is behind Oklahoma’s ballooning waistlines

Chairs are killing you.

And so is fast food. Plus, you’re not exercising enough. Your body is full of toxins that need to be flushed out. Put down that soda. Cut the carbs. Go vegan. Eat whole foods. Go paleo. Try CrossFit. Is that salad dressing low-fat? Actually, it’s all genetics.

If that last one is true, then Oklahoma is in trouble, because a full 33 percent of the state’s adult population is obese, according to the Centers for Disease Control and Prevention.

Not overweight. Obese. Not a little chubby around the belly, but an excessive amount of body fat compared to lean mass.

As if that statistic wasn’t sad enough, Oklahoma isn’t even the most obese state in the union. Five states weigh in ahead of us.

How did it get so bad?

“This probably isn’t the smartest thing for a personal trainer to say, but exercise isn’t our biggest problem,” said OKC Mobile Fitness owner Rick Thomas. “Diet is more important than exercise on the whole.”

Thomas doesn’t discount the importance of working out, but when it comes to obesity, what we eat has more impact than how we exercise.

“Fitness level can change things for the better, but fixing the diet is the No. 1 thing that has to change,” he said.

“If I eat 3,000 calories of carrots and broccoli every day, I’m going to gain weight,” she said.

Of course, to get that many calories from those two foods, you’d need to eat a combined 18 pounds of them. But the principle is the same.

Not that any of us need to worry about a sudden shortage of those vegetables or any others. The 2014 State of the State’s Health Report said one in four Oklahomans eat less than a vegetable per day: It bottoms out at No. 44 in the nation.

Oklahoma ranked No. 6 in obesity and No. 44 in vegetable consumption. Maybe there’s a link?

“There are so many experts out there saying different things,” Conway said. “It can be confusing for anyone.”

But there’s one type of food that everyone agrees should be eaten, and it is one Nourished Food Co. specializes in: dark, leafy greens.

“They’re full of micronutrients and fiber and protein,” Riddle said. “They fight obesity.”

Why isn’t everybody eating this stuff?

Cooking is more work than not cooking, Thomas said. And that’s our downfall.

“When people want me to design a meal plan for them, that’s a specific process,” he said. “But if you want to make one change that will have an immediate impact, stop eating out so much.”

When you prepare your own meals, using fresh ingredients, not just processed food from a box, Thomas said, you can control what you’re eating. Restaurants make things easy, but they also use a lot of ingredients people wouldn’t normally cook with.

“If someone is looking to increase the amount of time in a day, food is one of the first things to go. ‘Order something quick!’” he said. “And if they are looking to cut costs, they’ll bargain shop for food.”

And the fruits and vegetables we do get don’t always taste like they’re worth it, Hildebrand said.

“A lot of fresh fruits and vegetables are grown in California or Mexico and they’re picked before they’re ripe,” she said. “When you don’t get foods picked at the optimal time, they’re not full of flavor.”

To get vegetables that taste better, consumers often need to visit farmers markets, but that produce costs more. For the state’s economically challenged residents, the time and expense that often requires also means shopping local often isn’t an option.

We could grow our own, Hildebrand said, but in addition to the space and time needed, Oklahoma’s seasonal growing periods are tough for novice gardeners to master. Besides that, extreme temperatures in the summer and winter keep people inside.

(That might also contribute to that lack of exercise thing.) 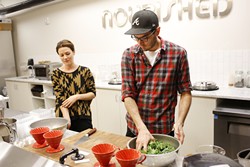 There’s a problem of perception when it comes to eating better, Conway said. People start working more vegetables into their diets, eating whole foods, and then it gets old.

“Eating the same thing over and over again gets boring after a while,” he said. “We update our menu on a weekly basis, but big changes happen seasonally.”

He and Riddle are firm believers in experimentation, especially with different spices and foreign cuisines.

“If it doesn’t taste good, we don’t want to eat it,” Riddle said.

Neither Thomas, Hildebrand, Riddle nor Conway advocate for a vegan lifestyle — just a more balanced diet.

Nourished sells kale chips and gluten-free chocolate chip cookies, but the proprietors still enjoy indulging in a cheeseburger now and again. (Though they opt for grass-fed beef and gluten-free buns.)

“When I think about how I am now and how I was before, the difference is the awareness level,” he said. “I just didn’t think about it a whole lot. I shoveled it into my mouth and didn’t equate what I was eating to my physical condition. Increasing awareness about what you’re doing in your diet goes a long way.”

Hildebrand subscribes to the advice of noted food writer Michael Pollan who said, “Eat food. Not too much. Mostly plants.”

But she also said it’s naive to expect everyone to be on the same footing when it comes to making food choices.

“I once talked to a low-income mother who was buying a tray of vegetables for her family once a week,” she said. When others criticized her for being wasteful or not thrifty enough, she told them her home had no running water, no cabinets and no refrigeration.

She was doing the best she could with what she had, Hildebrand said.

Hildebrand said people who want to shrink Oklahoma’s obese population must make their own changes at home and work as a community to give others the same opportunities.

“Are we making the healthy choice the easy choice?” she asked.

One project she’s working on is a program to bring scratch cooking back to schools by bringing chefs into cafeterias for one-on-one consultations. Much like nutrition at home, she said there’s no one-size-fits-all solution.

“Our goal is to increase basic food preparation skills with regional trainings. We did 15 across the state last summer,” she said. “The next step is to work with the schools individually by putting a chef in the school to look at their menus, facilities, equipment and staffing.”

Incremental changes at the school level can also work at home, Hildebrand said.

“Drink one less sugar-sweetened beverage per day. Eat out one meal less per week. Skip one dessert,” she said. “Hopefully, when people start to see positive changes, they’ll be like, ‘Yeah, this works!’ and figure out their next step.”

That next step might be taking more steps, Thomas said. Though diet has more impact on obesity than exercise, it definitely has its place in a healthy lifestyle. But people have to get out of the “no pain, no gain” mentality.

“People seem to think with exercise, if you suffer, you’ll be rewarded for it. Or that if you’re resting, you’re dying,” he said. “That’s the negative mythology of our society.”

The key is finding an exercise that’s enjoyable, Thomas said. If you hate running, you’re not going to run every day. The best exercise is the one you don’t realize is work because you’re having too much fun.

Even more important than diet and exercise, Thomas said, is sleep. That’s the bedrock of health.

So before you get off your butt to exercise, make sure you’re on your back enough the night before.

Obesity is killing us, Hildebrand said. Worse, people think they don’t have a choice.

“Health affects everything,” she said. “Before I changed the way I ate, I wasn’t a good human. I wasn’t nice. I’m really nice now.”

Sources: The State of Obesity, a project of the Trust for America’s Health and