The business of fun is still a business.

There’s a look of dismay and guilty fun painted across the faces of Mike and Marty Dillon as they look at the Wall of Bad Ideas inside one of their Party Galaxy stores at 300 N. MacArthur Boulevard.

Marked 50 percent off, the costumes on this aisle enable the Dillons to see their hubris and missed predictions in full color. Not many people are dressing up as Hannah Montana or Sue Sylvester from Glee these days.

But they don’t hold a grudge. They just let the stock winnow away to nothing while more popular costumes fly off the shelves. That’s life.

In the month leading up to Halloween, the Party Galaxy co-owners’ lives are busy — fifteen hours a day, seven days a week. The rush begins in late September and ratchets up to a breakneck pace by the time Oct. 31 finally hits.

Unlike Christmas, “which happens and then it’s over,” Marty said Halloween has a week or two of costume parties and trick-or-treat events that call on adults and kids alike to transform into someone or something new. 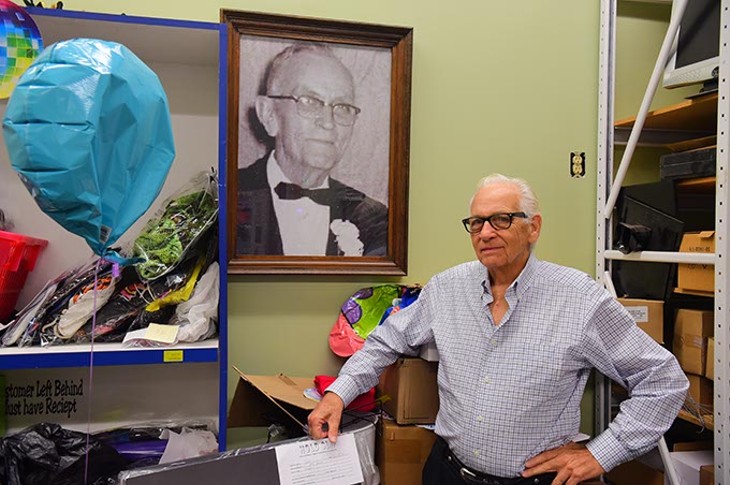 Transformations are nothing new to the Dillons. About 12 years ago, they transformed MG Novelty, the company started by their grandfather, Michael Guy Dillon, and run by their father Bill and uncle Royce, into Party Galaxy.

(Their cousins, Mark and Donald Dillon, split off the importing side of the company into Oklahoma City-based Dillon Importing Co., Inc.)

Novelties, said Mike Dillon, hold a different connotation these days. But everybody can enjoy a party.

Throwing a party is a little harder, said Marty Dillon, which is where the training really comes in for Party Galaxy’s staff. Employees need to be the expert voice to guide people through planning a shindig.

“The key to a great party is knowing the room,” Mike said. “You don’t want a room that seems empty, but you also don’t want to spend a fortune filling a room with expensive decorations.”

Party Galaxy’s staff learns little things, like how many balloons look good on a table or how an 80-cent roll of crepe paper can make a big difference in a room’s appearance. Manufacturers are also addressing that need with something called “scene setters” — giant, themed posters that are easy to hang and help decorate an entire wall for around $7. 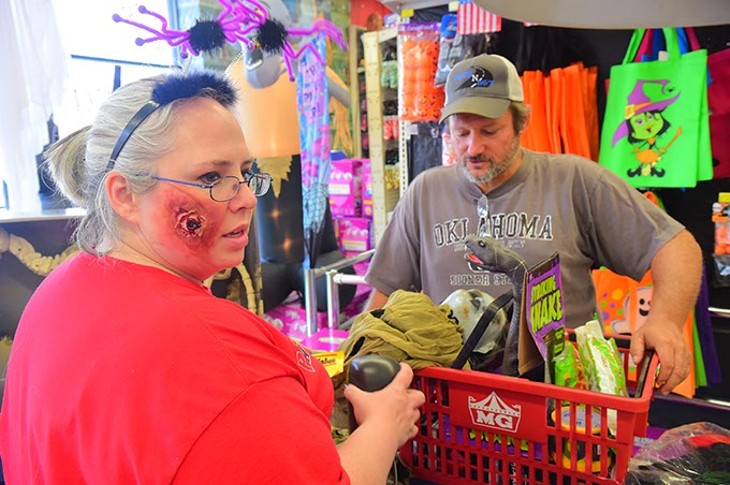 To grow the business, the Dillons moved away from large margins and embraced volume sales. A combination of personalized customer service and competitive prices on costumes keeps them going in a world where Sam’s Club, Target and Amazon are constantly trying to cut out local businesses.

The most basic of kids’ costumes — witches, fairies, cowboys, pirates — start around $6.99 and grow as customers begin looking at licensed properties and flashier accessories.

One of the most expensive costumes Party Galaxy has sold is a $500 deluxe Stormtrooper outfit from Star Wars.

But most sales fall into the $50 range, which is still a bit mind-boggling to Mike.

“When we first got into costumes, we never thought people would spend more than $20 on one,” he said.

They’ve found that the biggest surprise sellers are well-made costumes for toddlers. The outfits for very small children are fluffy, comfortable and get a lot more use than just one night trick-or-treating, Mike said. Given the chance, kids will dress up as their alter egos about as often as possible.

“We bought a few, thinking we’d give it a try, and they were sold out immediately,” Marty said.

Costumes are a real guessing game, but one the Dillons have tried to turn into a science. They keep tabs on TV ratings and movie box office receipts and also are turning their attention to trends in video games to predict the costumes they’ll order next Halloween.

“We bought heavy on Frozen, but not heavy enough,” Mike said. “That’s been the biggest licensed product seller in the last 15 years.”

Even when their sales rush is over, Party Galaxy is immediately getting ready for next year with visits to trade shows across the country. And when there’s a costume idea they like but the product isn’t there yet, they turn to their friends in manufacturing to create a better one. That’s how they turned some ordinary work shirts into some of the most authentic The Walking Dead police outfits around.

Sadly, a little of the magic is lost on the Dillon boys. They’ve spent so long looking at costumes as commodities that they don’t have quite the same sense of wonder as many customers.

“It’s like ... well, here’s an example. The business used to sell a lot of stuffed animals,” Mike said. “After awhile, they just didn’t mean much. In our bedrooms growing up, there weren’t any stuffed animals.”

Their father, though, has been away from the business long enough that Halloween is fun again.

“Dad does lots of inflatables in his yard. I think he gives away, what, like 400 pounds of candy every year?” Marty said. “He gets dressed up as a ghoul. He’s got enough distance to enjoy it again.”

Like many of their male customers, the Dillon brothers have a bad habit of last-minute Halloween shopping. Their houses might be all decorated with tombstones and cobwebs, but their costumes are purely panic-driven, a condition that has helped inform the business.

Among the $50 and $75 costumes are a few shirts and masks that they call the “cool guy” costumes. Not everyone is willing to put in the effort to make a great costume, they said. So they have a few mix-and-match items and costumes that require less investment.

Meanwhile, there’s also a big trend into DIY costumes, which is why the stores put a lot of effort into stocking accessories needed to set apart an otherwise basic outfit.

Party Galaxy certainly gets busier near Halloween, but the Dillons say the bread and butter of their business is party goods. And Mike said even that requires a bit of prognostication and trend spotting.

“Color schemes are a slow evolution, but you start to see more people asking for mocha-colored table runners and fewer people wanting turquoise balloons,” he said.

The lynchpin of the business’ day-to-day operations is still listening to customers. When people want something, they’ll tell you, Marty said. Buying things a year out is always tricky, but it helps when you hear it straight from the customer’s mouth.

“In the end, we’re just trying to make an educated guess on the mind of a two-year-old,” Mike said, smiling.

And if they’re wrong, well, it’ll just be another odd costume on the Wall of Bad Ideas.