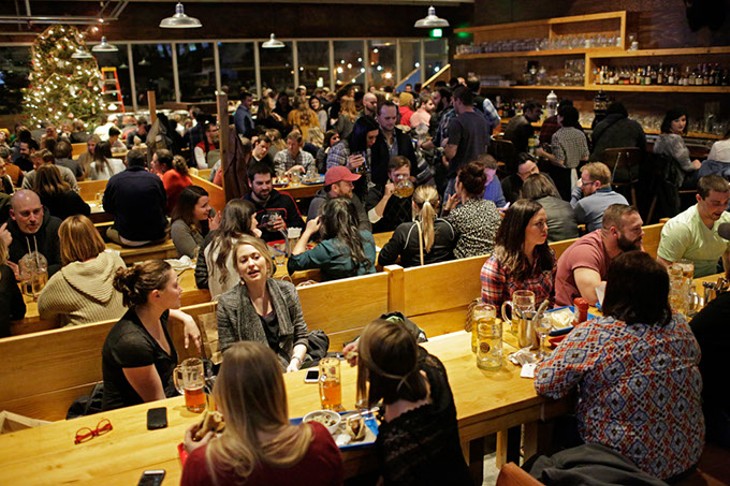 What’s not to love when you walk into Midtown’s first bowling alley and lounge? You would have to be hard-pressed not to get a smile on your face when you see the action going on at Dust Bowl Lanes & Lounge. Every detail is charmingly nostalgic, from the retro color palette to the food, which consists of primarily bowling alley fare with a McNellie’s-class twist, meaning fresh ingredients and careful preparation. The menu alone is enough to make you smile, especially if you are of a certain age and notice a dessert item called The Ziggy Piggy. It is said to feed up to 20 people. If only it came with a tricorn hat.

Dust Bowl even has private party rooms, complete with fuzzy carpeting and lounge chairs. The bar features padded leather bumpers, and a grand chandelier dominates the room and bathes it in gentle mood lighting. And that’s just the first floor.

Above the bowling alley is Fassler Hall, a huge, inviting beer hall with shared tables, strings of twinkling lights and some serious beer and sausages. McNellie’s Group opened two entertainment venues in one, with Dust Bowl open to all ages.

When McNellie's Group decides to do something, they go all in.  The group first set up operations in Midtown with James E. McNellie's Public House, 1100 N. Classen Blvd. McNellie's was one of the first proprietors to move into the space that once was mostly offices and empty retailers. Within the last five years, Midtown has been experiencing a renaissance, and occupancy far outweighs empty businesses. H&8th Night Market and The Bleu Garten, 301 NW 10th St. brought more attention to Midtown than ever before. All the while, construction on Fassler Hall and Dust Bowl Lanes quietly moved forward.

It took on the appearance of a parking garage until — in what seemed like overnight — the details of the venue emerged.

Brian Fontaine is the general manager of Dust Bowl Tulsa, and he has been part of the experienced team bringing the new McNellie's concept to life. He is one of the founding partners of Fassler Hall.

"About a year back, we took a look around Midtown and thought how we could take it up a notch, how we could bring it up to speed," he said, "and Oklahoma City is sadly lacking in bowling alleys.”

In all seriousness, or as serious as it gets with this group, it's all in the name of fun. And what better way to improve Midtown but adding a family-friendly activity to a district full of bars and restaurants?

For those who have visited Fassler Hall and Dust Bowl Lanes in Tulsa, you have some idea of what to expect, but the finished two-story entertainment venue at 421 NW 10th St. in OKC was built on a much grander scale. The 40,000 square-foot building was built from scratch, a first for J. Elliot Nelson's McNellie's Group. Bob Howard spearheaded the building’s development with Midtown Renaissance Group. Fitzsimmons Architects designed the building, working closely with Nelson to get the details right. Down to the padded bar top, Fitzsimmons and the architects listened. Dust Bowl is a time capsule with just enough updated garnishes and gadgetry to keep it fresh.

“They [Fitzsimmons Architects] got it down to exactly what we wanted, and we're so proud of it. They really blew us away," General Manager Dusty Freeman said.

The bowling alley serves finger food, and you can tell immediately that the food was chosen for its nostalgic air but also for the fact that it's easy to eat while you indulge your competitive nature. The food available downstairs is quickly made with fresh ingredients and is standard bowling alley fare like loaded tater tots and mini hot dogs perfect to scarf down between strikes.

The bar features a diverse selection, primarily in cans and with a lot of local beers represented. There are fun house cocktails like the Log Jam with coconut rum, cinnamon cream rum, chocolate liqueur and cream. There are plenty of the classics from the era, including a Brandy Alexander and a Grasshopper. In a hat tip to the best bowling movie of all time (The Big Lebowski) there is, of course, the White Russian. Upstairs is a completely different world. The inspiration for Fassler Hall was the beer halls that Nelson visited while abroad in Germany. They had a large, open space and community tables. The name is a nod to Elliot's great-great grandfather's occupation in Bavaria. The name for a cooper, or barrel-maker, in German is Fassler. You can reach Fassler Hall through a stairway inside in the bowling alley's central area or from the entrance on Park Place. The separate entrances for the spaces makes sense when you see how drastically different the two are.

Fassler Hall is surprisingly intimate for the cavernous space it inhabits. The warm lighting and large tables only serve to convey the sense of community — it's not uusual too see the long tables populated with several disparate groups. With the craft beer flowing in liter steins and those mingling moving through the tables, after a short time, it's one big party. And then there's the patio.

It’s a massive space with a roaring fire pit and a view of the OKC skyline. It takes up two sides of the building and is peppered with large tables and smaller, intimate seating areas, some around fires. There are plenty of clever details worked into the design of both buildings. One is a flowerbed that is made of rosemary plants. Not only are they hardy enough to survive the Oklahoma winter, but they are also a major component in many German sausages. It is the clever attention to detail that McNellie’s is known for.

Speaking of sausage, the Fassler Hall menu is simple. The kitchen creates some of the best house-made sausages in the city, along with handcrafted mustard and sauerkraut and pretzels that come straight from Germany.

The beer is an ever-rotating selection of craft beers that the McNellie’s group is proud to serve. Your choice of stein is the half-liter and the full liter. Hint: Patrons rarely order the tiny stein. And why would you? At Fassler Hall, the community vibe, free-flowing beer and outrageously good food make for a perfect evening to find a reason to celebrate.