Cover story: Factory Obscura’s Shift is a gateway into an immersive art world 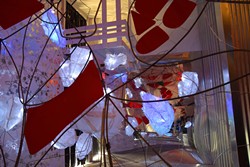 Similarly, there are no words or photographs that can fully capture Shift, the debut installation from the locally groundbreaking artist collective Factory Obscura.

When entering the installation, guests step inside a massive model skull, entering through the nose and exiting through the mouth. There is a “neural forest” to walk through, platforms to climb and secret tunnels to traverse. One room represents the concept of time itself. Even the bathroom has been transformed into an aquatic-feeling fishbowl.

It is hard to imagine a more ambitious local art project.

But, like the frustration one feels when trying to capture all the breathtaking beauty of a mountain vista on a smartphone camera, there is no way to fully understand Shift without experiencing it.

“There’s no language for it,” said artist and co-founder Tammy Greenman.

In addition to Karper and Greenman, Factory Obscura’s other founders include Laura and Laurent Massenat, Hugh Meade and Thomas Thompson.

Shift, which officially debuted Nov. 9, is open and free to the public noon-6 p.m. Thursdays-Sundays at Current Studio, 1218 N. Pennsylvania Ave. The installation will remain at the studio through Feb. 25.

Some have called Factory Obscura — and the world’s larger experiential art trend — the future of art and a potential new hope for artists endlessly fighting to make their craft a livable one. But in Greenman’s mind, the future has already arrived.

“I think this is in the moment; it’s happening now,” she said. “We’re in the midst of this new art movement.”

Laura Massenat, known by many as a co-owner of Midtown’s Elemental Coffee Roasters along with husband Laurent, said the collective was born out of a conversation with the Massenats’ long-time yoga instructor and friend Thompson. He noted to them that while there were many playgrounds and activities for children in the city, there were few comparable options that parents could enjoy.

Not long after that conversation, the Massenats visited City Museum in St. Louis, Missouri. City Museum describes itself as “an eclectic mixture of children’s playground, funhouse, surrealistic pavilion and architectural marvel made out of unique, found objects.” The delightfully bizarre 600,000 square-foot space opened in 1997 and was voted the No. 1 family attraction in the world on Trip.com.

Massenat’s group told City Museum they were interested in developing an adult playground in Oklahoma, and museum officials arranged a private tour of their facility. When they got back home to OKC, Massenat said their heads were spinning with ideas.

“We started talking to everyone we thought would be interested or would want to help or would have an idea or would know other people we needed to talk to,” she said.

Though the world has drastically changed in the last several years, the ways in which adults enjoy a wholesome day out still closely resemble the things their parents and grandparents did: bowling, movie theaters, miniature golf. Factory Obscura realizes we live in a time when the quality of the official group selfie at the place is as legitimately important as the outing itself.

“It also responds to a market that is looking for experience instead of just spending money on things,” Massenat said.

Even more than City Museum, Factory Obscura takes its influence from Meow Wolf, an art collective based in Santa Fe, New Mexico. The group started by organizing its own underground art installations and events. In March 2016, the collective opened its 20,000 square-foot art complex with funding from Game of Thrones creator George R.R. Martin.

The totally immersive experiential art environment includes a neon forest, a pseudo-house of magical realism and a unique concert venue that hosts real shows. More than 100 artists representing practically every visual medium are included in the Meow Wolf collective.

“[Factory Obscura] is exactly the Meow Wolf model, absolutely,” she said. “What permits them to help us get started is what inspires us to create our business that way and permits us to help the community going forward.”

Before Factory Obscura got its official name, group members referred to it using mysterious and ambiguous monikers like “the project” and “not recommended.”

Co-founder Hugh Meade said the Factory Obscura name is intended to represent a “new century” view of the creative process. Obscura is a Latin word meaning “hidden” or “in darkness.” Meade said some might be familiar with the term camera obscura, the phenomenon in which an image on one side of a screen is projected onto the other through a tiny opening, like with a pinhole camera.

“It also turns the image upside down,” he said. “So, we are turning the idea of the factory on its head.”

To counter art made with a factory mindset — works produced under the idea that they will eventually be purchased by a buyer and added to that buyer’s existing collection of things — the group hopes to make being in the midst of that art its main selling point. Achieving that takes grand vision and aspiration, which, in turn, demands a lot of collaboration.

The team did not begin physically installing Shift until mid-August, working tirelessly for the next three months to complete it. It took each of their perspectives and sets of expertise to make the installation what it is today.

Though some of the artists are multimedia by trade, others were working in three-dimensional space for the first time. Greenman said if any of the Factory Obscura artists faced a challenge working in the format, the team was there to help steer them in the right direction.

“We are cooperative,” she said, “so we all worked together to figure out, ‘How can you take something that is two-dimensional and — almost like pop-up art — how do you present it in a three-dimensional way?’”

Of course, the Shift installation remains free through the rest of its run at Current Studio. Factory Obscura won’t be able to fully realize its admission-based artist profitability model until it achieves its goal of securing a permanent home.

The collective is scouting potential landing places for its own art complex somewhere in the city.

“Wherever we land, we see the potential for Factory Obscura to be a huge draw for people to come to wherever we are,” said Karper, who is also co-founder of Current Studio. “That’ll have a big impact on the surrounding area, so we want to be really strategic about that.”

While the group is excited about what the future might hold for Factory Obscura and purveyors of experiential art, the founders make clear that their intention is not to diminish or compete against other artists and art forms.

Greenman said no one has to choose between enjoying only experiential art and all the other traditional art movements and mediums that came before it. In fact, Factory Obscura acts as a connecting bridge between all visual styles.

By combining the energy of previously scattered and solo-working art voices, Greenman said the collective’s potential is staggering to think about.

“You used to not be able to make money off just an experience; people had to take something away,” she said. “But now we’re opening that up to say, ‘What could that look like?’”

Print headline: Open portal, Factory Obscura’s Shift is a gateway into an immersive art world and the first step in an attempt at improving prospects for career artists.