Vanilla Noir earned a 36 out of 38 from three panelists and takes the top spot in our review. It looks like what you’d expect from a fall stout: dark brown that isn’t cloudy and has good lacing around the glass. The flavor is smooth and creamy with bourbon characteristics and is low on the carbonation. The whiskey flavor is present without overpowering the smooth stout elements. “It’s an excellent after-dinner beer that could replace dessert, but I’d love to try it with ice cream,” said one panelist. It shouldn’t comes as a surprise that Prairie Artisan Ales tops our list. Deadspin’s Will Gordon said Prairie Artisan Ales’ Prairie Hop is the best beer in the country. The brewery’s imperial stout is a welcome addition to your fridge this fall.

A beer that is more associated with spring and summer rose nearly to the top of our fall brew list thanks to a commitment to style. Vanessa House recently made the decision to offer the beer year-round, and it has paid off. A fruity aroma reminiscent of pineapple and grapefruit is paired with a flavor that delicately balances the floral notes of hops and the malty bitterness that is “most enjoyable on the taste buds,” one panelist said. It earned a perfect 38 out of 38 from another panelist.

The Hibernation Ale threads the needle as a barrel-aged brew that is not too boozy. It has a whiskey barrel aroma and a dark amber color. The whiskey flavor is present but finishes smoothly. “Your palate pays attention but doesn’t linger,” said one panelist who recommends it as a standalone beer or perfect with a dessert. “It’s a very nice beer with a good bourbon presence,” said another panelist.

The local Oklahoma City beer earned points for being a delicate stout, not too overpowering. It has a roasted and chocolate aroma without clouding your taste buds. It pours a dark brown, but its flavor is lightly roasted malt. While one panelist judged the milk stout as thin for the style, another said the flavor would be perfect for parties and entertaining, which is not always the case with a stout. One panelist gave it a 36 out of 38.

The highest-ranking traditional märzen in our ranking earned its way into the top five with a malt aroma that continued into a mild malt flavor and a dry finish with only light carbonation. “Good attention to its starting taste,” one panelist said. The beer earned an outstanding grade from three panelists, but one ranked it lower for a lingering bitterness in its aftertaste.

The aroma coming from the Hotbox Coffee Porter is strong enough to make you think that it could be a cold brew coffee, but the malty porter flavor comes together for an agreeable blend during the taste. A hint of sweet caramel knocked it down a notch for one panelist, who also noted that it is too thin for style, but it earned high marks all around. “If you like coffee and beer, then try this one. It’s highly enjoyable,” said another panelist.

Prairie Artisan Ales was trying to take the imperial stout from the fall and winter and make it an all-season beer with the addition of coconut and vanilla. At 13 percent, it’s the highest ABV in the review, and the aroma is boozy to match. It pours a dark brown, and the coconut comes through in the flavor, along with coffee, bourbon and molasses. “I really enjoyed this one. It’s a great combination of flavor and mouthfeel,” said one panelist. 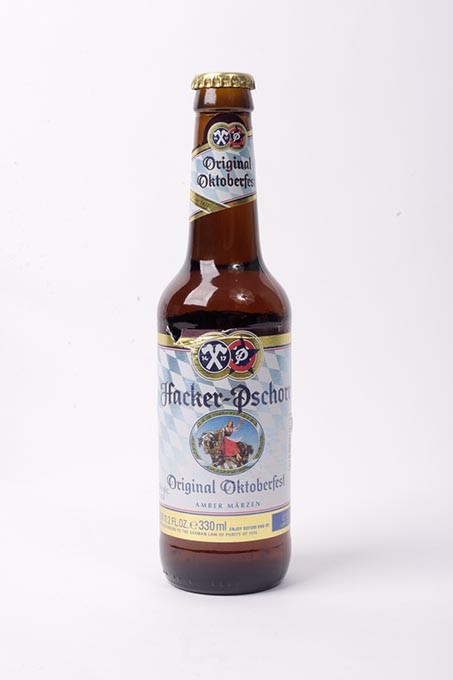 Hacker-Pschorr’s recipe for its beer dates back to the dark ages and is the creation of a merger of two of Germany’s oldest breweries. With the history behind the beer, it’s easy to see why it is the highest-ranking German brewed beer by the panel. It pours with a pleasing malty aroma into a caramel color. The flavor is a balance between a sweet start, malty middle and slightly bitter finish. “It’s a very good example of this style,” said one panelist.

Gold in color and very clear, the Sei Barili Vol. II is one of the highest-ranking beers for its appearance. This local iteration has a huge floral aroma and spicy undertones. It does not finish with a strong aftertaste like many other IPAs.

The pumpkin spice notes are present in the aroma but not overwhelming with the flavor. As a stout, its light brown color is highlighted by mahogany and flavor is rich and creamy. One reviewer said it would be great next to a roaring fall fire. “It’s easy drinking with slight spice notes,” said another. The biggest criticism of the beer was that it lacked “stout authority.” 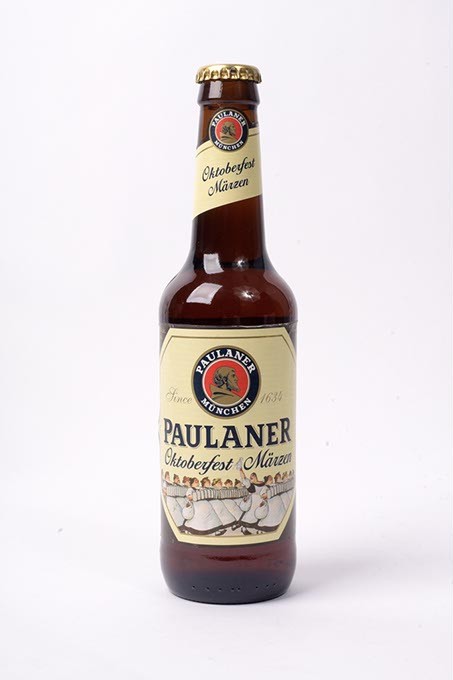 Hailing from Oktoberfest’s Motherland, Paulaner’s Oktoberfest Märzen is the most accurate representation of what the more than 6 million people who visit the city for Oktoberfest will drink. The malty notes start with the aroma and continue into the flavor, which ends with a smooth finish. The Paulaner outranked its German counterpart (Wiesn) despite one reviewer noting the bottle might have influenced the flavor through light exposure.

In the case of Warsteiner’s Oktoberfest, the difference between American and German Oktoberfest can be noticed on the pour. It’s a light gold compared to the darker ambers of American beers, and it’s more malty than it is sweet. American Oktoberfest beers have adapted to be sweeter, but the Warsteiner is slightly bitter, which one panelist noted was a good representation of style.

If you are one of the people who marks the proverbial calendar until the return of all things pumpkin spice flavor, then this is the beer for you. One panelist said it was like drinking a pumpkin pie. Cinnamon seemed to be the most dominate flavor between panelists, which earned high marks from one and weariness from others. “I like this beer, but it seems like the brewer went all-in on the spices,” said one panelist.

This local beer was the brainchild of Anthem president Patrick Lively and friend Patrick Riley, who runs The Lost Ogle blog. Anthem uses a Vienna style of hops rather than the traditional märzen style, and the results are quite satisfactory. It was praised for its slight malty aroma and balance provided from heavy carbonation, which is to style, and a touch of vanilla. 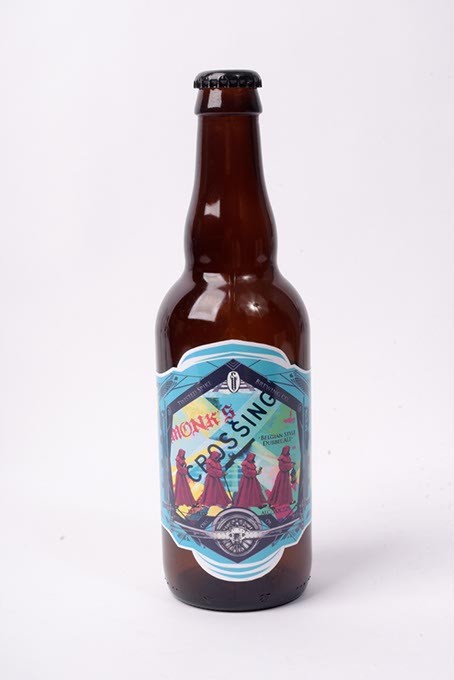 In warmer seasons, this beer might’ve ranked higher on the list. It gives off an aroma two panelists said is reminiscent of stonefruit. Its appearance is cloudy and amber while its taste is sweet with a hint of licorice. The fruit aroma combined with the sweet flavor knocked it down for a fall brew, but it’s still plenty drinkable.

This entry from COOP makes its presence known immediately with its pungent notes of wheat that are both sweet and vinegary. The sour notes take hold when the honey ale hits your tongue, and then the slight fizzle of carbonation is soon to follow. Even though a few on the panel do not care for sour beer, they overlooked personal taste to see that it is a good representation of style that is “quite complex.”

Blue Moon’s entry into the realm of all things pumpkin-spiced is an exercise in restraint compared to the Rahr & Sons’ Pumpkin Ale. The notes of nutmeg and ginger were divisive among panelists, some calling it artificial and another describing it as “enticing.” The beer earned praise for its clear body, but it missed its opportunity by not fully embracing pumpkin spice. One panelist said it would’ve scored higher if it were sweeter.

Try as you might, have you never been able to get into IPAs because they’re too hoppy? The slight fruit aroma and balance of bitter and booziness from the rye in the Business as Usual gave it a smoothness that even non-IPA fans will enjoy. It pours light and clear and does not have an overpowering floral aroma.

Stonecloud Brewing’s Turtlehead Coffee lives up to its imperial stout name with 11 percent alcohol by volume, the second highest content in our review. The booziness turned out to be divisive; two reviewers gave the brew an outstanding score, and another rated it only as “very good,” which knocked it down. The flavor is like roasted oak but “kind of one-dimensional, boozy,” one reviewer wrote.

The Oktoberfest brewed right here in OKC beat out versions brewed by big national craft brewers Sierra Nevada and Samuel Adams. The beer’s flavor, appearance and overall impression overcame an odd aroma, which three panelists said had a trace of sulfur.  The lager earned praise for its creamy mouthfeel, but the slightly bitter aftertaste was seen as a good balance by some panelists and off-putting by others.

Read a breakdown of beer types and our scoring system here!

Learn about our panelists here!