As dinner winds down, it’s clear there’s still a lot to say. One member offers her home for another meeting and a chance to continue and go deeper into the discussion.

Past the booths and bustling 360-degree bar at The Barrel, 4308 N. Western Ave., away from the laughter and music of the main room, 11 people sit around a square, black table in a small, private dining room. They prepare to tell the truth.

The guests are mostly strangers, but they have at least one thing in common: They’re tired of all the bad news.

“There had been several speaker series, panels and talks on race in our city,” said Taylor Doe. “After these talks, the question people kept asking was, ‘What’s next? What can I do?’”

Founded by Taylor Doe and married couple Rodney and Cresha Redus, DinnerTableOKC is an initiative to bring together people of different ethnic backgrounds over dinner to have sometimes-uncomfortable conversations about race in society.

Doe is white. The Reduses are black. Despite differing backgrounds, ages and ethnicities, they found one another and became friends. In many ways, that’s the goal of DinnerTableOKC: Bring together people who might not otherwise meet. The best way to open a dialogue, the way most people feel comfortable, is to come together over a meal and share their thoughts. 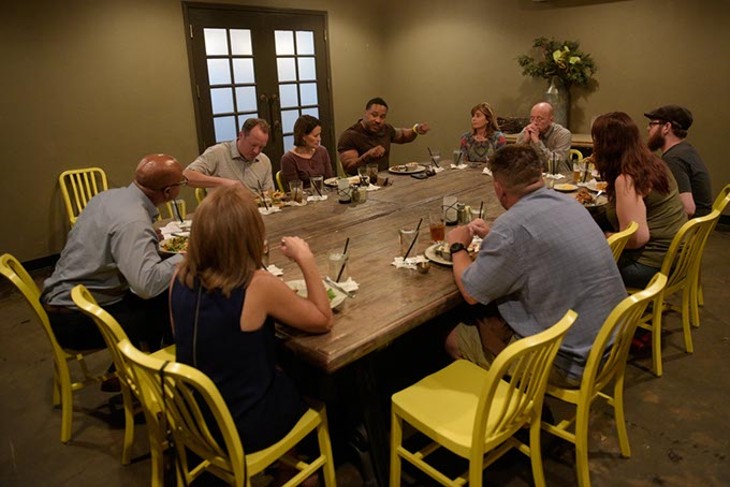 Vivian Woodward has a lot to share. The niece of famed civil rights activist Clara Luper, she sees a world that is sometimes brighter and sometimes scarier than the one her aunt fought to change.

Luper led nonviolent sit-ins at lunch counters in Oklahoma City in 1958, protesting the policies that segregated the races. But that segregation still occurs today, Woodward said, just behind the scenes.

She believes it will take more than talk to change things, but that’s where it starts.

“Unless you talk and make changes, you’ll never move forward,” she said.

“I love going to those, because you get a chance to meet people, get information and find understanding,” she said. “But first, you have to have the desire.”

She said people are often scared to have discussions like the ones that happen at DinnerTableOKC. It is hard to be confronted with unpleasant truths, but it must be done. She also thinks the benefits and the friendships that can be formed are worth the discomfort. 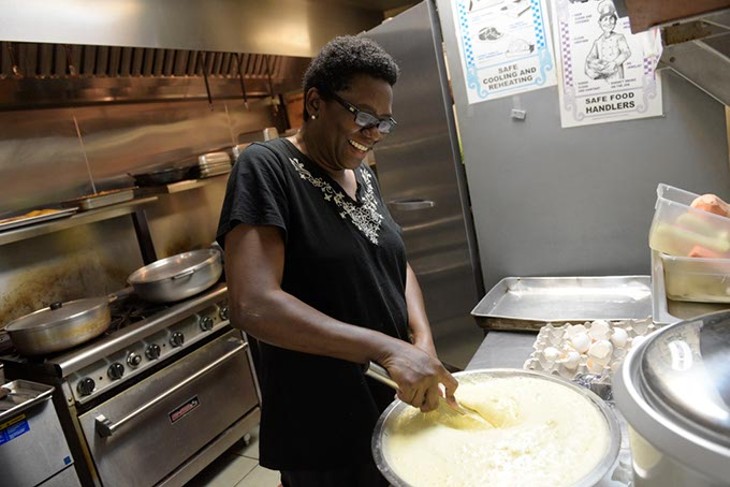 After introductions, the conversation begins with questions from the facilitators. At first, there are icebreakers.

“Why did you come today?”

Some are there to share their experiences. Some recognize a lack of understanding or a latent prejudice and seek to address it.

It was Jane Woods’ second time as a dinner guest. After reading about the idea, she immediately signed up.

“I think there was more of an impact with the first one,” she said. “It was a more informal setting. There’s something about sitting around in a casual environment where you can discuss things a little more readily.”

Woods said she wishes the dinners happened weekly in every city and town in the state because they would make such a difference.

She started making her own changes in 1981, when she began welcoming guests from around the globe into her home. The experience broadened her mind to other cultures, but what she discovered at DinnerTableOKC is that there is still a lot to learn about the way of life here at home.

“When the ladies were talking about the progress that has been made and they said, ‘At least doors are not slammed in our faces anymore,’ I was shocked,” Woods said.

At her first dinner, she said one of the guests, a black man, told her he was fearful to walk around in Edmond. It was a perspective she never heard before. If this successful, accomplished man was afraid to walk down the streets of the city she lives in because of the color of his skin, then things are worse than she imagined. 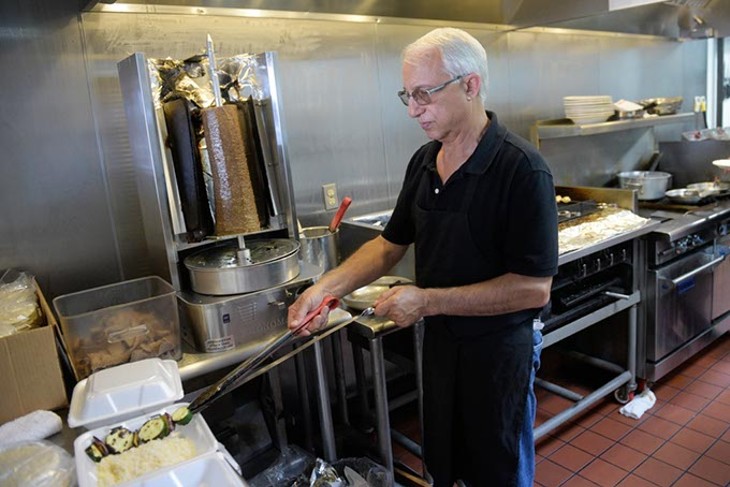 Doe said he thinks the lens through which people view the world changes as they create relationships with others who are not like them. Suddenly, “they” become real people.

Since March 2015, DinnerTableOKC has hosted about 25 dinners, and Doe said he finishes each one heartened by the openness, honesty and caring shown by his dining companions.

“We’ve had amazing responses from people who have attended previous dinners,” he said.

Conversations aren’t always easy, but they’re made less difficult because people come to teach and learn.

At The Barrel, the discussions twist and turn through the prejudices held by some of the guests’ parents and how Americans are viewed overseas.

Woodward spoke of the impact of slavery and how it mirrors the way young black men are sent to prison.

“There’s no parity,” she said.

During a conversation the next day, Woodward said the imprisonment of young black men reflects the first steps of slavery.

“Remember when there was slavery, the first thing they did was take the men out of the family. They took the men away from the wife and children. Even now, that is what happens,” she said. “They are separating black men from the families.”

That leaves black children without a model to follow.

“You need somebody to guide you from a child,” she said.

That’s one reason she works with a group that tutors and seeks mentors for young men so they have something to reach for.

“If you’re not introduced to something, you will not have a vision,” she said.

The same is true of DinnerTableOKC, where Doe hopes introductions to people and to their issues and feelings will build cross-cultural relationships.

Sharon McMillan started her restaurant 11 years ago with a simple dream to create a place where people could eat, relax and feel at home.

The crowds inside Carican Flavors, 2701 N. Martin Luther King Ave., are proof of her success.

Originally from Trinidad, McMillan speaks with a lilt that makes every word sound musical.

It wasn’t easy getting the business up and running, she said.

At first, many people who came in were worried the flavors would be too spicy or too intense.

“They are a little more difficult to convince, but it’s all the same things you normally eat, just different flavors,” she said. “In the beginning, we did a lot of sampling. Once folks get a taste, they say, ‘Oh, okay!’”

Teaching through tasting netted Carican Flavors a large local following, though most diners are not from the Caribbean.

“Most of my folks are from right here in the city,” McMillan said.

Her customer base is a tour of the world via Oklahoma City. Over time, she has learned how the food she serves is close to dishes served in Asia, Africa and South America.

“We get quite a mix of races and cultures. There are a lot of military folks stationed here in town who come to get enough food for days at a time,” McMillan said. “I see all kinds of people, to tell you the truth. It doesn’t really matter. Rich or poor, I want them to feel like this is home.”

For the last nine years, the pair have owned and run The Mediterranean Grill, 7868 S. Western Ave., but Foroozan said their dreams of owning a restaurant together began more than 30 years ago.

Once it opened, the challenge they faced was introducing people from the area to the cuisine.

Aside from the usual gyro and shish kebabs, Foroozan said the mix of Persian and Turkish dishes were unknown to many customers.

The key for success was patience and service. Diners who came back because the owners were friendly and willing to talk began trying other dishes.

Now, Foroozan said, their customers are mostly Americans who enjoy traveling the world by taste.

Joyce Jackson has done her fair share of traveling. At DinnerTableOKC, she talked about a childhood spent in Oklahoma and Oakland, California — a unique combination that allowed her to sit-in with Clara Luper and witness the origins of the Black Panther Party.

So much of what came before is lost on people today, she said. They see militancy in the Black Panthers, but she remembers when they began as a community service organization.

As a retired Oklahoma Department of Corrections worker, Jackson said she has seen the prison issue from both sides and she understands how fear of other ethnicities leads to violence and injustice.

That’s one reason she and Woodward work on the Dr. Martin Luther King Jr. Prayer Breakfast in Midwest City; it brings together so many people from so many backgrounds and helps dispel the ideas that separate us.

When they were younger, it was understood that it wasn’t safe for a black person to be out after dark in Midwest City.

As dinner winds down, it’s clear there’s still a lot to say. One member offers her home for another meeting and a chance to continue and go deeper into the discussion.

And when those bonds are built, there’s no more need for a facilitator, which means another group of strangers will get to sit together soon and tell the truth.