We rustled up this country-fried top-10 selection of the couple’s most beloved hits as the playlist to your Oklahoma City metro adventure. 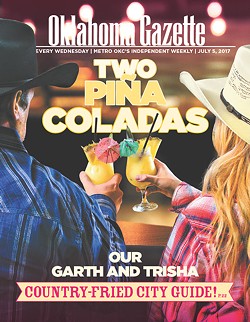 When tickets for the Tulsa-born and Yukon-raised country music megastar’s tour stops with equally talented wife and songstress Trisha Yearwood went on sale June 2, Garth Brooks set an Oklahoma City sales record — more than 50,000 sold in less than one hour.

It is no surprise that these tickets found an army of eager buyers. Brooks’ last gig in OKC was 20 years ago. He is also the best-selling solo recording artist in U.S. history and second globally to The Beatles. (Coincidentally, Paul McCartney performs July 17 at the ’Peake, just two nights after Brooks’ local shows conclude.)

Let’s face it; these four Brooks and Yearwood concerts are a very big deal. Over 50,000 people are descending on our great city. For comparison, average Oklahoma City Thunder home-game attendance is about 18,300. Brooks is a showman — a bona fide musical entertainer — and it only makes sense that fans would spend a little time before and after the concerts to have a little fun and experience the city. Heck, make a weekend out of it; there’s still time to plan. Even if you weren’t one of the lucky 50,000 people to get a ticket, you can party in their honor anytime! Let Oklahoma Gazette’s own “Garth” and “Trisha” be your guides.

We rustled up this country-fried top-10 selection of the couple’s most beloved hits as the playlist to your Oklahoma City metro adventure.

Album: Sevens (hear a concert version on Double Live) Party trivia: This single spent 28 weeks on Billboard’s Hot Country Songs chart after its March 1998 release. Visit: Rockford Cocktail Den Patrons won’t find an ocean-side beach at Rockford Cocktail Den. But while sipping the ’60s-chic bar’s luxurious Piña Colada, it is easy to feel like you’re taking a vacation from your troubles. Rockford has a veritable ocean of decadent cocktails to try, including its Harvey Wallbanger, The Hampton and Kinky Pinky. If you do get a hankerin’ to hit a beach, downtown Oklahoma City has one of those, too. Check out Bricktown Beach, open daily at Chickasaw Bricktown Ballpark’s Third Base Plaza, 2 S. Mickey Mantle Drive. 317 NW 23rd St. rockfordokc.com 405-601-4248

Album: In Pieces Party trivia: The tune was originally titled “American Redneck Bar Association.” Visit: Red Rooster Bar and Grill Fans seeking a proverbial meeting of Brooks’ fraternal honky-tonk club can still find one at Paseo Art District’s Red Rooster Bar and Grill. The smoky, beer-only joint is the perfect place to shoot some pool with a buddy while shooting the — well, you know. Live music is the key ingredient to any AHTBA assembly, and Red Rooster hosts plenty of it, including psychedelic gypsy bluegrass jam band and venue favorite The Dirty Little Betty’s. 3100 N. Walker Ave. redroosterokc.com 405-525-7631

“Two of a Kind, Workin’ on a Full House,” Garth Brooks

Album: No Fences Party trivia: This cover tune was originally recorded by Dennis Robbins in 1987. Brooks’ single became his fifth consecutive No. 1 on Billboard’s Hot Country Songs chart. Visit: Remington Park Racing & Casino Attention, all you lucky ladies and wild-card men! There’s plenty to do until live horse racing returns to Remington Park Aug. 25. The racetrack’s casino is now open 24 hours a day. Play the slots, grab a drink at Old No. 7 Bar and eat at Jackpot Pizza and Bricktown Brewery. If you hunger for more live music, watch bands perform 9 p.m. every Friday and Saturday on Old No. 7 Bar’s stage. 1 Remington Place remingtonpark.com 405-424-1000

Album: Garth Brooks Visit: Cowboys OKC Grab that special someone and hit Cowboys OKC’s dance floor. Get into the Wild West spirit 7:30 p.m.-2 a.m. Fridays and Saturdays when the venue hosts live bull riding. Whether you hop on a bull or just two-step across the floor, you won’t want to miss “The Dance.” 2301 S. Meridian Ave. cowboysokc.com 405-686-1191 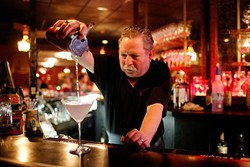 Album: No Fences Party trivia: It earned Brooks single of the year honors from the Academy of Country Music and Country Music Association. Visit: Junior’s There are some real low-down folks at Junior’s — like, literally. The swanky, red-walled hideaway found in the basement of the west Oil Center building on Northwest Expressway has served beer, whiskey and martinis for decades. The ultimate pick-me-up is Junior’s Brandy Ice, a mixture of brandy, cacao, ice cream and nutmeg that is essentially the milkshake of our dreams. 2601 Northwest Expressway juniorsokc.com 405-848-5597

Album: Garth Brooks Visit: Beginners Tarot Class “If tomorrow never comes,” Brooks famously ponders, “will she know how much I loved her?” Well, one way to find out is to ask them. Spirit Fair instructor and guide Cyndy uses her more than 20 years of experience to host a beginner tarot card reading class 1-5 p.m. July 15-16 at artist Tammy Conover’s studio. Registration is $100. Students should bring their own pen, paper and Rider Waite tarot card deck. Reserve your spot by emailing spiritcyndy@gmail.com. 9106 S. Walker Ave. spiritfair.com 405-520-6990 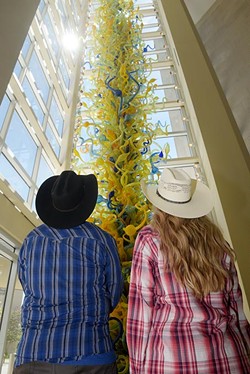 Album: (Songbook) A Collection of Hits Party trivia: The collaboration earned the couple a 1997 Grammy Award. Visit: Oklahoma City Museum of Art The Brooks and Yearwood duet beautifully captures the struggle living up to the idealistic perceptions painted by a significant other. Of course, it is a lot easier to find the beauty in actual paintings, which is why you should visit Oklahoma City Museum of Art. Take note of others’ perceptions in the museum’s fabulous new exhibit Kehinde Wiley: A New Republic or its permanent collection. 415 Couch Drive okcmoa.com 405-236-3100 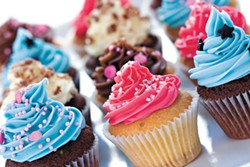 Album: Ropin’ the Wind Party trivia: The song was written and recorded by Billy Joel and appeared on Joel’s album Storm Front. Visit: Buttersweet Cupcakes While visiting the town in which Brooks was raised, there’s no shame in indulging a bit. After stopping by his childhood home, 408 Yukon Ave., and cruising down Garth Brooks Blvd., cut loose at Buttersweet Cupcakes. Classic flavors including Vanilla Thrilla and Chocolate Fudge will entice you, as will cake parfaits and from-scratch brownies. 817 S. Mustang Road, Yukon buttersweetcupcakes.com 405-265-4994 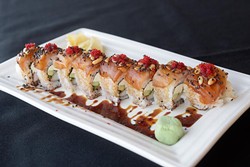 Album: No Fences Visit: Sushi Neko One of Oklahoma City’s best-loved sushi bars, Sushi Neko is ideal for a romantic dinner or a rollicking meal with friends. There’s a sushi virgin sampler for first-timers and a cooked menu that also features steak and chicken. Brooks and Yearwood superfans should consider ordering a Thunder Roll made with crab, chili sauce, cucumber, albacore tuna and habanero masago. 4318 N. Western Ave. sushineko.com 405-528-8862 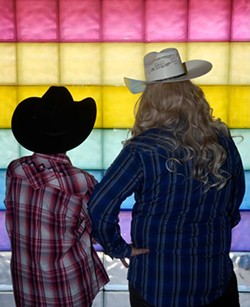