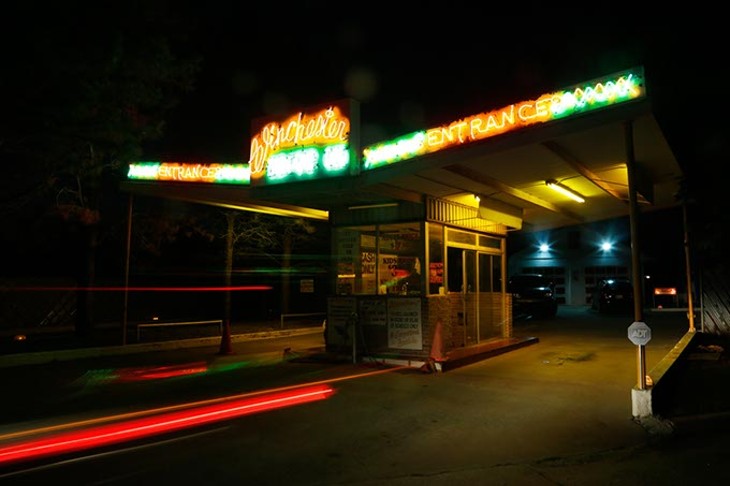 Lindy Shanbour loves people, his employees and the movie business.

He gets to interact with all three every night through the summer as he runs Winchester Drive-In, 6930 S. Western Ave., a busy place in the midst of celebrating its 47th anniversary.

Shanbour, who owns the Winchester, still cannot imagine dropping out of this type of entertainment business, even after 47 years.

“Once you get in the entertainment business, you can’t get it out of your blood,” he said. “I just love it.”

He uses his experience to make sure that the Winchester remains a favorite for locals and out-of-town visitors. He said he wouldn’t trade it for anything, even big offers from real estate developers.

As Oklahoma City, Edmond, Midwest City and Norman offer even more outdoor movie nights in various parks in the summer months, some write off outdoor, drive-in theaters as relics of a lost history.

But the Winchester is still a popular venue that shows first-run movies.

The drive-in fills to capacity often enough that experienced customers get there two hours before the first film starts to make sure they get in and get the spot they like. 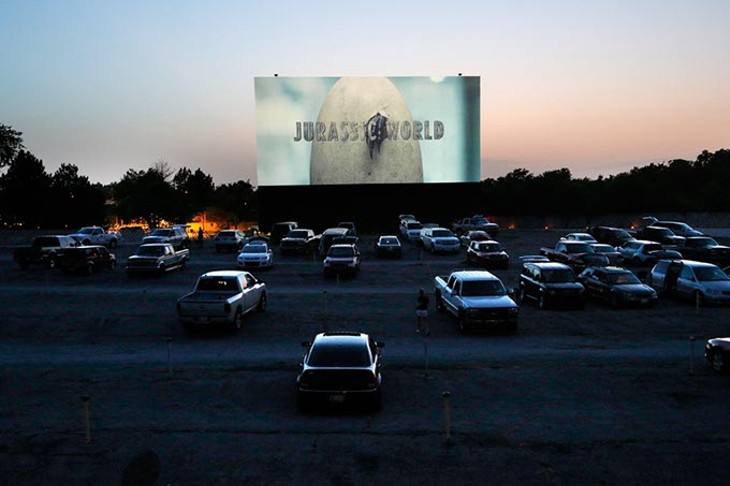 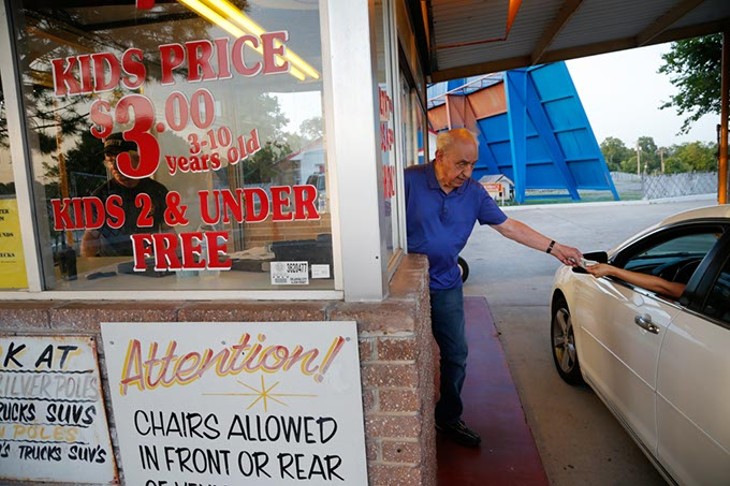 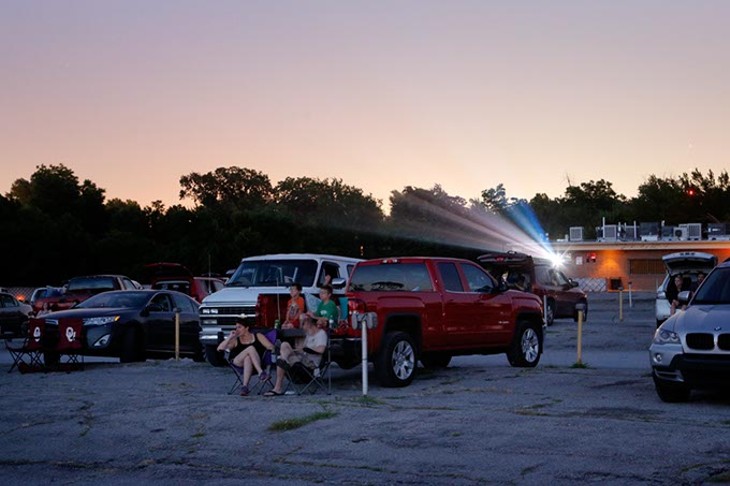 Loyal customers, loyal employees and a loyal owner create a cinema experience unique to the Winchester.

That circle of commitment begins with customers who keep coming back and filling up the Winchester’s parking spaces each night.

People look for Chester as they approach the location just north of Interstate 240. Chester is the cowboy on the Shanbours’ signature, two-story neon sign that has welcomed patrons since the drive-in opened.

Just past the sign, moviegoers see another familiar face. Each night, Shanbour says hello to guests as he sells tickets.

They are greeted with a particular courtesy Shanbour learned when he first started working for his older brother, Farris, who started him out tearing tickets at age 14 at one of the many theaters in Oklahoma Entertainment, the family franchise.

Unlike staying in his office, working the ticket booth gives Shanbour the customer contact that allows him to know what they want and like. The exits are close to the booth, so he hears comments as people leave, too.

“I like it out here. I enjoy it,” he said, referring to his preference to spend evenings at the ticket booth. “They’ll drive up there and say, ‘Thank you for keeping this open. Keep up the good work.’”

Shanbour’s allegiance to his customers was once again revealed after a tornado extensively damaged the building that houses the concession stand, office and projection room in 2013. Shanbour converted to a digital projection system just 11 days before the storm, and the massive amounts of rain that poured into the building ruined the new projector.

He could have taken the insurance money, sold the property to a real estate developer and walked away.

Instead, he replaced the projector, rebuilt the concession stand and repaired Chester, and the Winchester opened again that October.

Shanbour stays at the ticket booth, but he remains in touch with staff at all times via two-way radios. He is a hands-on owner. 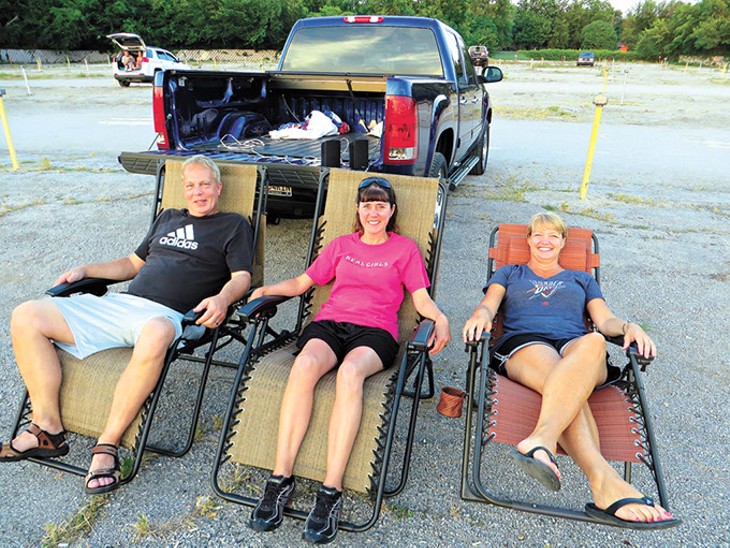 The loyalty of the venue’s repeat customers becomes obvious when they start talking about the Winchester.

Husband and wife Lloyd and Charlotte Kutch have been going there for years.

Lloyd Kutch and his sister, Brenda Bischoff, first visited when they were children.

“I was here the very first year that it opened. Brenda came, too,” Kutch said. “She probably doesn’t remember because she was a baby.”

They usually visit on Sunday nights because attendance peaks on Fridays and Saturdays and they enjoy the smaller crowds.

“One time on a Saturday night, we were going to meet up with a friend, and it was full, so he had to park outside and walk in to meet us,” Lloyd said.

Tom and Mary Ballas also are regulars and said their first visit was in 1975.

The couple’s adult daughter, Tiffany Mateas, now lives in California but visits the Winchester with her folks when she’s in town. It’s a tradition.

“They started bringing me out here when I was a little kid,” Mateas said. “It’s the first place I saw the movie Jaws.”

“When my nephews, their grandchildren, come to town, my parents bring them out here,” Mateas said. “They love it.”

Tony Franklin and Leslie Rogers sat in lawn chairs in the back of their pickup as their children Derrek and Gregory rested on a blanket in front of them.

The boys like the Winchester better than indoor theaters. The youngest, Gregory, said that it’s “because [he] can see a bigger screen.” He also said that if he wanted to, he could “get up and play and be a wiggle worm.” 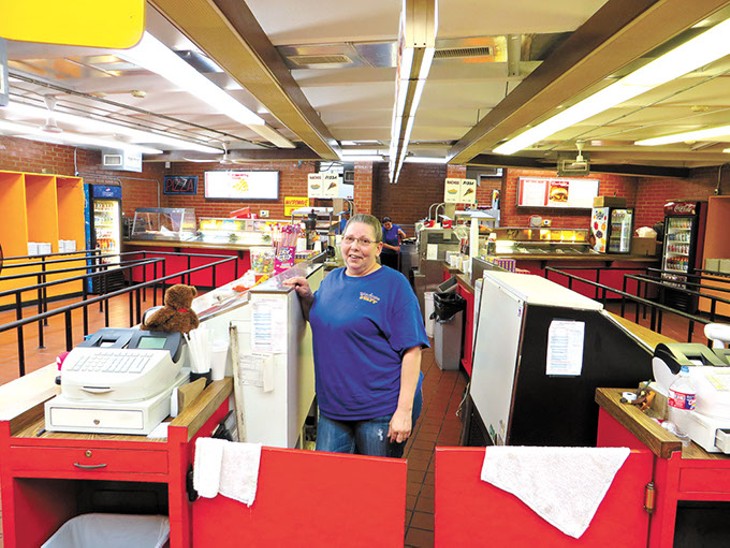 Bob Deupree, Shanbour’s trusted manager, has worked for him for 25 years.

Two members of the security team, well into their adult years, each have been employed with Shanbour since they were 14.

The devotion that the owner and staff give back to steadfast customers and even first-timers produces a safe, enjoyable environment for viewers, Shanbour said.

Gliding through the lot in golf carts each night, the security team helps big trucks park in areas that don’t obstruct views for people in cars. They answer questions and remind guests of visitor guidelines that were given out as they arrived.

The etiquette rules help minimize movie interference while maintaining the venue’s reputation of providing a relaxed and friendly outdoor experience. 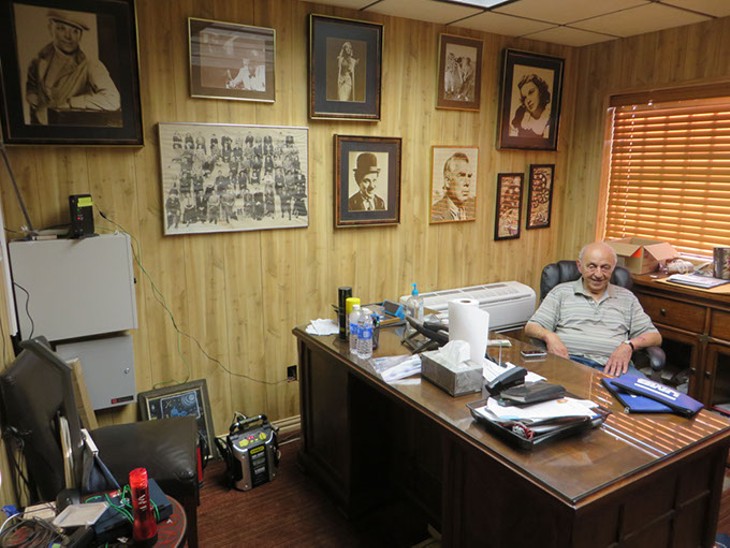 Some former employees come back simply because they enjoy the environment and also pitch in to help when they see a need.

Bob Eufinger is well past his days of working night after night in this business, but he can’t stay away, either. Occasionally, he visits before showtime because he likes the excitement of the preparation.

“I helped him [Shanbour] open it. I teamed up with his brother,” Eufinger said. “I started as an usher at the Tower Theatre in 1951. See, I love people. I like crowds.”

He expressed a sentiment also shared by many employees: “The customers out here are fantastic. It’s the loyalty.”

Similarly, Rodney Myers said he helped open the drive-in when he was 16. Even though he has gone on to college and another profession, he still loves helping out in the kitchen and concession stand because, like Eufinger, he loves the place and the way Shanbour runs it. 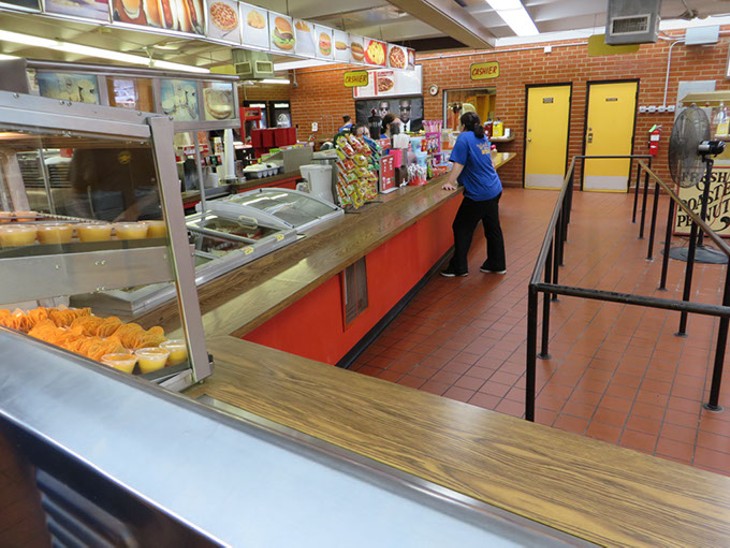 People go to the Winchester to eat, too. It’s a big part of the moviegoing experience at any theater, but it’s bigger there because frequent concession visits don’t require guests to obstruct or interrupt viewing or wriggle awkwardly down isles filled with seated guests like indoor theaters often do.

The concession area is a big room with two lines to accommodate the rush between the first and second movie showings each night.

Shanbour strongly believes that customers deserve quality food and drinks no matter what they buy from the concession stand. His hot dogs come exclusively from the local Schwan’s food company because it consistently provides a superb product.

He and his cook take pride in their franks, hamburgers, chicken baskets and pizzas, which are cooked on-site in a full kitchen rather than in a microwave.

The popcorn machine is a workhorse that has provided dependable service for longer than they can remember because they believe it does a better job than newer models.

There is hot food, candy, peanuts, ice cream and soft drinks, but customers can also buy hats and t-shirts emblazoned with the iconic Winchester sign. 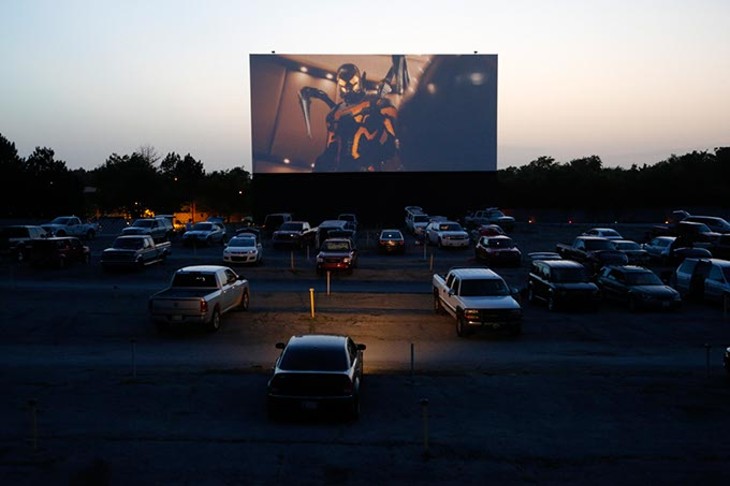 Winchester is no relic. Shanbour frequently upgrades technology so it produces the best possible viewing experience.

Instead of the old-school mono, wire-tethered speakers that must be manually placed inside a car, Shanbour broadcasts an FM signal that guests listen to through their car or portable stereo.

When he invested in the digital projector in 2013, people noticed quickly.

“There is a huge difference,” Lloyd Kutch said. “Used to be, if there were night scenes in the movie, you really couldn’t see them very well. They weren’t very clear.”

“This one doesn’t wash out at all,” she said.

Projectionist Chad Meyer has worked there for four years.

He explained his love for the digital projector that Shanbour was so determined to bring online two years ago. It is the same type of projector used in IMAX theaters.

The venue needs that much projector power in order to overcome obstacles that indoor theaters don’t have. For example, movies at the Winchester are projected longer distances to bigger screens than indoor films. Also, ambient light bleeds in from surrounding businesses, meaning images from a less-powerful machine can be hazy and washed-out. The Winchester’s projector, however, overcomes even bright daylight.

Myers explained that digital projectors don’t use film. Now, movies come to him on hard drives that are inserted into a server that controls the projector.

To inhibit criminals from intercepting hard drives in transit and bootlegging them, movie companies encrypt them and then send Myers the necessary codes to unlock them.

There are many elements to having a successful drive-in that is safe and attractive and provides quality concessions and innovative technology. If any of the processes fail or are missing, customer experiences are not as good, Shanbour said.

That said, the most important element that allows the Winchester to run as well as it does is loyalty.

The circle of loyalty is complete. 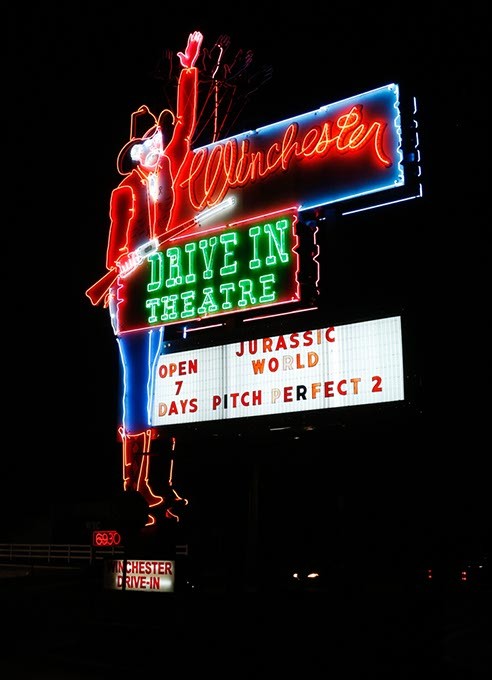