“What we always do really well with our exhibitions — and we’ve already gotten feedback that this is the case again with Matisse — is that our exhibitions always look really good,” Whittington said. 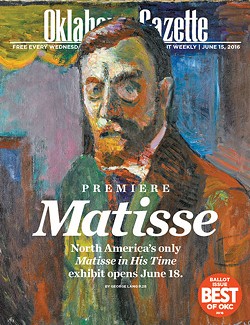 With Matisse in His Time: Masterworks of Modernism from the Centre Pompidou, Paris, a limit ed exhibition capturing the character and dynamics of Matisse’s artistic community that makes its only North American stop in Oklahoma City, Matisse could have the same effect on Oklahoma City Museum of Art (OKCMOA).

“It takes this museum to the next level,” said Michael Anderson, director of curatorial affairs at OKCMOA. “This is not the sort of scale or scope of exhibition that people are used to seeing at this museum or in this city. … This will make it possible to do more exhibitions like this in the future.”

In some ways, the arrival of Matisse in His Time, showing Saturday-Sept. 18, is the culmination point for a museum with a growing reputation as a favorable fine art venue. The open-concept gallery design and large spaces lend themselves to large, ambitious exhibitions and paved the way for Matisse’s arrival. 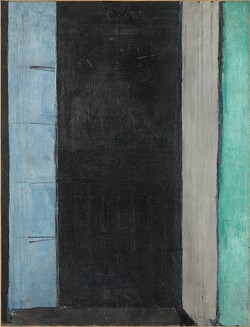 After multiple talks between President and CEO E. Michael Whittington and staff at Centre Pompidou, which houses the second-largest collection of modern art in the world, and visits from MondoMostre and Centre Pompidou curatorial teams, OKCMOA became one of only three museums exhibiting Matisse in His Time. After the Art Gallery of Ontario in Toronto, Canada, passed on the exhibit due to a change in leadership, Oklahoma City became the sole stop for the exhibition on the continent.

Anderson said that OKCMOA received the contract based on the footprint of its galleries and its growing reputation for first-level presentation.

The requirements of the exhibition perfectly meshed with the gallery design on OKCMOA’s second floor, making for an ideal situation.

“We have a flexible space,” Anderson said. “What we did for this exhibition that’s unusual is we installed it on the entirety of our second floor, so it’s about twice the size of our normal special exhibitions. Then, the stars aligned in this case: There are about eight or nine [distinct] sections in the exhibition, and we have eight galleries on the second floor. So it really fit nicely, a section per gallery.

“A lot of European institutions are in really old buildings, so they have smaller spaces and they do have to shoehorn it into spaces where they don’t fit. ... We have room for the exhibition to breathe here.”

Matisse in His Time, curated by Cécile Debray, scans like an epic conversation between Matisse and his colleagues in fauvism, his cubism experiments and his bold push into modernism. It contains nearly 50 of his paintings, drawings, prints and sculptures from the late 19th century to his death in 1954. It also includes an additional 50 works from Centre Pompidou, Musée d’Orsay in Paris and OKCMOA by contemporaries whose work either commented on Matisse or influenced him. Featured artists include Pierre-Auguste Renoir, André Derain, Georges Braque, Joan Miró, Amedeo Modigliani and, perhaps most importantly, Pablo Picasso.

“It’s really about Matisse in relation to other artists throughout his lifetime,” Anderson said. “It’s Matisse at the center of these various movements of European modernism in the first half of the 20th century. The exhibition starts in the studio of Gustave Moreau, who led the most radical studio against the salon in the late 19th century, and Matisse was one of his students, as were a number of artists Matisse would be close to throughout his lifetime.”

The works from this time period veer close to being collaborative. In one series collected for the exhibit, Matisse and Albert Marquet rented fellow fauvist Henri Manguin’s studio in Paris and hired a female model to pose nude. The session resulted in two similar works from Matisse, “Marquet Painting a Nude in Manguin’s Studio” and “Nude in the Studio,” and Marquet’s “Matisse in Manguin’s Studio,” all of which depict the other artist hard at work. 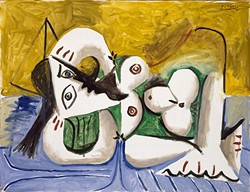 Matisse in His Time then moves forward through the genres that Matisse helped define as the center of French and European modernism, including fauvism, cubism and surrealism. Works such as “French Window at Collioure” from 1914 show how Matisse’s newfound friendship with Picasso spawned his cubism experiments, while other works such as 1909’s “L’Algérienne” show how far ahead of his contemporaries Matisse could be. That work, which adorns OKCMOA’s Matisse in His Time catalogue, predates the odalisques Matisse painted in the 1920s, depicting a Moroccan harem. “L’Algérienne” is also the subject of what Anderson refers to as an artistic conversation between Matisse and Picasso. In its posture and subject matter, Picasso’s “Nude in a Turkish Hat” from 1955 comments on “L’Algérienne,” and 1960’s “Woman Lying on a Blue Sofa” does similar work with Matisse’s erotically charged “Odalisque with Red Pants.”

The relationship between Matisse and Picasso often gets depicted as a rivalry between the leader of the fauvist movement and the greatest cubist. But Anderson said that Matisse’s death in 1954 devastated Picasso, who considered Matisse his only real peer. For years, Picasso created homages like “Nude in a Turkish Hat” to honor his friend.

“One of the artists would paint a work, the other would see it and then respond by painting a work that would dialogue with the previous piece,” Anderson said. “They were friends, but it was a friendship that was also a fierce competition. They were frenemies.”

Once Matisse in His Time closes, many of the works will return directly to the Centre Pompidou and will rarely leave Paris’ 4th Arrondissement again. It is a rarity Anderson said should be appreciated during its Oklahoma City summer vacation.

The impact of the exhibition will likely linger for years, if not decades. After the pieces are removed and most of them shipped back to Paris, there will likely be an assessment from the world’s art community regarding OKCMOA as a potential destination for great works. Anderson said he believes Matisse in His Time represents a paradigm shift for his museum.

“Once you show you can do it, that’s the first step,” he said. “It’s a game-changer for us as an institution.” 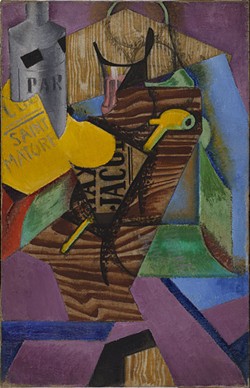 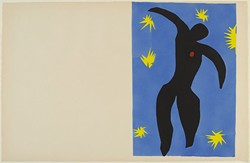 Print Headline: Monumental Matisse, OKCMOA’s role as an important museum is cemented with the only North American exhibition of Matisse in His Time.

Matisse in His Time: Masterworks of Modernism from the Centre Pompidou, Paris