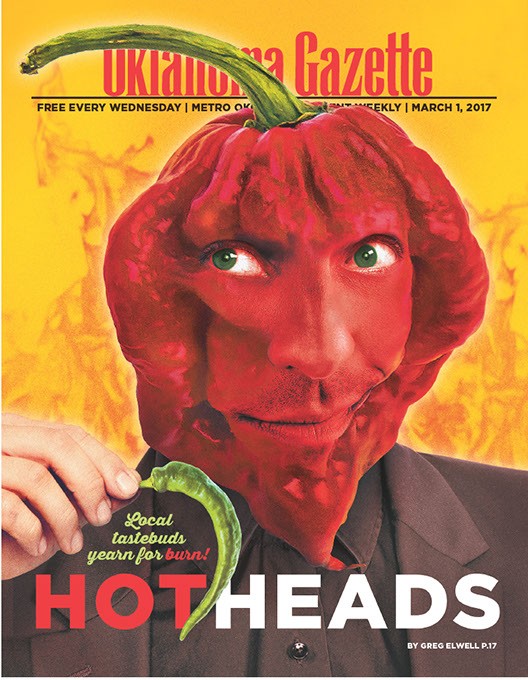 There is such a thing as “too hot,” but that doesn’t stop metro residents from seeking out the city’s spiciest dishes.

After showing off his fish tanks, greenhouses and the rows where vegetables will soon begin breaking through the ground, Russell Cox reopened his tiny general store near the gated entrance of Tilapia Garden Farms.

The building is mostly empty now, as all the fresh produce he raised last year is long since gone, but on a table up front sit dozens of tiny shakers of dried ground chiles.

The most popular variety sold is, of course, jalapeño.

“Everyone can eat jalapeños,” he said.

The same can’t be said for some of the others on the table, like bhut jolokia (or ghost peppers), naga viper, moruga scorpion peppers and the Guinness World Record holder for hottest chile, Carolina Reapers.

Asked if he has ever eaten a whole Reaper, Cox cocked his head and peered through his glasses like he’d never heard anything so crazy. 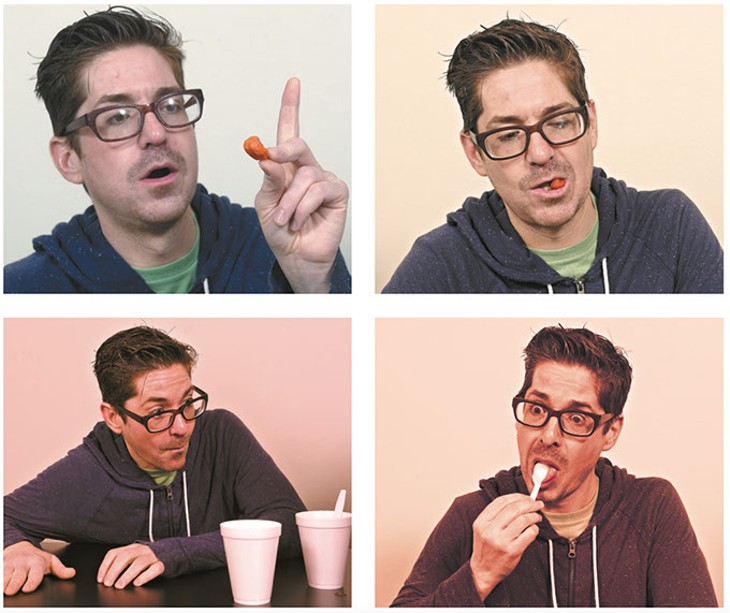 A few days later, in the Oklahoma Gazette offices, two brave men sat down to a taste test of pain.

Weers is a self-proclaimed experience seeker.

“I actually don’t love spicy foods, but maybe I’ll love it after this,” he said.

Brown is a longtime spice lover who regularly seasons his food with over-the-top heat.

“Honestly, I never thought about it, but I think the truth is probably pretty stupid,” he admitted. “I think eating spicy things was the only ‘macho’ thing I had to relate to with the males in my family.”

Now he’s so acclimated to the heat that nonspicy dishes just taste bland.

“I’ve burned off most of my taste buds, so everything has to be on fire or I won’t really taste it,” Brown said.

Both Matts were excited and hesitant as they faced the prospect of sampling Carolina Reaper powder and raw ghost peppers.

When they could take no more, he and Weems gulped down chocolate ice cream to soothe their scorched palates. The wounds required constant tending.

“I liked hot stuff always,” he said. “My grandparents had the hot cherry peppers, and they were always feeding them to me, so I built up a tolerance.”

Now he’s very nearly immune to the potency of the “superhots,” including Carolina Reapers.

“A couple of my buddies, they watch me eat stuff and they freak out. But it doesn’t really bother me. I can’t explain it,” he said. “We’ll make stuff like moruga brownies and scorpion [pepper] ice cream.”

Taste and spice don’t always go hand in hand, Daddio said. When he and his coworkers amassed a hot sauce collection of nearly 1,000 bottles, they found that the hottest are often the least appetizing.

“They taste terrible,” he said. “Some of them are almost pure capsaicin, so there’s not much flavor to it.”

Daddio is a fan of flavorful habaneros and Butch Ts, a more piquant strain of Trinidad scorpion peppers.

“I grew up around hot food. As I get older, I kept thinking, ‘This is good. Could be hotter,’” he said, then admitted, “I have had something too hot once.”

At now-closed Chubby’s Chicken, Castro ordered the hottest wings the restaurant could give him.

“I think they were trying to teach me a lesson,” he said. “It was heat from capsaicin extract, not from just chiles. I tried one and thought, ‘There is no way I can finish this wing.’ Then I ate all 12.”

The experience left his lips and mouth feeling raw, but generally, he finds a lot of pleasure in spicy foods.

“I love the ways it feels exciting, and you get layers of sensations and flavors once you get into the hotter foods,” Castro explained. “It just makes your nostrils open up and get ready.”

He said his son inherited his passion for peppers, too.

“He ate some ghost pepper cheese at a friend’s house and was all about it after everyone fussed,” he said. “We mess around with fermented hot sauces here,” said Mary Eddy’s Kitchen x Lounge executive chef Jason Campbell, who dabbles in hotter menu fare for the restaurant. “We’re waiting on a local farm to grow datil peppers for us. I’m from Florida, and they are native.”

“Not a ton ask for it, but we have the firepower ready to go,” he said.

Campbell spends a lot of time in the kitchen, but when he’s dining out and wants to turn up the heat, he visits Szechuan Bistro, 1010 W. Memorial Road.

“Gotta order off the back of the menu for legit items,” he said. “Always ask for extra mala.”

Mala is an oily Chinese sauce that is so spicy it numbs the mouth.

“I love the rush you get from the heat and think it’s cool how many flavors there are in different peppers and spices,” Campbell said.

Asian spices also are a favorite of local baker Katie Pennington, who said she’s always on the hunt for the hottest dishes in Oklahoma City.

“I’m currently interested in finding out what the real heat scale is for a Thai place in my neighborhood [Thai Orchid Bistro],” she said.

Pennington said she was surprised to learn that some restaurants serve different levels of spicy food depending on the nationality of the customer.

While she thought she’d been served the hottest dishes, Thai Orchid served her “American hot” instead of food on the more intensely spicy “Thai hot” scale.

“So when you order Thai food and say you want the hottest they make, they give you like between a one and a three [on the Thai scale],” she said. “But the heat can actually be served at a 10. I had no idea restaurants did this until speaking with the owner.”

She discovered in many Oklahoma restaurants, protecting American mouths seems to be a top priority.

“Sheesh Mahal’s hot red chicken and the green sauce at Taqueria La Peque are the two hottest foods I’ve had in OKC,” she said. “But I will be putting the Thai heat index to the test this week and ordering a 10 on the scale.”

Thai Orchid, 340 S. Mustang Road, in Yukon makes its dishes fresh to order. Its owners also are extremely friendly, she said, which is a plus when customers sometimes want dishes that can literally make grown men cry.

“[The owner] said a police officer came in and talked them into giving him a 10 and he was in tears afterward,” Pennington said.

The lure of extremely hot foods has been with her since youth, but it wasn’t until she was living in Texas that she began actively hunting for spice.

“The best thing anyone can get from a food is wanting just a little bit more,” she said. “Salty and sweet does that, and so does heat. Super-hot food makes you feel like you can’t take it anymore while simultaneously reaching for another bite.”

Heat adds depth to simple foods, dimension to scrambled eggs or chocolate, she said. Sometimes it can go too far, though.

“While trying to make my own curry for the first time, I blindly chopped up some Thai green chiles and threw them in the pot,” she said. “I had no idea how hot such a tiny pepper could be. It was inedible.”

“I’ve been into it since high school. I was a freshman, and I went to Buffalo, New York, with my aunt and uncle and tried wings at the bar where they were invented,” he said. “It started as a test of wills with my uncle, and it became a big part of my diet.”

Like Pennington, he discovered Thai food can hurt on a whole different level at Panang Thai Restaurant in Edmond.

“Order it hot on their scale. It will cause you a great deal of problems,” he said.

Part of the fun of eating spicy foods is the challenge, Porter said.

“I’m a big fan of turning normal life stuff into games and silliness,” he said. “Plus, on the other side of pain, there is always a rush of whatever chemicals your brain sends through you to balance you out — adrenaline and whatnot.”

“We call them pepperheads,” said Cox of the people who seek him out at Tilapia Garden Farms.

He sells two pounds of some of the hottest chiles to Chelino’s Mexican Restaurant every few weeks.

This year, he’s bumping up the number of pepper plants and focusing on the exotic varieties so many locals prize. The best season for growing superhots is in Oklahoma City’s super-hot summers, he said. Cox processes the peppers for customers by cutting them in half, dehydrating them for 30 hours and then grinding them while he wears two pairs of gloves and a mask. Even with all that protection, he still has issues with the heat.

“After a while, the Reaper gets in your skin,” he said. “When you take a shower and that hot water hits, wooo!”

And though Cox has nibbled a raw Carolina Reaper, he’ll leave devouring the chiles to the pepperheads. 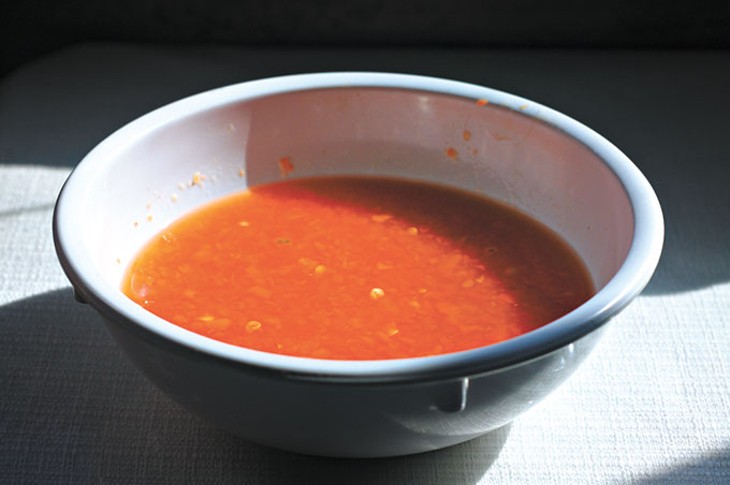 Wearing gloves, dice all the peppers and combine them with minced fresh garlic and chopped tomatillo, and salt to taste. Add in chopped fresh cilantro, and then blend.

Wilbur Scoville was an American chemist who will forever be linked to spicy foods. In 1912, he developed the Scoville Organoleptic Test to rate chile pepper pungency. Basically, he diluted pepper extracts with sugar syrup until its heat could no longer be felt. The more it was diluted, the higher the heat units. Bell peppers are exceptionally mild, so their score is zero. But as home gardeners and botanists continue cultivating new strains of hot peppers, the upper limits of the Scoville Scale creep higher. In 2013, “Smokin’” Ed Currie’s Carolina Reaper became the Guinness World Record holder for hottest chile with an average rating of 1.56 million Scoville heat units. Lots of peppers can burn you out, but how do they taste? Here’s a guide to some of the most popular chiles around.

Poblano Scoville heat units: 1,000-1,500 Excellent grilled or stuffed, as in a chile relleno dish, pobla- nos are some of Mexico’s most popular peppers. They have a mild, earthy flavor and a manageable heat. Their thicker skin means they’re best eaten when cooked.

Jalapen?o Scoville heat units: 2,500-8,000 Jalapen?os are ubiquitous because they’re easy to grow and havea crisp, green flavor and a heat that can span from “not too bad” to “please, waiter, I need another glass of milk.” 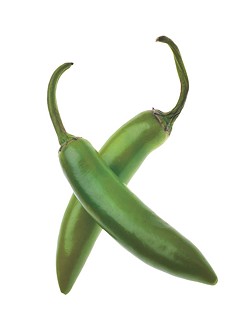 Serrano Scoville heat units: 10,000-23,000 About five times hotter than jalapen?os, serranos are longer and thinner but with a jump in heat. Their thin skin makes them easy to eat raw, especially chopped in fresh salsas. 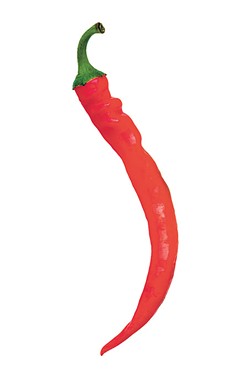 Thai Scoville heat units: 50,000-100,000 Sometimes called bird’s eye chiles because of their shape, Thai peppers are small but powerful. They have a grassy flavor that is quickly overwhelmed by their heat. 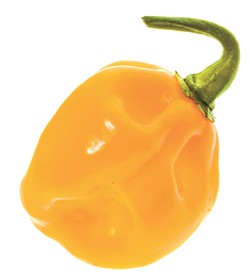 Habanero Scoville heat units: 100,000-350,000 Bright orange and thin-skinned, habaneros are becoming more common in grocery stores and in recipes. The chiles are known for intense heat and a fruity, floral flavor that makes them tasty in salsas.

Ghost Scoville heat units: 855,000-1.04 million Bhut jolokia is an Indian fruit that has amassed an interna- tional following for its blistering heat. How hot is it? The Indian military uses them in smoke bombs and residents use them to ward away elephants. 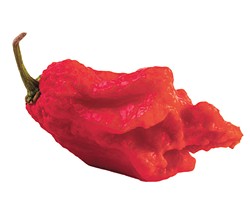 Carolina Reaper Scoville heat units: 1.4 million-2.2 million Bred for a heat that rivals commercial pepper sprays, Carolina Reapers have an earthy flavor that is vastly overshadowed by their menacing pungency.

print headline: Heat wave, There is such a thing as ‘too hot,’ but that doesn’t stop metro residents from seeking out the city’s spiciest dishes.