New York City is the city that never sleeps.

Oklahoma City might as well be called The Big Drowsy the way we shut down when it gets late. But if you know where to look and you don’t mind exploring a bit, this is a city full of overnight bites just waiting to be devoured.

Those who want to eat at 8:30 or 9 p.m. might think they have it rough, but the real struggle begins at 10, when most of the city’s ever-expanding roster of restaurants flip the sign to closed and start hosing down the dining room.

Which is why there’s Chow’s Chinese Restaurant, 3033 N. May Ave. Chow’s has long been a favorite of the city’s kitchen staffers because it keeps cooking (and cooking well) after others have closed. Since there’s plenty more on the menu for the evening, this is a good place for a snack. If you’re with friends, a plate of dumplings (12 for $6.95) will do. Or get a little crazy with some salt-and-pepper frog legs ($13.95).

If it didn’t close at 10:30 p.m., Chow’s would be a fine place to while away the night. This menu runs deep and gets weird; if you want to try pork intestine or beef tripe, at Chow’s, chefs know how to cook. 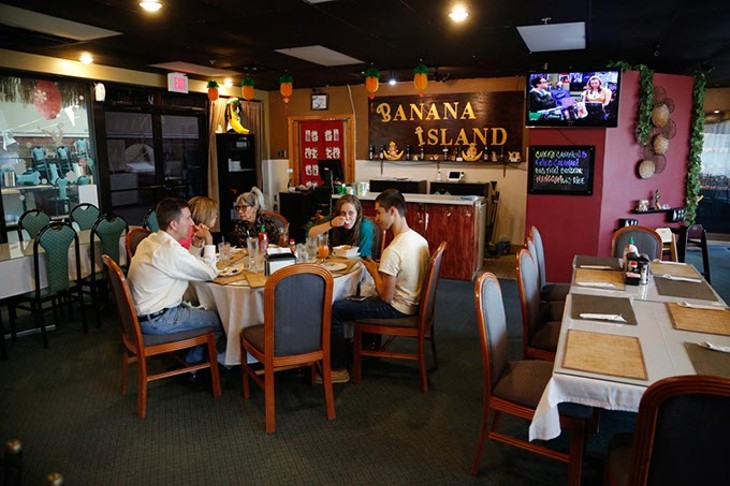 For Asian fare that lasts a little later, Banana Island Restaurant, 1117 NW 25th St., serves up a stunning and stuffing menu of Malaysian food until 11 p.m. A roti canai (Indian pancake) dipped in curry is just $3.25.

Depending on how you want the rest of your night to go, you’ve got a few choices for your next stop. Let’s choose our own adventure with a quartet of spots that close at midnight. 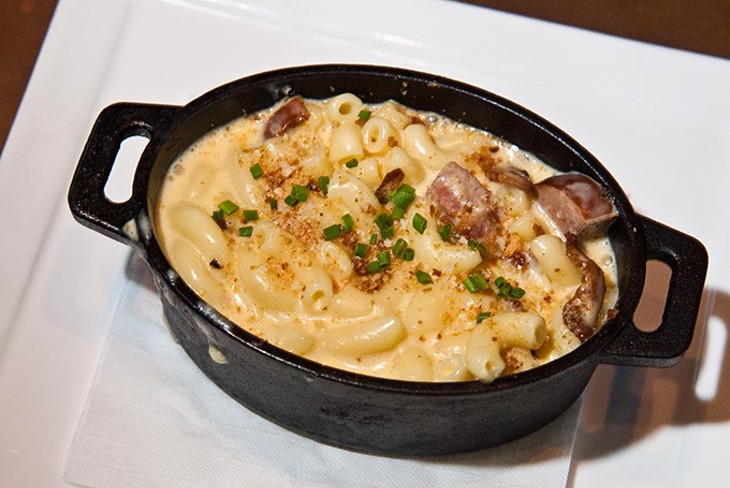 If you want to start Ubering everywhere because of alcohol, turn to Republic Gastropub, 5830 N. Classen Blvd., where there are great eats and great drinks, both of which will go down your feed hole. This is probably the best place to go if you want a good steak after 10 p.m. — like the wood-fired rib eye for $24 — and a selection of beers so fine you’ll think it was made of an angel’s chest hair. 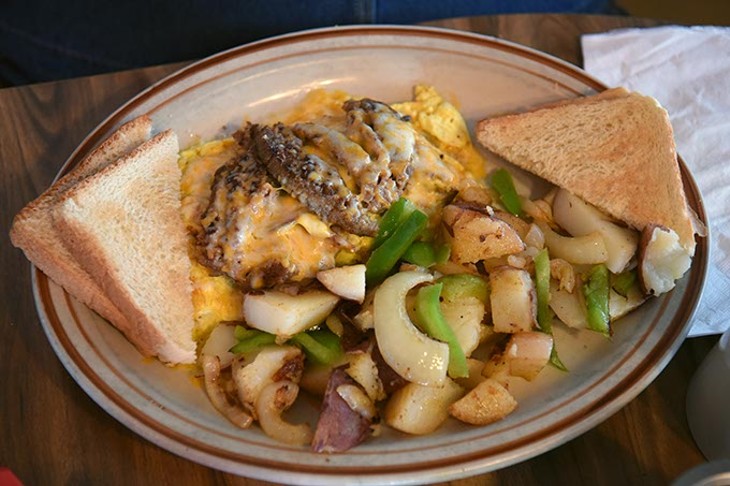 If you plan to keep driving yourself and you want a big gyro to help lull you into a coma, turn to Chelio’s Diner, 1621 S. Interstate 35 Service Road. It’s a diner, but not an all-night one, so hold your horses. This is a great choice if you like staying relatively sober and enjoying satisfyingly fatty foods.

If you want a piece or several of pizza, then turn to one of the Plaza District’s favorite watering holes, Empire Slice House, 1734 NW 16th St. Be ready to suck in your belly and squeeze in, though, as this popular spot might stop serving pizza at midnight but it won’t stop being busy. 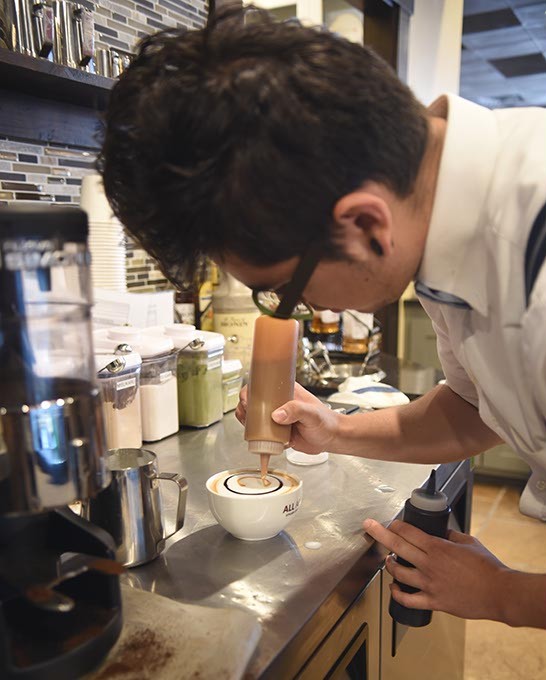 If you aren’t even a little bit ready to sleep yet, turn — as I did — to All About Cha, 7300 N. Western Ave. Not only does it have salads, sushi and such, but it has that essential elixir of late-night roustabouts: coffee.

A large espresso and a large coffee are $3, or you can actually enjoy your caffeination with the affogato ($4.50). It’s a scoop of ice cream with a hot shot of espresso poured over the top. This is the dessert coffee frappuccinos wish they were.

You’ve made it: It’s officially tomorrow. So whatever you’re eating now goes on tomorrow’s ledger. It’s like starting with a completely clean slate. Let’s get it dirty immediately! 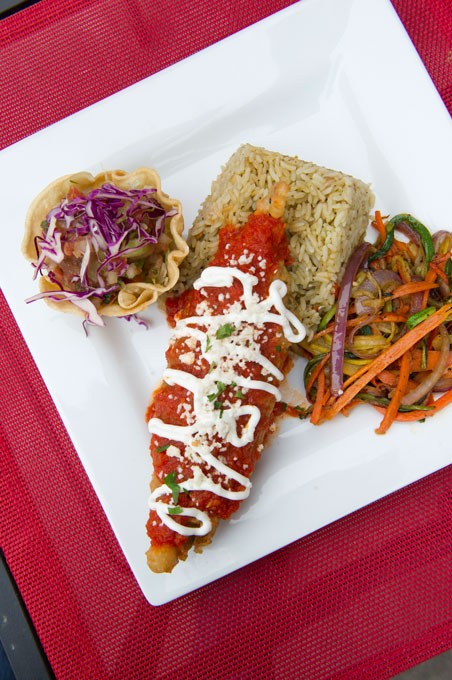 If your movie just got out or the baseball game just ended or, for some reason, you drove to Bricktown at midnight, you have a couple of options. There’s Yucatan Taco Stand Tequila Bar & Grill, 100 E. California Ave., which is open until 1 a.m. and has a fine selection of foods folded inside tortillas from which to choose. My choice is the aged chorizo taco, which sounds spicier than it actually is. There are a surprising number of adults who are not sober in this location.

But to see real party people, head a few blocks over to Hot Dog OKC, 208 E. Sheridan Ave., where proprietor Gale Van Campen grills up hot dogs and sausages, sells swag and broadcasts live on her wienercam. The line grows quickly as revelers stumble out of dance clubs and over to her cart.

Perhaps you’re in Norman, in which case you might like Fuzzy’s Taco Shop, 752 Asp Ave., which stays open until 3 a.m. Don’t assume all metro-area Fuzzy’s have the same policy. They don’t.

Hey, were you the people who Ubered to Republic in the last section? Then you might also be the ones who Ubered to one of the city’s swankiest late-night clubs, The R&J Lounge and Supper Club, 320 NW 10th St. While there are plenty of beverages available to continue your debaucherous fun, this establishment also serves up its full menu of favorites until closing time. Cocktail wieners, a lobster roll and beef stroganoff? I don’t mind if I do.

If you’ve chosen Saturday night-Sunday morning for this particular evening’s adventure, R&J starts serving the next day’s brunch menu after 11 p.m. You probably haven’t died yet, but this is pretty close to heaven.

Let’s be honest, though. If it’s this late and you’ve lived in Oklahoma City for more than a minute, you really want Bobo’s Chicken, 1812 NE 23rd St. Smoked for 24 hours before hitting the fryer, the wings at Bobo’s are delectable. And when the man in the truck says, “You want honey?” you better say yes because he’s about to glug a bucket of syrup on top of your dinner.

Once 3 a.m. hits, the only places open are the ones that never close.

There’s Mama Lou’s, 1421 N Moore Ave., and Perry’s Restaurant, 7432 S. May Ave., which specialize in diner fare. If you’re looking for late-night meatloaf, spaghetti or a tuna melt, these are your destinations. 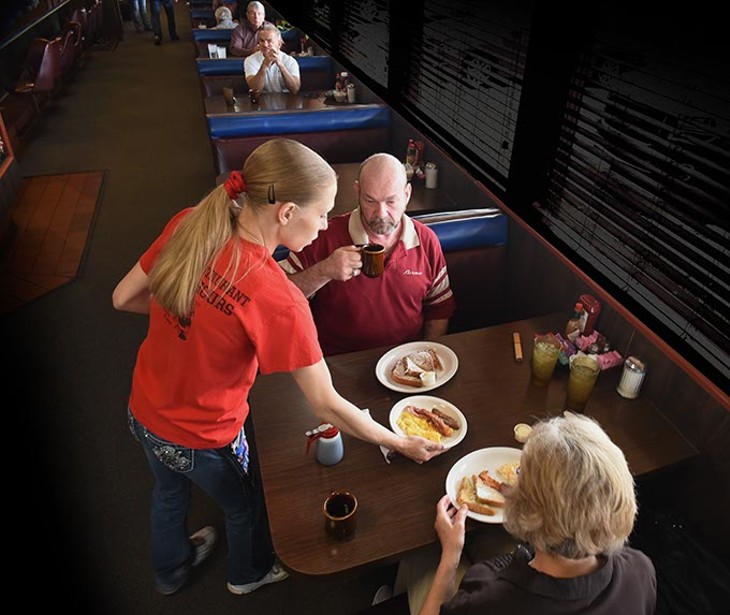 Maybe you didn’t get your fill of chicken at Bobo’s, in which case you ought to head to Beverly’s Pancake House, 3315 Northwest Expressway, for its famed Chicken in the Rough. Or, since the sunrise isn’t that far off, you could just have some breakfast already: corned beef hash and eggs or a giant waffle studded with pecans. Or both.

Beverly’s is a great place to establish an alibi, because even at this ungodly hour, it’s packed. The neon golfing chicken sign beckons to all.

For the truly ravenous, there’s Crest Foods, 4503 NW 23rd St., which will readily sell you food that you have to prepare yourself, like some kind of animal.

Congratulations! You are no longer a screwball for staying up so late! There are farmers and grad students and weirdos who like to get up early that are awake now. And they like doughnuts, which is why so many doughnut shops are open at 5 a.m.

For jelly-stuffed doughnut holes, the perfect eye-opening sugar bomb, turn to Best Donuts, 2320 NW 23rd St. Or if you want someplace that was apparently named just for the early morning crowd, there’s AM Donut, 2900 N. Pennsylvania Ave. Either one will provide you with circles of fried dough dipped in sugar or glazed with maple. And coffee. You should definitely order some coffee. 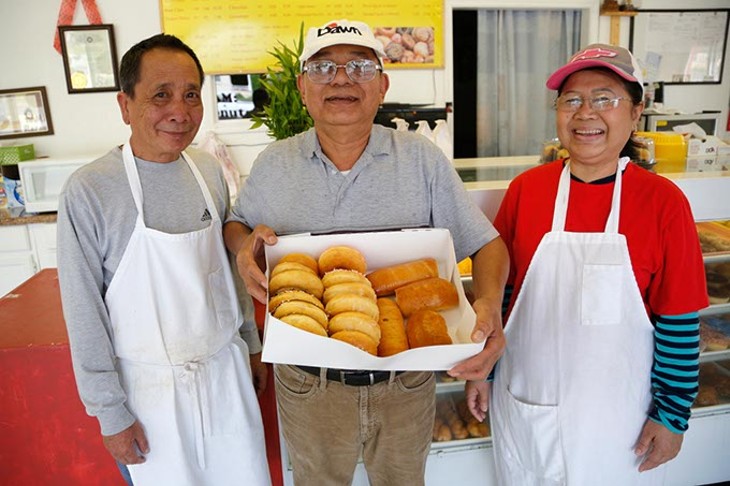 By 6 a.m., most diners are open for business. For one of the best omelets around, there’s the original Jimmy’s Egg at 1616 N. May Ave. Sit at the counter and watch those wizards flip and fold eggs over and around such diverse toppings as ham, bacon, cheese and more cheese. 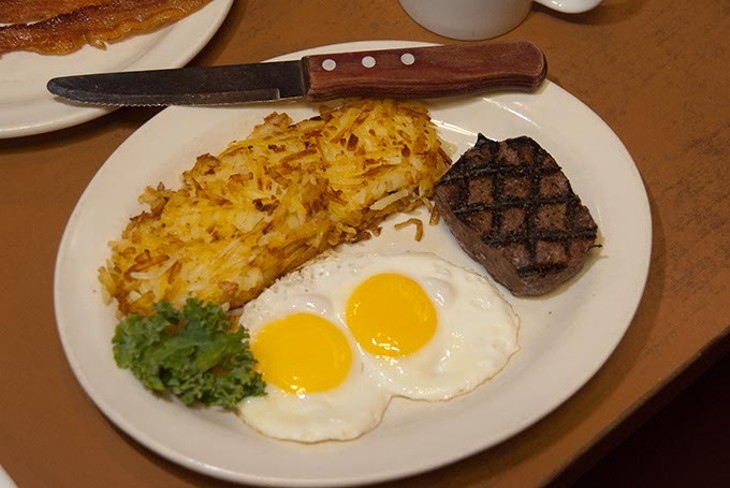 What about a steak? Cattlemen’s Steakhouse, 1309 S. Agnew Ave., has a fine breakfast buffet, but it also cooks whole chunks of cow. There’s nothing quite so fancy as starting your day off with a filet and a couple of eggs. (Unless you brush your teeth with caviar, Mr. Trump.)

Once 7 a.m. hits, the world is your oyster. Jimmy’s Round-Up Cafe, 1301 SW 59th St., has enormous chicken-fried steaks and piles of fried potatoes to soak up the night’s revelries. And Evoke, 103 S. Broadway, in Edmond has enough coffee to keep you wide-awake until lunchtime.

Or if you’re full and you’re tired and you’re ready to submit to slumber’s sweet embrace, maybe it’s time to go to sleep. Just don’t go too long or you’ll wind up wide-awake and hungry again tonight,

too. Though now that you know the secrets of Oklahoma City’s late-night eats, that’s not such a bad thing, is it?

Hungry? Up late? Well, you’re in luck. Oklahoma Gazette’s roundup includes everything from Chinese to rib eye steak and, of course, breakfast.