May said prep work is vital when creating The Diner’s great omelets. Cooks saute peppers, onions and other ingredients before the eggs start sizzling. 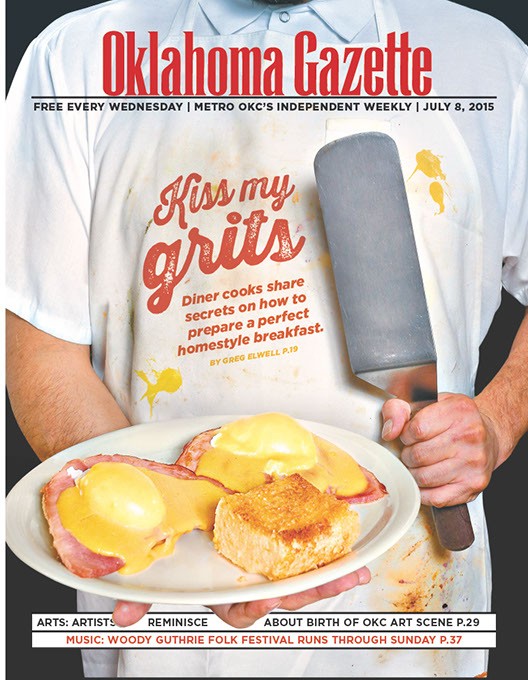 There. We were all thinking it, but someone finally had the guts to say it. They aren’t fluffy or tender. They’re dry, burned on one side and raw on the other.

And you don’t even want to know what people think about the fried eggs. And why is half the bacon burned when the other half is still raw? Did someone forget to take these biscuits out of the metal tube before sliding them into the oven?

Breakfast might be the most important meal of the day, but it’s rarely the best, unless you’re sliding into a vinyl booth at your local diner. Day in and day out, wizards in kitchens across Oklahoma City create meals that make us happy we got out of bed.

Relax, because that home-cooked breakfast is about to get a whole lot more delicious as Oklahoma Gazette shares easy tips from authentic diner cooks.

At Jeff’s Country Cafe, the pancakes taste almost like funnel cakes. They have crisp edges — almost lacy — but they’re not too thin.

Put away that knife because it’s unnecessary. These cakes are delicate enough to cut with a fork yet sturdy enough that, even drenched with syrup, each bite makes the treacherous journey from the plate to your mouth in one piece.

Buttermilk is important because it gives the batter a bit of tang and its mildly sour taste helps the butter and syrup flavors stand out.

The right proportions count, of course, but a big mistake many home chefs make is thinking a box of shelf-stable pancake mix is as delicious as a recipe you put together yourself. Packaged mixes are designed to not go bad, but that doesn’t mean they’ll be good.

If you’re making pancakes this weekend, grab a half-gallon of buttermilk while you’re at the store. Luckily, there are plenty of uses for leftover buttermilk; it’s included in fried chicken batter, pies and delicious biscuits.

Speaking of biscuits, the staff at The Diner in Norman makes pretty mean ones. Manager and server Shelley May said the key is to start early.

“Making biscuits is something that can’t be rushed,” she said. “I’ve seen lots of cooks come through, and the ones who are most successful seem to be the ones who take their time.”

Try not to overwork the dough, either. Once the ingredients come together, stop mixing or you risk activating gluten. Overmixing creates leaden, tough, gummy biscuits not even The Diner’s gravy can soften.

And you’ll want a nice, featherlike biscuit to sop up runny egg yolks just like the ones you get at Jeff’s Country Cafe. 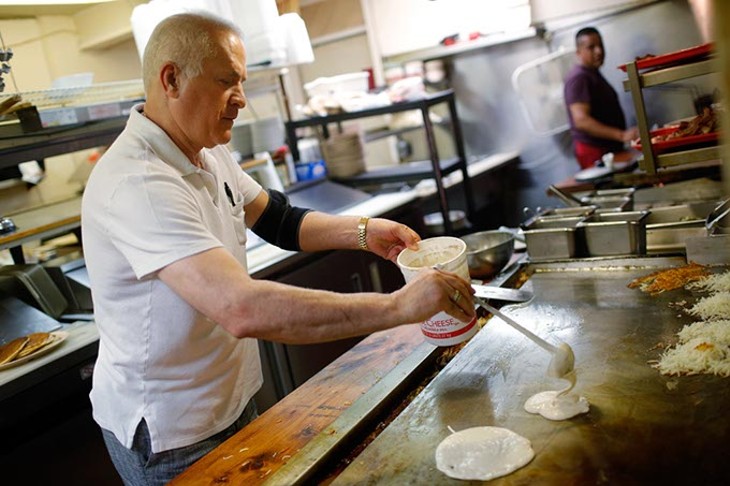 Ghandnoosh said his cooks can make any type of egg, but the one most sought after (but least known) is a diner classic called basted eggs.

If you’re tired of the yolks breaking as you flip your sizzling eggs, the easiest solution is to … stop, just stop already. Basted eggs are prepared sunny side up (no flipping!), and hot grease is spooned over them until the white around the yellow yolk becomes opaque.

“We used to use a skillet, but we found a griddle was easier,” he said. “We know the right temperature to get them over-medium, so the white is set, but the yolk is still a little runny.”

It might take a little bit of trial and error to find your perfect egg-cooking temperature, but basting will be easy. Cooks just spoon the fat they’re using to cook the egg — be it butter, bacon grease or oil — over the top.

For a healthier version, place a heat-resistant lid over the egg. The trapped heat steams the top of the egg while it helps it finish cooking, which also means fewer popped yolks.

And what goes better with eggs than chicken-fried steak?

It doesn’t take a deep fryer to make a great chicken-fried steak, but it helps. All you need are good cube steaks, seasonings and a little time.

50’s Cafe doesn’t serve pre-made chicken-fried steaks out of some box. Instead, it takes tenderized cube steak, seasoned flour and egg wash and makes it by hand.

There’s no need to use a fancier cut — it’s a waste, said manager Heather Lowe.

“The reason people use cube steak is because it’s tenderized to be eaten easily and all the texture holds onto the egg and flour better,” she said. “That’s how it gets that signature crust.”

To build up a lot of flavor, cooks here start by adding Montreal steak seasoning and garlic powder to flour and coat the steak with the mixture. Then it goes into an egg wash — a dish filled with beaten eggs and sometimes a little milk — before it goes back into the flour.

While 50’s Cafe has a deep fryer at its disposal, a good cast iron skillet coated with almost-smoking vegetable oil works well for home cooks. Cook to a medium brown on one side before flipping. But don’t cover it or the residual heat will steam it up and turn that beautiful crisp crust into mush.

After both sides are golden and glistening, set it aside for a few minutes before digging in.

Abraham’s Western Cafe owner Abraham Essaili said the key to many of his menu items is hours and hours of preparation. Hash browns spend a little time on the griddle to partially cook, or par-cook, so when it’s time to serve lots of customers, he can toss them back on the grill — with clarified butter ladled over them — to create that classic crunch so many diners love.

Lowe said the same is true for the home fries at 50’s Cafe. Potatoes are boiled first thing each morning, and with the initial cooking out of the way, the process is vastly sped up when it’s time to toss them on the griddle with butter and Montreal steak seasoning. The result is tender, cooked-through potatoes with a beautiful, crisp, tasty crust.

“We cook our bacon in the oven in the mornings,” he said. “It cooks off the grease and stays flat. Lots of people try cooking it in the pan and it ends up shriveled and burned.”

For diner-style, perfectly cooked bacon, lay strips on a jellyroll pan or on top of a rack over a sheet pan. Oven-roasting cooks each piece evenly, giving you crispy bacon with a hearty, meaty chew.

Each morning, Essaili par-cooks his bacon and sausage patties and returns them to the grill as customers order them, making sure they’re hot and have that fresh-from-the-griddle crispiness.

May said prep work is vital when creating The Diner’s great omelets. Cooks saute peppers, onions and other ingredients before the eggs start sizzling.

“Think of it like a stir-fry,” she said. “Ingredients have to be ready before the eggs even begin.”

But when you do start, make sure you’re using the right-sized pan and don’t skimp on the oil. Once it has got good heat going, pour in your beaten eggs and let them start to set. Pull in from each edge of the pan to let uncooked egg flow out and start cooking.

“You’ll know it’s ready to flip when the edges are set and the omelet slides in the pan,” she said. “As for the flip, you have to practice. I practiced over the sink.”

Once it’s flipped, immediately add cheese and those sauteed ingredients. But don’t fold it in the pan, she said. Let it fold onto the plate.

If it all falls apart, just shove it inside a tortilla and call it a breakfast burrito, she said.

Like any other kind of cooking, making a great diner-style breakfast requires repetition. Keep making pancakes. Keep experimenting with omelets. Keep oven-roasting that bacon. And if you still happen to burn everything, there’s probably a diner nearby.

The cooks might have held back a secret or two, just in case.

Print headline: Kiss the cook, A little bit of prep goes a long way in creating your own delicious, diner-style breakfast at home.