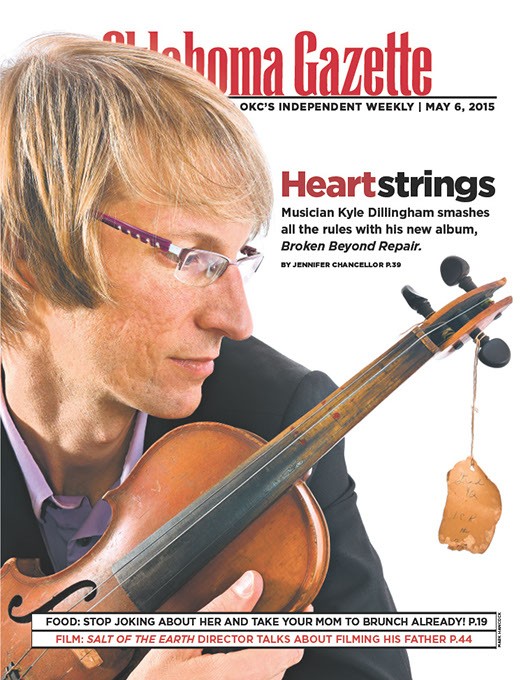 Kyle Dillingham says that his new album, Broken Beyond Repair, was inspired by a visit to an orphanage in Togo, West Africa, and the resilience the youth there showed despite tremendous adversity.

A read through the album’s liner notes also reveals a quotation of Matthew 11:28: “Come to me, all you who are weary and burdened, and I will give you rest.”

However, with this album, Dillingham proves that his motivation for playing is as locally derived as it is spiritual. He dedicated the record to Dena Bagwell, owner of Inter-City Violin Studios in Oklahoma City. The shop was founded in 1956 by her father, Herbert W. Bagwell, who helped establish the city’s first string instrument program in Oklahoma City Public Schools and was a charter member of the Oklahoma Philharmonic. At age 19, Bagwell also became chairman of Oklahoma City University’s (OCU) string instrumental department.

In his lifetime, Herbert mentored Dillingham, along with thousands of other local students.

“There’s a lot of Daddy in Kyle,” Dena said. “He kept the music going after my daddy died.”

Dena, who turns 80 next month, still runs Inter-City six days a week. She called Dillingham “my very best young friend” with a kind and keen sincerity that’s often heard from great teachers. Her statements are unequivocal.

“I met Mr. Bagwell when I was 13 years old,” Dillingham said of Herbert in a recent visit with Oklahoma Gazette.

The man asked the boy to play a song, and he chose the classic Western tune “Faded Love” written by Bob, John and Billy Jack Wills.

Dena remembers that day, too.

“My daddy called me that day and said, ‘Daughter, I heard a 13-year-old boy play “Faded Love” like I’ve never heard,’” she said. “He taped it. He was so intrigued by Kyle’s version that he wrote an arrangement based on it.”

When he was younger, Dillingham often held band rehearsals in the Bagwell home and was a shop regular as a student of OCU’s instrumental music performance program. After Herbert had a stroke in the 1990s, Dillingham played for him almost daily.

“Mr. Bagwell passed away,” he said.

She welcomed him inside anyway, and he played for her family.

These days, he is family.

Dillingham held out a copy of his new CD and opened the cover to an image of himself holding a cardboard box full of broken violins.

And each came from Dena and her father’s shop.

For Broken Beyond Repair, Dillingham lovingly took these instruments and recorded each sound they made, from the hollow, reedy whispers caused by brushing the dust from their bellies to the sweet and sorrowful moans created from drawing his bow over strings that were decades out of tune.

He pointed to one and said it was last rented in the early ’70s before it was stored and forgotten after it was broken beyond repair, meaning it would cost more to repair than replace.

Indeed, his album movingly connects Dillingham’s passion for playing violin and fiddle with the rich local history of his mentors, his own spirituality and the stories of our shared human struggles.

Dillingham wrote the music and words for six of the 12 songs on Broken Beyond Repair and recorded, mixed and mastered the album himself. Each song has its own personality, too, as listeners will hear tinges of folk, Western swing, classical music, bluegrass, gospel and Americana. 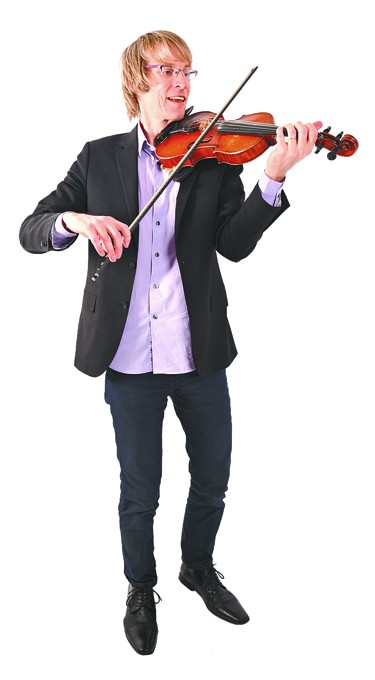 He compared the unexpected amalgam to the powerful spiritual connection he discovered in that box.

“Kids do what kids do,” he explained. “They put the instrument in their chair then accidentally sit on it and break it, or they get the necks intertwined while sword fighting. They break. These instruments can last for generations, but they’re not indestructible.”

But Dillingham discovered that they each found a new voice and a new life after so many decades of being forgotten.

“I can go anywhere today, and I mean anywhere — it can be a fancy dinner or to church,” Dena said. “When they find out I’m connected to Inter-City, I hear, ‘I rented my instrument from you when I was in school.’”

Dena immediately recognized the beauty in those long-quiet voices.

Not too long ago, it was Dena who invited Dillingham to play a broken violin for the first time in front of an audience.

Track five, “But for the Grace of God,” was written about that experience. Its lyrics are pulled from addiction and recovery literature.

“I gave him those lyrics,” Dena said and then chuckled.

She has been sober since 1976 and said that first performance was at a local FIRSTEP meeting.

“Those violins tell a more powerful story than words can,” Dena said. “For the rest of his and his children’s lives, they will hear ‘My son, daughter, mother, sister, daddy, husband, wife got sober with the help of this album.’”

“But for the Grace of God” is a discordant symphony that combines Dillingham’s bright vocals with expansive, layered chords and individual notes that, once blended together, remarkably resemble a reedy, traditional Scottish tune.

“There are sounds coming from these instruments that I have no idea where they came from … It’s like they’ve been reborn,” he said.

After a show, a woman came to him and asked him if she could keep the neck from a broken violin. She then clutched it to her chest.

“She said, ‘This is me,’” Dillingham said as tears filled his eyes.

The album is comforting and beatific and surreal, especially in his version of Christian hymn “How Great Thou Art.” His lone and intimate lilt blends with percussive string pulls and violin belly taps as he works his bow over its delicate strings.

The result is emotive and ethereal. It’s also extremely personal.

“I’m discovering that everyone relates to the sound and the stories of these instruments … People tell me everywhere I play that they relate to feeling broken and beautiful,” he said. “We don’t all have the same stories and life experiences, but, really, we do.”

Dillingham celebrates the release of his album with a free listening party and album signing 4-7 p.m. Thursday at All About Cha, 7300 N. Western Ave.

And, while he said he doesn’t plan on performing a full set, he said he will be there “with a box of broken violins for people to see and explore.”

“Faded Love” was written by Bob Wills, along with his father John and brother Billy Jack. Bob Wills rose to prominence in the 1930s, when his concerts from the stage of Cain’s Ballroom were broadcast live from coast to coast.

The tune hit No. 8 on national country charts in 1950. Today, Cain’s Ballroom is often called The House that Bob Built.

The song was also a recurring hit for musician Leon McAuliffe, who joined Wills’ band in Tulsa at age 18. McAuliffe went on to pay for the installation of a campus studio at Rogers State College in Claremore and helped fund its music program.