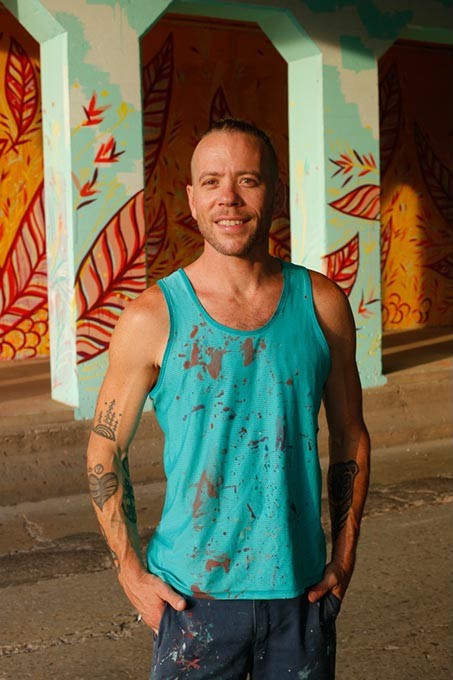 The goal of every painter, no matter the adjective-laden variation of the truth so painstakingly presented to us in an artist’s statement, seems to boil down to this: Try to create something the viewer can’t ignore.

In a culture that so often values efficiency over beauty and prefers the status quo to the sore thumb, that can be a tricky accomplishment. An artist can flail and dive through every style and medium imaginable, throwing enough work at the wall that something’s bound to stick. You do that and people call it erratic. An artist can poke at The Man in plain sight of the world, tagging his manifesto on the sides of abandoned warehouses and gentrified storefronts like a dare. But if you do that, people call it criminal.

On rare occasions, an artist can just get better and better at what he does until nobody can miss it. Once that’s done, they call it by your name.

Jason Pawley’s art is seemingly everywhere, and even if you don’t know him yet, chances are you’ve seen a Jason Pawley somewhere. The 40-year-old Oklahoma City native has left a wake of solo and collaborative art around the metro over the past few years, from murals in the Plaza District to the hawk on the side of VZD’s Restaurant & Club and the walls of Tall Hill Creative, 3421 N. Villa Ave., the gallery he operates with friend and fellow painter Ross Adams.

His newest and arguably most spectacular piece, “Cultivation,” is the literal entirety of the Bricktown underpass at S. EK Gaylord Boulevard and W. Reno Avenue.

After applying for a public art grant from Downtown OKC, Inc. last year, Pawley said he keyed in when the selection committee mentioned the underpass. After he was named one of four artists selected for funding, he began planning what quickly became his most ambitious project to date.

“It evolved into a piece I’m very proud of, but, man, that’s a lot of space,” he said, laughing. “It was very overwhelming to get down there and think about covering the whole surface. You have an idea in your mind when you begin the project, but when you actually see it, it was like, ‘How in the world am I going to do this?’”

With a little help during a couple of 24-hour stretches from Adams and friends Greg and Mike Bustamante, Pawley signed the wall after three weeks of 10-16-hour days. It was time that he mostly spent solo, rolling the high concrete walls for hours on end, stopping every few minutes to talk to curious fans, friends, tourists and drifters who wanted to know what he was working on. Pawley took off his headphones and filled each and every one of them in.

“They offered to put up a sign asking people not to disturb me, but I think that’s just part of it,” Pawley said. “If it’s public art, it’s for the public. I’m making it in public, and I’ve enjoyed it. I love the fact that so many people are interested in public art, and I’ve been happy to tell them about it. It’s a public experience.”

The experience for viewers has just begun. The visual effect changes depending on whether you’re driving or on foot, but it’s stunning no matter how fast you’re going. The repetitive, up-and-under motion of the leaves; the Day-Glo palette; the dark, dripping outlines — they’ve all become Pawley signatures, and the underpass stands as a definitive stamp on a city blooming with public art.

“You’re in an environment here, which is what I think makes it kind of unique,” Pawley said of painting the location. “Most murals are meant to be stood back from and looked at, but this mural is one you pass through. It’s different not only because of the close proximity but because it’s moving. I wanted to use that.”

He used it with color, specifically, a subtle, fading change from the south wall to the north that includes the pillars that stand between and break up the sunlight like ancient Roman aqueducts. They also give the piece a remarkable sense of movement, like you’re looking at a painting projected from a dusty, flapping film reel.

“It’s definitely a different experience whether you’re walking or driving,” Pawley said. “A lot of the flow of color on the sidewalk is slow to match the foot traffic. But there’s a gradient from one side to the other that matches all the colors of a sunset. That was kind of my concept, sunrise to sunset, and that’s something you can definitely see and experience with the speed of a car.”

Pawley said it was only after he began the project, however, that he knew how to harness the rhythms of a busy intersection.

“You’ll notice if you look that certain sections are less dramatic, have a slower feel to it,” Pawley said. “Some places are more energetic, though. I had to be down there, working, to feel it, to let it evolve. I had to feel the way it moved, and I tried to respond to that.”

As for how his distinctive style evolved to the point that it could beautifully cover an entire structure, Pawley credited some of his early education and years of honing what came naturally.

He received an art scholarship to Santa Fe University of Art and Design (formerly College of Santa Fe) and later graduated from the University of Central Oklahoma in 2000 with a Bachelor of Fine Arts in graphic design. It’s that design experience that blends itself through so much of his work, the murals, the collaborations, the labels for Black Mesa Brewing Company beer that he designed.

“That was my first higher education, looking into fine art and design,” Pawley said. “That’s where I learned about consistency, color theory, how things flow together. I learned what makes things pop, what makes things stand out. Graphic design and skateboarding is pretty much where I first got turned on to art.”

Since learning how to make things stand out, he has made a career from it. Tall Hill Creative’s monthly first Sunday shows (which coincide with Brass Bell Studios’ a block south) draw a salty, vibrant, loyal crowd, and the building itself serves as an ever-evolving canvas on which he, Adams and visiting artists experiment.

“I think it’s just built over a long process of trial and error,” Pawley said when asked why his work is so recognizable. “I try to paint as much as I can, every day if I can. Through those practices, you learn new techniques, new brushstrokes, new accidents. It just kept layering and layering itself, and eventually, it grew to where it is right now.” 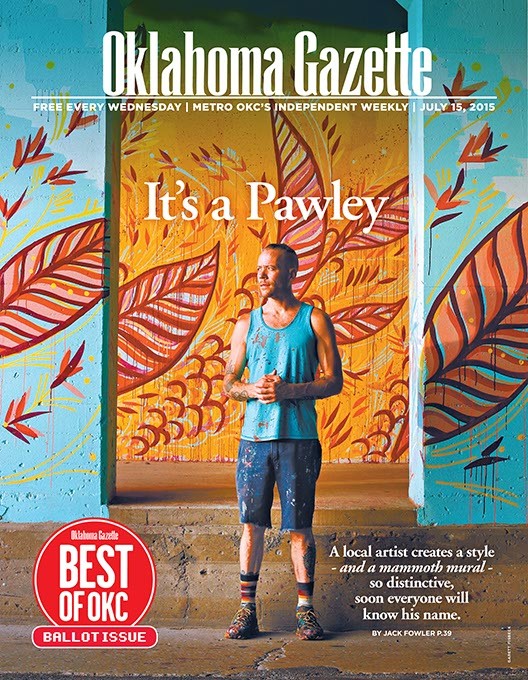