Federal policies and programs can strongly affect the daily lives of Americans and the states, cities and communities in which they live. Decisions made by the president — from executive orders and budget priorities to signing into law new regulatory policies — ripple from Washington, D.C. into local households.

All politics are indeed local.

When localizing these promises, many wonder what Trump’s “total change” might mean for themselves and metro-area communities. In his first 50 days in office, the president signed more than a dozen executive orders, one of which tripled immigration forces and intensified efforts to deport undocumented immigrants. As Oklahoma Gazette has reported, the measure was met with fear and anxiety among Oklahoma City’s immigrant populations, including religious minorities, college students and families.

Another executive order allows TransCanada to apply for its cross-border permit for the Keystone XL pipeline, transporting oil from Alberta, Canada, to Steele City, Nebraska, where it would connect with existing lines and travel south through Oklahoma and Texas. The order was greeted with high praise by oil and gas industry supporters and maligned by local environmentalists.

The next few weeks will continue to bring changes as the president’s full budget proposal is released and Cabinet picks settle into new roles. In the interim, the Gazette spoke with metro officials monitoring the local effects of the administration’s policies.

The day before Trump was sworn into office, a report circulated that his administration was crafting a list of agencies and programs that could see funding trimmed or eliminated. The National Endowment for the Arts (NEA) — the largest single funder of the arts in America — is one of those agencies.

Arts advocates have a strong message for congressional leaders, regardless of whether the impending federal budget proposal includes drastic NEA funding slashes. Early next week, Kirt and fellow Oklahomans, along with advocates from across the nation, will gather on Capitol Hill for annual Arts Advocacy Day.

The federal budget, which has been touted as lowering government spending, is the prelude to Congress’ appropriations process. Where congressional leaders stand on arts funding is uncertain, and a strong argument can be made about its effect on local communities, Kirt said.

“We have to speak to our congressional leaders that decisions are made locally for federal arts funding,” Kirt said. “I think there is worry that this is a national agency telling Oklahoma what to do in arts and culture, but really the money flows to the Oklahoma Arts Council, which has local priorities. … These are funds that really get a lot of local control.”

NEA receives about $148 million annually, or about 0.012 percent of the federal budget. Congress has argued the value of the NEA, as some see the agency as an unnecessary branch of government.

While state and local art organizations are often financed in myriad ways, when public funding is slashed, they become more dependent on state and private dollars. In recent years, state and private dollars also have dwindled due to budget holes and local economic volatility, creating a vise that wrings out budgets and opportunities. Supporters of public art funding argue many important organizations cannot survive without public funding.

Kirt said advocates must stand ready to share how arts and culture illuminate their inner lives and enrich their world.

“Don’t assume everyone understands the value of art,” Kirt said. “For people who love the arts or are involved in the arts, they assume others have experienced the benefits of the arts. You have to help people see.” Another of Trump’s campaign promises is to revitalize U.S. roads, bridges and airports. In late February, the president called on Congress to invest $1 trillion in a national infrastructure program.

The promises piqued the interest of City of Oklahoma City officials.

Oklahoma City received $45 million in federal funding, or about 4 percent of its annual budget, for fiscal year 2017, according to its City of Oklahoma City 2017 Adopted Budget report.

With more than 900 grant programs offered by 26 federal grant-making agencies, the U.S. government has often played a role in city projects. City officials, regardless of the administration in Washington, D.C., track appropriations processes.

“We always watch it closely because it sets the tone for how Congress will meet the different spending priorities of the president,” said Jane Abraham, the city’s community and government affairs manager. “A lot of what we are looking at is the programs.”

“We are behind,” Abraham explained. “It is not really possible to keep up with all the maintenance needs. We would really like to see it and get caught up on maintaining our infrastructure.”

A key part of a federal infrastructure project might be the relationship between the federal government and states.

States can often be the middleman between cities and the federal government. Abraham and others at City Hall would like to see provisions for cities to participate.

Police officers give out free gunlocks to city residents as part of a Department of Justice program.

Additionally, the city has been awarded nine Environmental Protection Agency Brownfield grants, which go toward cleanup and redevelopment of abandoned industrial sites. One grant helped cleanup of asbestos during Skirvin Hotel redevelopment. Another was applied to cleanup efforts for a future Downtown Park, a MAPS 3 project. 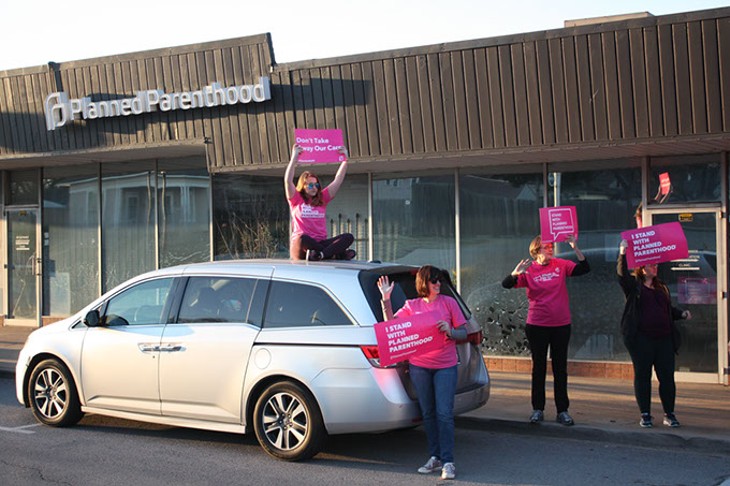 Aaron Wilder, Oklahoma organizer of Planned Parenthood Great Plains Votes, oversaw the rally organized in 24 hours. The large turnout matched the response he has witnessed since the November election. During his campaign, Trump joined other Republicans in vowing to end federal funding for the national nonprofit, sounding an alarm among the supporters of the reproductive health care provider.

“The calls and emails started immediately after Election Day, and those calls and emails never stopped,” Wilder said. “People wanted to help defend [Planned Parenthood]. We’ve processed more than 1,000 volunteer applications since the election, and that’s a huge increase.”

AHCA draft legislation calls for offering individuals refundable tax credits to purchase health insurance. It also would restructure the Medicaid program, which is funded jointly by federal and state governments to help low-income citizens and individuals with disabilities. The legislation has received mixed reviews, as experts claim it will be harder for low-income people to obtain health coverage.

The legislation will likely take on many forms before any floor vote, but with many Republican lawmakers determined to strip Planned Parenthood of federal funding, the organization sees a long fight ahead.

For Planned Parenthood, politics should not shame patients and supporters into silence about their experiences, Wilder explained. People’s experiences are crucial.

“The most important thing you can do is tell your story,” Wilder said. “Right now is the time to come out of the shadows and talk about the care that we need. We need to put a real face to what politicians are attempting to do.”

On the campaign trail, Trump made specific environment and climate promises, from lifting fossil fuels development restrictions and canceling the Paris climate change agreement to dismantling the Environmental Protection Agency.

The promises were alarming to environmentalists and scientists, including Sierra Club Oklahoma chapter director Johnson Bridgwater.

“There is pretty strong consensus that people have never seen such a concerted effort to go after environmental issues the way Trump is doing,” he said. “There is a great deal for potential harm, but it is not something he can do via executive order.”

Any efforts to reverse environmental regulation must go through the lengthy rulemaking process, which doesn’t guarantee any certain outcome.

That’s why when an executive order was signed concerning the Clean Water Rule, an EPA regulation to clarify which streams and wetlands fall under federal clean water protections, it gave new EPA administrator Scott Pruitt authority to begin the federal rulemaking process. The former Oklahoma attorney general must replace regulations with new versions and define them in court, a long process with an uncertain outcome.

In recent years, environmental rhetoric reveals that clean air and water and a healthy environment are seen as partisan political issues when, in reality, the EPA and its legislation has long enjoyed support from both sides of the aisle. Environmental protections as “job-killers” is false narrative, said Bridgwater, who advocates for further development of the renewable energy industry for growing the economy.

“They are trying to create and turn citizens against the environment and environmentalism, which troubles me more than anything,” he said. “Sadly, I don’t see that getting better soon. I would ask people to actually look at the economics of renewable energy versus the rhetoric. Anyone who is studying this sees the clear facts; you can absolutely have a clean environment, pursue renewable energy and attack climate change without killing the economy.”

print headline: Local impact, In the early weeks of our country’s new administration, metro leaders and communities consider the potential consequences of federal policies and priorities.