OKC’s Santas bring the legend to life and celebrate the reason for the season. 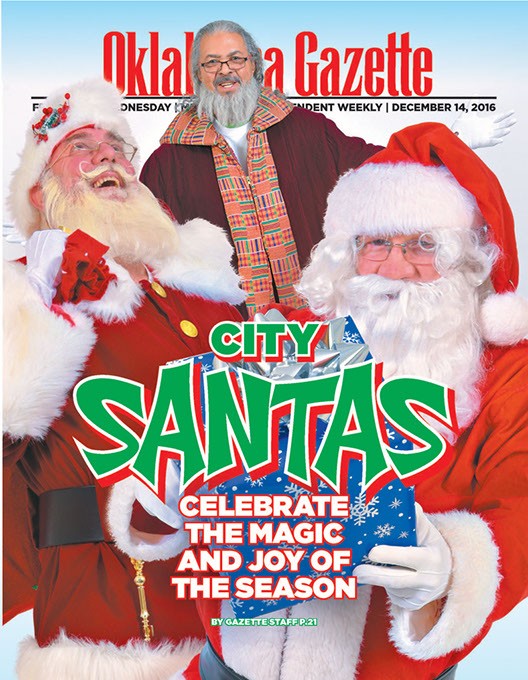 Santa goes by many names — Santa Claus, Saint Nick, Kris Kringle, Father Christmas, Joulupukki, Kanakaloka, Babbo Natale, Julenissen, Papa Noel and others. The popular version of Santa we know and love today has a long history that began hundreds of years ago. Real-life Turkish samaritan Saint Nicholas of Myra, Turkey; the legend of Sinterklaas from the Netherlands and Belgium; Germanic Yuletide celebrations; and England’s Father Christmas added to the mysterious figure that later became the jolly, bearded icon we know today.

The poem “A Visit from St. Nicholas” (now known as “The Night Before Christmas”) and an 1881 Harper’s Weekly cartoon by Thomas Nast cemented modern visions of a white-bearded man in a red suit who checks his list of naughty and nice, flies through the sky in a sleigh pulled by reindeer and sneaks down chimneys to leave presents and eat cookies.

Oklahoma City is full of Santas of all races, ethnicities and beard lengths — some even represent Santa year-round. These cheerful characters don the costume of the Santa they admire, patiently listen to the holiday wishes of children all over the city, radiate seasonal cheer and remind us all what the season is really about: kindness, love and family. We introduce you to three of these special men. 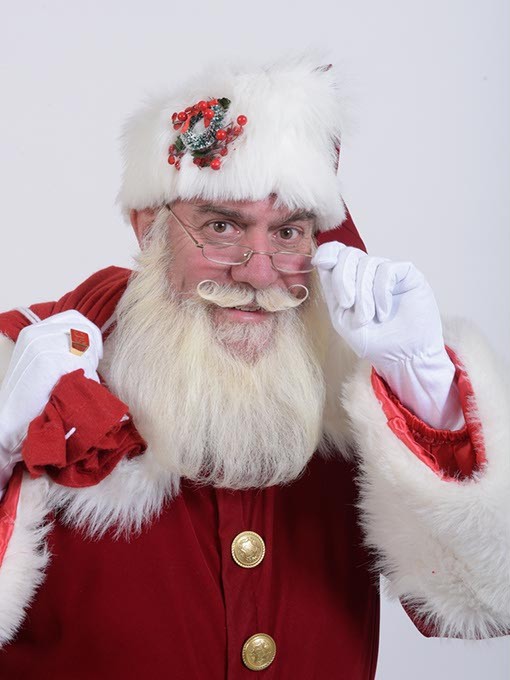 While there is plenty of beard envy among members, Turner said there is no sense of elitism over Santa representatives who strap on their beards.

“A lot of the adults are judgmental that way,” Turner said, “but to a child, they just see Santa.”

And that’s just how it should be.

Turner, who also works as a photographer for KWTV News 9, had just finished participating in No-Shave November one year and was debating whether or not he should keep his new lengthy beard when his wife suggested he play Santa for their grandchildren. He looked online for a good suit, and when he found out how much one would cost him, he knew it would take more than a one-time use to justify the purchase.

That was when Turner committed to his double life as Kris Kringle.

In the beginning, he donned the red suit to entertain people at businesses and private gigs, but as he has become a more popular Santa representative, many of his jobs now are for photo shoots and larger corporate events.

The role keeps him busy year-round. He attended a Santa workshop with his wife this summer and regularly books appearances sometimes more than a year in advance.

Turner found out about the brotherhood online. In addition to meeting fellow Real Bearded Santas, IBRBS gives members access to reduced-cost background checks and discounted insurance policies. The brotherhood’s Oklahoma chapter includes 30 Santas from across the state, one of which does not even have a natural beard.

Santas who wear “traditional,” or artificial, beards are not necessarily inferior to their natural counterparts. Turner said the traditionally bearded Oklahoma member wears a luxurious replica worth four figures.

“And it outshines mine, too,” Turner said.

Turner’s beard is about 10 inches long. His hair is not naturally white, so he routinely bleaches the growth. Straighteners, conditioners and beard oils keep the fluff holly and jolly.

“I have more hair-care products than my wife,” he admitted.

Turner doesn’t just wear Santa’s heavy boots; he walks in them. He tries all year to look at the world through the eyes of St. Nicholas while upholding three key tenets to keeping a Christmas heart: love, joy and happiness.

“I look like the symbol that represents those three things,” he said. “If you remember that, it helps you through some pretty bad times and it allows you to share that with others, and hopefully they get to experience that at the same time.” 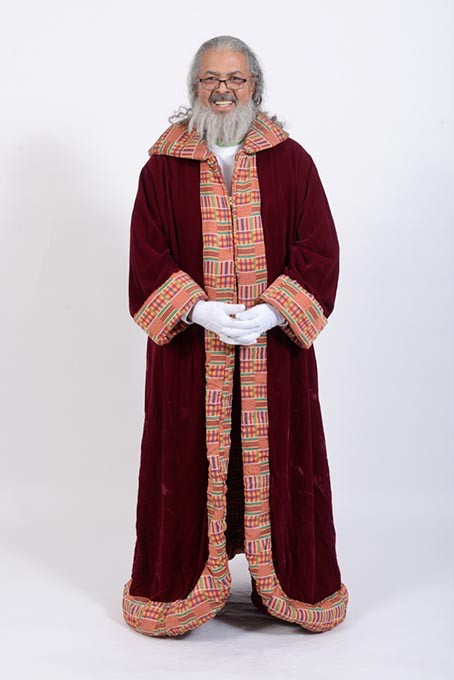 Richard Palmer began his career as Santa Claus in the late ’80s at Ralph Ellison Library, 2000 NE 23rd St., after librarian Betty Germany asked him to put on the costume.

“I agreed when she asked me, but I thought it was only going to be the one time,” the 76-year-old said. “The next year, I wasn’t asked; I was told.”

Palmer never became a mall Santa Claus or worked in a retail store, but he said he has appeared at many libraries over the years.

While most kids don’t seem to even notice Palmer as black — he’s just Santa, after all — many parents do tell him they’re put at ease and enjoy meeting him.

“For years, we’ve been talking about seeing someone that looks like us,” he said.

In 30 years of representing Santa, Palmer said adults have made the mistake of assuming Santa Claus should be white — and told him so — two or three times. Palmer said the children’s excitement-filled reactions are why he started portraying Santa and what has continued to inspire him to do it for decades.

Use the words “art” or “craft” to describe what Palmer does and he’ll laugh a jolly laugh, but it’s clear he has put thought into the ethical boundaries of his Santa. For starters, he’s down-to-earth (literally) and fair, and he imparts hope.

“I’m not the come-down-the-chimney Santa Claus; I don’t have reindeer,” he said. “What I talk to the kids about, I say, ‘I can’t make a promise of what you’ll get, but I’ll work hard.’”

It’s easy to demure when a child asks for a big gift like a life-size personal robot or a mini Ferrari, but he also takes care to respect kids and parents when they make smaller requests. His role as an intergenerational intermediary is a great responsibility.

“I never make the promise,” Palmer said. “[But like every hard-and-fast rule,] there are exceptions. There are times when the parent hears what the child is asking for and may nod at me. I pay attention to that.”

Because, every once in a while, some parents can have a pretty good idea of what’s happening with Santa and Mrs. Claus up at the North Pole.

Palmer admitted there’s another conundrum to being Santa: The version of Christmas celebrated today is one that’s too often driven by economics.

“I do believe if there wasn’t a Christmas, we’d have to invent one,” he said. “We do it to keep our economy moving. But now, it’s worked too well and we have to rent storage units to keep the stuff we don’t have room for.”

We told you this Santa is down-to-earth. That’s why he takes the few minutes to visit with his young guests and remind them that the true meaning of Christmas isn’t about receiving toys. The most valuable gifts are the ones already around you.

“I’m not devout,” Palmer said. “Of course it’s about the family!”

As a family man himself, Palmer has some advice for parents when they take the kids to visit Santa.

“The young ones, the 2- and 4-year-olds, they get antsy,” he jovially said. “You should sit on Santa’s lap first to show them it’s OK.”

With a love for making children smile, an infectious smile and the ability to bellow ho, ho, ho on command, La Tremenda 1460 AM KZUE radio host Rubén Espinosa portrays the quintessential Christmas character each holiday season.

This time of year, listeners of the Hispanic radio station know Santa Claus occasionally makes a special appearance on-air, appealing to boys and girls and everyone who believes in the magic of Christmas.

“I say, ‘Aquí está Santa Claus,’” Espinosa said as his eyes went wide and his face lit up to reenact one of his on-air announcements.

Next, Espinosa’s voice lowered with enough depth to shake a bowl full of jelly.

Espinosa sees his role as Santa as a friend to children, one who guides them toward hope, love and peace.

Espinosa’s holiday greetings as the jolly old elf are infused with messages encouraging children to obey their parents and grandparents and work hard in school. He also reminds them that Santa Claus is coming to town and he doesn’t forget any child who believes.

Since 1989, Espinosa has spread cheer and life lessons to the many children who listen to La Tremenda or take part in the radio station’s Navidad en el Barrio, or Christmas in the Neighborhood. The annual event is an important part of the Oklahoma City Hispanic community’s holiday tradition. Families line up to meet Santa Claus, sing along to holiday carols and watch live, family-oriented performances.

As in Mexico, volunteers hand out bags of goodies filled with peanuts and candies. Thousands of wrapped Christmas presents are lined against the walls, ready to be handed out to children.

“I see all the kids smile,” Espinosa said. “For some families with six or seven kids, they might not have any means for buying gifts. I am very happy to look out at all the families and see the toys in the hands of each of the kids.”

“I see the kids as my own,” said Galvan, who sometimes dresses as Mrs. Claus. Galvan, along with many of the radio station’s advertisers, donate the toys. “A toy can dry a child’s tears away.”

To Espinosa, Navidad en el Barrio embodies the season of giving. Like a proud grandparent, he scrolled through his cell phone to revisit images and videos taken at past events. With a smile, Espinosa explained some children finish their visits with Santa with a hug. He has witnessed children, overcome with happiness, cry when they are handed a gift.

Print Headline: City Santas, OKC’s Santas bring the legend to life and celebrate the reason for the season.