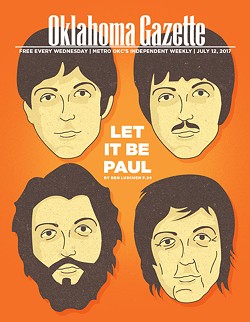 Music has a wonderful way of impacting our lives — even in ways we never expect. As thousands of fans can likely attest, no band in history has influenced as many hearts and minds as The Beatles.

Paul McCartney, the Liverpool legend, iconic vocalist, bassist and songwriter or co-writer of many of the Fab Four’s most cherished hits, in addition to decades of music he has since recorded with Wings and as a solo artist, performs Monday at Chesapeake Arena, 100 W. Reno Ave., as part of his One on One U.S. tour. McCartney’s last Oklahoma City concert was in 2002, when the venue was still called the Ford Center and seven years before the Thunder played its first NBA game for Oklahoma City.

McCartney’s show comes at a time when The Beatles, the world’s highest-selling music act of all time, have once again reemerged in popular music discussion (if they ever left at all). Enthusiasts everywhere recently took time to observe the 50th anniversary of Sgt. Pepper’s Lonely Hearts Club Band, the band’s landmark eighth studio album, released June 2, 1967 in the United States.

Oklahoma Gazette recently spoke with several local faithful followers of McCartney, Wings and The Beatles, who shared their impact in their own words. 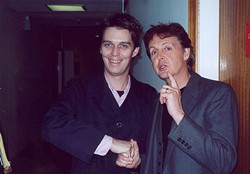 The Flaming Lips’ Beatles fandom has never been a secret. The Oklahoma City art-rock act released its 2014 project With a Little Help from My Fwends as a reimagining of Sgt. Pepper’s. The album featured a roster of musicians and entertainer friends as band co-founder Wayne Coyne and the Lips performed the classic track list, which includes “Lucy in the Sky with Diamonds” and “Lovely Rita,” among others.

Lips multi-instrumentalist Steven Drozd recalls meeting McCartney for the first time around the 1999 release of The Soft Bulletin — widely considered the band’s international breakthrough — on the set of a television show.

“We were on the Jools Holland show (Later… with Jools Holland), which is like a variety show in England, and there are four or five different artists on each show. The night we did that, one of the artists was Paul McCartney, and he had [guitarist, vocalist and former Pink Floyd member] David Gilmour playing with him. We were just like, ‘Holy shit! Paul McCartney and David Gilmour in the same room!’

“So, we got finished — I think we did ‘Waitin’ for a Superman’ and ‘Race for the Prize’ — and the way it was set up is that whoever was the next artist set to play would be set up across the soundstage and they would be ready to perform their bit.

“[McCartney] was up next after us, so when we got finished playing, I started playing ‘Maybe I’m Amazed’ on the piano and kind of waved at him, and he did a little nod back. They got done, and then a couple of hours later, we were out in the hallway and he comes walking through. … I’m like, ‘Hi. I’m Steven from the Flaming Lips and just wanted to tell you what your music means to me. I was playing ‘Maybe I’m Amazed’ hoping you would come over and jam with us.’

“Someone was there with a camera, so I said, ‘Can I take a picture?’ and he said, ‘I’d love to take a picture.’ There’s a picture of him and me, and I look like a crazy 12-year-old kid with a big smile on my face. He’s pointing his finger — you can tell he’s probably pontificating about something.”

Drozd said anyone attending McCartney’s Monday concert at the ’Peake might be getting one of their last glimpses at music history.

“My wife [Becky] and I were talking about going to see the show, and I was like, ‘I don’t know if I really want to go see it.’ I know there’s probably going to be some storytelling involved, and a lot of the songs won’t end up sounding like the way I would want them to sound because I’m kind of a shit that way.

“She was like, ‘You know, it’s the only chance for our kids to see a living Beatle,’ and she was right. We’re going to go, and we’re going to take our kids with us.”

The Beatles’ music might be ubiquitous, but for KFOR reporter Lacey Lett, it was literally unavoidable. Her father Jim Lett earned a living portraying guitarist and vocalist George Harrison in several Beatles tribute bands, including Las Vegas-based Yesterday, which toured nationally, and British Invasion, which recently reunited after a hiatus.

“I actually hated The Beatles when I was young. When I was in the first grade, all of my friends had no idea who The Beatles were — I was so embarrassed that I did. My dad would have practice every Wednesday, and you could hear all The Beatles music in our garage/studio that he built. I grew up at a very early age knowing all of the songs, and it was mostly the early Beatles that my dad would play early on.

“That was my initial exposure to it, and it wasn’t until I was in high school where I was like, ‘OK; I’m just going to listen to them and see what I think.’ I put in Rubber Soul, and I ended up really falling in love. From that point forward, I ended up loving The Beatles and did a Beatles history class at OU. It was actually the class that got me into the honors college — random, I know. I would tutor some of my friends because I knew all this stuff. I could literally just ask my dad because he knows all of this stuff — he knows pretty much everything about The Beatles.”

Lett briefly moved to New York City in 2008 to work for VH1 and MTV. At that time, she worked on a VH1 Classic documentary about the creation of 2009 video game The Beatles: Rock Band. Through the process, she got to know Dhani Harrison, the son of the musician her father emulated during his own career.

Lett is excited to see McCartney in Oklahoma with her parents beside her. She last saw him perform in 2009 at New York’s Citi Field. (The performance was recorded as the live album Good Evening New York City.)

“Even at that time, I regretted not going to the show in Oklahoma City in 2002, because who knew when he was ever going to come back? I mean, look, we’re looking at 15 years later. I didn’t get to go, and my parents went, and I regretted it. Whenever I found out he was coming this time, I talked to my fiancé about it, and … we surprised my parents with some tickets and we’re going to get to go and live that bucket list item.” 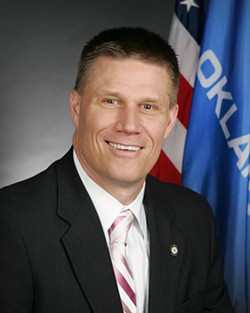 Todd Thomsen remembers perusing the internet in early 2015 after the release of rapper Kanye West’s single “Only One” featuring McCartney and reading the many comments saying how nice it was that the hip-hop superstar extended a helping hand to the aging musician’s career (in jest and ignorantly genuine — Forbes estimates his earnings so far this year at $54 million).

The Ada Republican said that while the English songsmith’s influence might be unknown to some, McCartney’s impact is forever cherished on a personal level.

“I love music. A good song can take me back to a moment in time, bringing the sights, sounds and feelings back to life. For me, music has formed a soundtrack to my life and from elementary through high school, my personal soundtrack contained songs from The Beatles — both as a band and from its individuals.

“From the straightforward simplicity of their early hits like ‘Love Me Do’ and ‘She Loves You’ to the more complex ‘Band on the Run’ by Paul and Wings, there has always been something about their songs that resonates. It's pretty cool to have Paul McCartney in Oklahoma on the 50th anniversary of the Sgt. Pepper’s album.”

Outside politics, Thomsen is probably best recognized for his time as a University of Oklahoma football team punter and kicker, and he was part of the squad’s 1985 national championship team. The Oklahoma Fellowship of Christian Athletes regional coordinator said that while his connection to athletics is well known, most are unaware of his family’s deeply held interest in music.

“Our seasons of the year were football, basketball, baseball and so on, but what might surprise people is we were also a very musical family. My parents introduced me to all genres of music and were always open to the current music I was listening to — everything from Southern gospel, doo-wop, Motown R&B, rock ’n’ roll and classic county — it all played in our house and in our cars.” 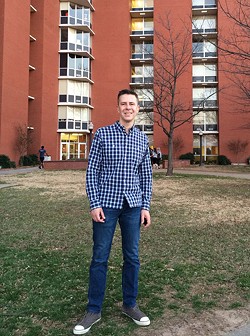 Despite being only 5 years old in 1970 when The Beatles split and growing up with parents who disliked the band, George Lang felt an attachment to the Fab Four from a young age. Though not intimately aware of the band’s catalogue and world-spanning popularity, he loved watching the former members on television and hearing their solo works on the radio.

Early on, Lang also formed a sentimental bond to John, Paul, George and Ringo through reruns of the band’s self-titled ’60s cartoon series. He carried that affection into his teenage years.

“The morning after John Lennon was killed [in December 1980], I came downstairs for breakfast, and my mom told me the news.

“You kind of have to know my mom to understand my reaction. I just kind of shrugged because if I expressed any sadness or admiration, it might trigger a seemingly interminable rant against the man who impacted the lives of millions if not billions of people. On the bus to school, KMOD-FM in Tulsa played Beatles and Lennon songs nonstop, and it was all we talked about when we got to class that day.

“Most of the teachers were glassy-eyed all day, and when he got back on the bus, we heard more Beatles.”

A year after Lennon’s death, Lang took his first true dive into The Beatles’ catalogue. He purchased the Sgt. Pepper’s album, placed the needle on the record and then sat mesmerized at the sound that he said changed his life forever.

“I truly felt at the time as if I had consumed a drug, and in a sense, I had. When I hear people talk about their experiences on DMT or ayahuasca and how it seems to clear up the questions they have about their life, that’s kind of how I felt when I heard Sgt. Pepper’s for the first time.

“When someone is inexperienced with music, they can only appreciate it if it obeys certain rules: It has to be fun, it has to be sung and performed in a way that most people accept as cogent and pleasing, it has to go verse-chorus-verse-bridge-verse-chorus-repeat, all of that. Just hearing ‘Within You Without You’ and the final crescendo to ‘A Day in the Life’ forced me to reevaluate and discard that standard. …

“I began to expect more out of music than mere precision — it had to challenge me. I started reading about music seriously, which led to writing about music seriously. I could not have appreciated punk, David Bowie, The Smiths, Brian Eno, Todd Rundgren, The Flaming Lips, MGMT, Arcade Fire, Kendrick Lamar, Radiohead, St. Vincent or even Miles Davis without first having listened to Sgt. Pepper’s Lonely Hearts Club Band. It is one of the gospels of my faith.”