by Ben Luschen and Laura Eastes 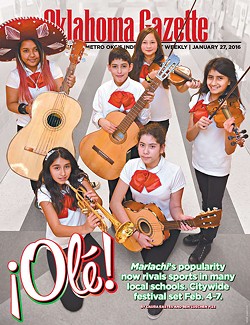 As the conductor, Osborn sets the tempo and shapes the sound of the 17-member fifth- and sixth-grade ensemble, which features string and brass instruments. Since 2004, the music educator has introduced countless students to instruments, trained them to read music and stressed the importance of practice. In many ways, teaching mariachi is identical to school orchestra or band programs.

“How I see it, it’s a style,” Osborn said. “I teach the kids how to play violin the way I would if they were in an orchestra. I teach the trumpet player to play trumpet as if they were in a band. The instrumentation is specific to mariachi, but the techniques are the same as anything else.”

Yet the traditional Mexican music strikes a chord with Hispanic students, their parents and the Hispanic communities of south Oklahoma City. The program has continued to grow in student participation and parent support since its full implementation in 2005.

OKC school board member Gloria Torres views mariachi as a unique opportunity for pupils at Fillmore, Capitol Hill and Adams elementary schools, which are located in largely Hispanic neighborhoods. Through the culturally relevant music, children discover a sense of pride in the heritage of their families and develop positive identities.

“We try to build strong children, and one of the key components to building strong students is allowing them to identify and have pride in who they are,” said Torres, who represents District 6 in south OKC. “Knowing who you are and where you come from builds that character.”

The pride is evident on the faces of parents and grandparents as mariachi students perform in auditoriums and at community events and parades, said Susan Martin, Fillmore principal.

“My (school) parents are like any other parents,” Martin said. “They want more than they had, and they want to give them every opportunity.”

Fifth-grader David Salomon said he’s thankful for the mariachi program because it’s not offered in every school. Salomon, who is bilingual, joined the band as a fourth-grader.

“It is part of our roots,” Salomon said, “because a lot of our moms and dads come from Mexico.”

A dozen years ago, Fillmore and Capitol Hill elementary schools created mariachi classes following cable network VH1’s Save the Music Foundation grant. The foundation works to restore music education in public schools and raise awareness of the positive impact fine arts have on students. Guitarróns, vihuelas, trumpets and violins were purchased with the funds.

“We were fortunate we got it,” said Martin, who was the principal at the time. “Our culture was turning at the time. For the kids that were not Hispanic, they still sang and learned right along.”

Oklahoma City Public Schools reports that 48 percent of its 46,500 pupils are Hispanic. A decade ago, Osborn said, student demographics were much different. A 2005 photo of Fillmore mariachi students with former Oklahoma Lt. Gov. Jari Askins hangs near Osborn’s desk. He pointed out that only a handful of the youths were of Hispanic heritage.

“That was pretty representative of the school when we started,” Osborn said when viewing the photo. “It has completely changed, and having this program here has worked out really well.”

Osborn was hired by the district to teach at U.S. Grant High School and Fillmore in January 2014. He initially thought he was creating an elementary band, but that changed when the instruments arrived. He immersed himself in the mariachi genre and received help from community leader Robert Ruiz, marketing manager at Plaza Mayor at the Crossroads.

In the early years, around 20 students participated in the Fillmore program. Now, about 60 children in grades four through six take part. 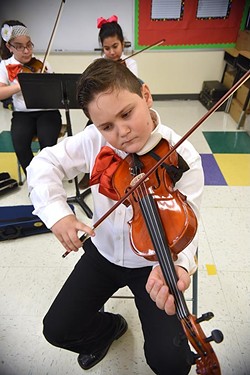 Ruiz said someone would be hard-pressed to find similar programs anywhere in Mexico.

Typically, children learn mariachi lírico listening and watching family members or those around them. These are the working, family mariachis.

“Mariachi in Mexico is so ubiquitous, it’s kind of like the tortilla,” Ruiz said. “Mariachis are everywhere.”

In the United States, children are not constantly exposed to these types of influences and must reach a lot further for cultural identity — thus the need for an artificial mariachi upbringing in the school system.

Students learning mariachi are exposed to more musical components than those in band or orchestra. In addition to the instrumental side to learning mariachi, Ruiz said there are also the elements of singing and drama.

Mariachi music is very much tied to Mexico’s folkloric tradition. While a welcome addition to any meal, it was not invented to be played solely over a table at a Mexican restaurant. Ruiz said there is a soul and art to the music that many Americans will never see.

Mexico’s virtuoso mariachis, like those invited to the festival, are high-level, classically trained outfits that Ruiz said give the music its vibrant life. Their technical abilities are on a symphonic level, much higher than smaller, working mariachis.

But that’s not to say family mariachis do not contribute to the life of the culture; they are the reason the music is so strongly linked to the culture.

“They’re kind of the bustler of the mariachi music,” Ruiz said. “They’re the ones that you can find on any given weekday or weekend on the corner. You can just go pick one up and take them to your party, you know?”

Growing up in San Antonio, Ruiz said he was always surrounded by links to his culture and history. The city once belonged to Mexico. Buildings, missions and churches still stand as a reminder of his heritage.

In Oklahoma City, with a far younger Hispanic community, those longstanding links to the past are nowhere to be found. Ruiz hopes places like Plaza Mayor will help mature the community and provide a home for their culturally relevant arts.

“That’s why we feel it’s so important for us to [support OKCPS mariachis] — because part of the success of the community is not only going to be economic development, access to health care and access to opportunity, but it’s also that cultural element that’s so important to the richness of their lives,” he said. 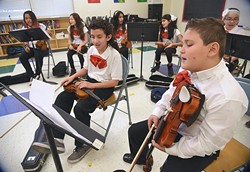 Like fine arts programs across the country, the OKCPS mariachi program’s future depends heavily on funding. While the school still uses instruments from the VH1 grant, contest entries and travel costs for music contests are annual expenses.

For example, students will compete in a contest in Missouri in May. The school has paid the entry fee, but the charter bus service requires raising $1,500.

Right now, they are selling Fillmore coffee mugs and small monetary donations are rolling in.

“I don’t know if we will be able to go this year for the simple fact that we don’t have the money,” Martin said.

Osborn’s concerns also center on opportunities. Right now, there is no program at the secondary level. Those who wish to continue after sixth grade must look for options outside of OKCPS.

“Some of the middle schools have band or orchestra, and some have guitar programs, but none have mariachi,” Osborn said. “I do have some former students who play in mariachis through their families.”

Through the help of community and school leaders, the Anita Martinez Mariachi Festival, Feb. 4-7, aspires to keep the music playing at OKCPS.

The woman honored by the namesake festival was also a lover of food and fashion, but music — especially as it related to her Mexican culture — always held a special place in her heart.

Martinez died last year, but her granddaughter, Jessica Martinez-Brooks, Oklahoma City Community College’s director of community outreach and education, plays a role in organizing the event that carries the legacy she left behind. Ruiz also is involved.

“She was consistently a part of many different community organizations and projects,” Martinez-Brooks said. “She was a pillar.”

An earlier incarnation of the event was attempted in 2006. That year, organizers held a big festival but followed it up with a smaller one in 2007. By the next year, the concept seemed to have fallen by the wayside.

The Anita Martinez Mariachi Festival hopes to revitalize that effort with a refocused goal to raise money for the expansion of school mariachi programs. All funds from the festival will benefit the program through The Foundation for Oklahoma City Public Schools.

“I think my grandma was one of the original people educating the generations and wanting them to do generational activities together,” Martinez-Brooks said. “Mariachi music, I think, is an important way that we bridge the gap from our older generations to our newer and younger generations.”

Aside from the school efforts, however, she said the festival’s goal is to provide a positive cultural experience for the community.

Mariachi Los Camperos plays Feb. 4 at Edmond’s Armstrong Auditorium in Edmond. Los Camperos is a Grammy-winning ensemble from Los Angeles that has been around for half a century. It frequently records under Smithsonian Institution’s independent record label Smithsonian Folkways.

A free concert Feb. 7 caps the festival on the Michael Brooks-Jiminez Stage at Plaza Mayor. Mexican singer Lorenzo de Monteclaro performs with Mariachi Orgullo de América, Oklahoma’s largest mariachi, after a full afternoon of playing from a variety of other mariachis. Though the event is free, there is paid VIP seating.

Martinez-Brooks said fundraising has been one of the bigger obstacles for organizers to climb in year one of the new and improved festival. Some have come to the forefront, but there is a need for community leaders — leaders like Anita Martinez — to step forward and champion the cause.

“With the economy the way it is, it is difficult,” Martinez-Brooks said. “I think a lot of people, and particularly the people who have already contributed thus far, really do respect the fact that we’re trying to get this festival up and running.”

Student Clemente Sandoval pointed to his teacher’s desk when talking about the children who built the music program. Trophies with musical notes and award certificates split time between Fillmore’s office and the mariachi classroom.

At Fillmore, the program has a strong reputation among students for building future musicians and school leaders.

“The yellow one, we won that this year,” Sandoval said referring to the winning parade certificate from October’s Fiestas de Las Americas in Capitol Hill.

Sandoval and his fellow fifth-graders described marching down Commerce Street as spectators cheered and danced in the streets.

Months later, the children performed for Gov. Mary Fallin and Santa Claus at the Capitol.

“It takes practice first before you can go on field trips,” said Maria Reyes, a fifth-grader. “It takes dedication.”

“The skills they develop, like any other arts program, help them strengthen their academics,” Torres said. “That’s why we fight to keep arts in our schools. The impact is so much greater.”

Martin sees that impact daily. A majority of mariachi students are members of the student council or participate in honor society. They rarely visit the office to be disciplined.