Oklahoma is perched atop the Native American art world. It has the advantage of being home to many artists of all mediums — past and present — who create work that is authentic, exciting and germane to the Native American experience while embracing its inherent ability to be unconstrained by that same spirit.

Because of fine artists of the past — as well as thoughtful curating by museums and galleries today — neo Native American artists can create work often sought by collectors while helping define and build their own communities.

Raised in Stillwater, Yatika Fields, 34, now travels the U.S. and abroad creating art. Currently, Fields primarily paints murals, but he also works with canvas, black-and-white photography and other mediums and has art in galleries around the globe.

In his work, Fields embraces the abstract and creates dazzling works that come alive with movement and color. With only two years of formal training after high school, he dropped out of a Boston art school and took to the streets to create.

He eschewed both the benefits and limitations of an art education for real-world lessons in graffiti, networking and self-expression.

Both of Fields’ parents are artists, so he grew up learning basic artistic principles and has a natural gift for it. He has traveled the world creating art and said he has met world leaders like President Bill Clinton and the Sultan of Brunei through his work.

“Being an artist means you’re constantly creating no matter what, but you’ve got to have an affinity toward it,” Fields said.

Fields is not just an artist in his work; in his everyday life, he talks with the ease of an artistic mind and the affability of someone who operates at a level of humanity that is often absent in day-to-day interactions. Using cans of spray paint and almost a week of eight- to 10-hour days, Fields recently painted his first large-scale mural — a 125-foot-wide by 11-foot-tall wall — in Oklahoma City for Abraham’s Bail Bonds, 1219 N. Classen Blvd.

“I’m just happy to be alive and have opportunities that allow me to be creative and paint. Especially like bringing a mural to Oklahoma City. It’s something new for people,” Fields said.

“When it comes to murals, these are outdoor things that exist in communities and its all meant to inspire and beautify places. You get to get out and present your work to the public and let it breathe in the open air.”

Fields, who belongs to the Osage, Cherokee and Creek tribes, was painting a mural in Portland, Oregon, when he was selected out of 10 other local OKC artists. He had to apply and interview for the gig before being chosen by a review board.

“We found his piece to have the highest artistic merit, it fit the neighborhood … some of the artists in the community liked the idea that it was abstract, which means it wasn’t really tied to a time or theme,” said Kyle Golding, curator at 1219 Creative, the art gallery responsible for commissioning Fields for the mural. “Among us all, we decided that the idea that we could get Yatika to do this for us would be really beneficial to the space. He’s an Oklahoma artist … and for us to celebrate that is pretty phenomenal,” Golding said.

Anthony Pego, 35, is an OKC-based artist focused on creating and selling handmade jewelry. Having worked as an audio engineer, musician and furniture designer, Pego has produced art of some kind — primarily photography and painting — for most of his life.

Under his business moniker Boo Science, based on his admiration of science and Dr. Seuss, Pego uses upcycled materials as well as pulverized and gutted coins to form his medallion necklaces. He also places a centerpiece — rose rocks, gemstones, trinkets, pieces of wood and even Oklahoma red dirt — in the coin and fills them with a melted polymer resin that resembles hard glass. Pego said he plans to eventually cast precious metals in his jewelry.

With art in approximately five stores around the metro and Enid, Pego hopes to expand to having his own storefront, but until then, you can find Boo Science online on Etsy and any number of social media sites.

Being Native American influences Pego’s art in numerous ways, and he said elements associated with his people also make for beautiful jewelry centerpieces.

“I’m from the Saginaw-Chippewa tribe, and they’re up in Michigan, where there are some old copper mines that were mined by the natives before anybody else came in. They were pretty much bled dry actually … the copper is the one thing that I feel a connection with on my pieces through my tribe,” Pego said. “And I love the striking contrast between the Oklahoma red dirt color and turquoise. It pops, so I use that a lot.”

J. Nicole Nami-A-Piah, 32, is a Norman-based artist who has recently gained more recognition for her paintings. She has exhibits at Jacobson House Gallery in Norman, Paseo Artworks in OKC and Southern Plains Museum in Anadarko and also has sold in markets in Sante Fe, New Mexico.

For Nami-A-Piah, painting provides a powerful connection to her culture that she didn’t feel in her youth. Painting vibrant images of historical Native Americans, from Jim Thorpe to Chief White Wolf and Geronimo, Nami-A-Piah also uses American Indian mythology, as well as Native American women, who have historically been written about as an afterthought compared to their male counterparts, as inspiration.

“I remember looking at old Indian photos and seeing the men like the chiefs and warriors and you knew who they were. You knew their names. But the women, their names are unknown. It made me mad,” she said.

“These women were warriors too. They fought right alongside the men. They endured the same things that the men did. So, I want to honor them and [tell a story that history has left out]. Even though I don’t know their names … I’m honoring them.”

Nami-A-Piah, a Comanche Kiowa American Indian, paints the faces of her subjects in a pale gray, with deep splashes of color incorporated in and around them and heavy black lines throughout the pieces. She said the colors represent her emotions and the present, while black and gray represent the past.

“[Painting is] therapeutic to me. At one point, when I was younger, I was ashamed of being Indian and I wanted to be other things except Indian,” she said. “I didn’t feel proud. Now that I’m older and have gone through some ceremonies and been more involved with my language, it’s made me proud to be native.” 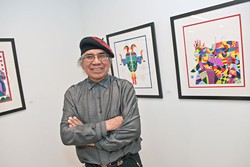 If these young artists are trailblazers, then Benjamin Harjo Jr. is a key local figure paving those trails into roads and showing younger generations the way.

A Seminole and Absentee-Shawnee artist based in OKC, Harjo studied at the Institute of American Indian Arts in Santa Fe, New Mexico, and earned his bachelor’s degree in fine arts from Oklahoma State University.

Harjo is the recipient of numerous awards and recognitions and remembers when Native art wasn’t as widely accepted as it is today and there were few places for Native artists to hold art shows.

“I used to, in the early days, look for art shows, and when we started out doing them, they were in churches or malls or any place we could develop our art,” Harjo said. “There were very few galleries, very few museums, hosting Native American art shows.”

Harjo said that because of pioneers before him, avenues for other artists to exhibit their work have widened.

Early in his career, Harjo and the artists around him went door-to-door to show and sell their art or trade it for gas or groceries. For Harjo, now 69, those days are long past.

He has produced art professionally for almost 30 years and has work displayed all over the United States, including at the Smithsonian Institution.

Print headline: Aboriginal art, Native American art has transformed over the years, and current local artists blur the lines between tradition and contemporary even further.

Art has been important in North America since humans breached the landmass more than 12,000 years ago and carved a rendering of a wooly mammoth in a mammoth bone.

At the Cooper Bison Kill site in Harper County, archeologists found an ancient bison skull painted with a red zigzag, it is the oldest known painted object in North America, dating to around 10,200 B.C.E., experts say.

It is believed that painting these skulls was part of a hunting ritual used to bring Paleo-Indian hunters good luck. It worked, resulting in approximately 35 buffalo kills in one hunt.

Before the 1950s, Native American art was largely a one-dimensional, representational genre depicting aspects of traditional Native American life. Tribal art didn’t just include paintings, it encompassed other mediums like pottery, basketry and beadwork. Because of this — the paint styles and the crafting elements of beadwork and basketry — and the collective disenfranchisement of native people (Native Americans were not allowed U.S. citizenship until 1924) Native art suffered and almost squandered away in oblivion, not being allowed a place among other art in galleries and museums.

Then came the rebels and revolutionaries of the art world; the pioneers who blended elements of both traditional tribal art and contemporary influences into work that demanded to be viewed for what it was: something daring and something to behold alongside mainstream work. This art was illustrative of indigenous sentience, yet incorporated many genres and utilized available technologies to produce relevant pieces without the constraints of fitting into a any predefined expectations.

In the first half of the 20th Century, the Kiowa Five (sometimes called the Kiowa Six) — Oklahomans Spencer Asah, James Auchiah, Jack Hokeah, Stephen Mopope, Lois Smoky and Monroe Tsatoke — readied the art world by spearheading the movement of Native American art from one-dimensional paintings and crafts into new territory.

Where they left off, new artists like Oscar Howe demanded respect. First, the art world resisted Howe and told him his art was too contemporary to be Indian art. Many fellow Native Americans also believed Howe’s work was too trendy to be considered native art. Yet, in Tulsa, he fought to have his art seen and viewed as Native American art at the Philbrook Museum of Art. Eventually, he won. Howe’s fight allowed Native American’s to express themselves through their work in more artistic ways, and still remain Native American art.

Despite the headway of trailblazers like Howe, the debate over what constitutes Native American art continues, and has resulted in things like the Native American Arts and Craft Act of 1990, which is a “truth in advertising” law that makes it illegal to claim a piece of work is Indian art when it does not meet certain authenticity parameters, like being created by a member of an officially recognized tribe.

“We, collectively, have been having this conversation about what defines Indian Art for decades,” said Christina Burke, curator of Native American and Non-Western Art for the Philbrook, “and it’s not always clear.”