Oklahoma City Restaurant Week is back, and this year, it’s expanded to 10 days to help raise more money for Regional Food Bank of Oklahoma. June 9-18, Oklahoma Gazette and 29 great local restaurants bring diners more than a week of the best in metro cuisine via specialized, specially priced Restaurant Week menus.

For each Restaurant Week lunch ordered, $1 is donated to Regional Food Bank of Oklahoma. For each dinner, $2 is donated to the food bank. Each dollar donated becomes five meals for someone in need.The event makes giving easy and delicious.

1. Check out the insert in this issue or visit okcrestaurantweek.com to learn about participating restaurants and their prix fixe Restaurant Week menus.

2. Once you decide which venues to visit (you’ll likely want to visit more than one), ask your waiter for a Restaurant Week menu.

4. Pick up next week’s Gazette to learn more about how chefs designed their Restaurant Week menus. You can also visit okcrestaurantweek.com for more details.

OKC Restaurant Week participants often have a longstanding commitment to giving back to their communities, which is also part of the reason they’re excited to join in this year’s event.

A Good Egg Dining Group has been a longtime supporter of local charities. But in 2015, the company wanted to go further.

“We decided we wanted to structure a giving program to give back to the city,” said recruitment specialist Lauren Kerby.

“Each one chooses an organization that matters to them,” Kerby said. “Every month, one of our restaurants does a volunteer event.”

The company also began hosting annual pop-up dinners using its built-in talent to help local nonprofits. In August, it held a dinner for 115 guests and raised $8,250 for Positive Tomorrows, which educates homeless children.

“It’s a way to give back to our community while doing what we do best,” she said.

As part of the Turning the Tables on Hunger initiative, Good Egg prepared meals at an event earlier this year and once last year.

In 2016, Lawson created lamb stroganoff with fresh green beans in bacon. This year, he delved into WestTown’s food pantry to create something special: a fruit cup cobbler.

“I make it my mission to work with the products that they are unsure what to do with or how to make it without other ingredients,” he said. “You might think [cobbler] is simple enough, but we were not going to settle for opening canned fruit and pouring crushed cereal over the top.”

He and other volunteers reduced the canning syrup and added Rice Krispies Treats and ginger snaps to pull the vanilla flavor from the marshmallow and baking spices from the ginger snaps.

“We then took crushed bran flakes and dissolved some Rice Krispies Treats to create a granola-style topping,” he explained. “While not something you will likely see on a menu anytime soon, it was a great treat for the clients.”

Good Egg front-of-house staff served the dessert and dinner and even stuck around to help WestTown staff clean up the dining room.

The group plans to continue its regular participation in Turning the Tables dinners.

“Personally, I have a calling to one day give away the food I make,” Lawson said. “Up until I worked with The Homeless Alliance, I always assumed the benefit of having food was enough. … So when the day comes for me to hang my career chef coat up and step into my retirement of not-for-profit cooking, I now know it will be as part of something bigger.” 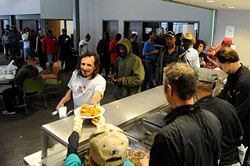 La Brasa and Kong’s Tavern owner and chef James Vu said helping children is a cause near and dear to his heart.

In addition to participating in OKC Restaurant Week, Vu said he has been introduced to several charities through his marketing director.

“After working Taste of OKC together, he invited me to an event at the Chesapeake Boathouse for Little Light Christian School,” he said.

In 2012, the group opened Little Light Christian School to educate and care for children whose parents are incarcerated.

“Meeting the kids and learning what they go through, I needed to help,” Vu said.

The school provides a free education to children in addition to clothes, food, school supplies and transportation.

It also participates in Regional Food Bank of Oklahoma’s Backpack Program, which sends food home with children to eat on weekends.

As the father of a 6-year-old and a 9-year-old, the issue of food insecurity among youths hit Vu hard. It’s also the reason he became involved with Cavett Kids Foundation, which hosts summer camps for children with life-threatening illnesses who might otherwise miss out on the fun.

Vu also knows parents greatly influence the lives of their own children the way his did when they immigrated to the U.S., and too many kids still need help that, despite all their love and effort, parents aren’t always able to provide.