“I just like going out; I like eating and drinking,” he said. “It’s a part of life.”

by Ben Luschen and Greg Elwell

Today’s patrons might not remember, but in the not-so-distant past of 1985, it was illegal to sell liquor by the drink. Laws back then required boozehounds to be members of clubs, bring their own bottle and then pay to have it poured for them. Bars that skirted the law were said to serve “liquor by the wink.”

So it’s not that surrounding states’ bar scenes are so much better; it’s that the Sooner State was the Later State when it came to letting residents enjoy cocktails.

Decades later, the state is still dealing with regressive alcohol laws, but bar businesses are booming and new taverns open at a shocking clip.

How far have we come? 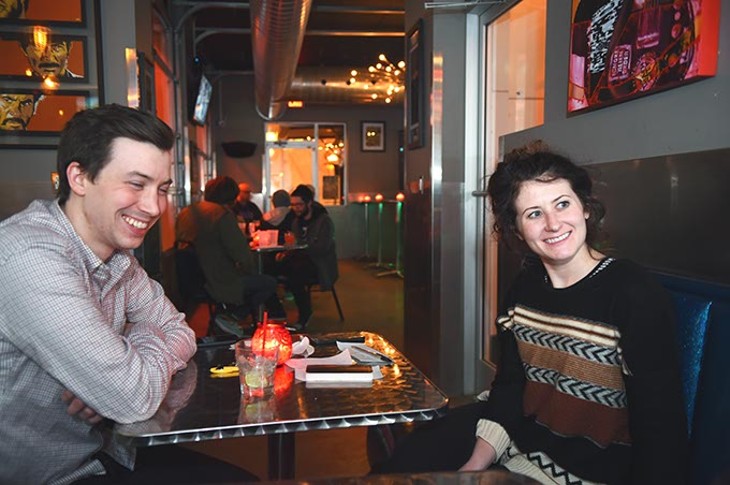 Working in advertising isn’t really like Mad Men, but there is a lot of drinking, Jordan Cram said.

Sitting across from Olivia Reid at The Pump Bar, 2425 N. Walker Ave., he estimated that he’s out for drinks at least three or four times a week.

The same is true for Reid, a social worker who said job stress sends many coworkers out after hours to blow off steam. How much she drinks really depends on what the next day holds.

“I get really bad hangovers, so I try to end it after a drink or two,” she said. “And I know to steer clear of really hoppy beers or dry red wines. But I can have a couple of whiskeys.”

Cram is a little less concerned with intake and more with outtake. On a weekday, he might have as many as four drinks. Weekends are a little looser, with up to six drinks and maybe shots if the occasion calls for it.

“You know that [budget tracking] app, Mint?” he asked. “It scares the hell out of me. I don’t usually worry about what I’m spending up front, but I worry afterward.”

They have a few regular spots, depending on the mood. The Pump always feels like a party, even when it’s half-full. Cram prefers WSKY Lounge for cocktails and Oak & Ore or James E. McNellie’s Public House for beer. He also tries to drink local when he can, favoring Tulsa’s Prairie Artisan Ales and COOP Ale Works beers.

Despite the rise in local liquor distilleries, Reid reaches for a few midrange whiskeys from out of state.

“I’m not trying to get drunk,” she said. “I just want to drink something I’ll enjoy.”

It’s hard to tell how many beers the group has had because the waitresses are so diligent about clearing off barware, but Martin said it’s variety that brought them in.

“It’s about quality over quantity,” he said.

Their jobs as programmers move them across the country, so each new city brings a search for the best drinks and eats. In OKC, Martin loves Oak & Ore. He said other venues don’t have the variety or take the same care with their taps.

Quality costs, though. It’s not uncommon to spend $30-$50 on a night out, and more on the weekends, Pierce said. That’s the price of a social life.

And the price of their nomadic lifestyle means they’ll be saying goodbye to some Oklahoma favorites when they depart. Unless COOP and Anthem Brewing find wider distribution, Martin said he will miss them.

Matt Meinke knows his neighborhood bar is a karaoke spot. He’s just not a karaoke guy.

Singing usually cranks up sometime after 9 p.m. at Nancy’s 57th Street Lighthouse, 5708 N. May Ave., but Meinke doesn’t stick around for a rousing rendition of John Denver’s “Take Me Home, Country Roads.”

What does bring him back, however, is the cooking.

“This is the best chicken-fried steak in town,” he said. “And the gourmet mashed potatoes, they’re serving them in heaven.”

Nancy also runs a catering business, so Meinke said the food is always fresh. He longingly described the bacon, cheese and onions that make the mashed potatoes unbeatable.

Meinke makes his way from home to nearby Nancy’s about twice a week, usually dragging a friend along. Thursday nights are best for him because he doesn’t work Fridays. He has been going there for two or three years.

“As I affectionately say, it’s within staggering distance, so if I have an issue, I can just go home,” he said.

A crowd of regulars gathered around the venue’s long, unique, vintage bar. Meinke estimated that many of the people he shared the space with visited at least three times a week — many of them, unlike himself, are karaoke devotees.

Inside, it’s a bit of a throwback. Dartboards and shuffleboard are popular attractions. So, too, are the jukebox and the cigarette machine.

“It’s kind of like Cheers,” she said. “I could walk out there and name everybody sitting at the bar and half the people in the dining room.”

There are faces she sees every day, diners and drinkers who have been coming to Cousins since the beginning.

Ryan credits the bar’s enduring popularity to good food (she’s insulted when people refer to the menu as “bar food”), fair prices and a staff in which turnover is rare.

“We’ve put a few girls through college, but there are plenty that view this as their home,” she said. “You come in and you’re going to see your favorite bartender or server.”

Even the kitchen, a notoriously volatile place in many businesses, has retained the same staff for nearly 15 years. It cooks up corned beef and turkey breast and cuts fresh fries twice daily.

Since she started in 1990, Ryan has seen a steady evolution of the crowd from overwhelmingly male to a comfortable mix and has seen the venue become a safe environment for everyone. She said the bar also evolves on a nightly basis.

“At lunch, we’re more of a restaurant. Then happy hour is a different age group,” she said. “The later it gets, the younger it gets. It’s unique that way.”

Frequently, John Vu can be found checking out a bar somewhere in the metro area. He’s in the restaurant business, so it passes as research.

With a lack of outdoor activity options in the area that appeal to him, the weekend bar scene is usually the main social outlet for Williams, who has lived in OKC for a couple of years.

Though Williams said he’d like to see all local bars go smoke-free, Vu said there are some venues with atmospheres that should keep that kind of vibe.

Talbert and Vu became friends in high school. Her parents own Hideaway Club, 4418 NW 39th St. They agreed that while the city’s bar scene has significantly improved over the last few years, they’d like more variety in the types of venues — more outdoor and local music venues would be improvements.

“A lot of people are looking for different types of things when they’re looking to go out,” Vu said.

Last year, Vu said, he would go out almost every other night to partake in heavy drinking. He has scaled back since then but still enjoys himself on weekends.

“I just like going out; I like eating and drinking,” he said. “It’s a part of life.”

Plenty of bars have popped up across the metro in the last several years, but Vu said there’s always room for more.

“I feel like it brings the community together,” he said. “In a cheesy way, that’s part of the culture that I was raised in.”

It was Thursday night, and Buddy St. Charles can’t believe how dead it was.

St. Charles, a libertarian, said he wasn’t comfortable providing his real name to a “liberal rag” like Oklahoma Gazette, so he pulled the obviously fake name from thin air.

He was on a date with lady friend Kyle Hunter at O Bar, 1200 N. Walker Ave., located at the top of Ambassador Hotel.

It was a slow night, especially after the packed house the evening prior, for Wine Down Wednesday. Couples mingled on couches and plush leather chairs, sipping glasses of white wine and immaculately mixed cocktails.

When he’s not cooking for her, St. Charles and Hunter go out — not just to drink, but to enjoy the ambiance. It was their first time together at O Bar, but likely not their last.

“This place is awesome,” he said. “[It] rivals bars I’ve been to in Chicago and Boston and California, but there’s no one in here.”

He said the atmosphere at O Bar, as well as the intimate, old-school feel of The R&J Lounge and Supper Club, 320 NW 10th St., are alluring. Oklahomans just don’t realize what they have.

In other cities where he has lived, St. Charles said Thursday nights are “crazy” at bars and restaurants. The drinking culture here is underground, suppressed by antiquated laws that keep liquor stores from selling things like corkscrews.

“I could walk into Kroger’s in Atlanta and they have a better wine selection than I can get in the best liquor stores in Oklahoma City,” he said.