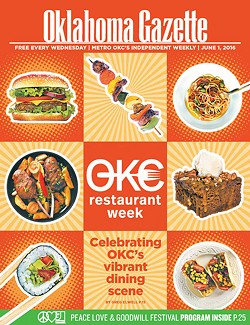 One of the biggest hurdles to trying a new restaurant is a fear of the unknown. We are used to having our food a certain way, even if we don’t realize it. And there’s nothing wrong with that.

No one wants to head out for the evening only to return home hungry, dissatisfied and with less money to boot. It’s why we tend to eat at the same places, sit at the same tables and order the same entrees week in and week out. That’s not necessarily a bad thing. But it’s also kind of boring.

Running June 6-12, Oklahoma City Restaurant Week helps shake up that routine in a way that is easy on the wallet and advantageous to the palate.

“Oklahoma Gazette a downtown restaurant week for several years with great success,” Bleakley explained. “After hearing from restaurants outside of the downtown area that wanted to be part of a restaurant week, Oklahoma Gazette decided to take the plunge and invest the time and resources to make its restaurant week a citywide culinary event. Thanks to this exciting group of participating restaurants along with support from great sponsors this year, it should be fun and rewarding experience for everyone who enjoys dining out.”

Chefs at venues across the city (and into the hinterlands of Edmond and Norman) have put together prix fixe menus of favorites and some this-week-only new dishes to introduce customers to what they’ve been missing.

“We’re looking to make new friends,” said Rococo owner and executive chef Bruce Rinehart. “As attractive as the dishes are on the special menu, especially for first-timers, I think they’re going to look at the features on top of the Restaurant Week menu and say, ‘I can’t wait to come back and try some more stuff.’”

“We want something fun, not necessarily easy to execute, but something we can do alongside our usual menu,” Partain said. 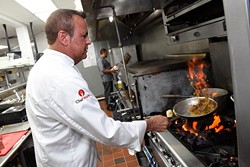 Watch out, anti-francophiles, because here’s some French coming at you. Prix fixe translates to “fixed price,” and it’s a popular way for restaurants to give diners the biggest bang for their buck.

By creating a set menu with a smaller selection than the norm, chefs can ensure customers a better price on some items by buying in larger quantities, prepping ingredients more efficiently and streamlining the ordering and serving processes.

Usually consisting of an appetizer, an entree and a dessert, prix fixe menus are a staple of holidays such as Valentine’s Day, Mother’s Day and Christmas.

For Oklahoma City Restaurant Week, Oklahoma Gazette gathered 46 restaurants to create one or more prix fixe menus, each at a set price. They’ll still serve their regular menus, but those in the know can get special dishes at a special price by asking for the prix fixe menu.

Restaurant Week is an easy game to play.

Check out menus in our guide to Restaurant Week in this issue or visit okcrestaurantweek.com. Look over the delectable options spanning different cuisines, price ranges and comfort levels.

Once a few (dozen) places are selected, call and see if reservations are required. Restaurants will get booked fast, so it’s best to ensure there’s a table available. Some don’t take reservations at all, so decide when to stop by with friends.

When visiting, be sure to ask for the prix fixe menu. Not only do diners receive a great price, but Regional Food Bank of Oklahoma receives $1 for each lunch and $2 for each dinner sold. (See “Healthy eating” on page 17 for more details.) 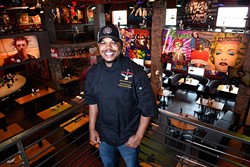 It can get boring making the same dishes every night. The secret of most chefs is that they are trapped by their successes. Just like U2 no doubt gets tired of performing “With or Without You,” so too do kitchen staffs chafe at the prospect of cooking the same steak, potato and salad items at every service.

That’s part of the impetus behind specials. They take advantage of good pricing on seasonal ingredients and give cooks opportunities to create something original.

“It’s something I really enjoy doing. It’s relaxing to create different dishes for people,” he said. “I like to do my research, see what people like and put my own twist on it. I’m just happy around food.”

The best part is those who fall in love with the appetizer during Restaurant Week won’t be abandoned once it’s over.

“Everything I need to make it is in my kitchen,” Frazier said. “If they love it, it’s something I can do upon request. I can make it anytime.”

“We are much more than just a pub,” he said. “Most of the menu are things I’d never tried before, but I wanted to be creative and really put myself out there.”

His chicken fried portobello with cauliflower puree and greens is a nod to Plaza District’s healthy population of vegetarians and vegans, and it’s also his audition for new diners.

“Half the time, when I tell people I’m head chef here, they say, ‘What? There’s a kitchen there?’” he said. “Yes. There is. And we’re passionate about it.” 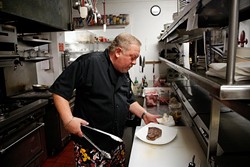 Frazier spent five and one-half years in the military, so he understands the importance of community service.

“Being able to help the food bank, I love doing that,” he said.

Monreal said his experience with RFBO is personal. He has friends who work there, and he has volunteered. He also has been on the other side of the exchange.

“I remember eating quesadillas every day and every night for months,” he said. “Everybody needs some help now and again.”

To him, being able to give back, especially by cooking food he’s excited to share with the city, “feels amazing.”

Remind friends and family that this is an opportunity to explore Oklahoma City’s blossoming food scene at a great price while helping the shocking number of Oklahomans who are food insecure.

Most of all, enjoy it. Restaurant weeks all over the country help support regional cuisines, expose diners to their new favorite dishes and draw attention to the great food that’s available.

There’s nothing wrong with going to a favorite place, but this is Oklahoma City Restaurant Week.

Take a bite out of the city.

Print headline: Edible ambitions, An event brings great new dishes to your favorite restaurants for a great cause.

See our guide in this week's print issue or visit okcrestaurantweek.com.