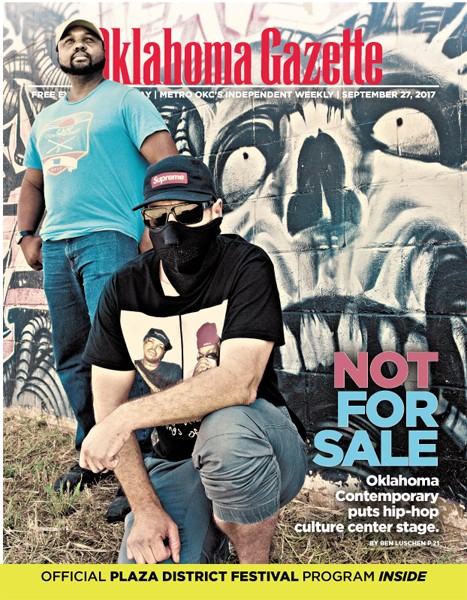 Growing up in the 1980s, Kris Kanaly skated with his friends through the drainage ditch near Penn Square Mall, a thrill the youth of today are prohibited from enjoying.

A whirl of color rushed past him as he sped through the long concrete halfpipe. Kanaly loved skating in the area, but he was as or more fascinated by the mystifying scrawls of colorful graffiti that covered the ditch.

Some of the graffiti was left by neighborhood punk rockers or hip-hop heads. Other pieces were markings left by gang members or even racist messages made by who knows whom. All of it, to Kanaly, was strange and illegible — at first, anyway. The aerosol lettering was unique and beautiful.

“It was cryptic,” Kanaly said. “I couldn’t read it; my friends couldn’t read it. But once we found out about what it meant, it was this hidden type of language we could all use.”

Kanaly is one of 10 state street artists participating in Oklahoma Contemporary’s exhibition Not For Sale: Graffiti Culture in Oklahoma, a two-month art show in which graffiti murals will be painted directly onto the art gallery’s polished concrete walls. An opening reception is set to begin 5:30 p.m. Oct. 5 at Oklahoma Contemporary’s State Fair Park headquarters, 3000 General Pershing Blvd., with an artist talk scheduled for 6:15 p.m.

The drainage ditch Kanaly and his friends once skated is now fenced off from the public. Its rainbow of graffiti was scrubbed away long ago, but in recent years, a mural and street-art culture has captured the city’s imagination in ways that seemed unimaginable to Kanaly in the ’80s and ’90s.

Kanaly, partly inspired to learn the craft by the work he saw in the drainage pipe as a kid, has been a street artist in OKC for more than 20 years. Today, he is known as a curator for Plaza Walls, the back-alley mural project found in 16th Street Plaza District that has had a large role in legitimizing street art to the local community.

Though Plaza Walls has become a popular attraction and frequent tourist destination, Kanaly recognizes Not For Sale as a landmark event for local street and graffiti artists and is thankful for those who made the show a reality.

“I think recognizing [graffiti] as an art movement and a style of art that is acceptable — I think that’s a monumental achievement for Oklahoma and our scene here,” he said. 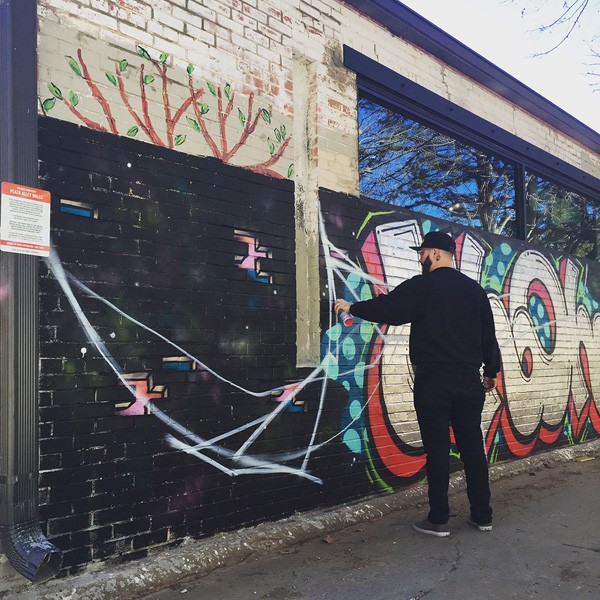 The style as we know it today — spray paint or marker pen used to write messages or create mural images on walls, train cars and other public places — was refined and widely popularized in late-’70s New York as an element of the rapidly expanding hip-hop movement. That interest has since ballooned into a wider world of fine-art murals and street art found in urban areas across the globe.

Oklahoma Contemporary wanted to showcase the state’s graffiti artists both to highlight a form of expression that is contemporarily relevant and to draw in a group of people who might not be regular art gallery visitors.

“We love for our galleries to be really accessible,” said Jennifer Scanlan, Oklahoma Contemporary’s curatorial and exhibitions director. “Graffiti is an art form that lots of people have exposure to that don’t always go to museums.”

Not For Sale runs through Nov. 30 and will coincide with Oklahoma City’s second official observance of Hip-Hop History Month in November. Mayor Mick Cornett issued a proclamation in 2016 giving citywide recognition to the international celebration.

“Hip-hop culture is something that has grown in prominence and influence in the last four decades,” Davis said. “Now, hip-hop and graffiti are global phenomena. They’re practiced on every continent, including probably Antarctica.” 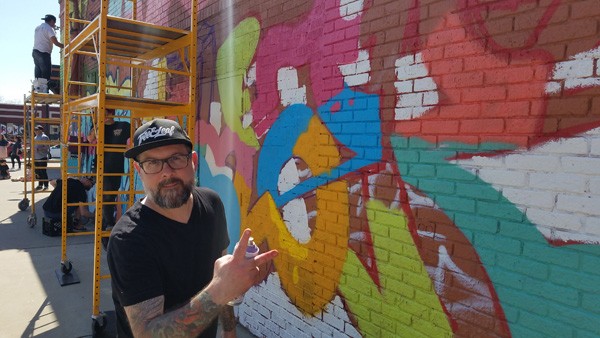 Not For Sale officially opens Oct. 5, but its biggest event does not come until Nov. 4, when ONESoul Charity Event Hip-Hop Jam helps kick off Hip-Hop History Month. The daylong celebration begins at noon and features dance battles and open-floor dancing, live graffiti competitions, musical performances, food trucks, art projects and more. The early portion of the event is geared toward families, and alcohol sales begin at 7 p.m. as it shifts to an adult-focused event. Admission is $10 and goes toward student art programming scholarships.

Little has been teaching hip-hop art classes at Oklahoma Contemporary for several years. It was originally his idea to put a graffiti art show directly on the gallery walls.

There have been graffiti shows in the past, but Little said this is the first time he can recall the art form being exhibited in one of the city’s esteemed art institutions.

“This is Oklahoma Contemporary — this is state-level,” he said. “This is them supporting something that is outside of the norm. It’s not just public art to be seen. It’s in an area where this is not something you normally see.”

Just as the exhibit title suggests, none of the pieces that will be made for Not For Sale are intended for purchase. These artists aren’t being pressured to make pieces for someone’s home or office. The finished product conforms to the artist’s creative vision alone.

“You can’t buy what you see on the walls here,” Little said. “This art is here to tell you something — it’s here to show you something. It’s not for sale.”

The art on the walls will be painted over after the exhibit ends. Oklahoma Contemporary plans on moving its headquarters from State Fair Park to its art campus near Automobile Alley with a target move date set for late 2018.

“The show will live on,” Davis said. “It will just be hidden behind layers of paint. It will become part of the bones of the building.”

Though his work is now found in the finest museums around the world, the impressionism of late 19th-century French artist Claude Monet was once as scoffed at by art critics and the powers that be as any graffiti artist.

Art critic Louis Leroy once wryly commented that “wallpaper in its embryonic state is more finished” than the new, vague painting style that emphasized natural light. The first impressionists famously held their own exhibition, the Salon des Refusés (“exhibition of rejects”) in 1863.

In a similar fashion, Not For Sale hopes to further legitimize graffiti and hip-hop as art forms worthy of study — Little grimaces at the thought of someone forming an impression of hip-hop based solely on the latest Drake or Migos music video.

“I think a lot of people get a misconception about hip-hop when they see pop rap,” he said. “That’s not hip-hop.”

The type of hip-hop Little teaches to students at Oklahoma Contemporary encompasses all the elements on which the culture was originally founded, including graffiti, breakdancing, DJing, emceeing (rapping) and a knowledge of the past and community. As with any form of art, what’s done with those techniques is in the hands of the individual artist or the financial interest that funds them.

It is no secret that tensions have long existed between graffiti artists and law enforcement. Scanlan said Oklahoma Contemporary has reached out to the Oklahoma City Police Department, which has been supportive of the indoor show.

Not For Sale artist MANIK (who prefers to use graffiti name out of fear of police targeting due to past work) said for the last 15 years, OKC has taken a hard stance on unpermitted graffiti, even if it is left there with property owner’s consent.

MANIK said he commonly hears people suggest graffiti artists in the city simply find somewhere in OKC where law enforcement will allow them to paint and stay there. He said such arrangements haven’t seemed to work in the past.

MANIK is nearly 40 and, like many of the Not For Sale artists, has been a graffiti artist for more than 20 years. He is also a married father and a business owner.

“They always expect it to be some punk kid,” he said, “and we all start out like that. I was a punk kid, you know? And now I’m not.”

Little said new trends are usually met with resistance before they are accepted into mainstream culture. Hip-hop and graffiti are well on their way to that mark in some other cities, if they have not reached it already. Oklahoma City, Angel said, is getting close but is not all the way there yet.

Not For Sale is a monumental step in that direction.

“You’re always going to have opposition,” he said, “but if you keep pushing and keep loving what you do, the opposition fades out and turns into something else.”

Not For Sale opening night reception