After sniffing, swishing, aerating and sipping more than 30 selections, we proudly present the top 16 results in the Gazette’s 2017 Summer Brew Review.

by Greg Elwell and Gazette Staff Of all the famous historical quotes about beer attributed (often erroneously) to great thinkers and drinkers like Plato, Benjamin Franklin and Thomas Jefferson, perhaps the most relevant to us as Oklahomans as we turn our minds to summer comes from actor Jack Nicholson: “Beer; it’s the best damn drink in the world.”

Indeed it is. But even after we narrow the field of beverages down to beer, there are still many choices to make. Lager or ale? How smooth or bitter should it taste? Day drinking, after-yard work cool-down or nightcap? What is the best beer for your needs?

Oklahoma Gazette is here for you. After sniffing, swishing, aerating and sipping more than 30 selections, we proudly present the top 16 results in the Gazette’s 2017 Summer Brew Review.

For the Gazette’s Summer Brew Review, samples were focused largely on warm weather-appropriate styles. Tastings were blind to ensure panelists shared honest assessments of the beers without regard to brand. Each round was divided into a similar style so three panelists would judge similar beverages against commonly held standards for that type of drink.

Scoring sheets included a list of descriptors to be checked off and five categories in which each sample was judged: aroma, appearance, flavor, mouthfeel and overall impression. Appearance, mouthfeel and overall impression were each scored on 6-point scales. Aroma and taste were scored on 10-point scales. The highest possible combined score is 38. Beer scores listed are combined average scores from the three-judge panel.

The scores are weighted in favor of taste and smell, each worth up to 10 points, and appearance, mouthfeel and overall impression earned up to six points each for up to 38 points per sample.

The top 16 beers are listed here with comments aggregated from the entire three-judge panel. 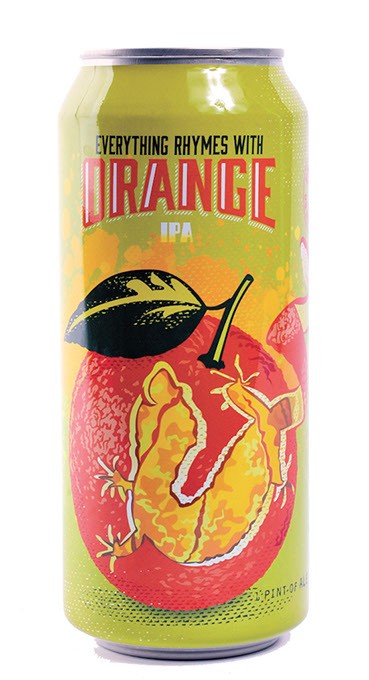 What rhymes with super floral and hoppy rind? The panelists thrilled at Roughtail Brewing Company’s Everything Rhymes with Orange, giving the IPA plaudits for its juicy, citrus bouquet and “hops like LeBron.” The cloudy, orange-yellow brew is a smooth drinker with little pucker, making it an extremely desirable IPA. The beer is creamy sitting on the tongue with tropical fruit flavors and an easy-to-quaff mild bitterness. “Very solid IPA,” commented one expert. “[A] great late-addition hops.” Another noted its middle-of-the-road carbonation, “the perfect amount for an IPA.”

Panelists gave high marks to locally made and named Saturday Siren from COOP Ale Works, a dry-hopped pilsner that delivered good, subtle hop character and juicy citrus flavors. The beer is “light and very crushable,” as one expert said, with a gorgeous yellow tint that presented clean and clear in the glass. The flavors of hops and sweet fruit fade easily with little aftertaste and a mildly astringent mouthfeel. Saturday Siren has a light aroma of mosaic hops and pithy orange juice befitting a “great flavor-forward pils” that makes it a great entry point into hoppy beers.

The hazy red-and-copper complexion of COOP Ale Works’ Cask-It Series Brandy Barrel Aged DNR with Cherries helped make this Belgian strong dark ale one of the prettiest and tastiest beers sampled. The brew has a nose of cherry and liqueur (obviously) but also held a little heat and aromas of sweet dried raisin and fig. Though one called the flavor “boozy as hell,” all gave it extremely high marks for its tart cherry taste and smooth and creamy texture that coats the mouth. At 12.8 percent ABV, the complex and interesting brew also is the most potent in our top 16.

“Dirty socks, but not in a bad way. I know; weird,” said one panelist about the aroma of this rye pale ale. Iron Monk Brewing Company’s Exit 174 Rye Pale Ale — brewed with rye from 46 Grain Company in Ames — wowed judges with its deep-orange sunrise appearance and bready flavor with plenty of hops and citrus-grapefruit notes. Exit 174 drew praise for its great balance of rye and hops with good carbonation. The hops added just the right sting without overwhelming the brew, creating a solid beer that wisely incorporated the rye into an overall delicious product.

“I would wear this,” said one panelist of Rogue Ales’ Hazelutely Choctabulous brew. Touted as a “candy bar in a bottle” right on its label, the blend of 40 percent chocolate stout and 60 percent hazelnut brown nectar ale whiffs of wood and tobacco and has a dark hazelnut hue. The scent of sweet chocolate gives way to a flavor of lightly roasted malts with a mild bitterness and hints of coffee. Despite its color, Hazelutely Choctabulous has a thinner texture that slips away quickly, leaving the drinker eager to take another sip. “A bit light, but great overall,” commented one judge. “Good blend of roast and bitterness,” said another.

The best part of waking up could be a can of Iron Monk Brewing Company’s Milk Stout, which presented panelists’ noses with a huge espresso presence and a bit of vanilla beans stacked with roast malt. This dark brown ale delivered on coffee taste as well with a lightly boozy, sweet flavor. The texture is a little thin and fades quickly without much aftertaste. The panel agreed this flavorful brew “could be great over ice with milk.”

Tasters loved the crystal-clear golden hues of Dogfish Head Craft Brewery’s 60 Minute East Coast-style India pale ale with an air-light, almost imperceptible aroma, and one panelist caught hints of bubblegum. The flavor was described as lovely, and panelists praised the light hops and bit-of-citrus taste that made the beer extremely quaffable. “Nice mix of malt and hops,” said one. “Deft bittering.” The texture is smooth with little carbonation. It earned a designation of a “flagship” beer that is a solid pale that’s not overly hop-heavy.

Living up to its name, Iron Monk Brewing Company’s Velvet Antler pours an amber red color with a slightly bubbly head and gives an aroma of malt that one reviewer categorized as “pretty standard.” Its flavor was rich with flavorful malty grain and tasted “roasty” and smooth with peppery components. It has a filling mouthfeel with medium-low carbonation and a full, nice creaminess. Velvet Antler is on-point in style. Most experts agreed it is a great amber with no cons.

Prized for its golden sunrise color, Ballast Point’s Pineapple Sculpin IPA with natural grapefruit flavors has a light head and an aroma that’s at once hoppy, grassy and floral. Judges noted its juicy scent of mango and grapefruit, which brought out a pleasant bitterness on the palate with a good balance and malt backbone. The very hoppy beer lingers on the tongue with a “light, sweet flavor without the sugar,” as one panelist described it. Another called it a “by-the-numbers IPA.” The rest of the group said it was enjoyable with a great aroma.

The California IPA invasion continues with Ballast Point’s Grapefruit Sculpin. Though it’s named for a spiny fish, the flavor is bright with lemon zest and wheatgrass. “Good bitterness,” observed one expert, though it felt “a little light on the malt” on his palate. This hoppy IPA’s citrus essence shines through. Its mouthfeel was light with a tickle of bubbles and drinks smooth. The clear, golden beer won favor for its delightfully juicy and fresh floral aroma.

With a nose that is sour and sharp, Twisted Spike Brewing Co.’s Dirty Blonde Belgian-style ale presented with a color one panelist called “cloudy yellow, like white wine.” Drinkers loved the hints of clove, yeast, pepper and light banana and its smoky Belgian taste. The flavor is “reminiscent of a hefeweizen,” remarked one judge, who liked its creamy texture and praised it as a “tasty beer.” It’s a light, drinkable ale with good flavors, a bite of phenolic spice and alcoholic heat.

Aptly named, the Stone Delicious IPA from Stone Brewing Co. hits the glass with a hazy gold complexion and a short head. The smell was described as clean and milky with sweet hops and a hint of flowers. For lovers of robust IPAs, the citrusy IPA with Lemondrop and El Dorado hops gives drinkers strong bitterness with a nice balance of grapefruit and hops. One reviewer called it “almost perfect” but also noted its “lingering bitterness.” The mouthfeel starts smooth with medium-low carbonation and ends with a slightly astringent sting. “Solid IPA,” declared another panelist.

Twisted Spike’s saison brew Golden Spike was deemed “Belgian-y (Is that a word?)” by one panelist, who also said he caught hints of malt, lime and jalapeño on the nose. The aroma of fruit and vegetation rises from this hazy yellow ale with a sour, slightly fruity flavor full of signature hops sting. It is “good for style” with “no noticeable flaws,” noted one judge who enjoyed its “nice, rounded mouthfeel.” Another said he liked it and praised the slightly sweet, slightly hoppy beer as “easy drinking, as farmhouses go.”

Scent and flavor often go hand in hand, but Ballast Point’s Habanero Sculpin India pale ale with habanero peppers added (the label also warns “heat may vary”) pleasantly surprised the entire panel with its floral aroma and nice hop presence that is grassy and musty yet clean. Upon tasting the golden, slightly cloudy IPA, though, the taste of fresh garden peppers came through clearly. The slow burn reminded one panelist of Tabasco with heat and spice and a mouthfeel that “stings for days.” “Yowza, this is hot,” he said. Another said it is a “great, spicy IPA” but wished it had even more flavor.

The lone hard cider to make it into our top 16, Bold Rock Carolina Apple Granny Smith Hard Cider sits in the glass with a slight yellow hue that is almost clear and an aroma of light apple and white wine. Our panelists described it as estery with an abundance of fruity banana and bubble gum scents. Tasters loved its understated carbonation that was clean with no residue. The easy-to-drink beverage tasted of sparkling white wine with strong, sweet apple notes and a bit of pear. “Not too sweet,” commented one panelist, who called it an interesting cider that was not cloying. “The sweetness is nice,” said another.

Based on a German-style gose, 405 Brewing Co.’s Cool for the Summer is brewed with limes and a touch of spearmint. Its aroma translates on the nose like a “salt-rimmed lime margarita,” one expert commented, and is fresh and light. The beer poured a bright yellow, “like hazy apple juice,” another reviewer said, and tastes of apricot and coriander. Panelists enjoyed its salty, lemony notes and called it tart and grassy. “Basic gose, but I’m a bit of a fan,” admitted another expert, who also enjoyed its medium mouthfeel. The bubbly brew is an interesting and light beverage that is ideal for summer nights.

Nick Trougakos is a longtime beer lover who runs The Thirsty Beagle beer blog (thirstybeaglebeerblog.com), which covers happenings big and small in the state’s craft beer world. He also founded the Oklahoma City Craft Beer Week event in 2014 to draw attention to the local brewing community.

Patrick Glueck runs the YouTube beer video blog Making It Grain, where he reviews local and national craft brews. In addition to creating frequent videos — he has posted 96 episodes in the last 10 months — Glueck also is a home brewer.

Greg Elwell has helped cover Oklahoma City’s food and lifestyle beats for the Gazette for close to a decade. He also enjoys local beer.

Print Headline; Selection process, It was a tough job, but somebody had to do it.