Cover story: Oklahoma pollution might be a Texas-sized problem 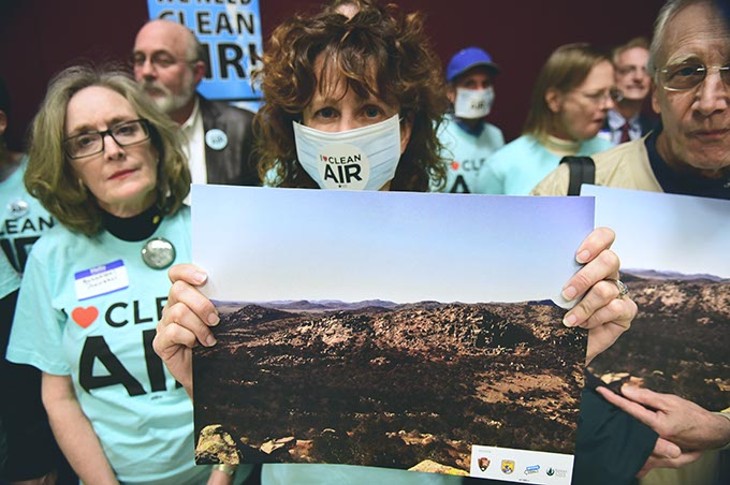 A tour of the Wichita Mountains used to include a stop on Mount Pinchot and a tour guide pointing out the granaries in Grandfield, nearly 35 miles away.

“We don’t even point them out anymore because you can’t see them,” said Bobby Williamson, who lives just outside the gate to Wichita Mountains National Wildlife Refuge and volunteers with Friends of the Wichitas.

A steady increase in air pollution has created low visibility in one of Oklahoma’s most popular nature reserves, and the biggest culprit is Texas.

“A lot of the haze in our area comes from Texas,” Williamson said.

The Wichita Mountains are considered one of 158 natural areas in the United States designated to be protected from high levels of air pollution, and states are required to develop plans to play their part in meeting Regional Haze Rule standards set by Congress and the Environmental Protection Agency. Texas, according to the EPA, has fallen woefully short in creating a plan to meet those standards.

“The current [Texas] plan is not just ineffective; it would not meaningfully reduce haze in the Wichita Mountains until 2155,” said Whitney Pearson, a regional coal organizer for the Oklahoma chapter of the Sierra Club.

Oklahoma has to do its part, but with just 3.9 percent of pollution in the Wichita Mountains originating from within the state — compared to 27 percent from Texas — any meaningful cleanup of the air won’t take place without major changes in coal power plants in Oklahoma’s southern neighbor.

“There is no way to have any meaningful improvement without Texas stepping up to the plate,” said Emily Harris, a public health facilitator for Environmental Justice Advocacy and member of the Faulkner County Citizens Advisory Group in Arkansas, which is also negatively impacted by Texas-based pollution. “The rules from the [EPA] will reduce the haze pollution in Oklahoma and Arkansas.”

The low visibility in places like the Wichita Mountains stems from pollution particles that absorb and scatter light. However, beyond just limiting long-range views, air pollution from sulfur dioxide can also cause respiratory illness and disease, along with an array of adverse respiratory effects including bronchoconstriction (narrowing of the airways that can cause wheezing, coughing and shortness of breath) and increased asthma symptoms, according to the EPA.

A plan to reduce air pollution submitted last year by Texas was deemed unacceptable by the EPA, which is in the process of holding public hearings over its own recommendations on how Texas can meet requirements in the Clean Air Act. Those recommendations include installing air scrubbers at several Texas coal power plants to limit the release of sulfur dioxide.

The Texas Commission on Environmental Quality has responded by saying the EPA recommendations would result in an additional $2 billion and would have limited impact on air quality.

“The particular requirement we are dealing with is the reasonable progress requirements,” said Guy Donaldson, a section chief with the EPA. “We felt like we needed to take a close look at if those requirements were being met in Texas. Wichita Mountains are heavily impacted by sources in Texas, more so than by sources in Oklahoma, and we have decided there were more controls that should be in place.”

While Texas is the biggest contributor to air pollution in the Wichita Mountains, particles from power plants in other states, Mexico and Canada have also been found in Oklahoma, the EPA reports. But Donaldson said removing all Oklahoma-based pollution, along with other sources, would do little to improve conditions at the Wichita Mountains without changes in Texas.

The EPA has grown accustomed to pushback by states, not just from Texas but also Oklahoma. The EPA won a battle last year with the state’s largest utility, Oklahoma Gas & Electric (OG&E), to upgrade several power plants. The U.S. Supreme Court previously rejected a request from OG&E to hear an appeal to the EPA’s standards, which upheld a lower court’s ruling that the utility company had to comply with EPA demands.

While OG&E is converting some coal plants to natural gas and installing air scrubbers at other plants to comply with EPA demands, environmentalists say the utility is missing an opportunity to do more.

“We don’t feel OG&E has taken a long-term look at what a larger reliance on wind and renewable energy could mean later on,” Pearson said. “That’s one of our major frustrations with OG&E right now.”

While the EPA can enforce pollution benchmarks, the agency does not mandate the technology used. Whether a utility or state wants to comply by adding air scrubbers to existing coal plants or embrace wind-generated power is completely up to them.

“We identify what we think is the state-of-the-art technology, and [utilities] can meet standards using that technology; but if they can find another way, they can do that,” Donaldson said. “We do not mandate the technology they have to use.” OG&E has until 2019 to comply with EPA standards, a move the utility has said will increase consumer bills.

“We are disappointed on behalf of our customers,” OG&E spokesman Paul Renfrow said last year following the court decision. “We still believe that the Oklahoma State Implementation Plan would have enabled us to meet the Regional Haze requirements at a much lower cost. However, we accept the court’s ruling and now turn our attention to meeting the 55-month compliance deadline.”

In the pushback the EPA has seen from utilities and states, Oklahoma Attorney General Scott Pruitt has been one of the agency’s loudest critics in recent years and advocated for OG&E’s appeal of EPA standards.

Pruitt isn’t the only Oklahoma lawmaker to criticize the EPA. Republican primary races for the U.S. Senate and House last year featured candidates attempting to out-duel each other on who hated the EPA more. A debate between Rep. Steve Russell and candidate Patrice Douglas featured tough talk from both candidates on how, if elected, they would fight the EPA.

The nation appears split on its support of the EPA, and while public support for putting environmental protections over economic growth has declined over the past 30 years, a majority of Americans (51 percent) still believe the environment should take priority over the economy in many cases, according to Gallup.

Threats to the EPA’s reach could intensify with a Republican-controlled House and Senate, but those threats will lack bite with a Democratic president able to veto legislation and set the course for the Clean Air Act.

However, that reality is why environmental advocacy and utility companies will pay close attention to future elections, including the 2016 presidential race.

“With different [presidential] administrations, approaches are different on how they are going to implement the Clean Air Act,” Pearson said. “I’d say 2016 is pretty important for all the progress we have made. We don’t want to turn back, and we aren’t going to.”

While environmental sustainability is political for some, others see it as a bipartisan issue that could end up being one of the most important of the 21st century.

“I believe this is probably the most important ethical issue of our time,” said Bruce Prescott, Oklahoma Faith Network director and an advocate for the Wichita Mountains. “It’s not just the environment that is at stake, but it is also our health that is at stake.”

The EPA was in Oklahoma City last week to host a public hearing on its recommendations for Texas’ implementation plan, and the agency is accepting comments from the public until April.

The EPA hopes to have its own implementation plan finalized by September, setting Texas on a course for dramatically reducing its air pollution that so often finds its way into Oklahoma and other states.

“Texas is the biggest contributor of air pollution in the country,” Pearson said. “A major cleanup plan has to start with them.”