However, by far the biggest college football showdown, one that unites all Oklahomans, is Saturday’s game, which pits the OU Sooners against the Texas Longhorns at Cotton Bowl Stadium. 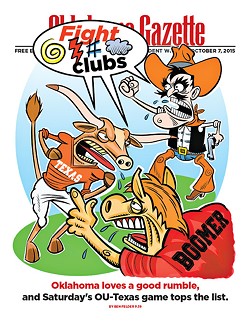 Oklahoma Bedlam is one of the biggest football rivalries in the state. Since 1904, both teams and fans have played, and watched, the game with white-knuckled intensity.  The University of Oklahoma (OU) holds the series overall with 83 wins and just 17 losses to Oklahoma State University (OSU) and seven ties.

However, by far the biggest college football showdown, one that unites all Oklahomans, is Saturday’s game, which pits the OU Sooners against the Texas Longhorns at Cotton Bowl Stadium.

A dig at Texas is one of the best applause lines in Oklahoma, and it’s something Lt. Gov. Todd Lamb learned early in his political career.

“We want the best thing in Texas to be I-35 North,” Lamb told a group of business owners in 2011, just days after taking office for his first term.

He went on to joke about always trouncing Texas in football and wanting to beat the state in business growth. It’s a talking point he continues to this day, including a business conference his office hosts called Beat Texas.

“We have an expectation to go to Dallas this weekend and whop Texas,” Lamb said during last year’s conference, just days before the annual game between OU and the University of Texas (UT). “In the same way, I want to beat Texas every year in every economic quarter.”

His cockiness is understandable given the Sooners’ edge recently. The Sooners are 5-3 against the Longhorns over the past eight years, but Texas owns the overall series record at 60-44-5 since the two teams started competing in 1900.

However, Lamb’s assessment that Oklahoma has room to grow on an economic scale is accurate. Texas’ gross state product is nine times larger than Oklahoma’s, according to the US Bureau of Economic Analysis. Texas also boasts five cities larger than any in Oklahoma and an overall population that is seven times larger.

When it comes to setting its sights on a hated rival, Oklahoma has chosen a state that is massively bigger in almost every population and economic metric. Ask many residents and they’ll tell you Texans have let those facts go their heads.

“I think part of why a lot of people don’t like Texas is because of the mindset of Texans in general,” said Dillon Hollingsworth, sports editor at The Oklahoma Daily. “You don’t get a lot of people from Arkansas and Kansas and Oklahoma talking about how their state used to be its own country and how everything is bigger and better here. It’s part of Texas to flaunt that.”

Another way to describe Texans, according to Oklahoma supporters, is “arrogant.”

“While preparing this book, I polled more than 100 OU fans to determine exactly what they hated about the Longhorns,” wrote Jake Trotter in the introduction to his book I Love Oklahoma. “The overwhelming majority responded with the same word: ‘arrogance.’”

Trotter, who covers the Big 12 Conference for ESPN, went on to write that Texas has displayed its arrogance since it threatened to close an Oklahoma-owned bridge in 1931 to its 2008 claim the Sooners didn’t deserve to be the outright Big12 Conference Champion.

“This is why Oklahomans love to hate the Longhorns,” Trotter added. 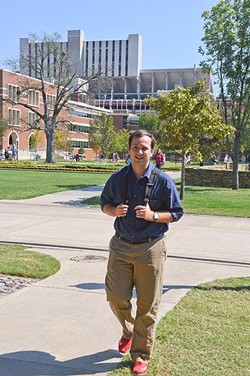 “I really didn’t know what I was getting myself into,” Oklahoma football player Julian Wilson told Sooner Sports about his first experience in the Red River Showdown game last year.

The annual match between the two schools is a carnival-like atmosphere, as it is played in Dallas at Cotton Bowl Stadium in the middle of the State Fair of Texas. The location is almost exactly halfway between the two universities, and crowds are typically divided between Oklahoma and Texas fans.

“It’s a big deal,” Hollingsworth said. “In the past, when we haven’t covered away games, we have always sent someone to Texas because it’s the biggest game of the year. [The newspaper issue before the game] is always the most intense.”

OU and UT newspapers do an editorial exchange before each year’s game, which The Oklahoma Daily doesn’t do with any other school for any other game, Hollingsworth said.

“We don’t have a fall break at OU; we have the Texas game week,” he said. “It’s definitely different, and it’s definitely a bigger deal because that game is something special.”

The winner of the game takes home the Golden Hat trophy, bragging rights and an important conference victory.

In 109 meetings, the game has only been played in Oklahoma six times, four in Norman and two in OKC. Since 1932, the rest of the matchups have been at the Cotton Bowl.

Texas has the overall series advantage, but Oklahoma is coming off last year’s 31-26 win. A team has not won multiple Red River Showdown games in a row just 16 times, which bodes well for the Sooners.

OSU also has a heated rivalry against UT, and although the Longhorns have beat the cowboys 24 times and lost only six, OSU has the prestige of being the only team in Texas history to beat the team four consecutive times in Austin. 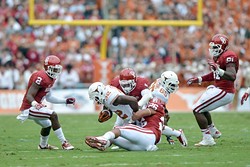 Oklahoma fans might think Texans are arrogant, but beyond each state’s pride, there are actually a lot of similarities between the two, especially to an outsider.

“I didn’t see [Texas and Oklahoma] as really all that different, especially coming from the northeast,” said Chris O’Connell, a senior editor at Alcalde, UT’s alumni magazine, who moved to that state in 2011. “I didn’t necessarily see the South as all one place, but there are many similarities between Texas and Oklahoma.”

While that might make some Oklahomans’ skin crawl, O’Connell said he sees both states as having a laid-back culture that values heritage and college sports, which is not always embraced in the northeast.

However, he does see some differences between the two rivals.

“I thought when I moved to Austin [from New York], I was moving to a city with a slower pace,” O’Connell said. “When I was in Oklahoma City, I felt like it was even slower.”

O’Connell has written about the rivalry between OU and Texas before and believes it starts with both sides having an intense passion for college athletics in a way that is hard to find in other parts of the country.

“One similarity between the two [states] is people who didn’t even attend the school were really invested in the sports of the school,” he said. “I have friends who didn’t go to UT but are big UT fans.”

O’Connell saw the same passion when visiting family in Oklahoma.

“I remember one time we were [in Oklahoma] during Sam Bradford’s rookie year with the [St. Louis] Rams,” he said about the former OU quarterback who now plays in the NFL. “People were so dialed into what Bradford was doing and rooting for him, even though they weren’t Rams fans. That doesn’t happen where I’m from.”

That passion is highlighted by USA Today’s ranking of college football fans, which currently has Oklahoma at No. 10 and Texas at No. 29. This is compared to OSU’s ranking at No. 115. Called the Fan Index, the ranking uses social media aggregation and online polling to rank fanbases. In last year’s rankings, which had Texas at No. 9 and Oklahoma at No. 10, USA Today credited UT fans for spending lots of money on team apparel, while OU got props for consecutive sellouts and attracting large national television audiences. 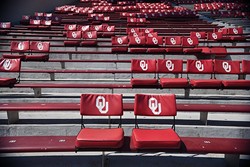 Growing up outside Houston and attending UT, Mary Ellen Knewston has plenty of Texas pride. But after following her fiancé to OKC after graduation, She has come to find a lot to like about her new hometown.

“Oklahoma City is awesome, and now I love it here,” said Knewston, who works at Gooden Group, a local public relations firm. “I think everyone in Texas has this huge amount of pride, but Oklahoma is a great place.”

Knewston heard plenty of Oklahoma jokes when her Texas friends found out she was moving, and she gets them from her Oklahoma friends, too.

“People will say, ‘You’re from Texas? I wish you wouldn’t have told me that; now we can’t work together,’” she said. “It’s all in good fun, but I feel like it’s the same type of person here that you will find in Texas.”

When asked to label differences between the two states and why some might prefer one to the other, Knewston said UT attracts many students simply because it is in Austin.

“I think Texas has bigger cities and it’s going to attract more of the stuff you want, like restaurants, bands and other stuff,” she said. “You might have more options in a place like Houston or Austin, but I wouldn’t want to say that without saying Oklahoma City has an amazing variety of restaurants and I’ve learned just how much is going on here.”

With experience in both states, it might be easier for her to put the rivalry aside, especially since she is not much of a football fan. But that doesn’t mean this weekend’s big game won’t have an impact on her life.

“We planned our wedding around the OU and Texas game because we knew people wouldn’t want to come if it was on the same weekend,” Knewston said. “I don’t follow the team too closely, but [this weekend] I’ll definitely be paying attention.” 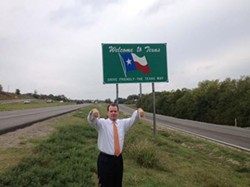 Texas is proud of its Rangers, the law enforcement agency that has inspired television shows and movies. But one former Oklahoma governor wasn’t too impressed.

“All Texas Rangers can do is cuss and shoot craps,” said former Gov. William “Alfalfa” Murray after he ordered the removal of Texas barricades blocking the Red River following a dispute over toll bridges in 1931.

Texas threatened to send its Rangers into Oklahoma, and the conflict inspired the Red River label for the annual OU-Texas football game.

Lt. Gov. Todd Lamb is a regular critic of Texas when stumping across Oklahoma. He carried his dislike into this picture from 2012 when near the Oklahoma-Texas border.

Sometimes the best way to stick it to a rival is to pretend it isn’t that big of one. In 2011, when conference realignment threatened to see Texas leave the Big 12, Oklahoma football coach Bob Stoops downplayed the importance of the annual game.

“I don’t think it’s necessary to continue playing,” Stoops told reporters at a press conference. “No one wants to hear that, but life changes. If it changes, you have to change with it, to whatever degree.”

Print Headline: Neighborhood rivalry, The Oklahoma-Texas competition is about more than football for some, and it has roots more than a century old.

Watch it on ABC (Channel 5 in OKC)