“Rather than, ‘Here’s our food, and here’s your food,’ I grew up in a family where we all ate the same thing,” he said. 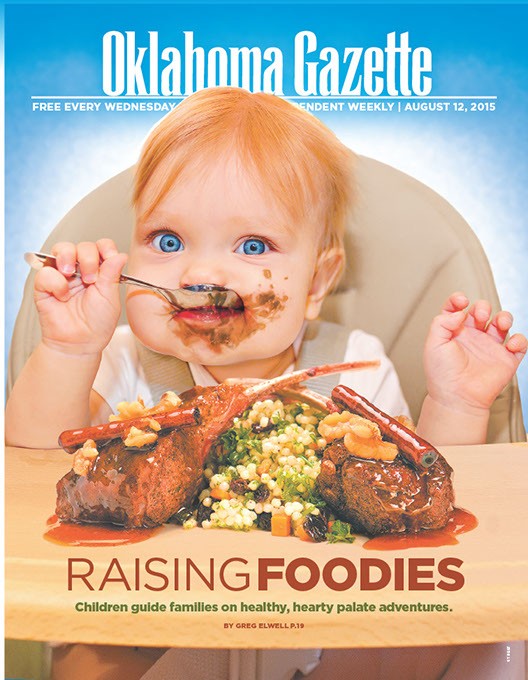 Tiny fists pound the table. A sneer crawls across the lips. The room grows quiet before a scream shatters the calm.

Dining with children can be a challenge under the best of circumstances. Whether it’s an aversion to greens, a distaste for fish or just a bullheaded desire to refuse any and all foods, mealtimes can be stressful for all involved.

And then you look across the restaurant and there’s some little angel happily devouring a plate of asparagus and Brussels sprouts, casually not flinging hot cheese dip in his parents’ faces, kids who eat sushi and salad and foods that aren’t lumps of processed chicken mush forced into molds before being deep-fried.

How do they do it? 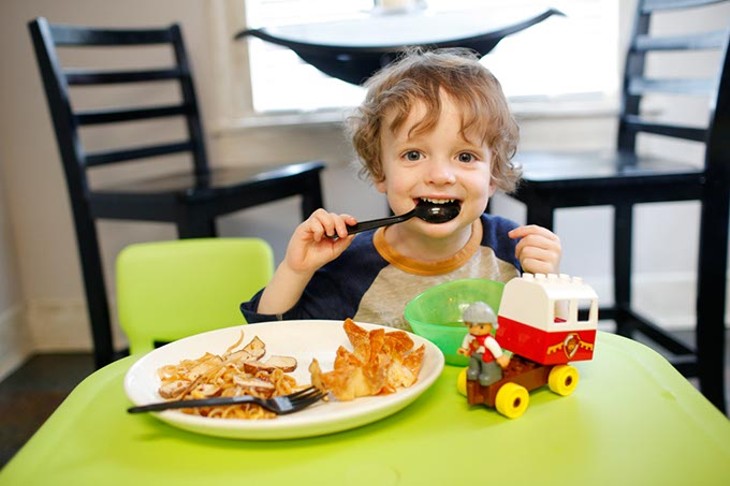 He and his wife Tricia are raising their 6-year-old son Benny to eat the same foods they do, much as their parents did.

“Rather than, ‘Here’s our food, and here’s your food,’ I grew up in a family where we all ate the same thing,” he said.

And Tricia started Benny’s food training young, making her own baby food and spicing it with exotic flavors.

“We never think of anything as off-limits to him,” Castro said.

Down in Paoli, Connie Chaples has a whole passel of kids with open minds and open mouths. Her youngest, 11-year-old Jade, loves sushi, a food even mom doesn’t much care for.

“We went out to dinner with a friend, and she asked, ‘What is that?’” she said. “So she gave it a try. They’re willing to give anything a try, and they always have the freedom if they don’t like it, they don’t have to eat it.”

Chaples said her kids didn’t stay on baby food long. As soon as they could eat a real piece of something, that’s what they’d eat. And like the Castros, Chaples said the kids eat just what she and her husband are having.

“They come in and ask me, ‘What are you fixing?’ and I tell them, ‘I don’t know. I haven’t finished putting everything in the pan yet,’” she said.

Being experimental in the kitchen has led her kids to develop more experimental palates. When they go out, the Chaples talk about ingredients, which piques their interest in trying new dishes.

Debbie Trachtenberg said her family is all about exploring the world through travel and taste buds.

“From day one, they ate what we did,” she said. “Even as little kids, they were eating sushi, eating falafel in Israel — they love Indian food.”

Daughter Sophie has her own food and travel blog, Simply Sophie Bea (simplysophiebea.wordpress.com), where she shares her favorite dishes from around the globe and back to Oklahoma City. Shocking no one, Kitchen No. 324’s Joenut gets a shout-out. 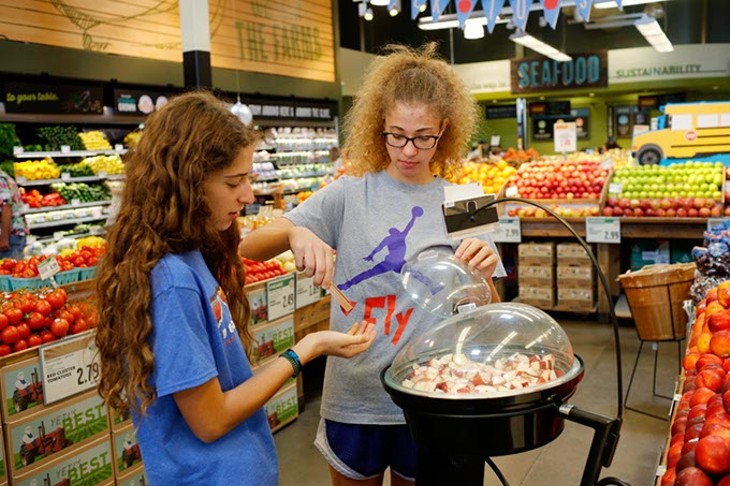 While Sophie enjoys a few sugary treats, the Trachtenbergs make it a point to “eat real food,” Debbie said.

“When we’re at home for dinner or packing lunches for school, we do a lot of vegetables,” she said. “My son plays three varsity sports. Sophie wants to play college basketball. Bella (the youngest) is into CrossFit.”

To power them through so many sports, Bella said, they can’t rely on a lot of junk food.

“Normally, I have grilled chicken or fish with grilled or steamed vegetables and a grain,” she said. “Lots of broccoli, asparagus and Brussels sprouts.”

Her fellow students at Westminster School sometimes gawk at her meals, though she has won a few converts.

“They like to bring Easy Mac, ramen noodles, Chick-fil-A,” she said. “There was a girl who had never had hummus, and I let her have some and now she eats it all the time. A lot of people like roasted Brussels sprouts when they try them.”

Castro said getting Benny involved has helped expand his diet.

“We’ll make stuff together, and he’ll help. We grow greens in the backyard, so he can go back there and pick them,” he said. “The fact that he’s doing it for himself goes a long way.”

Which doesn’t mean he’s immune from outside influence, Castro said. He won’t eat foods his friends think are weird anymore.

“But peer pressure works both ways,” he said. “Sometimes he convinces his friends to try new foods.”

Deborah Watts’ 2-year-old son Jackson is a voracious eater, partly because he’s a growing boy, but also because he gets to try a lot of delicious dishes. She has introduced him to new foods in the circuslike atmosphere of the hibachi.

“Hibachi is a good way to get kids to eat all types of veggies and meats,” Deborah said. “Shocking when my son eats all my scallops.”

“He seriously loves to eat. Yesterday, he came home and wanted a steak,” she said.

Beef is also on the menu for the Trachtenberg kids, who grew up eating with their father at Pho Lien Hoa.

For 15 years, Jeff Trachtenberg has been meeting friends at the popular Vietnamese restaurant once a week, sometimes bringing the kids along. It was a formative experience for Sophie.

“That’s my favorite food ever. I probably eat it twice a week,” she said. “Asian food is my favorite. Korean, Thai, Japanese, Vietnamese. That’s where it started.”

Castro said it puzzles people when they see his son chowing down on Vietnamese or Indian food. As food lovers, they weren’t about to leave him home just because they weren’t heading to “kid” restaurants.

“He’ll eat kid stuff, too, but his palate is like an adult. He wants Thai food and Indian food,” he said. “Benny picked Golden Phoenix for his birthday a couple of years in a row.”

Though they don’t eat out all that often, Chaples said her kids definitely have their favorite restaurants, and none of them have toys.

“We’re not a big fast food kind of a group. They eat hamburgers if we barbecue them at home,” she said.

When they go out, they prefer spots like Norman’s Scratch Kitchen & Cocktails, where coffee-rubbed pork loin shares menu space with vegan dishes like veggies and quinoa. (However, Scratch does offer a kids menu, just in case someone has to have chicken tenders and french fries.)

When they do ask for food, they usually want their mom to make Carib-bean chicken with onions, tomatoes, cilantro and lime juice over pasta.

“They have some old-school favorites,” Chaples said. “I have one that loves SOS (aka chipped beef gravy on toast).” 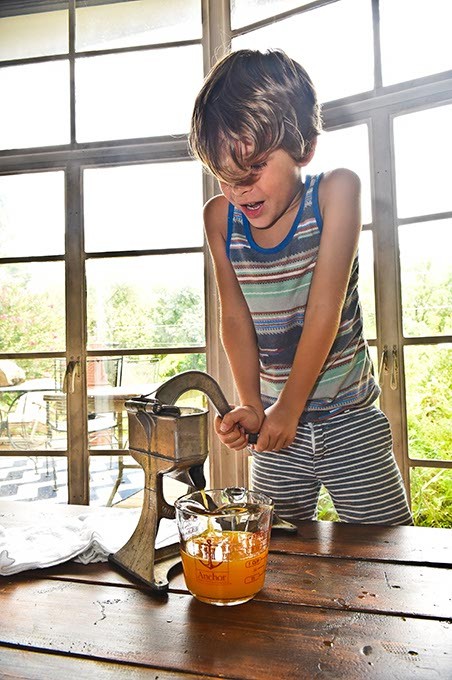 Still, there are some foods that kids just won’t like. Rather than give in completely, the parents still serve it but don’t require that everyone eats it.

“The more you throw it out there, the more they’ll try,” Chaples said. “I keep putting it on the table, and after a while, they realize it isn’t so bad.”

Two of her kids won’t eat bananas because of the texture.

Benny Castro has lost his taste for avocados, and he’s not too fond of kale, his father said.

Watts said she tries to add an artful look to the food to keep Jackson interested, a trick she learned from her “ultimate foodie” grandfather.

“My grandfather would make elaborate breakfast spreads after his favorite politician won or would create lines in his kitchen for us to create enchiladas,” she said. “Maybe the key for kids eating is making food an art. Isn’t that what a foodie is? We love the art of food.”

So don’t despair, parents. Even if your kid is asking for a cheese sandwich with ketchup for dinner, keep trying to feed him those greens and get her to try a bite of something new.

If nothing else, they’ll eventually get too weak and hungry to fight you, and then it’s time for escargot.