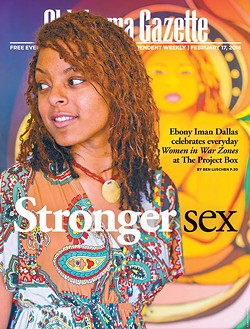 The Oklahoma City artist’s new exhibit, Women in War Zones, runs through Feb. 27 at The Project Box, 3003 Paseo St. The collection, featuring 15 or so works by Dallas, highlights women who have courageously taken on daunting challenges — be it the Taliban or breast cancer.

Dallas said the centerpiece of the exhibit, “13 Queens,” was inspired by the bravery of the women who came forward and testified against former Oklahoma City police officer Daniel Holtzclaw, who was given a virtual life sentence in January for multiple counts of rape and other sexual abuse charges.

Dallas feels personally connected to that case and other cases of police misconduct. Police killed her birth father, Said Osman, in his Oklahoma State University dorm room. He was a native of Somalia in East Africa.

He never met his daughter, who was born months later. Growing up, Dallas spent years trying to connect with the part of her she never knew.

“When I hear about others who have experienced police brutality, it makes me want to do something that I couldn’t have done for my father,” she said.

The woman depicted in “13 Queens,” like most other women portrayed in the collection, is almost cloaked in a pair of bright, vibrant wings.

The collection is a very personal one for Dallas. She said each work has bits and pieces of herself somewhere within — either through a personal connection or an emotional one.

The artist has spent her life trying to spread her wings and become whole in a world where part of her remained a mystery. She never imagined where those wings would take her. 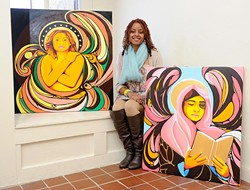 Strong women run in the family. Viola, Dallas’ mother, lost her father in a car accident when she was 4 years old. Born and raised with six siblings in a small home, she watched her mother do her best with limited resources to look after the large brood.

“She worked as a maid, and she took pride in what she did,” Viola said. “At that time, there were not many opportunities, but she made sure that we were secure and well taken care of and provided for.”

Viola’s mother also instilled in her a faith in God that would help her navigate one of the darkest times in her life.

Within just a few months, Viola was forced to face the tragic loss of Said as well as the deaths of a brother and close cousin in separate incidents.

Dallas’ birth father died when Viola was just a few months pregnant. Dealing with such tremendous and significant loss was not easy, but the opportunity to carry and give a good life to her son and new daughter gave her hope for the future. There was too much at stake to feel powerless.

After Said’s death, Viola was given all of his photos and some other belongings. She never met his family in Somalia, but she did receive a few letters from them. Viola kept the letters and pictures as a link to a past she knew Dallas would be curious about. When Dallas was of age, her mother handed all those mementos to her daughter for her to do with them as she wished.

“It was enough information for her to know his side and her heritage,” Viola said.

When Dallas was 2, Viola married Wayne Dallas. Both mother and daughter said they were thankful to have him in their lives, not only as a provider but as a loving husband and role model.

Despite the love from her family and the heirlooms she kept from her birth father, Dallas always felt a part of her was missing. The parents she knew had long, well-established roots in Oklahoma, but a piece of her came from somewhere far and foreign.

Dallas always hoped to reconnect with her birth father’s family someday. With odds so long and a desire so strong, she sent letters to Oprah Winfrey in hopes the queen of television could somehow work a miracle. She never received a response.

Graduations from Edmond Santa Fe High School and the University of Central Oklahoma (UCO) came and went without any indication Dallas or her lost family would unite. After college, she came to accept the idea that she would never meet her father’s family.

Right after graduating from UCO, Dallas took a job as an art director for an Oakland-based advertising firm she interned at the summer before. She moved to California with her younger sister, Krystal.

Without many other friends of their own in their new state, one January night, the pair visited a San Francisco dance club.

Upon entering, a man struck up a conversation with Krystal. Dallas noticed his friend looked East African. She asked him where he was from. At first, he seemed uninterested in the conversation, but his interest was piqued when she mentioned her father was from Somalia, his own home country.

The man, Hakim Gulaid, asked Dallas where her father was now, and she told him. When he learned she’d just moved to California from Oklahoma, Gulaid lit up.

“I know your family,” he said.

The chances of meeting any one person in a random club who knew one particular family in a faraway country left Dallas skeptical. Gulaid said he knew her dad came to America for school and he was killed in his dorm room.

He gave the right answer, but Dallas already knew it was true. She hugged Gulaid and at last wrapped her arms around an elusive part of her identity.

As Dallas searched for her heritage from home in Oklahoma, her father’s family tried as hard or harder to locate the living link to their lost son.

They knew Said had a daughter named Ebony who they believed was born in May, but the Somalian family never had an opportunity to meet Viola.

After that night in the club, Gulaid told Dallas that her birth father’s mother, Amina Jama, was in Oakland in 1998, before Dallas even considered moving to California. While there, Jama told Gulaid — whose father was best friends with Said back in Somalia — to help her find Dallas.

Dallas’ grandmother hired a private investigator in Oklahoma, but much of the vital information she provided him with was inaccurate. Since her mother’s marriage to her adoptive father, Ebony’s last name was legally changed to Dallas. Jama didn’t know.

Coincidentally, one of Dallas’ aunts also contacted The Oprah Winfrey Show about the search for her brother’s lost daughter. She also never heard back from them.

“If only they had been able to connect the dots,” Ebony said. “It was all right there.”

Just a week after meeting Gulaid, Dallas was on the phone with aunts and uncles calling from around the world.

“I would be at work and get a call and just have to leave the room,” she said.

Four months later, Dallas boarded a plane to New York to meet her aunt Muna Basbaas, who lived there with her family. The following Christmas, she flew to London and Kenya to meet the rest of her family.

Later, she traveled to Somalia.

Before Dallas met her father’s family in the traditionally conservative Republic of Somaliland, she was nervous about what they might think of their nose-pierced, tattooed American relative. She also had personal regrets about missing out on so much with them already.

“When we met, it was like all of that just melted away,” she said. “The transition was very easy; it was very smooth. It was almost like we knew each other all along.”

She has returned to Somalia at least half a dozen times.

Basbaas, Said’s sister, said reuniting with Dallas finally gave the family closure in her brother’s death. The news of his death crushed Said’s mother’s spirit, especially considering it happened so far away from her.

“My mother died, basically, you know what I mean?” Basbaas said over the phone from Claremont, California, where she now lives. “Now I know, because I’m a mom and I know the feeling, but we couldn’t understand why no one was allowed to talk about it or we don’t have any pictures of him at home.”

When Basbaas first met Dallas, she was everything she always thought she’d be. They noticed an immediate bond.

People outside the family, she said, are surprised to learn they’ve only known each other for about 10 years. It’s like Dallas was born in Somalia.

“Honestly, when you look at her, when you’re with her, you never think she is not from there,” Basbaas said. “My kids are more foreign than she is when we’re in Somaliland. She’s the one where you think she’d been living there her whole life and my kids are hiding behind her.” 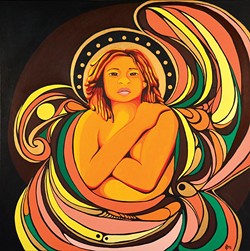 She earned a master of fine arts degree from California College of the Arts, and the Basbaas and Dallas families were there to see her cross the stage.

Though Basbaas had only known Dallas for about five years at that point, seeing her graduate was an unforgettable moment.

“To be honest with you, it’s like we’ve known her — honest to God — for all our lives,” she said.

Dallas’ mother said she was at first emotionally shaken to learn her daughter reconnected with her birth father’s family, but after visiting with Basbaas, she realized contact with her African family does not diminish the love Dallas has for her American one.

“There was still something missing [for Ebony growing up], and I think this filled the void for her,” she said.

In 2010, Dallas founded Afrikanation Artists Organization, a nonprofit based in Somalia. It helps African artists overcome challenges by providing them with supplies and venues in which to display their works.

“I’m just grateful to have a very large, very supportive, very loving family on all three sides,” she said. “I don’t take any of them for granted.” 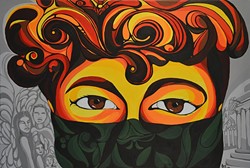 Print Headline: Drawing connections, Artist Ebony Iman Dallas discovered her roots in a way too strange not to be true.