In 2012, around 300 participated. What began as a one-day amateur race has since grown into an official USA Cycling Pro Road Tour event, and its June 3 competitions will draw professional riders from across the globe.

Cornett said he anticipates TenaCity will be “an amazing weekend to be in Oklahoma City.”

TenaCity was added to USA Cycling’s pro tour schedule in 2016.

Cornett also cited the OKC Pro-Am Classic and TenaCity festival expansion and the recent opening of Riversport Rapids and the Olympic whitewater kayaking trials at that venue as further evidence of OKC’s “destination city” status.

The USA Cycling Pro Road Tour runs April through September and features more than 25 events in which cyclists build points race by race throughout the season as they compete for championship and other awards.

“Not only are we attracting local and regional teams, but we will attract the best riders in the nation,” said Chad Hodges, OKC Pro-Am Classic founder and race director. “They want to be here.”

Competitive Pro-Am races are divided into five categories set according to USA Cycling guidelines according to the rider’s level of experience and skill.

Cat 5 comprises those relatively new to professional cycling. Cyclists work their way to Cat 1 races as their proficiency and experience builds.

Event organizers are still seeking volunteer course marshals to help control spectators and riders along the routes. Hodges said that volunteers are needed. Learn more about volunteer opportunities at oktenacity.com.

“I had many of the pro guys come up to me afterward and say that they’d never raced in anything like this,” Hodges said of the H&8th-tied race route. “They were impressed with the size of the crowds and said that they would be back.”

Due to the skill level of professional competitors, the Pro-Am features some of the fastest cycling OKC residents can witness, Hodges said.

“For any of our Pro-Am courses, the pro racers will probably average between 28 and 32 miles per hour,” Hodges said.

Bergman said each of them supported what Hodges was doing with DNA Racing and were eager to collaborate.

Loosely translated from Italian, Gran Fondo means “big ride.” Launching the morning of June 4 from Film Row, riders of all ages and capabilities can chose between recreational, self-paced 12-, 30- and 58-mile courses that take participants through several of Oklahoma City’s most popular districts and neighborhoods.

“I’m most excited about the 12-mile district tour because it will take you through the Plaza, Paseo and Uptown 23rd districts,” Hodges said. “The Gran Fondo ride will bring more people into cycling. … It’s a cool opportunity for people to see what else is out there.”

Organizers encourage families and people of all ages to ride and enjoy whatever tour they find the most attractive.

Gran Fondo rides launch from 726 W. Sheridan Ave. and include mid-ride rest stops and post-ride food and refreshments to participants. After the ride, they can stay and watch the June 5 OKC Pro-Am Classic races, which also launch from Film Row.

“We are excited to be a part of TenaCity,” said Angela Jones, YMCA of Greater Oklahoma City director of health and wellness initiatives.

Learn more about TenaCity at oktenacity.com. 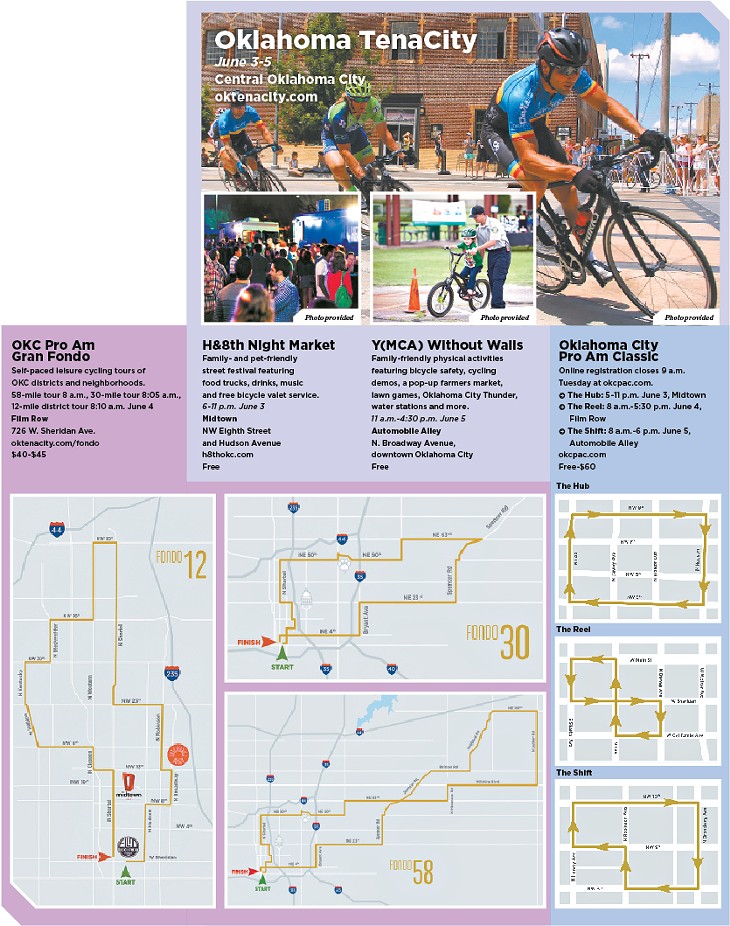