“Today is a Dust Bowl of a different sort,” Chuck D said. “You have a political climate that’s akin to a Dust Bowl, and it’s swirling in the minds of confused Americans.” 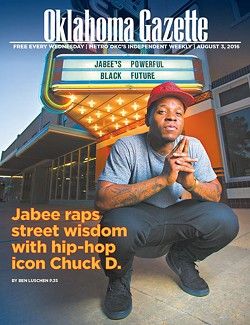 Jabee is warm and approachable. He isn’t tall, and his recently trimmed frame contributes to him looking more like a tattooed college kid than a grown father of two. But his knowledge runs deep.

Broad-shouldered Chuck D, on the other hand, speaks in a bellowing monotone dense with decades of voluminous wisdom. He is a Rock and Roll Hall of Famer with three platinum albums under his belt. Rolling Stone’s seminal 100 Greatest Artists list ranks Public Enemy at No. 44. That said, commercial success is not why Chuck D is an imposing figure.

His is the voice behind the politically and socially charged music act that called out American pop-culture relics Elvis Presley and John Wayne as “straight up racist” in Public Enemy’s powerful and enduring hit “Fight the Power.” In recent months, the New York musician also called Donald Trump a “clown,” Hillary Clinton a “liar” and former NYC mayor Rudy Giuliani’s continued presence a “nightmare.”

Chuck minces no words, a fact an Oklahoma Gazette reporter kept in mind when he joined the artist for a late June interview inside The Granada, a theater in Lawrence, Kansas, ahead of recent Public Enemy gig.

There is some solace in knowing Jabee well, about being prepared to discuss why Jabee’s Black Future feels like the one of the most ambitious albums any Oklahoma rapper has created — or how huge and generous a gift Chuck D’s work on the project really is, or how respected Jabee is locally for his own generosity in the northeast Oklahoma City community he proudly represents.

Instead, Chuck D just shook his head. Two minutes into the interview, he cut to the point.

“You guys had Woody Guthrie rapping out there,” he said of the politically outspoken Okemah-born folk musician.

“He’s the original rapper,” the Public Enemy frontman declared, as if Guthrie’s place in hip-hop history is as obvious as James Brown’s or Kurtis Blow’s.

In a “what’s now?” genre historically obsessed with geography, world-traveling Chuck D has little patience for the tight restrictions of time and space rap music often places on itself.

“The tie between Woody Guthrie and Jabee is not as distant as people think,” he said. 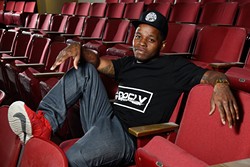 He read Malcolm X’s autobiography several times. While a student at Northwest Classen High School, he asked his social studies teacher Sally Kern, who coincidentally went on to become a state legislator, if she could tell him more about activist Huey P. Newton, who co-founded the Black Panther Party in 1966. Kern instead asked him if he meant scientist Sir Isaac Newton.

Jabee’s longstanding interest in civil rights and social activism explains why it bothers him when people claim he only addresses those issues now because they’re topical. His social and political truths were woven into his earliest songs and life experiences, and they still are.

In Black Future track “Flashes,” Jabee recalls an instance when someone he considered a friend called him an Uncle Tom because he perceived the artist’s fan following as largely white.

“How can I be an Uncle Tom when I was a kid who was homeless and never had anything?” Jabee said in a recent interview with Oklahoma Gazette. “I’m still from the eastside. I’m still the same person.”

Black Future is not solely about black issues or any one group, despite its title. Jabee said it’s about humanity — in the city and across the globe — at a crossroads. Which path will people chose in a world that feels increasingly chaotic?

Black Future was inspired by a poem of the same name written by his friend Najah-Amatullah Hylton. The narrated prose, broken into three tracks, creates the framework for the album.

“In the Black Future,” she says in the album intro, “there’s a place so dangerously absurd that words reemerge as our tools and our friends rather than by the means The Man condemns us to ignorance.”

Hylton was set to perform her work alongside Jabee for the first time at a 2015 gig. But the rapper never showed up.

Earlier that day, Jabee visited Penn Square Mall for a haircut before the show. He’s not sure why, but he felt like pulling up his sweatshirt hood as he walked through the shopping center.

Security guards soon stopped him and said they already warned him about wearing his hood up inside the mall. Jabee told them he arrived just a few minutes before and had not spoken to anyone. He said they must have him confused with someone else.

A crowd gathered as the debate continued. Not wanting to cause a scene, Jabee decided it would be best to leave the mall. He stepped onto an escalator, and a police officer grabbed him as soon as he got to the bottom.

He was not. Jabee was handcuffed and taken to jail for trespassing. As he was escorted out of the shopping center, a white woman wearing a jacket with the hood up walked past him as she pushed a stroller. Jabee spent 18 hours in jail, missing the show and the income he would have earned for doing it.

Jabee was released after paying bail — around $400. He maintains his innocence and said he didn’t pursue the matter because he was embarrassed and just wanted to move past it. Not long before his arrest, Jabee said in a TV interview that he had never been arrested, which he said was uncommon for too many people who encounter law officers in northeast Oklahoma City communities.

His night in jail helped put his career in perspective.

“All this cool stuff? It don’t matter, man,” he said. “In a way, it did help shape the album because it showed me I have so much more work to do and so far to go — not just for me, but for our city as a whole.” 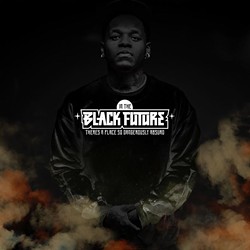 I’m the meanest man that ever had a brain, All I scatter is aches and pains. I’m carbolic acid, and a poison face, And I stand flat-footed in favor of crime and disgrace.

These are not lyrics found on Black Future. They belong to Woody Guthrie, though the opening lines to “Mean Talking Blues,” recorded in the 1940s, would be appropriate on any of the menacingly verbose projects by Eminem or Wu-Tang Clan.

Guthrie is perhaps best known as the musician who wrote the lyrics for “This Land Is Your Land,” but he was also a tireless troubadour and poet. He helped popularize the talking blues style, a type of vocal delivery that emphasizes rhythmic, narrative-driven speech. In many ways, Guthrie was more of a true emcee than some of today’s self-proclaimed rappers.

His legacy as an outspoken force against political and social injustices in the face of the Great Depression and Dust Bowl eras is not lost on Chuck D. The Public Enemy frontman said it is not an exaggeration to say Jabee and his contemporaries face comparable battles.

“Today is a Dust Bowl of a different sort,” Chuck D said. “You have a political climate that’s akin to a Dust Bowl, and it’s swirling in the minds of confused Americans.”

The two first connected after Jabee submitted some of his music to RapStation.com, a hip-hop focused multimedia “supersite” founded by Chuck D. They later exchanged direct messages on Twitter and eventually met at South by Southwest interactive festival in Austin, Texas, before Jabee finally approached him about contributing to Black Future.

In June 2014, Chuck tweeted that Jabee’s music “has the potential to change the world” — high praise from an artist who has literally changed the global musical landscape. But before any artist can affect the world, they first need to know they have a place to call home.

“It takes [Jabee] to acknowledge the community,” Chuck D explained, “but also a community to say, ‘This is a person who’s necessary, and whatever way that we can keep him in our community or just keep his mind in our community, we’ll make the way he makes his living possible.’” 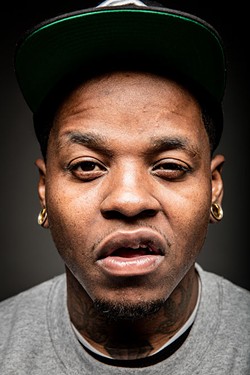 Jabee was headed to the studio to polish “Monument,” Black Future’s Chuck-assisted track, when his mom called and told him to come home right away.

“Pretty much the whole front of the house was just gone,” he said. “There were big holes in the wall. I’d never seen anything like it before, but I’ve never been in a fire either.”

[audio wav="http://okgazette.com/wp-content/uploads/2016/08/Monument-ft.-Chuck-D.wav"][/audio] An electrical fire, which began in an adjoining apartment, destroyed Jabee’s home and many of his possessions. Much of what didn’t burn had smoke or water damage.

There’s no good time for a house fire. In addition to finalizing his album, Jabee was scheduled to join Los Angeles indie rapper Murs on tour that weekend.

The child who grew up living in a series of temporary resting places with his mom found himself in a familiar situation as he crashed with friends or in hotel rooms.

While Jabee was on tour, the community he spent years contributing to returned the favor. Without saying a word to the musician, friends launched a GoFundMe crowdfunding campaign to support him. It quickly raised more than $4,500, exceeding its stated goal by more than $2,000. In late July, rapper LTZ, area artists and Power House bar also hosted a benefit show. Neo-soul and hip-hop band Bowlsey donated catered food.

LTZ said Jabee would do the same thing for anyone else in need.

“Ninety percent of our hip-hop scene is a direct beneficiary of Jabee’s hard work,” LTZ said. “If you’re his age or younger, he’s the one who took this type of music to where it is today.”

Jabee said the community response was inspiring and comforting.

“It almost brought me to tears,” Jabee said. “After that, I wish I could have just said, ‘Well, my album release show is going to be free.’ That would have been my dream, but it’s just impossible because stuff costs so much.”

Black Future feels like a project on the edge of something unprecedented from Oklahoma hip-hop, and the community is ready to help make that feeling a reality.

When he takes The Criterion stage Aug. 13 for his Black Future debut, it will be as a man ready to face the first day of the rest of his life.

“People will make sure to be at three things: your graduation, your wedding and your funeral,” he said. “For me, this is all three.”