There are many ways to get through the holidays, and an innovative use of spirits can be one of the most enjoyable.

We are in the thick of it, folks.

Thanksgiving is just around the corner. Then, the full-on push to Hanu-Christma-Kwanzaa comes on hard and heavy like an Oklahoma winter.

Wrapping yourself in layers of scarves and hats and gloves will only get you so far.

Some are holdovers from last year — the Moscow Mule with house-made cranberry-ginger beer is a favorite — and others, like his Autumn Sour, are new to the lineup at 5825 NW Grand Blvd.

A mix of dark rum, lemon and real maple syrup topped with honey foam, the sour hits each of Young’s criteria for a great cold-weather drink: seasonal ingredients, hearty brown spirits and an eye-catching presentation.

In the Raw owner Anna Mains agreed seasonal ingredients are key when developing a successful cocktail, and metro-area residents have become accustomed to having a wider selection of options at their favorite drinking establishments.

Her upcoming menu focuses more on robust spicing than the summer cocktail list, but it’s also about the smells and colors — using the drinks to embody the feelings that fall and winter inspire in guests.

Look for a ginger sidecar and a fall sangria on her list. Other cold-weather favorites, like bourbon milk punch and warm cider, will show up, too, but not every week.

She said In the Raw, located at 200 S. Oklahoma Ave., Suite 130, has learned to take Oklahoma’s wild climate shifts into account when deciding which drinks to feature. 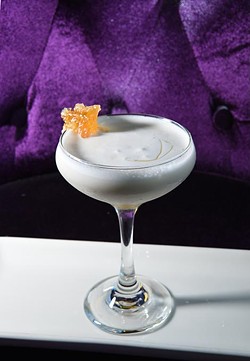 “People will come in for those heavier, really warming beverages when it’s down to 30 degrees,” she said. “But then we’ll have a week when it’s back up to 65 and nobody is interested in them.”

Mains said conceptually, bartenders have to think along a broader spectrum.

“It’s about where you want people to go,” she said. “That’s what cocktails are; they’re an escape. So much more than a simple drink.”

Getting people interested in wine isn’t hard, no matter the season, said Patrono Italian Restaurant’s general manager Brian Cure, but the dishes paired with the bottles do get heavier at its 305 N. Walker Ave. location. 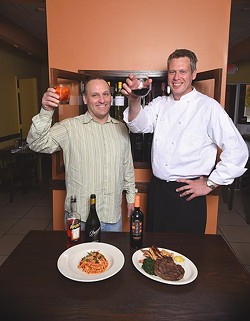 “We’re selling a lot more of the rib-eyes as it’s gotten cooler,” he said. “Usually, we pair it with a Barolo. All of our wines are Italian, and they’re more unusual names than not.”

What makes a great winter wine truly depends on what a customer enjoys most of the time, Cure said. People might drink more reds as temperatures plummet, but that doesn’t matter if a customer doesn’t like red wine the rest of the time.

Instead, Cure guides diners toward a varietal they’ll enjoy based on their other tastes.

At O Bar, 1200 N. Walker Ave., cocktails tend to be the icing on top of the seasonal cake, said beverage manager Jeffrey Cole.

Nearly two years old, the venue is built on a solid selection of fine wines and liquors, and cocktails are where O Bar’s seasonality can shine.

“First and foremost, if you’re not thinking about your menu seasonally, you’re not doing yourself or the local farming community any favors,” he said. “In the summer, it’s all about fresh ingredients. Going into winter, we really start thinking about what we can do without fresh fruit.” 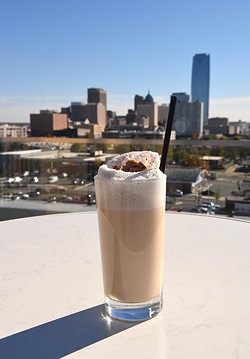 The winter menu is a showcase of preservation techniques. Bitters, vinegars and bushes are all touches mixologists can use to create drinks that feel right for the season.

“One thing we’re using is sorghum that we get from OKC Farmers Public Market. It really plays well with scotch,” he said.

Finding ingredients that play well together isn’t always easy, but Flint beverage manager Mindy Magers said the restaurant, located at 15 N. Robinson Ave., is putting the family spirit back in the holidays by getting input from each bar staff member for its seasonal cocktail list.

Two cocktails she is excited about are the Sour Mash (Bulleit Bourbon Whiskey, Luxardo maraschino liqueur, apple-pear shrub and Angostura bitters) and the Decemberist, which she describes as having “the warming gingerbread cookie feel without being a sweet drink.”

The Decemberist is another Bulleit bourbon drink, but this one uses Snap (a ginger liqueur), simple syrup, lemon, bitters and Cock ’n Bull Ginger Beer.

“Everyone has a hand in the menu, so it’s very cohesive and embraces the spirit of fall,” she said.

Another ingredient that fits the season are egg whites, which add weight and structure to drinks like the Caribbean Fizz and Sarah’s Sour.

Magers said flavor is front and center at Flint, and its drinks feature syrups, shrubs and fresh squeezed juices. But there’s also a focus on speed.

“A lot of people come in before Thunder games,” she said. “You don’t want to wait five or six minutes for a cocktail.”

While cocktails come together quickly at the bar, Young said it’s a long process to perfect the recipes that end up on the menu at Cafe 501. Well before fall begins, bartenders work to create the right flavors for chillier weather.

That’s important, he said, because drinks aren’t just a signifier for the season — they’re also a survival technique.

Print headline: Season’s drinkings, As temperatures drop, warm your palate with the comforting flavors of the season.

Oklahoma City is home to many master mixologists, mad drink scientists in cocktail labs, brewing up beverages that’ll whet your whistle. Try your hand at home with our guide to seasonally appropriate ingredients. Then go to the bar anyway, because those folks are geniuses.

Booze: Go dark and warm: Bourbon, whiskey, scotch and rum are favorites, or infuse vodka or gin with seasonal touches with fruits and spices. Spices: Cinnamon, nutmeg and cloves are obvious choices, but many turn to herbaceous touches, like sage and rosemary, that pack a lot of flavor. Ingredients: Whether you’re infusing liquor, making a syrup or adding juice, the flavors of fall and winter are found in apples, cherries, pears and cranberries. And don’t forget those warm wintery treats with vanilla, honey and ginger — all great additions to your cocktail recipes.