Punk rock wunderkinds Peyton Bighorse and Kelli Mayo took us to the place they take all their visitors — only this time they were the out-of-towners.

They sat at a table next to a wall honoring David Bowie at S&B’s Burger Joint, 20 NW Ninth St., where they were joined by a reporter and a photographer from Oklahoma Gazette.

This unseasonably warm Saturday, the pair enjoyed a hometown visit and talked about their pop-punk sister act Skating Polly, their upcoming album release and growing up.

The band is “former” in both the sense that they are currently based out of another state — Washington — and that Peyton, 20, and Kelli, 15, are no longer children navigating their way through the indie music world. Together, they’re a car-driving, boy-chasing force to be reckoned with. 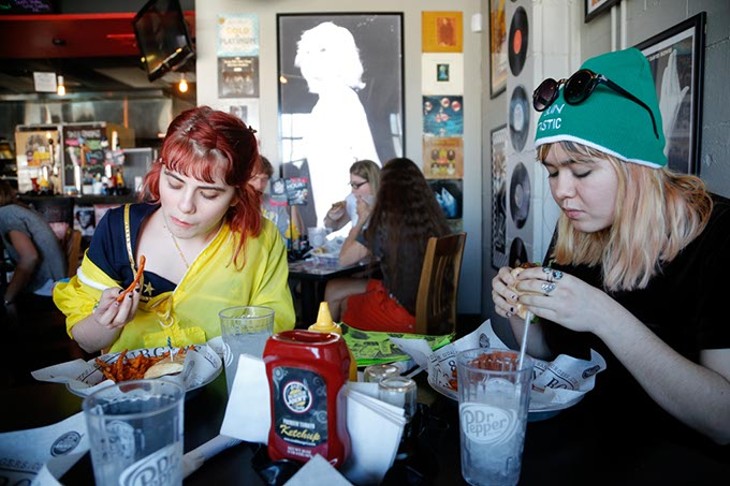 This was Skating Polly’s first trip to Oklahoma since their family moved to Tacoma, Washington, in October. They release their fourth studio album, The Big Fit, March 25.

On their return trip, Skating Polly had no plans to play a show. Instead, their goal was to reunite with family and friends. It’s the people, Bighorse said, that they miss the most.

It seems appropriate that a band varying tonally from personable eloquence to bursting angst would have grown up in Oklahoma. Skating Polly has long frustrated those insisting on putting the band into one restrictive genre. The Big Fit offers similar range to Skating Polly’s past work, but in a way that suggests mature artistic vision.

The sisters said they have not yet made too many friends in Washington. Musically and socially, it’s a little like starting all over again, though it helps to be in a location where so many of their musician friends are likely to stop in.

“It’s awesome because whenever I offer them a place to stay this time, it’s a legitimate offer because they’re going to come through,” Mayo said.

The duo ticked off other ways in which Tacoma and Oklahoma City differ. The weather in Tacoma is cooler and rainier. They can hike. The city is right on crystal-clear Puget Sound, a far cry from the murky, red dirt-tinted lakes they’re used to.

“I think every single one of us and our siblings have cut our foot on some old beer can in a lake,” Peyton said.

Even so, Kelli said she misses Oklahoma’s many lakes. A muddy swim in one is a rite of passage.

“It’s like once you do that, you can conquer anything,” she said.

Once at their new home, the sisters claimed the basement for themselves.

“That’s kind of like an apartment in itself; it’s totally our own,” Peyton said. “The whole space is ours. It’s great. There are days when we don’t leave that space except to use the bathroom.”

Their room, they said, is a work-in-progress. Polaroids hang from cement walls painted green. The open ceiling reveals fiberglass and piping. When they first moved in, water leaked onto the bed below when anyone took a shower.

It was ugly, but Kelli said they made it their own. Down there, it’s easy to get wrapped up in writing music or painting and lose track of where the day has gone.

“We forget to eat sometimes, we get so caught up with what’s going on down in our room,” Kelli said. 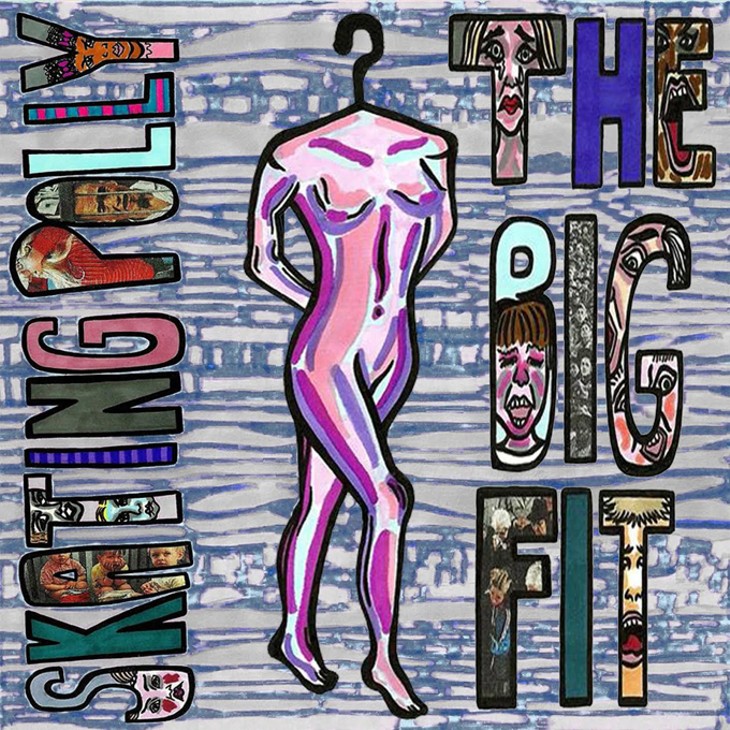 Peyton drives now, but in Oklahoma, she has no car. Still, she much prefers driving on our gridded streets.

In Washington, a higher number of pedestrians means more competition on the roads.

After Peyton and Kelli finished their meals, they headed outside. Next, they headed to Guestroom Records, 3701 N. Western Ave.

The sisters said they especially miss Guestroom, one of their favorite record stores. Shop staff certainly missed them. A round of high-fives were exchanged as Peyton and Kelli entered. Kelli asked if she could hang a neon-green flier in the storefront to promote an upcoming show by JBFC, her brother Kurtis Mayo’s band.

“They make the coolest posters,” she said. “I always try to make posters like this in Photoshop, but I just give up.” 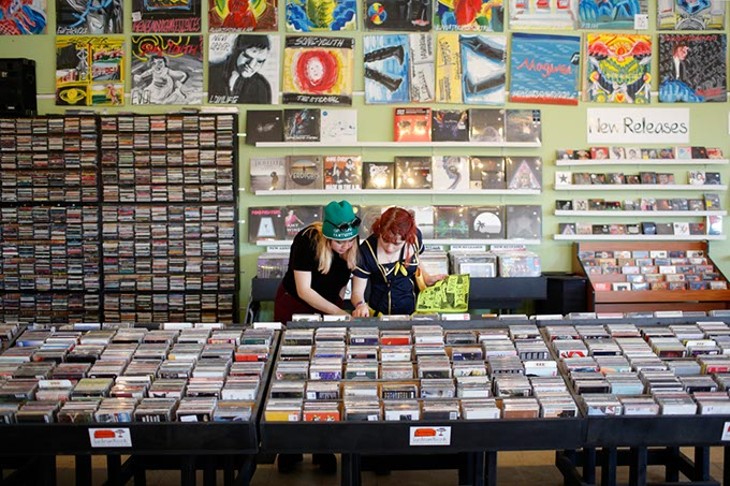 Kelli especially looks up to Kurtis, 18, whom she calls the “real music mastermind” in the family. He is perhaps the biggest supporter and musical influence in her life.

Skating Polly formed in 2009, when Peyton was 15 years old and Kelli was 9. They have since played with touring acts such as Babes in Toyland, The Flaming Lips and Band of Horses.

Be it a byproduct of who she was raised by or the unique experience of joining a band at such a young age, Kelli is well ahead of the curve in music knowledge for a 15-year-old.

She said her favorite 2015 releases were Brace the Wave by Lou Barlow and Rose Mountain by Screaming Females. She couldn’t pick an all-time favorite record but did say she’s always in the mood for Fiona Apple’s The Idler Wheel.

While flipping through vinyl, Peyton said she was a big fan of Sufjan Stevens’ 2015 release Carrie & Lowell. She also admitted she enjoys acts people might not expect from her, like Lorde and Jimmy Eat World.

The influence of Rose Mountain shows up on The Big Fit, as do softer moments more akin to Stevens. Any artist could be defined as a piecemeal assembly of his or her influences, and certainly the same applies to Skating Polly, a band that has been introduced to a wide range of music and made friends with heavily influential musicians.

Right before they moved to Washington, the sisters received a gift from punk act Babes in Toyland: VIP tickets to the Voodoo Music Experience festival in New Orleans. Also, the drummer for The Flaming Lips wore a Skating Polly shirt in a 2013 Hyundai Super Bowl commercial.

Even a passing mention of unorthodox, noise-hop band Death Grips registered with Kelli, who immediately identified their drummer as Zach Hill.

Don’t let her age fool you. Mayo thinks and speaks like an industry vet.

“I just don’t like it whenever people don’t make art and they have an ulterior motive,” she said. “That drives me insane.”

“I found [Belly’s] records when I was little and I really liked them, but I always liked Throwing Muses’ Limbo more,” Kelli said. “The other day, I was just totally worn-out and I put on Star by Belly. It’s genius.”

The pair headed to their next hangout for more treasure hunting. 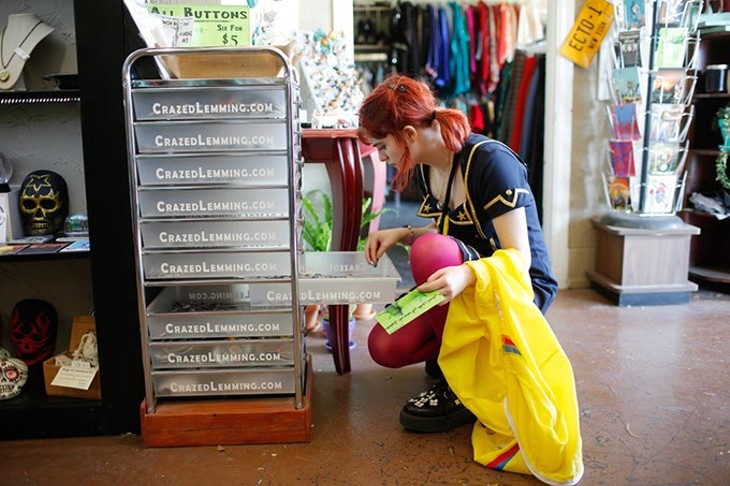 Kelli rummaged through jackets and dresses older than she is. Perhaps she was born in the wrong decade.

In many ways, they are no different from other young women having fun and following their passions. But being recording artists undoubtedly influenced their upbringing.

In 2009, Peyton practically begged Kelli to join Skating Polly. The 9-year-old was too small to play bass guitar, so she played tambourine. But once Kelli joined, she was serious and persistent.

She kept writing songs. Skating Polly’s popularity expanded beyond the walls of the girls’ home and the boundaries of state lines.

Kelli noticed more and more eyes were on her.

“I felt like we were a novelty band, so I just went through this phase where I wouldn’t tell people my age, or lie,” she said. “It was a pretty short phase, but it was just because I didn’t want people to like my music just because, ‘Oh, you have braces; you must be really young.’”

(She is now orthodontics-free, by the way.) She said she hopes their new project — easily the band’s most mature and complete project to date — finally helps them shed remaining notions that Skating Polly is anything other than a talented and hardworking band like those they perform with.

Peyton and Kelli said they can’t wait for Skating Polly’s first show back in Oklahoma: April 23 at Norman Music Festival, a chance to put their musically mature sound on the event’s main stage.

Peyton graduated high school and said she has no immediate plans for college.

“There have been times where I’ve felt really insecure about not going to college, but ultimately, it’s not for me,” she said.

Kelli is homeschooled in Tacoma. Formerly a student at Oklahoma City’s Classen School of Advanced Studies, she said she enjoyed going there but public schooling wasn’t compatible with working in a touring band. In seventh grade, she missed around 64 days of school.

Peyton and Kelli try their best to shrug off those who think they’re anything more or less than they are: two sisters making art together.

“I feel like we’re the least interesting people in our family,” Peyton said.

Not lost in that humility is self-awareness and respect for their accomplishments. There are musicians in their 30s who can’t claim multiple studio albums, a United Kingdom tour or the opportunity to meet and befriend their music idols.

If it was necessary to trade a “normal” childhood — whatever that means — for those successes and experiences, Kelli said it’s well worth it.

“I wouldn’t want to have it any other way,” she said. 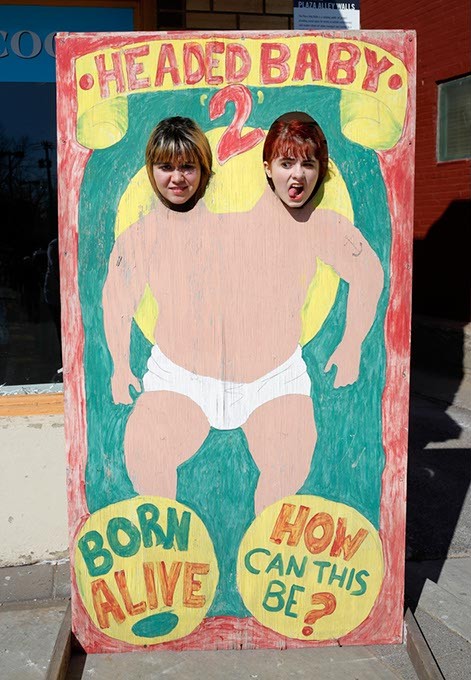 Print headline: Home grown, Returning to Oklahoma from their new home in the Pacific Northwest, Skating Polly reconnects with the spots that made them who they are today.