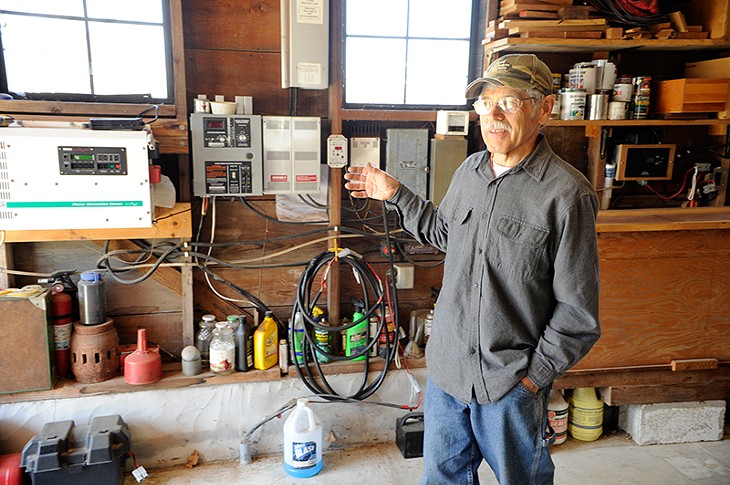 Off-the-grid living isn’t only for the purist. Urban dwellers can make small changes to lessen energy and water use while notably increasing self-reliance and sustainability.

Ron Ferrell used to live in an off- the-grid home, which he now rents to a young couple, in Jones. As he has gotten older, Ferrell said it’s now more feasible to implement some sustainable living practices within his current Oklahoma City residence.

“We have to learn how to blend the old with the new,” he said.

For instance, Ferrell is using less water through his garden’s “drought pod.” As described in his Mother

Earth News blog post, Ferrell found inspiration for this method after watching an online video of a keyhole garden formation in Africa. Moisture and nutrients are held together within a round bed or, in Ferrell’s case, a recycled 40-gallon plastic barrel. The “organic mass” in the barrel includes compost from food waste, hay and manure.

“Generally, whatever moisture is in my food waste is all I will need to add for a very long time,” Ferrell wrote for Mother Earth.

After planting directly next to the pod, the vegetation consumes moisture and nutrients through holes drilled in the barrel. Since planting near the pod in mid-April, Ferrell said he has grown “several impressive tomatoes.”

Along with the drought pod, Ferrell also conserves water by using greywater (discharge from laundry and other household-based water) for use outdoors. He is on the board for the new SixTwelve school, which will soon provide a live/work space for sustainable and creative practices in the Paseo Arts District. Ferrell also volunteers up to four days a week at the Kirkpatrick Family Farm in Yukon.

“I grew up on a fully functioning farm in western Oklahoma. We did everything: milked cows, raised chickens and had huge vegetable gardens,” Ferrell said. “I think it’s important to understand how to live a more simple life, how to grow food and be more resourceful.”

Ferrell sees Oklahoma City as a great place to live, as it has made water catchment systems, front-yard gardening and raising chickens on your property legal.

“A lot of cities aren’t as supportive of urban agriculture,” he said. 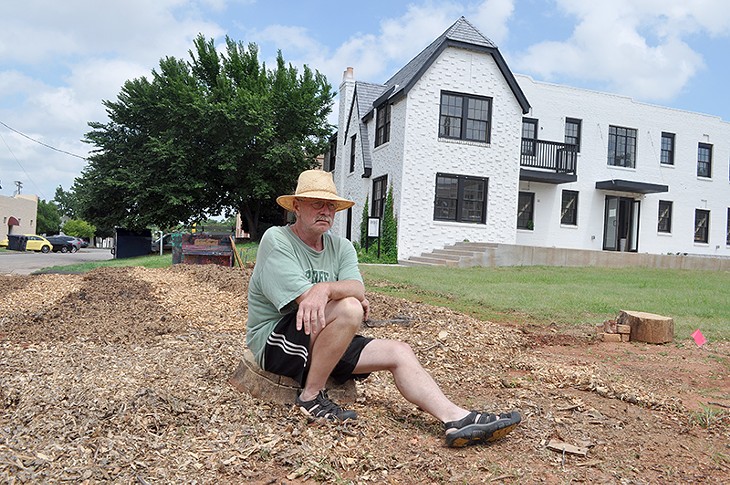 While Ferrell adapts these techniques to his urban environment, Barbara Hagen and Bruce Johnson are living as off-the- grid as possible in their home just north of Spencer.

Growing up in what he calls a typical Leave It to Beaver 1950s family, Johnson’s interest in self-sufficiency grew after experiencing the 1970s oil crisis. Hagen’s passion developed through her marriage to Johnson.

“It seems like today more than ever, we need to take a serious look at how we use energy, both for its finite availability and what it is doing to our environment,” Johnson said.

The couple lives in a 700-square- foot home, which, for them, isn’t as cramped as it might seem. The dwelling has a passive solar building design, or one that collects solar energy for heat during winter and lessens solar heat for the summer. Electricity comes from solar panels and a small wind generator.

“We use so little — in the neighborhood of 3 to 4 percent electricity that the average home uses,” Johnson said.

Energy consumption varies with how much is available. Most of the time in Oklahoma, the solar and wind energy is sufficient, but when they’re tight on resources, Johnson said they won’t wash clothes or run the vacuum cleaner.

“With the solar water, it’s dependent on the sun, and you have to go with the rhythms of that because the water isn’t warm enough in the early morning,” Hagen said.

The couple admits having no air conditioning in the summer can make things pretty uncomfortable, but they find ways to utilize the cool early mornings and evenings for work in the garden or cooking.

“People often forget that others have lived like this for many years,” Johnson said.

Outdoors, produce — including lettuce, kale, cilantro and broccoli — grows in a greenhouse. Summer months in Oklahoma make growing crops difficult, but when food is in excess, the couple shares freezer space with neighbors and stores through canning and dehydrating. While they don’t regularly go to grocery stores, they do shop some at Whole Foods and order things in bulk (which they divide with friends) from a local food center.

“We have neighbors that probably aren’t quite as far out as we are, but we have a little close-knit community where we share garden produce or help to look after each other’s homes and gardens,” Johnson said.

The couple understands not everyone wants to choose this way of living. That’s why they encourage urbanites to use sustainable methods that work best for them.

“It’s challenging and rewarding, like most things in life,” Johnson said. “Sometimes it’s not easy, and sometimes you can’t imagine life can be this good.”

1. To get started, try composting. It doesn’t cost anything.

2. Connect with Oklahoma City groups or individuals sharing your interests. Maybe it’s beekeeping or rain harvesting. Whatever it is, you’ll find someone else that’s just as passionate. Search social media for groups such as Transition OKC, Oklahoma Sierra Club or SixTwelve.

5. Find out how you can encourage PlanOKC’s community designs for more walkable, bike-friendly, healthy neighborhoods.

It’s not (always) easy being green:  No longer just a subculture lifestyle, aspects of off-the-grid living can be achieved even in an urban dwelling space and with varying levels of effort.