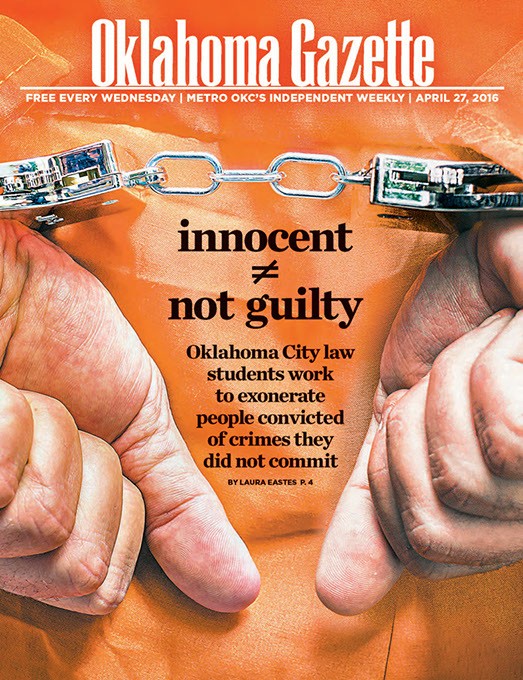 An estimated 2.3 to 5 percent of the nation’s prisoners are innocent of the criminal convictions linked to their name.

Last year, 149 people were either declared innocent or otherwise cleared of their convictions or guilty pleas, the most ever recorded, according to a report from the University of Michigan Law School.

Wrongful convictions challenge the idea of a legal system built upon truth, justice and fairness. But how can legal professionals rid the justice system of such injustice?

With the institution of the Oklahoma Innocence Project in 2011, Oklahoma City University (OCU) School of Law launched a campaign to redress these ills and provide hope to those wrongly convicted. As a member of the nationally known Innocence Network, the project evaluates post-conviction claims of innocence and plays a unique role in Oklahoma’s criminal justice system.

“There are always two sides to the story,” Shannon Walcher said.

Walcher, a third-year law student, points out that the public uncritically assumes the justice of criminal convictions. Often, it considers someone guilty until proven innocent.

“This has opened my eyes,” Walcher said, sitting in the clinic of the Oklahoma Innocence Project.

“When you go into these investigations, you find out about certain doubts eyewitnesses might have had. You see investigative procedures done in different ways. … This is an opportunity to represent real people that don’t have much hope in going forward in the post-conviction process without our help.” 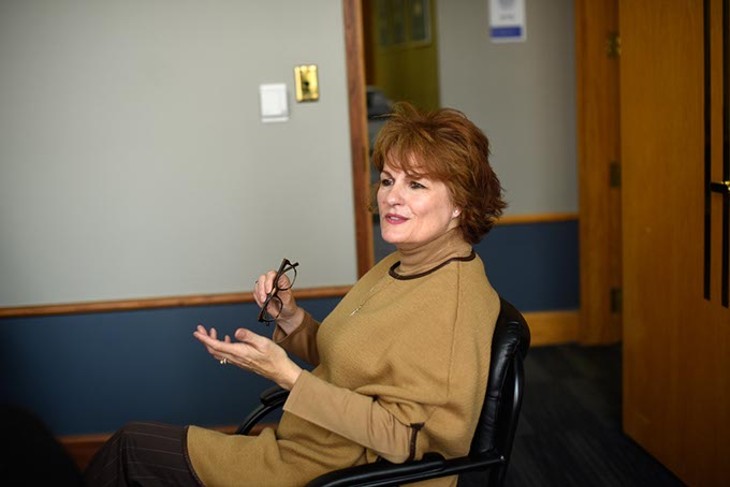 Earlier this month, the work of post-conviction relief made national headlines when a Virginia inmate was exonerated after more than 33 years in prison.

Keith Allen Harward was convicted of a 1982 rape and murder in Newport News, Virginia, but had always maintained his innocence. Two years ago, the Innocence Project — a founding member of the Innocence Network — took on Harward’s case and secured DNA tests on crime scene evidence, including a rape kit. The results excluded Harward and prompted a debate on bite mark evidence, which proved to be the most powerful piece of evidence in Harward’s trial.

In Oklahoma, 29 people have been exonerated since 1989, according to the National Registry of Exonerations.

In 2010, OCU law dean Lawrence Hellman told Oklahoma Gazette that at that time, Oklahoma had 18 incidents of people wrongly imprisoned. Additionally, the state ranked among the top 10 in the nation for the number of known wrongful convictions.

The statistics prompted action by law school leaders, who began raising the $1.5 million needed to operate an innocence clinic at the school for the first five years.

“When people see that this happens,” Hellman told Oklahoma Gazette in 2010, “I think they will want to help us put into place this clinical program where our students, working with professors and volunteer lawyers, will examine cases where there is a possible claim of innocence and a legal remedy that can be obtained.”

Well-known Oklahoma City attorney and former federal prosecutor Vicki Behenna advocated for an innocence clinic at her alma mater. She joined the staff as executive director in 2015.

“I’ve done a lot of things in my career, including high-profile cases,” Behenna said. “To be able to help provide a voice to someone who has no voice is an incredible opportunity and experience.”

“It spread like wildfire,” Christina Green said. “As soon as word got out about our opening through news outlets, we were inundated with letters from mothers, fathers, sisters, brothers and clients. Everybody just started writing. That first year, we had so many requests for assistance.”

Green was part of the first group of students to work in the project’s clinic in 2011. She graduated in December but returned as a project fellow. Following passage of the bar exam, Green was hired to continue working on the project in 2012.

Over 1,253 requests for help have reached the clinic since it opened. Submission of a request does not guarantee innocence; however, each request is reviewed after a client completes a 19-page questionnaire.

The project’s case criterion is clear: The applicant must have been convicted by either a federal or state court for crime(s) occurring in Oklahoma, and students must identify a viable claim of innocence.

Capital cases are not accepted because the Oklahoma Indigent Defense System, a state agency, guarantees counsel in those cases.

Cases opened meet the criteria and move to a waiting list for assignment to students. Typically, the clinic works through two to five cases a semester, but many of the cases carry over into the coming semesters.

Students commit 12 to 15 hours a week to the clinic with at least three hours dedicated to working in the clinic’s office housed at the law school. Research and interviews take students out of the clinic office and into county courthouses, police stations, law libraries and living rooms of key witnesses.

Research conducted by students can take anywhere from three to five years. A petition for post-conviction relief can include a lengthy brief followed by dozens of pages outlining various exhibits.

Then there is the litigation, which can take years.

“We always try to explain to our clients and their families,” Green said, “from the date we receive a letter asking for assistance to the day that we may potential get a ruling on their case can take between seven and eight years.” 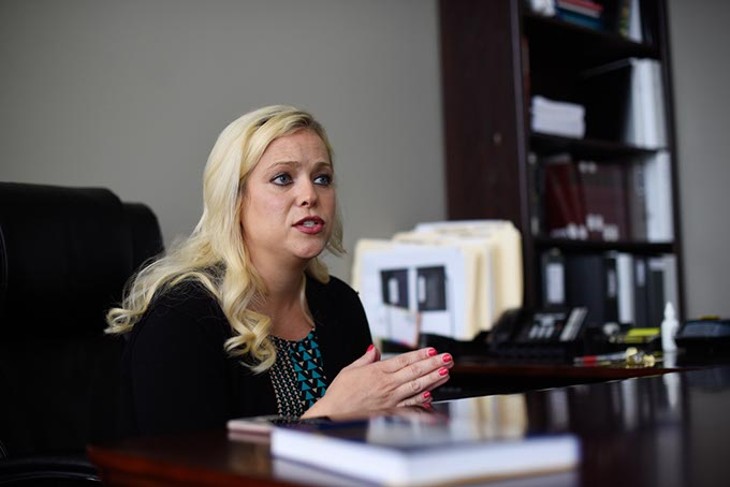 Four and a half years ago, Green and other students involved in the project’s clinic first read Malcolm Scott’s letter, a plea for post-conviction relief.

In 1994, 19-year-old Karen Summers was murdered during a drive-by shooting as she stood outside a crowded north Tulsa house party. Scott and Demarchoe Carpenter, both teenagers who attended the party, were arrested and charged of the crime.

Despite evidence in their favor, such as the murder weapon and car used to commit the crime discovered by police in another man’s possession, eyewitnesses told police the two teens were responsible for the shooting. Both Scott and Carpenter were convicted and sentenced to life in prison.

The case was atypical, Green said. A private investigator answered Scott and Carpenter’s pleas for help and re-examined the drive-by shooting in 2007. It was known that witnesses were willing to recant on the record by the time the newly established Oklahoma Innocence Project received Scott’s letter.

“That was clearly enough to get my interest sparked,” Green said, referring back to the initial work she conducted as a student. “When we got into the case itself, we quickly realized those were true suspicions.”

Green’s desires to gather evidence and conduct countless interviews to prove Scott and Carpenter’s innocence strengthened after meeting with Scott.

“I left that prison visit so fired up,” Green said. “The passion inside of me was boiling. I just knew that I had to get out and do as much work as I could and as quickly as I could. I wanted their cases heard and, ultimately, exonerated.”

On Feb. 21, 2014, the project filed an application and brief for post-conviction relief of Scott.

A month earlier, the project secured its strongest piece of evidence. An attorney for the Oklahoma Innocence Project interviewed Michael Lee Wilson, the man police found in possession of the drive-by vehicle and murder weapon.

Inside an Oklahoma prison, Wilson confessed to firing the shots that killed the young woman in 1994 and identified the two other people in the car; neither was Scott or Carpenter.

Wilson was executed by the state for the 1995 slaying of a convenience store clerk days after the videotaped confession.

The confession was one of many pieces of evidence presented during a post-conviction relief hearing for Scott and Carpenter in Tulsa January 2016.

Holmes is expected to rule May 4 to order a new trial, deny their application for post-conviction relief or reverse their conviction and vacate their sentences.

The project is optimistic that the evidence presented in January proves Scott and Carpenter played no role in the drive-by shooting death of Summers. For the past 22 years, the men have claimed they were innocent. 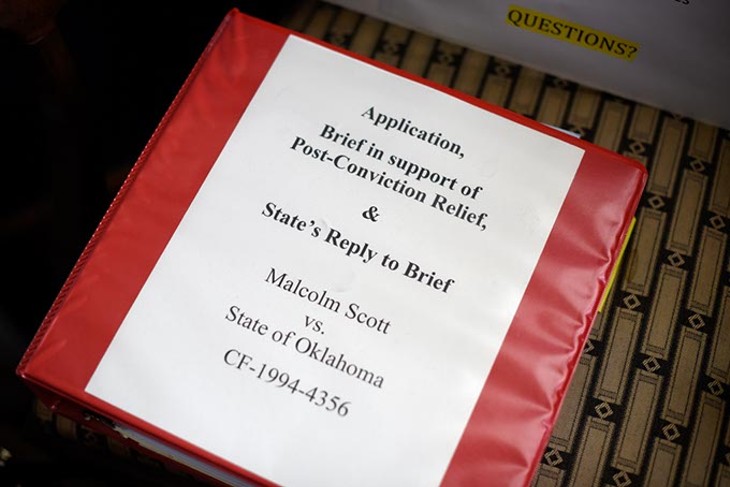 A case like Scott and Carpenter’s is a prime example of the momentous work conducted by the project’s staff and students.

This semester, six students are working on behalf of the wrongfully convicted in the state. Currently, students are researching three active cases. In addition to Scott and Carpenter’s cases, one other case is in litigation.

“Its not a case in a case book or a fictional fact pattern that we are working through,” said Courtney Zamudio, a third-year law student who plans to pursue a career in prosecution. “This is a real person’s case, and these are real people we are interviewing.”

The Oklahoma Innocence project ranks small when compared to other members of the Innocence Network. In total, three staff members and a handful of students work on the project during a semester.

Project leaders hope to see it grow and work to prove the innocence of more clients.

After all, in any system of justice, there is an inherent risk that innocent people might be wrongfully convicted of crimes they did not commit.

• The Oklahoma Innocence Project opened in August 2011 at Oklahoma City University School of Law. The project works toward exonerations of the wrongfully convicted in Oklahoma.

• The project is a member of the Innocence Network, an affiliation of organizations providing pro bono legal and investigative services to clients seeking to prove their innocence in crimes for which they have been convicted.

107 cases waiting to be assigned to students